This article details an algorithm and associated sample code for software occlusion culling which is available for download. The technique divides scene objects into occluders and occludees and culls occludees based on a depth comparison with the occluders that are software rasterized to the depth buffer. The sample code uses frustum culling and is optimized with Streaming SIMD Extensions (SSE) instruction set and multi-threading to achieve up to 8X performance speedup compared to a non-culled display of the sample scene.

The occlusion culling sample has been optimized with Intel® Advanced Vector Extensions 2 (Intel® AVX2) instructions to improve the time spent in the culling pass. The Intel® Core™ m7-6Y75 processor is a dual-core 4.5W processor. Table 1 compares the performance of the Intel® Streaming SIMD Extensions 4.1 (SSE4.1) version to the AVX2 version on this processor. The cull time varies with the scene and with the resolution of the depth buffer. AVX2 reduced the cull time by up to 1.32x.

The resolution of the depth buffer is a parameter that can be varied to control the CPU budget for occlusion culling. Table 1 shows that reducing the resolution from 1920x1080 to 320x192 reduces the time from 7.80 ms to 1.90 ms. Tuning such a parameter must be considered for games that are designed for low-power systems. The m7 6Y75 processor operates at the same power level as tablets and is capable of running a desktop operating system such as Windows* 10. Therefore any game that can run on Windows has the potential to also run on these systems, if the game content is scaled to fit the smaller power budget accordingly.

Occlusion culling is commonly used to improve performance in games. While this can be done on the GPU, this sample provides an alternative to run the culling on the CPU. Culling geometries on the CPU can bring additional benefits over culling them on the GPU. The GPU is often a bottleneck in games and running this on the CPU can alleviate GPU bottlenecks, as well as save the cost of submitting occlusion queries to the GPU. This submission cost includes the Direct3D* API calls and the memory transfer between the CPU and GPU of the occluders.

This update consists of two additional rasterizer optimizations, which were implemented by Fabian Giesen and have been integrated into the sample. These optimizations improve performance in terms of frame rate by roughly 13 percent and in terms of total cull time by about 27 percent. For more details, see https://software.intel.com/content/www/us/en/develop/blogs/software-occlusion-culling-update-2.html.

This update consists of new features and optimizations, which have reduced the total cull time and the total frame time by factors of four times and two times, respectively. For more details, see https://software.intel.com/content/www/us/en/develop/blogs/software-occlusion-culling-update.html.

Any realistic 3D scene contains objects that are at least partially occluded. For example, buildings and the environment typically occlude a large number of objects in the scene. The z-buffer is the last stage in the rendering pipeline where object fragments can be identified as occluded. However, occluded objects are still sent to the GPU for rendering, to no visual effect. If we can lower the computational cost of occluded objects, we can improve the application’s performance with no impact to the scene quality.

Using the GPU-generated depth buffer on the CPU is one technique for early detection of occluded objects. However, doing occlusion culling in this manner may cause latency and overhead issues and introduce visual artifacts since the GPU may be several frames behind the CPU. To avoid these problems, we propose software rasterization of the depth buffer on the CPU.

In this approach, we use the CPU to rasterize the depth buffer. Then, we use axis-aligned bounding box tests to determine if an object is occluded. Occluded objects are removed from the rendering pipeline to reduce overhead. We do not cull visible and partially visible objects; we submit them to the GPU for rendering. The sample code associated with the Software Occlusion Culling sample implements this technique. Additionally, in this sample, the software rasterizer is vectorized using SSE and multi-threaded to improve performance.

Occluders: Objects that are sufficiently large to hide or occlude other objects in the scene.

Occludees: Objects that are hidden, or occluded, by other objects in the scene. 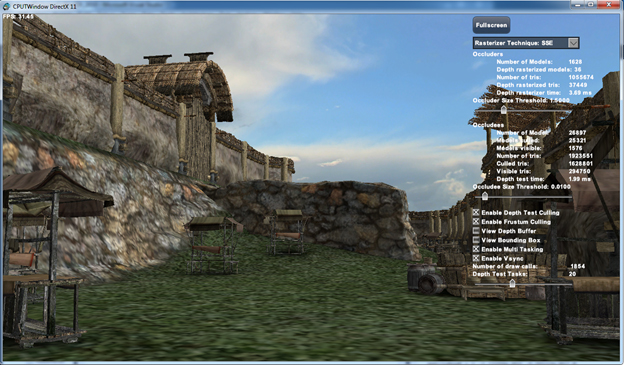 The occluders in the scene are rasterized to the depth buffer on the CPU. Figure 1 shows a screenshot of the Software Occlusion Culling sample. The castle walls and the ground plane are considered as occluders in the scene. The castle walls along with the attached tiny wooden trim and decorations are used as occluders to avoid special pre-processing of the art assets. Ideally, it would have been better to hand pick just the large castle walls as occluders, but we wanted to make sure that the software occlusion culling algorithm worked with a realistic scene without the need for expensive content changes.

We use object space axis-aligned bounding boxes (AABBs) to depth test the occludees in the scene against the CPU-generated depth buffer. The depth test algorithm treats all objects in the scene including the occluders (castle walls and ground plane) as occludees. Using AABB makes the depth tests more conservative. If the AABB is occluded, then the object contained inside it is also occluded and can be culled. If the AABB is visible, then the assumption is that the object contained inside might also be visible. However, as the bounding box is conservative, this assumption may not always be true, and we may have some false positives.

Ideally, if the camera is inside the AABB, the bounding box should be clipped and the portion of the object in front of the camera should be processed. However, we do not have a clipper stage implemented in the sample. Therefore, if any of the occludee bounding boxes is being clipped by the near clip plane, then we trivially accept the occludee as visible and send it to the GPU for rendering.

However, we store 1/w instead of the homogenous coordinate w to avoid divide by w at multiple locations in the rasterizer.

There were several optimizations implemented in the Software Occlusion Culling sample.

Figure 1 shows a screenshot of the Software Occlusion Culling sample.  The sample has several user interface elements that allow you to inspect and change the behavior of the sample.

Use the Rasterizer technique drop-down list to choose between scalar and SSE versions of the algorithm. 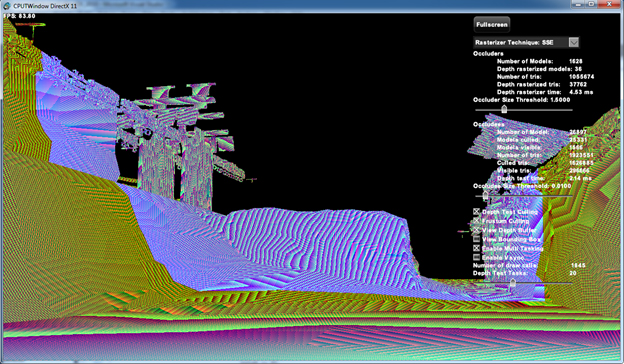 The Occluders section in the GUI provides information about the occluders in the scene.

The Occludees section in the GUI provides information about the occludees in the scene.

The View Bounding Box checkbox enables / disables the drawing of AABBs for the occluders and occludees.

The Multi Tasking checkbox enables / disables multi-threading in the sample.

The Vsync checkbox enables / disables frame rate clamping in the sample. If enabled, the sample frame rate is clamped to 60 FPS.

Use the Depth Test Tasks slider to vary the number of tasks created by the task manager to depth test the occludees in the scene.

The performance for the Software Occlusion Culling sample was measured on a 2.3 GHz 3rd gen Intel® Core™ processor (Ivy Bridge) system with 4 core / 8 threads and Intel® HD Graphics 3000. We set the rasterizer technique to SSE, the occluder size threshold to 1.5, the occludee size threshold to 0.01, and the number of depth test tasks to 20. We enabled frustum culling and multi-tasking and disabled vsync.

Table 1: Performance for SSE version. Frame rate is frames per second (fps) and frame time is in milliseconds (ms).

We would like to further optimize the Software Occlusion Culling sample as follows:

Here are some release notes for the sample:

Intel, the Intel logo, and Core are trademarks of Intel Corporation in the US and/or other countries.