Protein structure prediction (PSP) methods developed in the field of computational biology aim to predict the three-dimensional structure of a protein from its amino acid sequence. This is essential for several applications, such as drug design and the design of novel enzymes1.

The motivations to optimize Profrager include the following:

Hybrid parallel computing architectures composed of multi-core and many-core processors based on Intel® Xeon® processors and Intel® Many Integrated Core Architecture have the potential to speed up computationally intensive applications in diverse fields. The contribution of this case study is to leverage knowledge about the efficient utilization of this hybrid parallel computing architecture by describing the optimization developed on the Profrager code.

Profrager is implemented in C++ with Standard Template Library (STL) and with two main parts: input data reading and fragment library creation. The algorithms that compose each part are described in a high-level language:

To optimize Profrager we use an already-deployed hybrid parallel computing architecture composed of multi-core and many-core processors, and a workload with two examples.

The computing infrastructure is composed of a server deployed at NCC (http://www.unesp.br/portal#!/gridunesp) that has two Intel Xeon processors with hyper-threading enabled and four Intel® Xeon Phi™ coprocessors (Table 1).

The workload is composed of two input data sequences developed by LNCC called T0793 and T0820, with 593 and 140 amino acids, respectively. The original version of Profrager is sequential and uses only one core for each execution. The results show that Profrager may have performance gains by fully utilizing all the computational resources provided by the server (Table 1).

Code optimization can be a challenging task due to the complexity of application code and due to the multi-level parallelism opportunities offered by hybrid parallel architectures. A performance analysis is essential to identify the optimization opportunities in the code and to provide information that can be used to guide the optimization. Typically, profilers are the tools that support this analysis, because they evaluate the code regions that are computationally intensive and also identify the possibilities to improve the performance of these regions3.

In order to execute the performance analysis of Profrager, we used Intel® Advisor, a profiler that supports developers in vectorizing code and developing parallelized code that uses threads. In this study case, we use two reports provided by Intel Advisor:

We started the survey analysis after configuring the project (Figure 2).

The survey analysis shows the loops and functions in which an application spends the most time. This information is used to identify the opportunities for parallelization. We use the Total Time and Self Time:

The survey analysis of Profrager loops (Figure 3) indicates that loop 1 and loop 2 have Total Time close to the execution time of Profrager and no Self Time. That means that the body of these loops has a great amount of work performed by inner loops; therefore, it represents a good candidate for parallelization because it has high granularity.

Figure 3: Self-time and Total time of functions and loops.

The suitability analysis helps to quickly predict and to compare the parallel scalability and performance losses for different possible threading designs.

Parallel scalability prediction is based on annotations and a variety of modeling parameters. Annotations have to been inserted as pragmas in source code as follows:

The loop in (Algorithm 4) illustrates how to insert annotations for suitability analysis.

We added annotations into Profrager main loops, so that Intel Advisor can experiment with the potential parallelism of such loops. This helps determine the feasibility of adding parallelism, before you add parallel code (Figure 4). 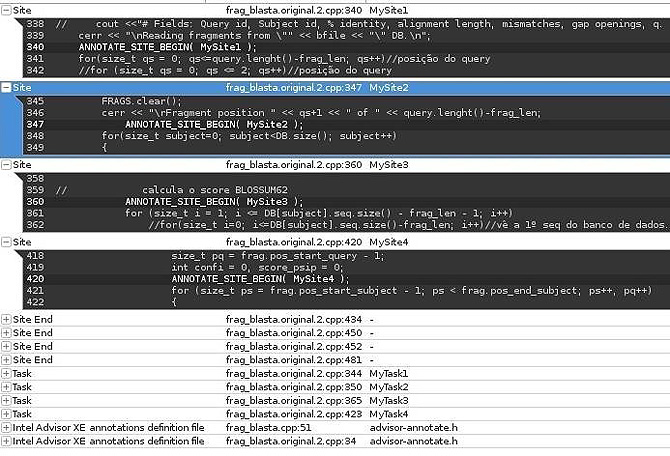 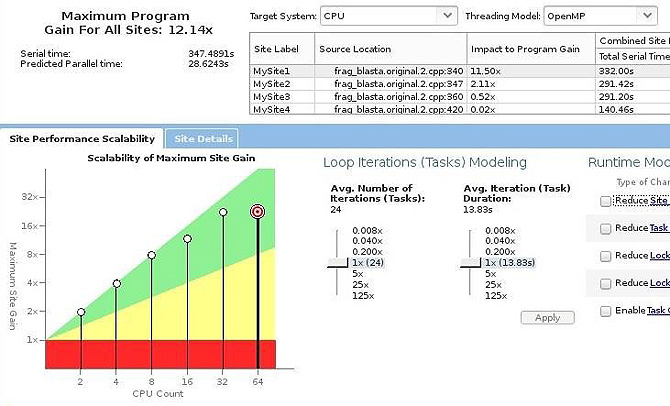 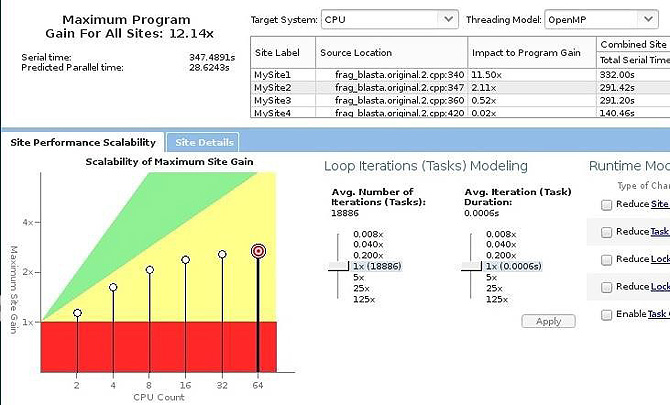 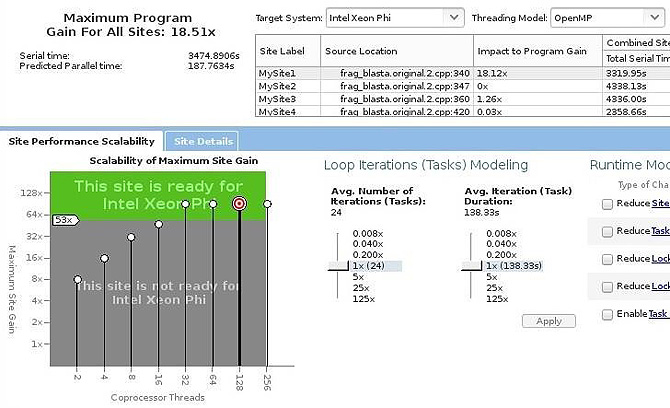 We parallelized loop 1, based on the results of the suitability analysis, using the computational infrastructure and workload described in Section 4. In this sense, we developed two optimizations called Multi-threaded and OpenMP/MPI.

We developed a multi-threaded version of Profrager using OpenMP that runs in Intel Xeon processors. This optimization was conducted by including the OpenMP directive: “#pragma omp parallel for” directive on top of loop 1. In this context, the iterations of loop 1 are divided among threads provided by the system (Figure 8). 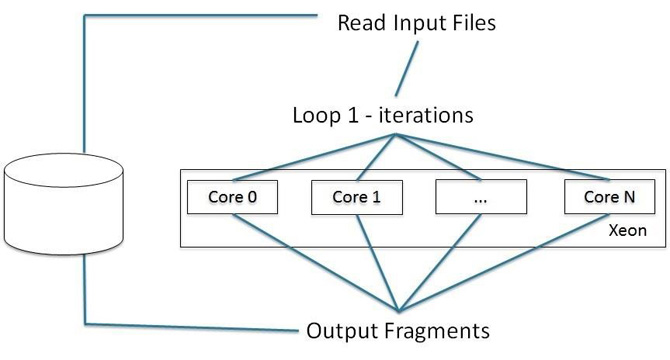 We developed a parallel version of Profrager combining MPI and OpenMP to balance the load between processor and coprocessors. This strategy was implemented using the following structure (Figure 9):

In order to evaluate the optimizations developed and to compare against sequential version we performed the following tests: 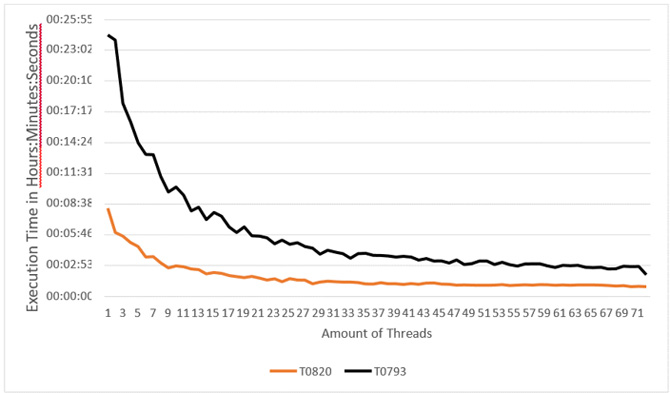 Figure 10: Evaluation of the multi-threaded Version of Profrager in Intel® Xeon® processor. 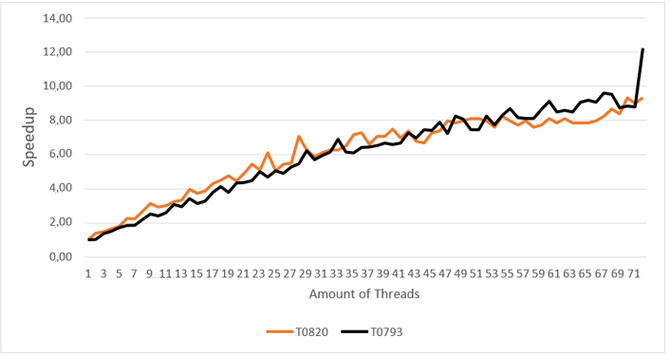 Figure 11: Speedup achieved by the multi-threaded version of Profrager in Intel® Xeon® processor. 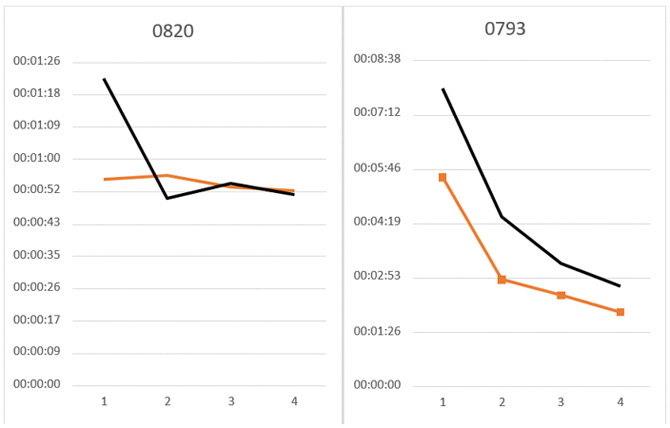 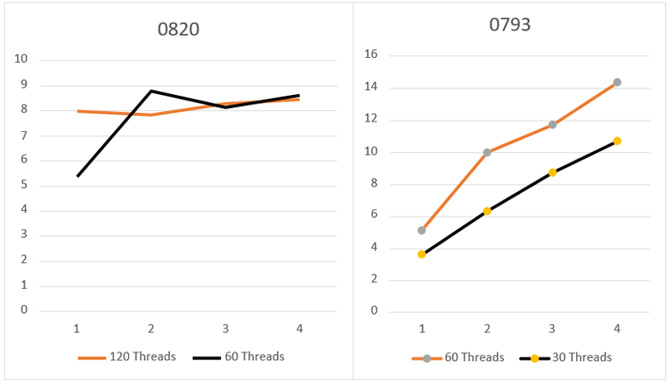 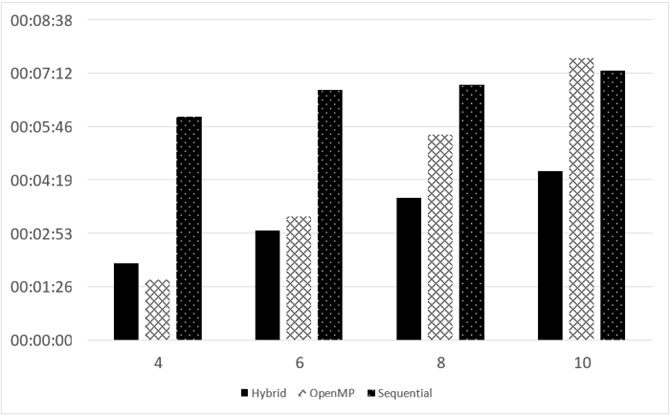 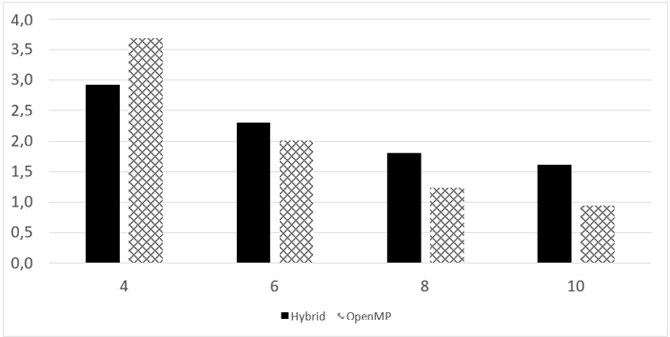 The tests executing several Profrager jobs show lower speedup, because the concurrency for computational resources increased (Figure 15). Executing part of the jobs on the Intel Xeon processor using multi-threaded optimization and part of the jobs on Intel Xeon processor and Intel Xeon Phi coprocessor using OpenMP/MPI optimization showed better speedup, because this strategy enables the balancing of load using all the resources available on the node.

Other aspects observed during the optimization of Profrager are:

The optimization of Profrager described how to exploit the full capacity of hybrid parallel architectures with minimum modifications in the code.

This new version of Profrager presents the following advantages:

We have plans to work on two future works. The first one will  parallelize other applications that compose LNCC workflows, and the second will explore the utilization of hybrid parallel architectures to minimize the execution time of workflows.

Supported by the Intel Modern Code Partner program, UNESP Center for Scientific Computing started in 2015 an action plan to establish a Parallel Programming Education Center focused on code modernization and dissemination of parallel processing concepts, aiming to collaborate on the transition to computing centered on parallelism. A series of training courses, workshops, and hands-on activities are being delivered targeting undergraduate and graduate students, academic researchers and practitioners, as well as engineers and developers from the industry sector.

Existing training material are being adapted, and newer ones being developed, to suit different needs according to the targeting audience, covering specialized areas of HPC and parallel computing with strong focus on parallelism and vectorization. The workshops cover a broad range of code modernization concepts and techniques, from the fundamentals of message-passing and shared-memory programming models through advanced performance optimization techniques for leading-edge HPC architectures.