The compute power of Intel® Processor Graphics is continuously growing with each generation. Each generation builds upon the last with increasing compute capacity in both fixed function and programmable execution units (EU’s). How do developers tap into this and effectively utilize the power of the platform to run GPU workloads in the most efficient manner?

This paper will detail the implementation of out of order queues, an OpenCL™ construct that allows independent kernels to execute simultaneously whenever possible, and thus keep all GPU assets fully utilized. This paper will utilize a simple matrix multiplication kernel(s) – GEMM and cl_intel_advanced_motion_estimation extension to illustrate how the OpenCL out of order queues can boost the performance of an application that has many independent workloads.

Execution of an OpenCL program occurs in two parts: kernels that execute on one or more OpenCL devices and a host program that executes on the host. The host program defines the context for the kernels and manages their execution. Objects such as memory, programs and kernel are created within an OpenCL context. The host creates a data structure called a command-queue to coordinate execution of the kernels on the devices. The host places commands into the command-queue which are then scheduled onto the devices within the context.

The command-queue schedules commands for execution on a device. These execute asynchronously between the host and the device. Commands execute relative to each other in one of two modes:

In-Order Execution: Commands are launched in the order they appear in the command queue and complete in order. In other words, a prior command in the queue completes before the following command begins. This serializes the execution order of commands in a queue. For example, we have kernel A and kernel B to be executed in order.

Out-of-Order Execution: Commands in an out-of-order queue do not guarantee any order of execution. Any order constraints are enforced by the programmer through explicit synchronization commands. For example, when a command waiting for a user event is placed on an OOQ it will not execute until the event is satisfied, but other commands even the ones placed after this command will start execution if their dependencies are met.

Figure 1: Out-of-order queue enables independent kernels to execute simultaneously whenever possible to keep all GPU assets busy, which does not guarantee any order of execution.

The OpenCL standard lets an application configure a command-queue to execute commands out-of-order.

In many cases multiple different kernels could potentially be ready to execute concurrently, in other words, commands placed in the work queue may begin and complete execution in any order. Therefore, it can utilize all the hardware assets to the maximum.

Applications can configure the commands enqueued to a command-queue to execute out-of-order by setting the CL_QUEUE_OUT_OF_ORDER_EXEC_MODE_ENABLE property of the command-queue. This can be specified when the command-queue is created or can be changed dynamically using clCreateCommandQueue. More details are shown in the session below.

To guarantee a specific order of execution of kernels, a wait on a particular event (in this case event “A”) can be used. The wait for event “A” can be specified in the event_wait_list argument to clEnqueueNDRangeKernel for kernel “B”.

Be aware that if we took a trivial sequence of in-order queue (IOQ) work (ABC) and migrated it to OOQ (A->B->C) with explicit dependencies yielding the same sequence, the results may be worse than an IOQ alone; a future release may similarly optimize such a sequence for OOQs.

Creating an OpenCL Out of Order Command Queue

Creating an out of order queue is a straightforward process of setting the cl_command_queue_property to CL_QUEUE_OUT_OF_ORDER_EXEC_MODE_ENABLE when creating the cl command queue. If set, the commands in the command-queue are executed out-of-order. Otherwise, commands are executed in-order.

Avoid the CL_QUEUE_PROFILING_ENABLE property in production as it may severely impact performance or even make concurrent execution impossible.

Identify independent tasks that can run in parallel and prepare them to execute through one out-of-order command-queue:

Note: For each stream of commands avoid flushing or blocking operations such as clFlush, clFinish, clWaitForEvents or blocking enqueue commands and manage dependencies with event waitlists.

This implementation optimizes trivial matrix multiplication nested loop to utilize the memory cache more efficiently by introducing a well-known practice as tiling (or blocking), where matrices are divided into blocks and the blocks are multiplied separately to maintain better data locality. Most of the GEMM code comes from General Matrix Multiply Sample from Intel® SDK for OpenCL™ applications.

To evaluate the performance of a regular GEMM kernel, by default, we calculate C’ = alpha*A*B + beta*C, and the size of A, B, C is (256 * 256) matrix. The kernel gemm_nn deals with block multiplication, and the size of the block in each work item is (1 * 128) matrix, which results in that the global size is 256 * 2. Therefore, we can get 512 work items total, and we set the local size to be (16 * 1), which means there are 32 work groups. Only a few work-items are needed to finish one kernel execution. For example, on a 6th Generation Intel® Core™ i5-6600k processor at 3.50 GHz with Intel® HD Graphics, which contains 24 execution units and 2688 SIMD16 work-items, one execution of the kernel gemm_nn cannot occupy all the computing resources. Therefore, we can get the performance benefits from submitting kernels to the out-of-order queue when the kernel’s execution cannot fill all the EUs.

To demonstrate the effectiveness of out-of-order queues versus in-order queues, we run eight GEMM kernels in one loop in order to calculate eight different matrix multiplications. In an in-order queue eight streams/kernels are executed one by one on the GPU and therefore EUs cannot be saturated. However, in an out-of-order queue multiple executions will happen at the same time to occupy all the EUs, which significantly improves the performance. We will discuss performance in next section.

In this example, we’d like to submit two GEMM kernels with serialization. For example, we calculate C_1 = alpha*A*B + beta*C in kernel_1, and then calculate C_2 = alpha*A*B + beta*C_1 in kernel_2. Since in-order execution cannot fill all the EUs, we can also get performance benefits from submitting the GEMM kernels with serialization to the out-of-order queue. Note that, in order to get the right result C_2, kernel_2 must be executed exactly after kernel_1. We can use clWaitForEvents or blocking to enqueue commands and manage dependencies with event waitlists. The experiments are tested both in out-of-order queue and in-order queue, and performance improvement will be discussed in the next section.

A real-world example of the effectiveness of out-of-order queues can be demonstrated using a common media workload. The 6th Generation Intel® Core™ i5-6600k processor at 3.50 GHz with Intel HD Graphics has dedicated hardware blocks for video motion estimation (VME) processing along with Execution Units (EUs) available for general computations. Ideally, an application’s goal should be to let applications utilize the EU’s for general purpose computations, while still using the VME engine to operate on the media content in parallel.

In our sample the VME workload and a regular OpenCL kernel will be enqueued back to back in out-of-order and in-order queues. Assuming the execution time of these two kernels is comparable, the speedup of an out-of-order queue is observed in a total execution time of these two kernels enqueued back to back and measured together.  Each of the (VME+GEMM) kernels are executed 10 times.

Most of the VME code comes from ocl_motion_estimation_advanced sample from Intel® Media Sever Studio samples (https://software.intel.com/en-us/intel-media-server-studio-support/code-samples).

Demonstrated below is the performance comparison between an in-order and an out-of-order queue on a 6th Generation Intel® Core™ i5-6600k processor at 3.50 GHz with Intel® HD Graphics, which contains 24 EUs running at 1.15Hz, on a CENTOS* 7.2.1511 platform.

First, we executed eight streams of single GEMM kernel with matrix size 256x256, back to back in in-order and out-of-order queues, and used Intel® VTune™ Amplifier 2017 to measure the GPU usages, which are shown separately in Figure 2 and Figure 3.

As Figure 2 shows, in the middle of each of the kernel’s execution cycle, VTune™ Amplifier may report the GPU EU array reaching 100 percent utilization. However due to the relatively small NDRange sizes and in-order command queues, the GPU EU array usage can only reach about 96 percent at the beginning and end of each stream/kernel. Digging deeper into the analysis of EU arrays usage, we also find the percentage of EU Active is only about 57 percent, due to a high percentage of EU stalled (about 40 percent) and also EU idled (about 3 percent) existing in the beginning and end of each kernel, which means that in-order command queue leads to underutilization of the GPU.

In Figure 3, in comparison with Figure 2, notice that the average GPU usage in the out-of-order queue is higher because most of the EU idle of GPU execution (the gray lines) are eliminated, especially those between the switch of each kernel. 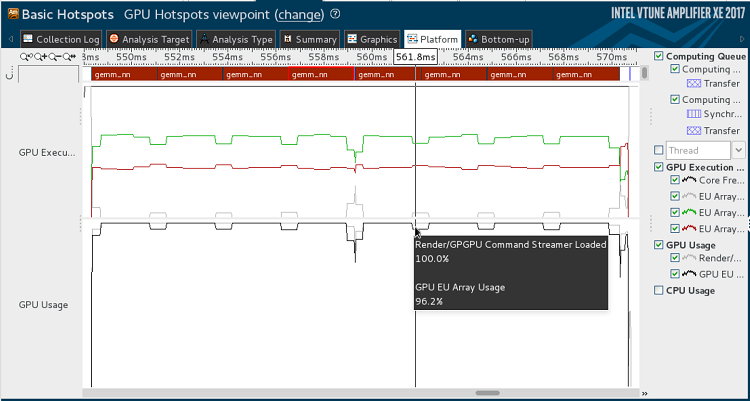 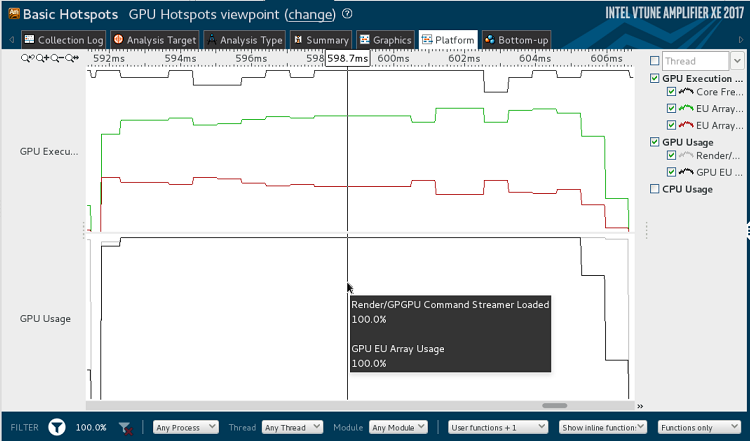 We execute GEMM kernels for different matrix sizes and performance gain of the OOQ is presented in the chart below. It shows clearly that the smaller the matrix size is, the better performance is against the IOQ, which proves that out-of-order queue can regain the lost performance in workloads that are using only a portion of the GPU assets available.

Like as before, we executed eight streams of two GEMM kernels with serialization. The experiments were tested enqueued back to back in out-of-order and in-order queues and the computing time and GFLOPS were recorded below. And as shown below, we obtained about 1.26x performance improvement.

In the application “Applying Out-of-Order Queue to VME and General GEMM Kernels”, in order to make VME and GEMM kernels comparable, the matrix size in the GEMM kernel was modified to (512 * 512). First we tested EU array and computing time of these two kernels separately, listed in the following table. Those data will be used in the analysis of out-of-order queue performance later.

In conclusion, in the (VME + GEMM) kernels application, we obtain about 1.5x performance improvement. 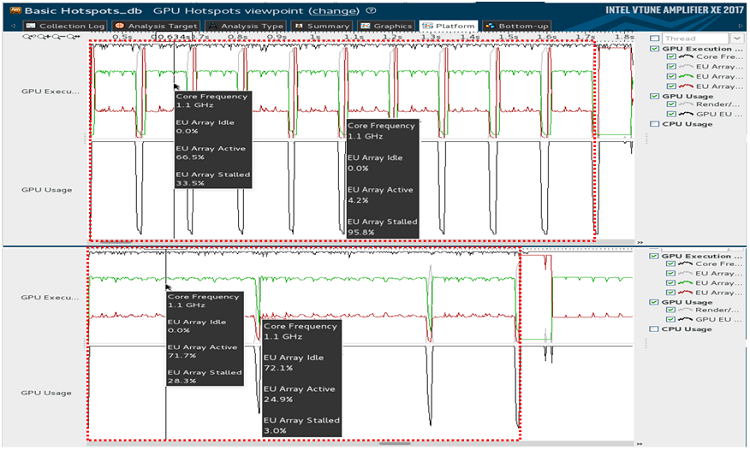