In the latest release (R3.1) of Intel® Distribution of OpenVINO™ Toolkit, DL Workbench offers Model Optimizer integration via the import Original Model feature, allowing import of popular DL models from the Internet or your own custom built models which are in the original framework format. As a result, it is no longer necessary to point DL Workbench to IR files generated by Model Optimizer offline, although this option still exists if needed. This release also includes:

This release  offers support for many more models, both FP32 and FP16 data types, across several industry-recognized frameworks, including Tensorflow*, Caffe*, Apache MxNet*, PyTorch* and Paddle Paddle* (via ONNX*), as well as optimized INT8 versions of models.. Currently, the Linux* version of the DL Workbench runs with support for CPUs, integrated GPUs and Intel® Movidius™ VPUs but only CPUs can benefit from INT8 or Winograd optimization.

The DL Workbench backend is a Docker* container, so developers can use the pre-built one on Docker* Hub or they can build their own. The easiest way to get started with the current version of DL Workbench is to run this command (Linux example):

3) Next import a compatible data set in the correct format. Currently ImageNet* (for classification) and Pascal VOC* (for Object Identification) are supported. You can also import your own data set as long as it's converted to the correct file-structure and annotation-file format (ImageNet* or VOC*).

If you don't have a dataset handy, DL Workbench will allow you to auto-generate your own dataset in ImageNet* (file-structure and annotation file) format. Keep in mind that, if this option is used, the images will consist of random noise, which is sufficient for performance measurements but inadequate for accuracy measurements.

Importing a model from the more than 40 choices available within Model Zoo is highly recommended, since these models include both models developed by Intel and models vetted, tested and, in some cases, optimized (INT8) and popularized via the Internet Note, however, that you can also use the Import Original Model button. In this case, DL Workbench now automatically runs the Model Optimizer command under the hood, prompting you to import relevant model files. Following is an example for Caffe ssd-mobilenet: 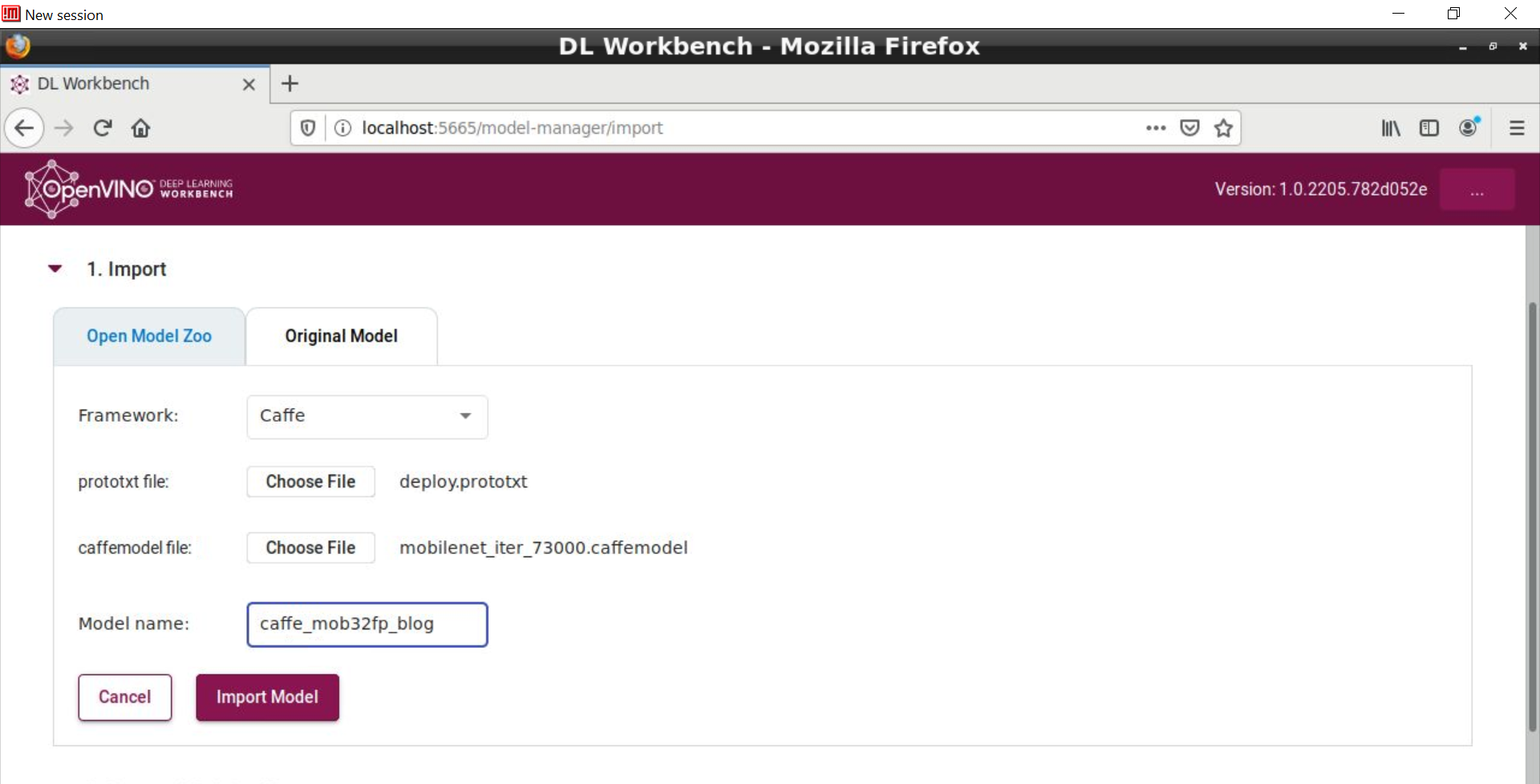 As you step through the DL Workbench screens you will also be prompted to enter image size as well as --mean_values and --scale_values and --reverse_input_channels pre-processing switches which are ordinarily passed in through the Model Optimizer command-line tool. As discussed in the previous blog post such pre-processing switches (mean values, scale values, input channels order) need to be explicitly defined and input onto Model Optimizer (and now DL Workbench) in order to generate correct IR which actually reflects how the model was trained.

This version of DL Workbench provides several helpful tips throughout, an example being the Optimize Tips shown below. 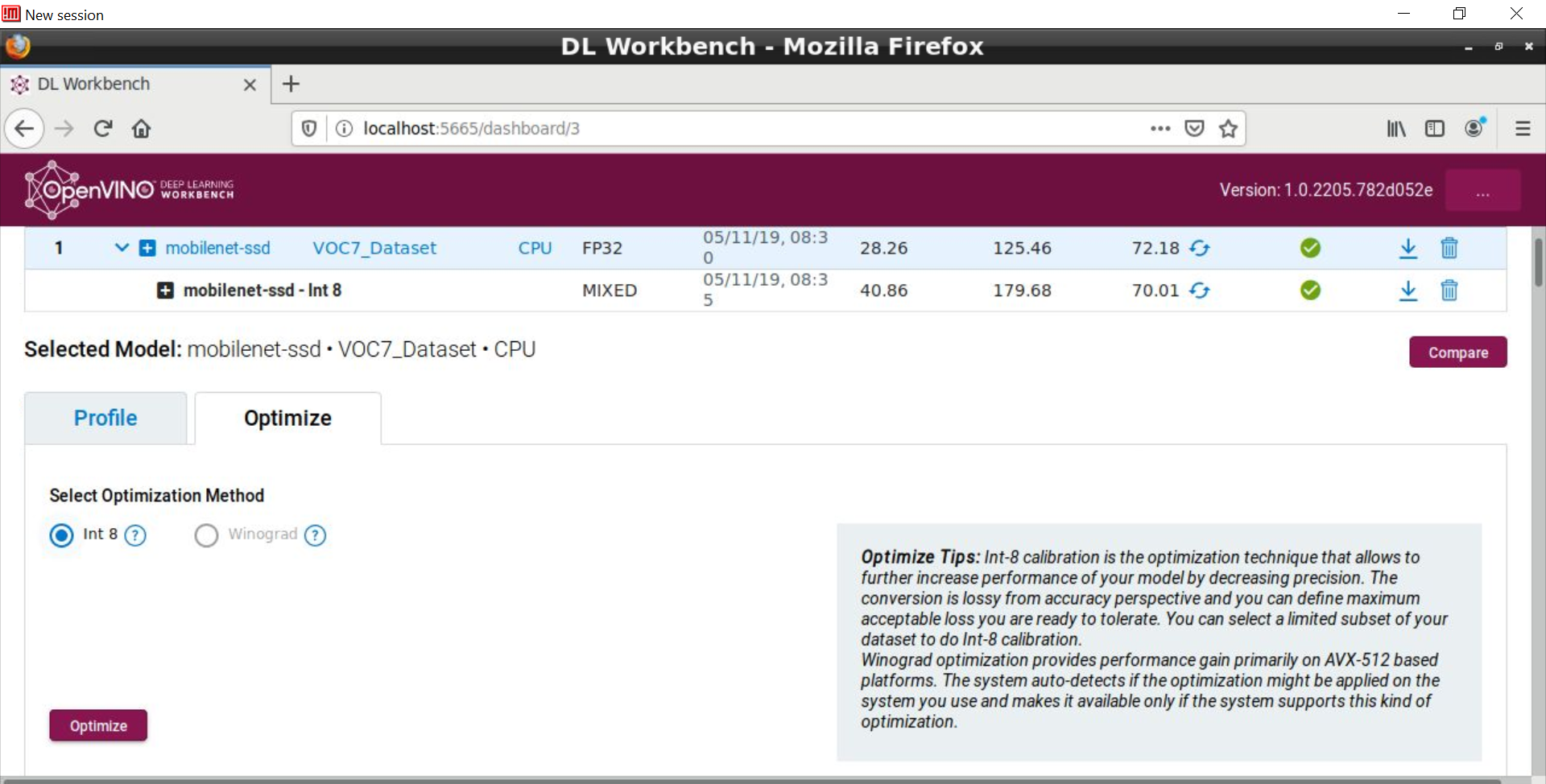 We welcome and encourage your input, comments and questions. Please engage with us through the Computer Vision Forum, or by using the tag #OpenVINO on Stack Overflow.