This is the third article in a series about how memory management works in the Data Plane Development Kit (DPDK). The first article in the series described general concepts that lie at the foundation of DPDK. The second article provided an in-depth overview of input-output virtual address (IOVA) and kernel drivers that also apply to all DPDK versions. This article outlines memory management facilities available in DPDK versions up to and including 17.11.

DPDK 17.11 is (currently) the oldest long-term support (LTS) release that is still supported. Therefore, describing memory management features available in DPDK 17.11 not only provides valuable historical perspective on the evolution of memory management features in DPDK, but also is helpful for a great many DPDK consumers who use these older, but still supported releases.

From a memory management perspective, LTS versions before 18.11 behaved exactly the same, so, unless noted otherwise, anything said about version 17.11 also applies across the board to any earlier version of DPDK as well. Some of the concepts referenced in this article have been covered in Parts 1 and 2 of this series, so be sure to read those too!

Once the system has been set up to reserve huge page memory for application use, DPDK is able to use it. By default, if no memory-related Environment Abstraction Layer (EAL) command-line arguments were specified, a DPDK application takes any huge pages it can have from the system. This is a good default, as it makes it easy to get started with DPDK.

This EAL parameter limits DPDK’s memory use to 64 megabytes (MB) (rounded up to the smallest available page size). On systems with non-uniform memory access (NUMA) support, supplying this parameter will attempt to spread the requested amount of memory on all available NUMA nodes. For example, given a two-socket system, the above command will reserve 32 MB on NUMA node 0, and 32 MB on NUMA node 1.

What if more fine-grained control is needed over per-NUMA node allocation? DPDK has another EAL command-line flag dedicated to this use-case—the --socket-mem flag:

Using this flag, it is possible to specify any per-NUMA node memory requirements. If the amount of memory for a particular NUMA node is not specified, the value is assumed to be 0; for example, on a two-socket system, supplying --socket-mem 64 will reserve 64 MB on NUMA node 0, and nothing on NUMA node 1.

How Much Memory to Reserve

Any application using DPDK library version 17.11 or earlier must know its memory requirements in advance. This is because, for these versions of DPDK, there is no possibility to either reserve additional huge page memory after initialization, or to release it back to the system. Therefore, any memory a DPDK application might use must be reserved at application initialization and is held onto by DPDK for the entirety of the application’s lifetime.

It is generally a good idea to leave some headroom when deciding on the amount of memory to reserve. Certain amounts of DPDK memory will be “wasted” on various internal allocations, and these amounts vary depending on your configuration (number of devices DPDK will use, enabled functionality, and so on). 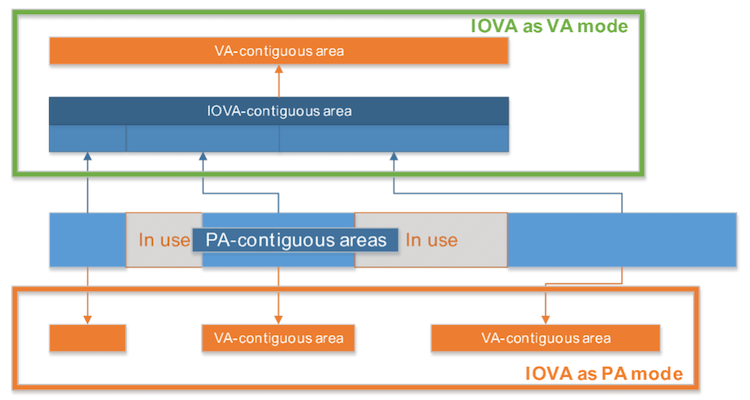 In IOVA as VA mode this is not an issue, because in that case, the IOVA space layout will match that of the VA space (rather than the other way around), and all of the physical memory is remapped to appear IOVA-contiguous to the hardware.

Once DPDK has started up, there are numerous ways to use the memory provided by DPDK in the user applications. In DPDK, most of the time, available memory will be pinned to a NUMA node. The user then has a choice to either allocate memory on a specific NUMA node (by specifying the NUMA node ID at allocation time as an API parameter), or letting DPDK itself decide where to allocate the memory by using a special value as a NUMA node ID.

For general purpose allocations, DPDK provides its own set of APIs that are mirroring glibc malloc() functions. There are also NUMA-aware versions of these APIs. These APIs should feel very familiar to a C programmer, and all of the benefits of using DPDK’s memory management—explicit NUMA node locality, fewer translation lookaside buffer (TLB) misses, alignment, and so on—will apply to any memory allocated using these APIs.

In addition to that, DPDK also provides the rte_memzone family of APIs, which allow allocating raw memory zones that satisfy requirements of size, alignment, and boundaries, as well as NUMA node and page size. Memory zones must also have unique names, as they can be looked up by their name. These APIs are mainly used internally by data structures, drivers, and such, and are not typically used in application code.

In DPDK 17.11 and earlier, all DPDK memory allocations, regardless of how they are performed, are both VA- and IOVA-contiguous. All memory allocation APIs are also thread-safe, and since the memory is also shared between all primary and secondary processes, passing pointers between processes, as well as allocating or freeing memory in different processes, is perfectly safe.

In addition to the above, EAL also provides some specialized functionality that is not useful in a general case, but can come in handy in certain scenarios.

One of the features EAL provides is a no-huge mode, available by specifying the --no-huge EAL command-line flag. This makes it so that DPDK does not require (or use) huge page memory to initialize, and instead uses regular memory. This is usually useful for debugging purposes only (such as running some unit tests), as packet IO will not work unless IOVA as VA mode is used. The --socket-mem switch is invalid in this mode, but the -m switch still specifies how much memory DPDK should reserve at startup.

Another feature available in EAL is setting a custom hugetlbfs mountpoint with the --huge-dir command-line parameter. If the user has multiple mountpoints for hugetlbfs of the same page size, the results can be unpredictable, as this is not an expected environment for DPDK to operate in. Specifying a particular mountpoint for DPDK to use resolves that issue, although only one such mountpoint can be used at a time.

Removing Huge Pages from the Filesystem

Finally, the most useful option is --huge-unlink. By default, whenever DPDK initializes, it creates and stores all huge page files in hugetlbfs mountpoints and will not remove them at exit. Thus, when a DPDK application exits, those huge pages are still used as far as the kernel is concerned (even though the DPDK has already shut down), and in order to free them back to the system, these files need to be removed from the filesystem. This behavior is intentional, as it allows secondary DPDK processes to initialize and attach to the memory (and continue working normally), even if the primary process has exited.

The --huge-unlink option makes it so that, at initialization time, the huge page files in hugetlbfs mountpoints are created, mapped, and then immediately removed. DPDK will keep holding on to the allocated huge pages, but there will be no more files left behind in the hugetlbfs filesystem, so there is nothing to clean up after DPDK application exit. It goes without saying that this option sacrifices secondary process support (because there is no shared memory that can be discovered at initialization), but for many DPDK use cases, this tradeoff is acceptable.

This article provides an overview of memory management features available in DPDK version 17.11 and earlier, as well as outlining the various options available to make the most out of DPDK for a particular use case.

EAL section of the Programmer’s Guide for DPDK release 17.11

Other Articles in this Series