What Is Graph Analytics? Why Does It Matter?

A graph is a good way to represent a set of objects and the relations between them (Figure 1). Graph analytics is the set of techniques to extract information from connections between entities.

For example, graph analytics can be used to:

Graph analytics has been getting a lot of attention lately, possibly because Gartner* listed it among the top 10 data and analytics technology trends for 2019:

Intel has a long history of leadership in graph analysis. For example, Intel coauthored the GraphBLAS specification to formulate graph problems such as sparse linear algebra. Though the GraphBLAS API was published in 2017, the initial proposal and manifesto were published over 10 years ago. Today, the same industry and academic partnership is coauthoring the forthcoming LAGraph specification for a library of graph algorithms. The Defense Advanced Research Projects Agency (DARPA) also selected Intel to develop a new processor to handle large graph datasets (see DARPA Taps Intel for Graph Analytics Chip Project). We continue to innovate and push the graph analytics envelope.

Graph analytics is a large and varied landscape. Even the simple examples in Figure 1 show differing characteristics. For example, some networks are highly connected while others are sparser. A network of webpages exhibits different connectivity than a network of Twitter* users, where some have millions of followers while most have only a few. Consequently, no single combination of graph algorithm, graph topology, or graph size can adequately represent the entire landscape.

Therefore, we use the Graph Algorithm Platform (GAP) Benchmark Suite from the University of California, Berkeley, to measure graph analytics performance. GAP specifies six widely used algorithms (Table 1) and five small- to medium-sized graphs (Table 2). Each graph has different characteristics: Optimizations that work well for one graph topology may not work well for others. For example, the Road* graph is relatively small, but its high diameter can cause problems for some algorithms. Consequently, the 30 GAP data points provide good coverage of the graph analytics landscape.

Table 2. GAP uses five graphs of varying size and topology to give a more complete picture of graph analytics performance.

GAP also has the advantages of being a clearly defined, objective, off-the-shelf benchmark. It doesn’t require special hardware or software configurations, so it’s easy to run.

To run the benchmark:

Consequently, it’s only possible to run nine of the 30 GAP tests (Table 4). As you can see, where GAP can run on both architectures, the Intel Xeon processors outperformed the NVIDIA V100 on most tests, even when:

Note The multiple NVIDIA V100 PRs in cuGraph does not provide a convergence tolerance parameter so the default parameters were used for these tests. Kron and Urand tests failed with a thrust::system::system_error. The following is also in the graph:
DNR: Does not run because of insufficient memory.
NA: Not available in cuGraph v0.9.0.

Note The Amazon Web Services (AWS)* price comparison is only an approximation because no Amazon EC2 instances exactly match the benchmarking system that's based on the Intel Xeon processor, but the m4.16xlarge instance is similar. 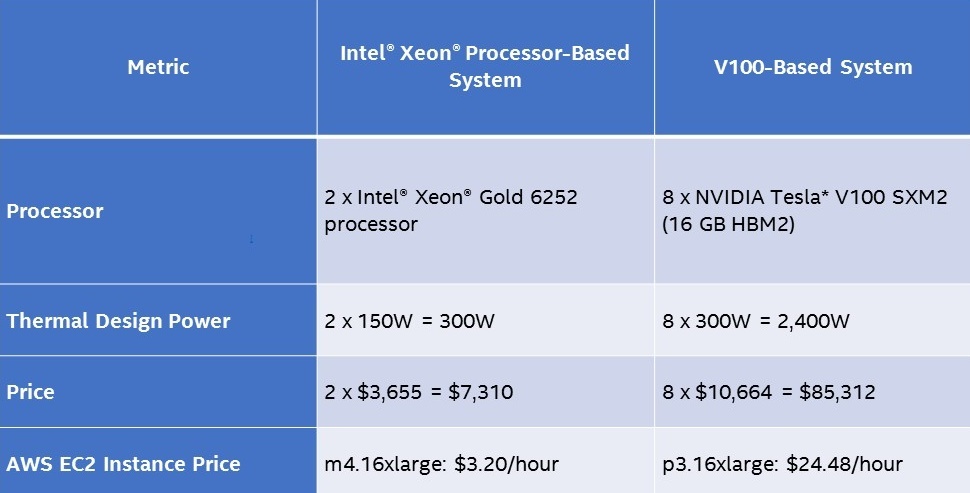 The GAP results on the platform for the Intel Xeon processor (Table 3) could be improved with a few simple changes, like:

But, that's not the purpose of this article. The goal is to show how to get comprehensive, objective, and reproducible graph analytics performance data without confusion or resorting to benchmarking tricks.