Future 5G networks must support a very diverse range of services and applications, some of which will have extremely stringent targets of end-to-end latency, heading toward sub-millisecond, to ensure that key performance indicators (KPIs) for quality metrics are satisfied.1 In addition to applications already well known to be sensitive to latency (such as voice), examples of low-latency business applications on 5G include those in the healthcare sector (for example, remote surgery), the automotive sector (such as intelligent transport systems) and manufacturing (for example, industrial process automation).2

As set out in the ITU-T Technology Watch white paper detailing characteristics and requirements of The Tactile Internet, the main driver for sub-millisecond latency targets relates to human reaction and response times, and how the combination of auditory and visual components contribute to the overall user experience.3

As highlighted in Figure 1, which shows an example of a sensor/actuator interaction via radio access infrastructure and edge compute infrastructure, the actual aggregated end-to-end latency will be dictated by the system components that make up the architecture. A key challenge is to understand how individual elements contribute to this latency budget. 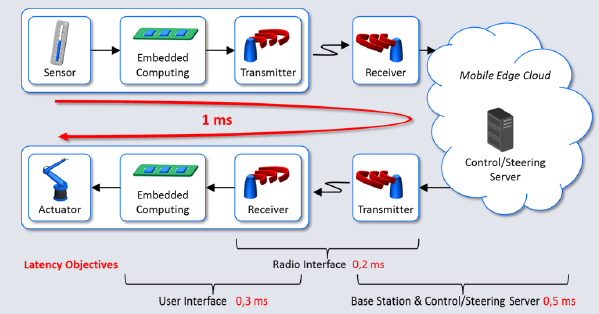 One of the key pillars of 5G architecture and design involves leveraging network functions virtualization (NFV) and software defined networks (SDN) to maximize flexibility and reduce overall capital and operating costs.4 NFV infrastructure (NFVI) can potentially be deployed in a number of locations to satisfy specific functional requirements, ranging from the edge of the network, including certain edge components of the radio access network (RAN), through to the core network (CN), comprising various gateway functions in both control plane and data plane domains.5

The focus of this paper is how to characterize the NFVI contribution to latency within the end-to-end architecture, and how specific optimization toolsets and fine tuning can be applied to NFVI to help achieve deterministic performance. Moreover, the testbed used to conduct experiments comprises solely open source components (hardware, hypervisor, virtual infrastructure manager, and so on), and aligns with the OPNFV (Open Platform for NFV) best practice for tuning Linux*-based KVM hypervisors.6

As well as being built purely from open source hardware and software system components, thus maximizing flexibility and reducing cost, a novel testing framework was designed for the experiments which enabled a unique blend of performance characterization to be performed, as follows:

Section 2 explains in detail the testing environment and the objectives of the experiments carried out. Section 3 presents the key test results, while Section 4 draws conclusions and suggests areas for further research and development.

The testbed comprises a number of distinct elements, with the NFV-specific components based predominantly on open-source ingredients. A high-level overview of the generic setup is shown in Figure 2. 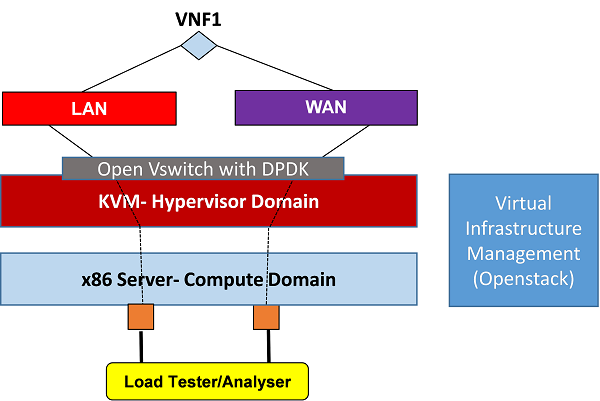 Three specific configurations were assessed, with one of these being a simple vanilla un-optimized configuration (to provide a comparative reference), while the other two configurations are variations of high-performance platforms, specifically tuned and set up with the intent of minimizing latency. As shown in Table 1, the high-performance (optimized) platforms use the same hardware, but with different system components and versions in the hypervisor and VIM domains.

As well as the fact that different hardware is used, the main differences between the optimized setups and the vanilla, un-optimized setup is the use of a Real-Time* kernel within the base OS, and the use of Open Vswitch* (OVS) with Data Plane Development Kit (DPDK). The use of a real-time kernel promotes reduced latency due to prioritization and pre-emption, whereby there is more predictability of the time taken between a request for a task to be performed and the actual task being executed by the CPU.7 The use of DPDK, meanwhile, accelerates packet processing (thereby minimizing latency) through the OVS. In the standard OVS, packets that are forwarded between network interface controllers (NICs) do so in the kernel space data path of the virtual switch that consists of a simple flow table indicating what to do with packets that are received. In the OVS with DPDK model, the main forwarding plane (sometimes called the fast path) is in the user space of the OVS and uses DPDK. One of the key differences with this architecture (Figure 3) is the fact that the NICs are now poll mode drivers (PMDs), meaning incoming packets are continuously polled, rather than being interrupt-driven in an asynchronous fashion. 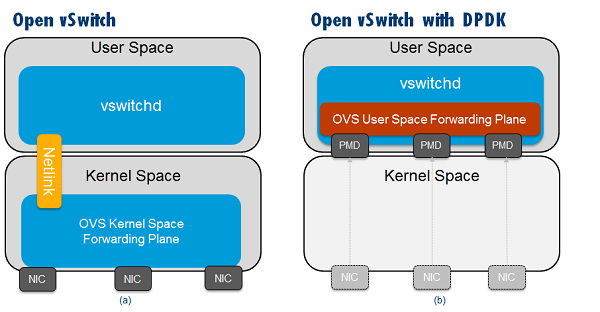 The second distinction between the optimized-I and optimized-II setups is that the optimized-II setup uses later variants of some of the key components within the hypervisor and VIM domains, as described in Table 1. Indeed, the ingredients of the optimized-II configuration are part of the Intel® Open Network Platform (Intel® ONP) 2.0 framework, which also aligns closely with the OPNFV Brahmaputra* architectural release.8

The two types of VNF used in the testing were a Brocade* 5600 virtual router, and a specially designed DPDK-based skeleton application VM set up to forward packets in a bridged (or pass-through) fashion between two virtual interfaces, connected to distinct virtual networks (depicted in Figure 2 as LAN and WAN). The purpose of the skeleton application VM was to introduce minimal VNF-specific latency and therefore provide a close representation of the infrastructure baseline contribution (in other words, compute + hypervisor domains) to the end-to-end latency.

A Spirent Test Center* C1 load testing appliance was used for running test traffic. The test equipment uses a signature with a timestamp to determine the latency between frames—this signature is at the end of the payload next to the frame check sequence (FCS), and has a timestamp, sequence numbers and stream ID. The same traffic load comprising a single traffic flow was generated to the system under test in each direction, and the results described in the following section capture the worst-case metrics observed for a particular direction (that is, the cited values of latency are for a single direction only and not round-trip values).

The principal objectives of the testing were as follows: 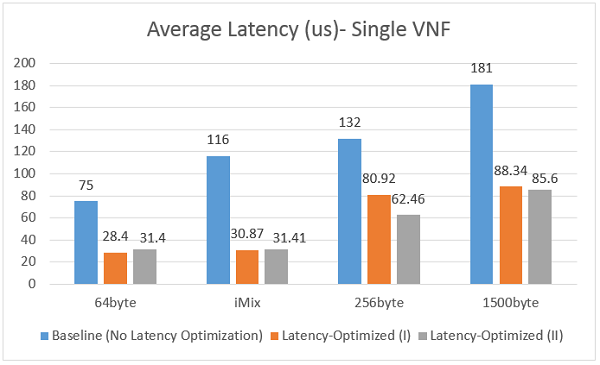 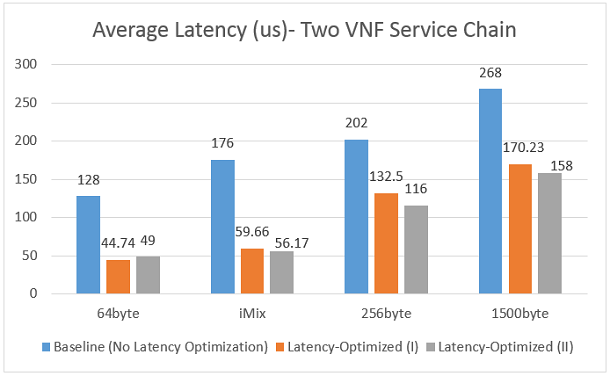 The results for average latency across the range of packet profiles clearly show significantly improved performance (lower average latency) in the optimized cases. As would be expected, the dual VNF case involves higher overall latency results for both testbeds due to more packet switches between the VNF instances, and through the virtual switches within the hypervisor. It is instructive to explore in more detail the results for a specific packet profile scenario; for example, the 256-byte packet tests are closely representative of voice-over-IP frames generated using the Real-time Transport Protocol (RTP) with G.711 encoding.9 Figure 6 shows the minimum, average, and maximum one-way latency values for each testbed setup, using the single VNF scenario with 256-byte packets. 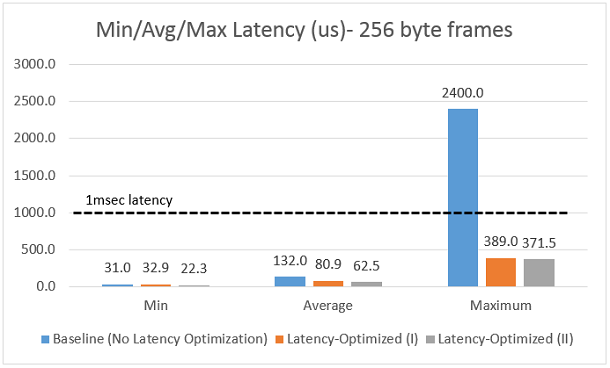 The primary focus of subsequent testing was the optimized-II setup, as it uses later versions of system components and achieves the lowest values of latency.

Although the results for the latency-optimized setups (Figure 6) suggest sub-millisecond values for both average and maximum latency metrics, it must be noted that five-minute duration tests will be inadequate for detecting drift effects in maximum latency. Longer duration soak tests were carried out on the optimized-II set up to assess the maximum latency measured at discrete time intervals, the plots for which are shown in Figure 7. 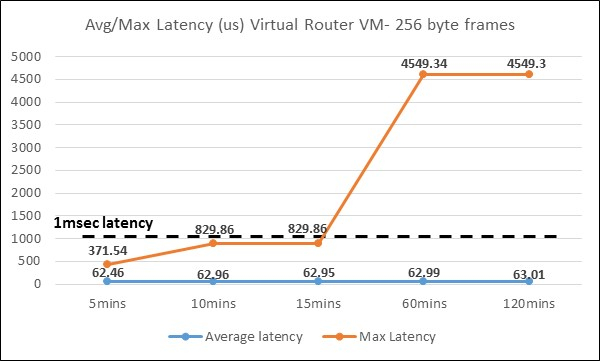 The maximum latency profile of Figure 7 clearly shows a tendency toward ~milliseconds values, although the fact that the average latency is very negligibly increased over the same time period confirms that only very isolated packets manifest the high latency. The potential root causes for these latency spikes can be attributed to individual behaviors of the VNFs, and/or housekeeping characteristics of the Linux operating system, causing somewhat hard to predict interrupt scenarios.

In order to baseline the infrastructure contribution to overall latency—infrastructure in this context being the physical compute plus the hypervisor domain—a simple, minimal function skeleton application was produced based on a Fedora virtual machine (VM). This VM was configured to forward packets in a bridged (or pass-through) fashion between two virtual interfaces connected using virtual networks/bridges as part of the OVS with DPDK instance in the optimized-II setup.

Initially, five-minute tests were carried out using the range of packet profiles, and compared with the virtual router testing as shown in Figure 8. As can be seen, the skeleton application—providing an indicative representation of baseline infrastructure latency—has notably lower values than the virtual router VNF. It can be deduced that for the optimized-II setup using OVS 2.4.9 in conjunction with DPDK 2.1.0, a baseline value of average latency for the NFVI of between 9.5 and 13us is achievable (packet profile dependent), with the additional VNF contribution being between three and six times those figures. Specifically, for the average latency measurements, the virtual router VNF has an additional average latency contribution of ~21us (for 64-byte and iMix tests), ~53us (for 256-byte tests) and ~72us (for 1500-byte tests). 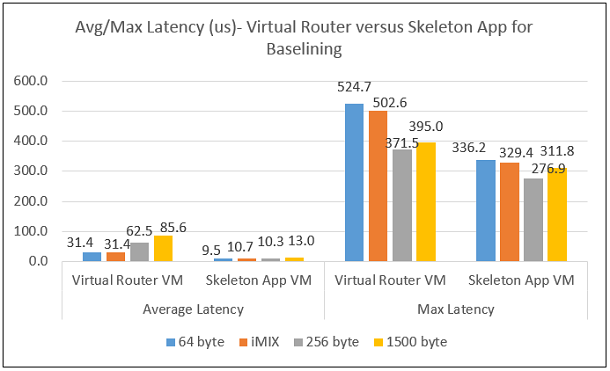 As discussed earlier in the paper, maximum latency requires a longer duration analysis (for example, extending from five minutes to two hours) to ensure that the effects of latency spikes are taken into account. Figure 9 shows the average and maximum latency for the skeleton application, plotted for the same two-hour period as used in the virtual router test plotted in Figure 7. 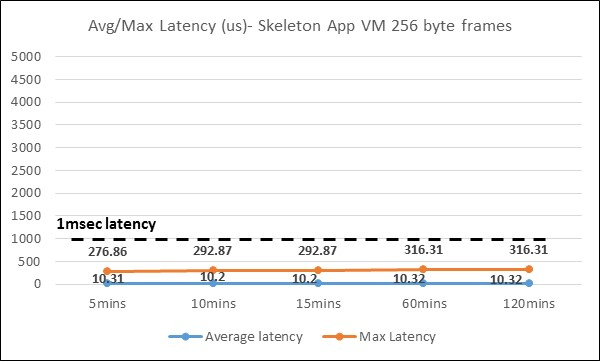 Testing of the skeleton application was extended to a 12-hour period (thus providing a view of baseline NFVI latency contribution over a longer period of time), for both 256-byte and iMix packet profiles. As shown in Figure 10, in both cases an average latency of around 10us is observed with the maximum value of 0.38msec for iMix and 0.72msec for 256-byte packet profiles; both well within the 1-msec boundary. 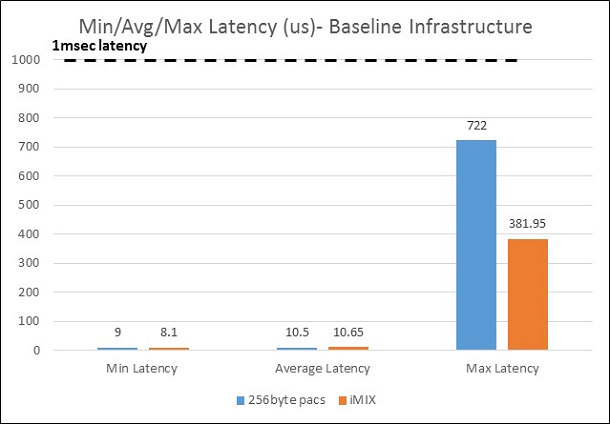 The results in this section highlight the efficacy of using a simple skeleton application to provide insights into both the baseline values of average and maximum latency contributed by the NFV infrastructure, as well as typical VNF contributions.

One of the unexpected consequences of the testing was observed occurrences of OOS frames. This occurred on the optimized-I setup with its particular mix of system components, but was subsequently eliminated on the optimized-II setup, which involved later variants of OVS and DPDK, and had further tuning of the real-time kernel. Percentage values of OOS for optimized-I and optimized-II setups are provided in Table 2 across the range of packet profiles tested, and plotted for five-minute tests.

To ensure OOS was not introduced at a later point, much longer duration tests were carried out and they all confirmed that for the optimized-II setup, zero OOS was observed. Figure 11 shows the test results for the skeleton application using 256-byte packets, measured over 40 hours. They confirm both the fact that the maximum latency has not drifted beyond its 12-hour value of 0.72ms, and also that zero OOS frames occur; this is for a total frame count of 1.6 billion.

These results have two important consequences:

Since 5G will have a number of latency-critical applications, and implementation of certain 5G components will be underpinned by NFVI, it is vital to be able to accurately characterize and fine-tune the NFVI to understand its contribution to latency. This paper has outlined a novel open source testing framework to enable a unique blend of performance characterizations. This included the use of a skeleton application packet forwarding instance to enable visibility of the baseline contribution made by the NFVI (physical compute + hypervisor), as well as indicative VNF contributions. Furthermore, the difference between average and maximum latency values was explored by conducting longer duration soak tests, as well as the potential occurrence of OOS frames.

The key findings can be summarized as follows:

Further areas for research include: