In this article, we first review the performance challenges encountered in Ceph* 4K I/O workloads and give a brief analysis of the CPU distribution for a single Ceph OSD object storage daemon (OSD) process.  We then discuss inefficiencies in the existing TCP/IP stack and introduce the iWARP RDMA protocol supported by Intel® Ethernet Connection X722, followed by a description of the design and implementation for  iWARP RDMA integration into Ceph. Finally, we provide a performance evaluation of Ceph with iWARP RDMA, which demonstrates up to 17 percent performance improvement compared with the TCP/IP stack6.

Ceph has made steady progress on improving networking messenger since the Ceph Jewel* release. The default simple messenger has been changed to async messenger to be more CPU efficient and compatible with different network protocols, such as TCP/IP  and RDMA. The Ceph community designed and implemented a new solid-state drive (SSD)-friendly object storage backend called BlueStore*, and leveraged additional state-of-the-art software technology such as Data Plane Development Kit (DPDK) and Storage Performance Development Kit (SPDK). These software stack changes made it possible to further improve the Ceph-based storage solution performance.

At the 2017 Boston OpenStack Summit3, Intel presented an Intel Optane SSD and Intel® SSD Data Center P4500 Series based Ceph all-flash array cluster that delivered multimillion input/output operations per second (IOPS) with extremely low latency and competitive dollar per gigabyte costs. We also showed the significant networking overhead imposed by network messenger. As shown in Figure 2, the CPU tended to be the bottleneck in a 4K random read workload. Analysis showed that 22–24 percent of the CPU was used to handle network traffic, highlighting the need to optimize the Ceph networking component for ultra-low latency and low CPU overhead. Traditional TCP/IP cannot satisfy this requirement, but RDMA can 4. 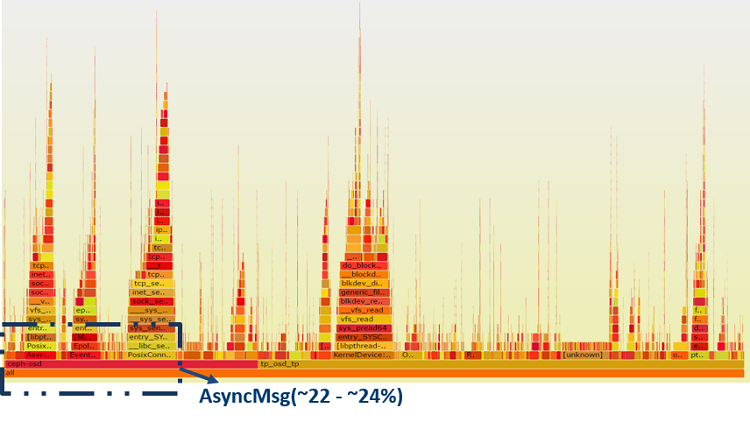 Previous studies have shown that traditional TCP/IP has two outstanding issues: high CPU overhead for handling packets in the operating system kernel and high message transfer round-trip latency, even when the average traffic load is moderate. RDMA performs direct memory access from one computer to another without involving the destination computer’s operating system, and has the following advantages over TCP/IP:

Integrating iWARP into the Ceph* System

This section describes the evolution of RDMA design and implementation in Ceph. We will discuss the general architecture of Ceph RDMA messenger, and then share how we enabled iWARP in the current Ceph async messenger.

The Ceph system relies on messenger for communications. Currently, the Ceph system supports simple, async, and XIO messengers. From the view of the messenger, all of the Ceph services such as OSD, monitor, and metadata server (MDS), can be treated as a message dispatcher or consumer. Messenger layers play the role of bridge between Ceph services and bottom-layer network hardware.

There are several other projects that focus on integrating RDMA into the Ceph system—XIO* messenger is one of them. XIO messenger is built on top of an Accelio* project that is a high-performance asynchronous reliable messaging and remote procedure call (RPC) library optimized for hardware acceleration. It was merged into the Ceph master in 2015, and supports different network protocols, such as RDMA and TCP/IP. XIO messenger seamlessly supports RDMA*, including InfiniBand*, RoCE* and iWARP*. In this implementation, RDMA is treated as a network component, like simple messenger or async messenger in the Ceph system. According to feedback from the Ceph community 7, there are some scalability issues and stability issues; currently this project is not actively maintained. 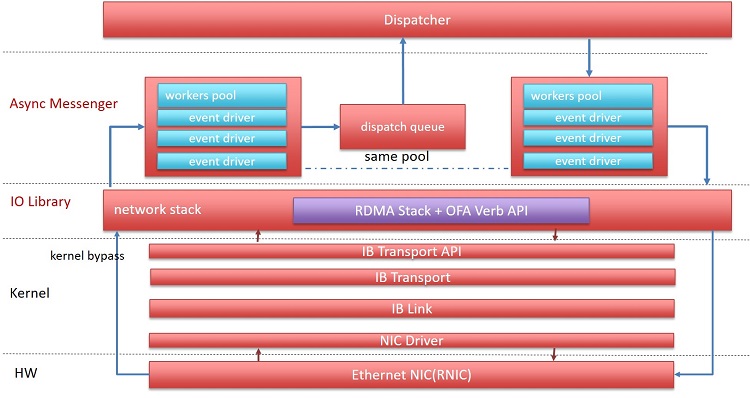 With the rapid growth of message transfer between Internet applications, high-performance (high-speed, high-throughput, and low-latency) networking is needed to connect servers in data centers, where Intel Ethernet is still the dominant network physical layer, and the TCP/IP stack is widely used for network services. Previously, we came to the conclusion that the TCP/IP stack cannot meet the demands of the new generation of data center workloads. Ceph with iWARP RDMA is a practical way for data centers running Ceph over TCP/IP to move to RDMA, leveraging Intel® Ethernet with iWARP RDMA to accelerate the Ceph system. 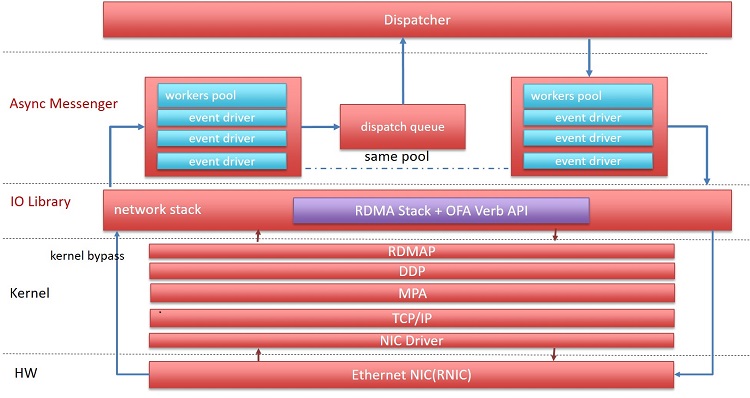 In this section, we present the performance evaluation of Ceph with iWARP RDMA.

The performance evaluation was conducted on a cluster with two OSD nodes and two client nodes. The detailed configurations were as follows: 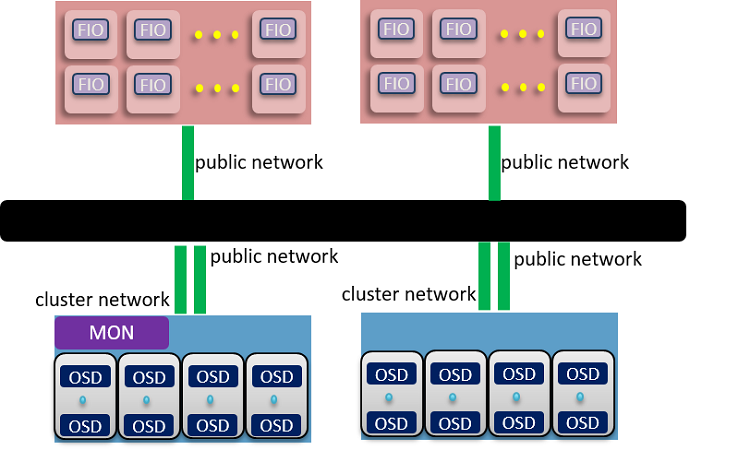 We simulated typical workloads on an all-flash Ceph cluster in the cloud with FIO 4K random write running on Ceph RBD volumes. For each test case, IOPS was measured at different levels of queue depth scaling (1 to 32). Each volume was configured to be 30 GB. The volumes were pre-allocated to eliminate the Ceph thin-provision mechanism’s impact on stable and reproducible results. The OSD page cache was dropped before each run to eliminate page cache impact. For each test case, FIO was configured with a 300-second warm up and 300-second data collection.

Ceph system performance comparison with TCP and with iWARP RDMA 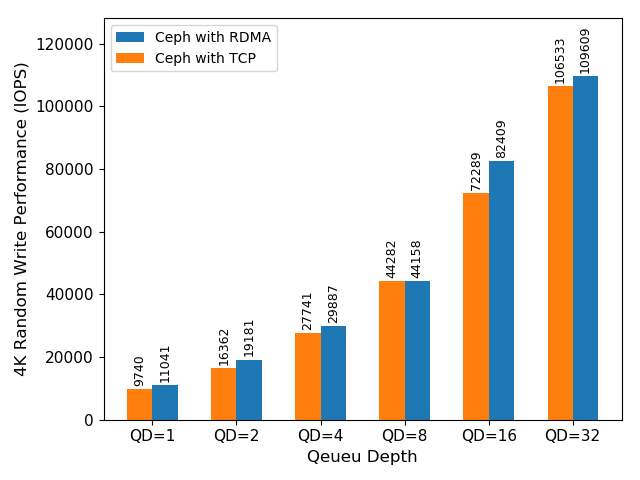 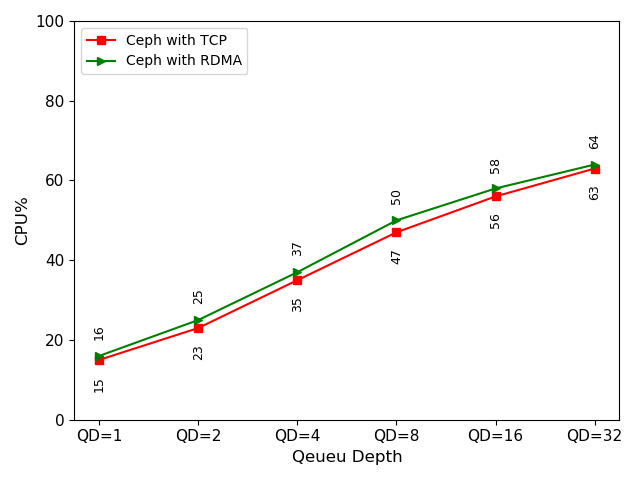 (b) CPU comparison on OSD node

Figure 6 (b) shows CPU utilization on an OSD node when running an FIO process on an RBD volume. The CPU utilization of Ceph with RDMA was higher than with TCP/IP, which was not our expectation (detailed root cause will be illustrated later). Theoretically, RDMA should reduce CPU utilization since RDMA bypasses the kernel and limits context switching. 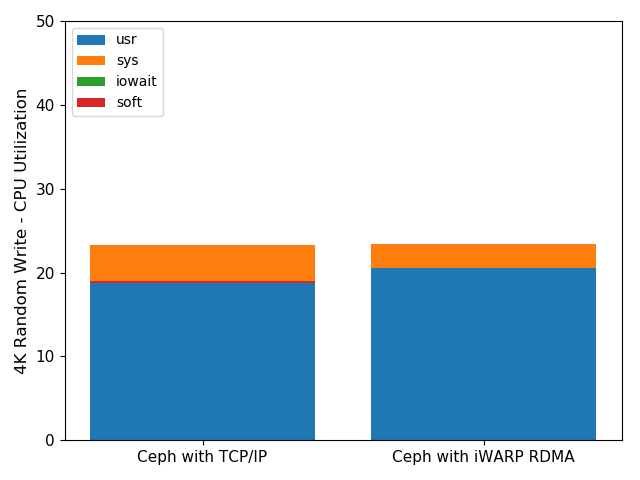 To verify the scalability of Ceph with iWARP RDMA, we scaled up the number of OSD nodes and client nodes to three, keeping the other Ceph configuration and benchmarking methodologies the same as previous tests. 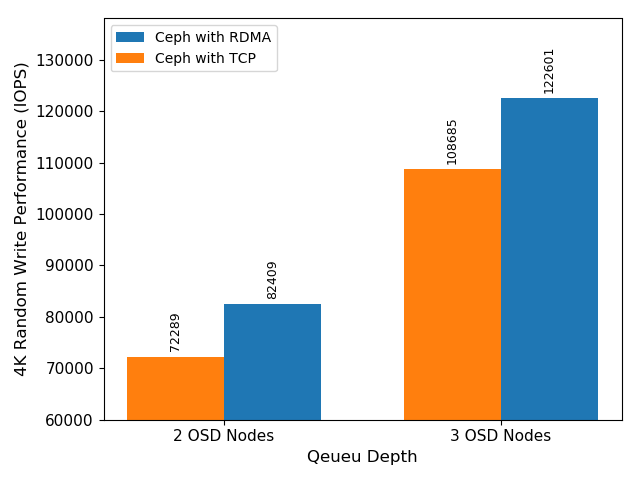 To better understand the overhead inside Ceph async messenger with iWARP RDMA, we looked at the message receiving flow. 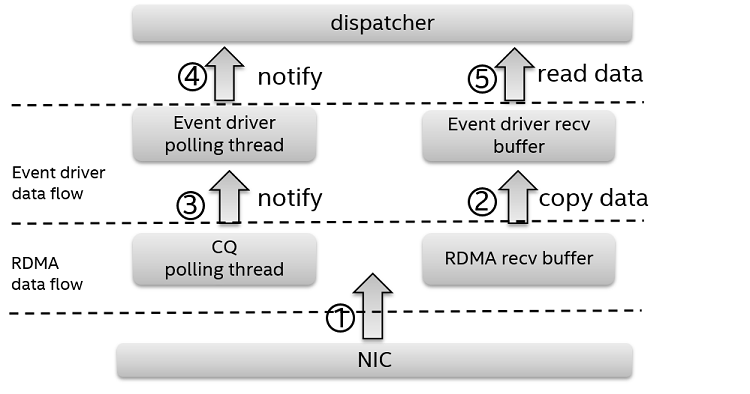 To give a clearer description of the flow, we simplify the message transfer process, which follows this precondition: It is a single server and client architecture; the client has already established an RDMA connection with the server, and the server sends a 4K message to the client.

The RDMA message transfer process is based on Ceph async messenger. For one message receiving flow, two events are triggered and one message copied. We go deeper and use a perf flame graph to get the details of CPU usage for one async messenger worker.

Adapting RDMA polling to an I/O multiplexing framework such as async messenger is not an optimal solution. RDMA concentrates on avoiding CPU overhead in the kernel level. Signaling a descriptor in async messenger introduces an extra context switch, which increases CPU overhead. Meanwhile, we have proposed an RDMA messenger library, and integrated it with a distributed cache storage project, Hyper-converged Distributed Cache Storage (HDCS) 8. The initial benchmark shows great performance benefit (I/O and CPU consumption) with RDMA networking, compared to TCP/IP.

Based on past experience, we will continue to make performance optimizations to the Ceph RDMA code, including separating RDMA polling from the async messenger event driver, and avoiding memory copy to the async messenger recv buffer. Because RDMA protocol provides message-based rather than stream-based transactions, we do not need to separate the stream into different message/transactions on the message sender side and piece them together on the receiver side. Messenger-based transactions make it possible to avoid extra memory copy operations for buffering the data.

For two issues, we consider leveraging non-volatile memory express over Fabrics (NVMe-oF) to disaggregate the Ceph storage node and the OSD node. First, current Ceph system configuration cannot fully benefit from NVMe drive performance; the journal drive tends to be the bottleneck. Second, for the one OSD process per one NVMe drive configuration, 40 percent of the Intel Xeon processor is not utilized on the OSD node. By disaggregating the Ceph storage and OSD nodes, we can use all NVMe devices on the target node as an NVMe pool and dynamically allocate an appropriate NVMe drive for the specified OSD node.

We have initial performance data6 to show that NVMe-oF does not degrade Ceph 4K random-write performance. With NVMe-oF CPU offload on the target node, the CPU overhead on the target node is less than 1 percent. We did not find evidence of CPU overhead on the OSD node. However, we found that with NVMe-oF, the FIO tail latency is much higher than with the local NVMe drive in a high FIO queue depth workload. We still need to identify the root cause and leverage the high-density storage node as a pool for lower TCO.

We find that the CPU still tends to be the bottleneck in 4K random read/write workloads, which severely limits the peak performance and OSD scale-up ability, even with the latest network layer and object storage backend optimization in the Ceph community. RDMA provides remote memory access, bypassing the kernel to unleash CPU overhead there, and reducing round-trip message transfer time.

According to system metrics on the OSD node, Ceph with iWARP RDMA consumes more CPU. But, through deeper analysis, we see the CPU cycle distribution and find the two polling threads issue in the current RDMA implementation.

Next steps: we will focus on async messenger RDMA performance optimization, including the two polling threads issue. Furthermore, we will explore the opportunity to leverage an NVMe-oF and use the high-density storage node as a storage pool to reduce the TCO of Ceph all-flash array cluster.

6. Accelerating Ceph with RDMA and NVMe-oF

§ Configurations: [describe config + what test used + who did testing].

§ For more information go to http://www.intel.com/performance.