In this article, we describe the various mechanisms through which you can use Intel® Optane™ DC persistent memory as volatile memory in addition to dynamic random-access memory (DRAM) for your Java* applications. We start with a brief introduction to Java memory management and Intel® Optane™ DC persistent memory module OS support, then dive into the Java usage mechanism.

The Java Virtual Machine (JVM) provides a managed runtime environment for executing Java programs on target platforms. The Java programs are compiled into platform-independent bytecodes and collated into jar files or modules and executed on the target platform using JVM.

Memory management is a key feature provided by the JVM. The JVM manages a chunk of memory, called the Java heap, on behalf of the application. All the Java objects created by the application, using new keywords, are allocated by the JVM on the Java heap. Java applications also do not need to free the memory allocated. The JVM automatically determines which objects are not being used and reclaims memory from such objects, using a process called garbage collection.

The default size of the Java heap varies in different JVM implementations and is usually determined based on the available memory in the system. You can also configure the Java heap on the JVM command line.

OpenJDK* is the leading free and open source implementation of the Java Platform, Standard Edition (SE) runtime and is widely adopted by the industry. The reference implementation for Java SE is also based on OpenJDK.

Intel Optane DC persistent memory represents a new class of memory and storage technology architected specifically for data center usage. It offers an unprecedented combination of high-capacity, affordability, and persistence. By expanding affordable system memory capacity, customers can use systems enabled with this new class of memory to better optimize their workloads by moving and maintaining larger amounts of data closer to the processor and minimizing the higher latency of fetching data from system storage.

All use cases and examples shown in this document use Intel Optane DC persistent memory modules in App Direct mode to provide high capacity and low-cost volatile memory.

The process of mounting persistent memory modules for use as a DAX filesystem is described in more detail in the NDCTL Getting Started guide for Linux and Creating a Windows Development Environment at pmem.io.

App Direct mode, where both DRAM and the Intel Optane DC persistent memory modules are exposed to the application as addressable memory, gives you more control. In this mode, you can continue to have the JVM, JIT-compiled Java application code, stack, and metadata in DRAM and host the entire Java heap, part of the Java heap, or Java objects at a finer granularity in persistent memory. 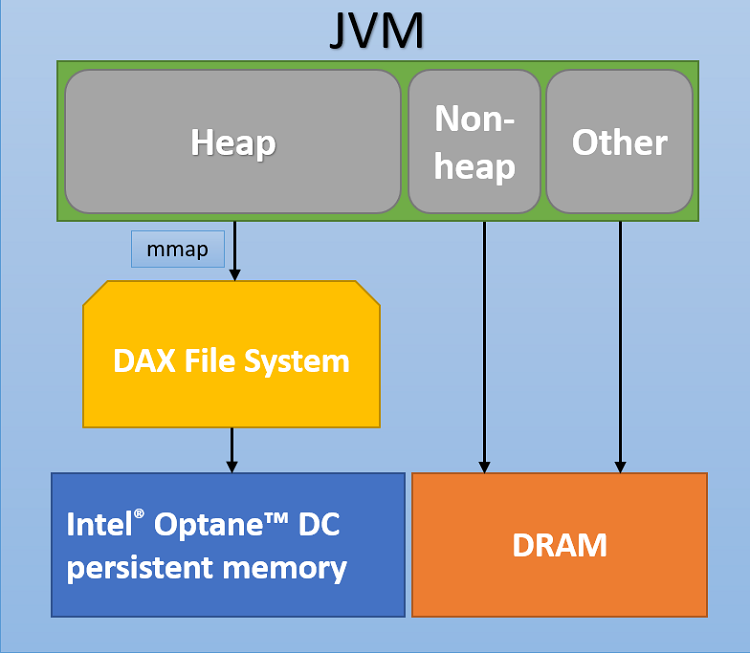 Let’s look at an example in more detail on Linux.

Note that other blocks of memory managed by the JVM, such as JIT-compiled Java application code, stack, and metadata continue to be allocated in DRAM. This flag does not change the behavior of the rest of the JVM. The existing heap and garbage collection-related flags such as -Xmx, -Xms, etc. have the same semantics as before. 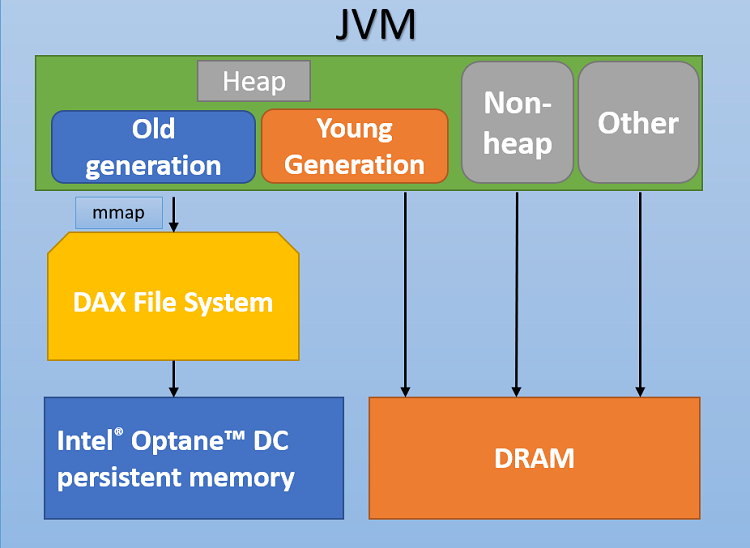 Let’s look at an example on Linux:

This option is supported for G1 and ParallelOld garbage collection algorithms. This feature maintains the GC ergonomics and works with dynamic sizing of heap generations. More details on this feature can be found in the Release Notes.

If you want to use persistent memory at a finer granularity than whole heap or partial heap for your Java application, you can use DirectByteBuffer objects and allocate them on Intel Optane DC persistent memory. ByteBuffers are available starting in JDK 1.4. This can be achieved via two mechanisms which are described below.

A DirectByteBuffer can be created by mapping a region of a file directly into memory. You can use the functionality provided by the FileChannel class to map a DirectByteBuffer to Intel Optane DC persistent memory.

The following code demonstrates this approach:

In this article, we looked at various ways available today to use Intel Optane DC Persistent Memory in App Direct mode for Java applications. The different mechanisms provide powerful tools for users to control the placement of data on persistent memory at different levels of granularity. The best configuration to use depends on the application characteristics and needs.

Kishor Kharbas is a software engineer at Intel. He joined Intel in 2011 and has been working on Java virtual machine optimizations for Intel server platforms.

Sandhya Viswanathan is a software engineer at Intel with 25 plus years of industry experience in compilers and software development tools. She joined Intel in 2008 and has been working on Java virtual machine optimizations for Intel server platforms. She is a technical lead in the Java engineering team focusing on Java JIT compiler, runtime, and GC optimizations.