To efficiently utilize all available resources for the task concurrency application on heterogeneous platforms, designers need to understand the memory architecture, the thread utilization on each platform, the pipeline to offload the workload to different platforms, and to coordinate all these activities.

To relieve designers of the burden of implementing the necessary infrastructures, the Heterogeneous Streaming (hStreams) library provides a set of well-defined APIs to support a task-based parallelism model on heterogeneous platforms. hStreams explores the use of the Intel® Coprocessor Offload Infrastructure (Intel® COI) to implement these infrastructures. That is, the host decomposes the workload into tasks, one or more tasks are executed in separate targets, and finally the host gathers the results from all of the targets. Note that the host can also be a target too.

Users can contribute to hStreams development at https://github.com/01org/hetero-streams. The following tables summarize the tools that support hStreams in Linux and Windows:

This whitepaper briefly introduces hStreams and highlights its concepts. For a full description, readers are encouraged to read the tutorial included in the hStreams package mentioned above.

This section highlights some basic concepts of hStreams: source and sink, domains, streams, buffers, and actions:

In a typical scenario, the source-side code allocates stream resources, allocates memory, transfers data to the sink, invokes the sink to execute a predefined function, handles synchronization, and eventually terminates streams. Note that actions such as data transferring, remote invocation, and synchronization are handled in FIFO streams. The sink-side code simply executes the function that the source requested.

For example, consider the pseudo-code of a simple hStreams application that creates two streams, the source transfers data to the sinks, performs remote invocation at the sinks, and then transfers results back to the source host:

The following figure illustrates the actions generated at the host:

Actions are placed in the corresponding streams and removed at the sinks: 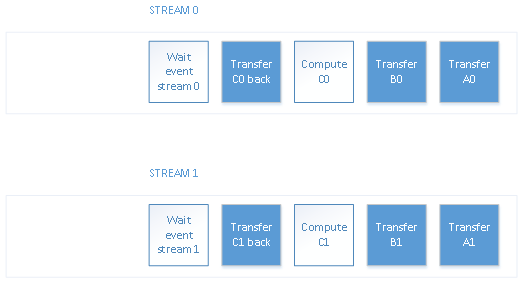 hStreams provides two levels of APIs: the app API and the core API. The app API offers simple interfaces; it is targeted to novice users to quickly ramp on hStreams library. The core API gives advanced users the full functionality of the library. The app APIs in fact call the core layer APIs, which in turn use Intel COI and the Symmetric Communication Interface (SCIF). Note that users can mix these two levels of API when writing their applications. For more details on the hStreams API, refer to the document Programing Guide and API Reference. The following figure illustrates the relation between the hStreams app API and the core API.

Refer to the document “Hetero Streams Library 1.0 Programing Guide and API” and the tutorial included in the hStreams download package for more information.

This section illustrates a sample code that makes use of the hStreams app API. It also demonstrates how to build and run the application. The sample code is an MPI program running on an Intel Xeon processor host with two Intel Xeon Phi coprocessors connected.

This sample MPI program is designed to run with two MPI ranks. Each MPI rank runs on a different domain (Intel Xeon processor host) and initializes two streams; each stream is responsible for communicating with a coprocessor. The MPI ranks enqueues the required actions into the streams in the following order: Memory transfer action from source to sink action, remote invocation action, and memory transfer action from sink to source. The following app APIs are called in the source-side code:

The above command generates the executable hstream_sample. To generate the user kernel library for the coprocessor (as sink), compile with the flag –mmic:

To follow the convention, the target library takes the form <exec_name>_mic.so for the Intel Xeon Phi coprocessor and <exec_name>_host.so for the host. This generates the library named hstream_sample_mic.so under the folder /mic.

To run this application, set the environment variable SINK_LD_LIBRARY_PATH so that hStreams runtime can find the user kernel library hstream_sample_mic.so

hStreams provides a well-defined set of APIs allowing users to design a task-based application on heterogeneous platforms quickly. Two levels of hStreams API co-exist: The app API offers simple interfaces for novice users to quickly ramp on the hStreams library, and the core API gives advanced users the full functionality of the rich library. This paper presents some basic hStreams concepts and illustrates how to build and run an MPI program that takes advantages of the hStreams interface.

Loc Q Nguyen received an MBA from University of Dallas, a master’s degree in Electrical Engineering from McGill University, and a bachelor's degree in Electrical Engineering from École Polytechnique de Montréal. He is currently a software engineer with Intel Corporation's Software and Services Group. His areas of interest include computer networking, parallel computing, and computer graphics.