XSplit VCam was developed by the research and development division of SplitmediaLabs to bring advanced-quality video background removal solution to the game streaming market. The technology uses a deep learning AI framework coupled with a custom-built, high-performance inference engine.

The unique inferencing engine in XSplit VCam is based on OpenCL™, a standard framework for execution on heterogeneous platforms. It provides the flexibility to execute on the CPU, discrete and integrated Graphics Processing Units (GPUs), digital signal processors (DSPs), and field programmable gate arrays (FPGAs), as well as custom silicon designed for machine learning, such as the Intel® Movidius™ Neural Compute Stick (NCS).

Performance remains a key issue for gamers, and the challenge is to ensure that video background removal does not impact their gaming experience. With AI, video encoding, and in-game physics – such as dynamic explosions, crumbling buildings, and so on – competing for resources, the discrete GPU on gaming computers is coming under increasing pressure for streamers. Assigning XSplit VCam processing to execute on Intel® Graphics Technology (integrated GPUs) or multicore CPUs, helps to ensure that a game running on a platform with a discrete GPU is not impacted.

One of the most important aspects of game streaming is the interaction between the streamer and the audience. Showing the streamer’s reactions through the use of a webcam is a common way to achieve interaction. XSplit estimates that up to 50 percent of game streams utilize a webcam as part of their broadcast presentation1 . XSplit VCam can further enhance this experience by adding a range of customization options to the streamer’s toolkit, allowing them to achieve a perceived high production value.

The following use cases demonstrate how the features in XSplit VCam handle common broadcast presentation problems that occur when streaming games, such as background removal, background replacement, and background blurring.

The majority of gaming broadcasters that feature a webcam in their presentation tend to prefer complete background removal, immersing themselves fully in the game. Previously, achieving these results would require a full green screen setup in the background in combination with studio lighting. However, XSplit VCam allows users to achieve this effect using only a standard webcam without a green screen. When used in conjunction with XSplit Broadcaster or other popular streaming software, the user is only limited by their creativity to use this feature in a variety of ways – see figure 1. Often when streaming games, a user mayopttoreplace the background oftheir webcam feed. XSplitVCam allows forthis by letting users insert any image or website as their background. This option lets users place themselves into unique environments or take advantage of the ability to load a website toinsert motionbackgrounds. For example, if they’re playing the latest Legend of Zelda* game, users can set the kingdom of Hyrule as their background – see figure 2. 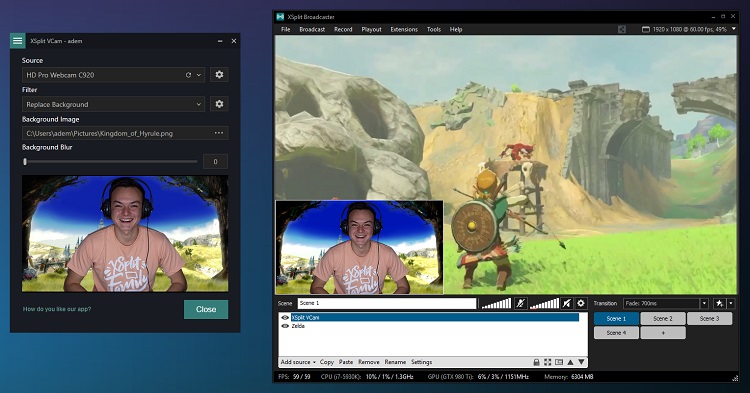 A newer trend among streamers is to display their original background, which is usually composed and designed to show on camera. Frequently users will ensure that their background is made up of branding, memorabilia, and an array of colored lighting to achieve a visually-pleasing presentation. Background blur can be useful in these cases by allowing a user to incrementally soften the background simulating the depth of field effect produced by high-end cameras.

This effect allows for a user to, again, increase the perceived production value of their broadcast with just a simple desktop webcam, as opposed to a full tripod mounted camera. Additionally, blur can be increased more dramatically to completely obfuscate the background which can be useful when wanting to provide privacy, hide unsightly details (e.g. a messy room) or reduce distractions that come with being in crowded or public areas.

Background blur can be used in conjunction with the aforementioned background replacement feature to add a soft or dramatic blur to whatever backdrop a user may choose to load, achieving an effect similar to those used in news broadcasts – see figure 3. 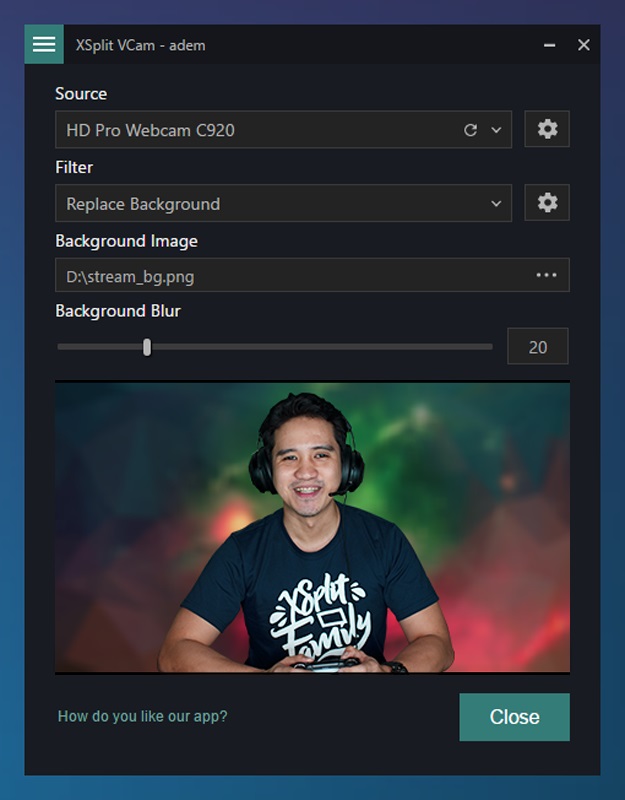 Most laptop and desktop computers powered by an Intel CPU have an integrated Intel GPU embedded on the same die as the processor. The primary benefit of Intel integrated GPUs (iGPUs) have traditionally been their affordability as a single CPU and GPU system, combined with prolonged battery life in gaming laptops with both an iGPU and a discrete GPU (dGPU).

With 8th generation Intel® Core™ processors this no longer remains the main argument. The Intel iGPU now packs extra power, allowing applications to run alongside games, or the game itself, to use the iGPU to offload process-intensive tasks which can lead to an improvement in overall user experience.

Note: On some desktop gaming motherboards or prebuilt desktop PC systems with a discrete GPU, the iGPU is disabled in the BIOS by some manufacturers, but users generally can enable the iGPU themselves.

This resulting performance assessment is based on SplitMediaLabs simulations to gauge the impact on a game’s frames per second (FPS) rate when using the background removal function in XSplit VCam. The setup involves both a desktop and a laptop device considered mid-range by SplitmediaLabs at the time of publication.

Next, Open Broadcaster Software (OBS) Studio, a widely used broadcasting solution, was added to the workflow with both a game capture and a standard webcam in the default scene. Representing the most common use case for live streaming, and the impact on the average FPS in this scenario is what is considered normal. Using a camera output of 360p at 30 FPS. It was being recorded with NVENC H.264, CQP 23 - a form of quality-based encoding where the bitrate adjusts dynamically to produce a consistent quality determined by the Constant Quantization Parameter (CQP). To illustrate how much XSplit VCam would affect the game applications the SplitMediaLabs tests were conducted on either the iGPU or the dGPU of the host machine.

In the interest of introducing less bias, OBS is used as the streaming/recording tool instead of XSplit Broadcaster or XSplit Gamecaster, the sister products of XSplit VCam.

With the desktop setup, XSplit VCam running on the iGPU nets a 0.5 percent hit to the overall average FPS of UNIGINE VALLEY while in contrast, running on the dGPU causes over a 7.7 percent dip – see figure 4. The ‘performance %’ in This graph, and each of the subsequent graphs compare the FPS of the particular test with the baseline FPS of the control. The control is the instance where only the benchmark was running which is why it appears as 100 percent. 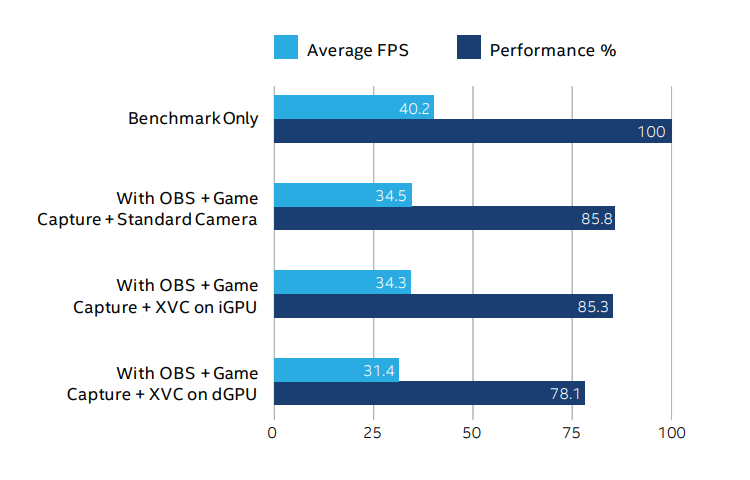 Similarly, Fortnite with XSplit VCam on the iGPU only affects the game’s FPS by 1.2 percent while on the dGPU, the performance drop is 8.8 percent – see figure 5. 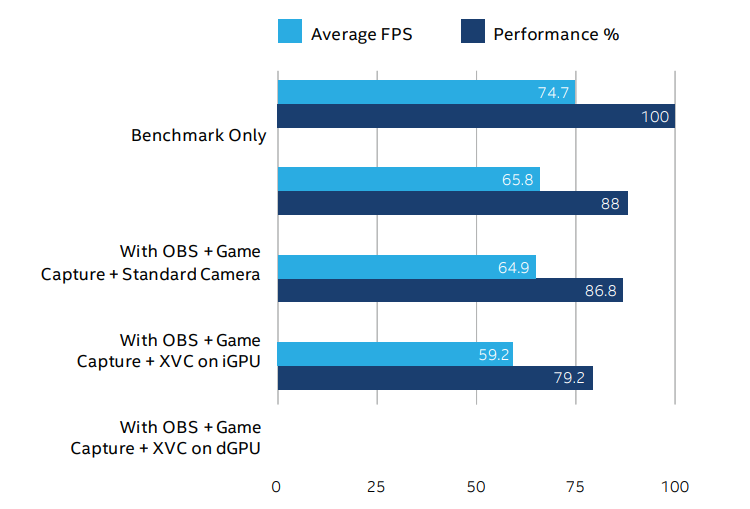 The laptop results show a similar pattern in performance with XSplit VCam on the iGPU only affecting UNIGINE Valley’s FPS by one percent, whereas running on the dGPU causes over an 8.5 percent drop – see figure 6. The trend continues in Fortnite, with XSplit VCam on the iGPU impacting the game’s FPS by 1.1 percent versus having it on the dGPU, where the performance hit is 8.4 percent – see figure 7. 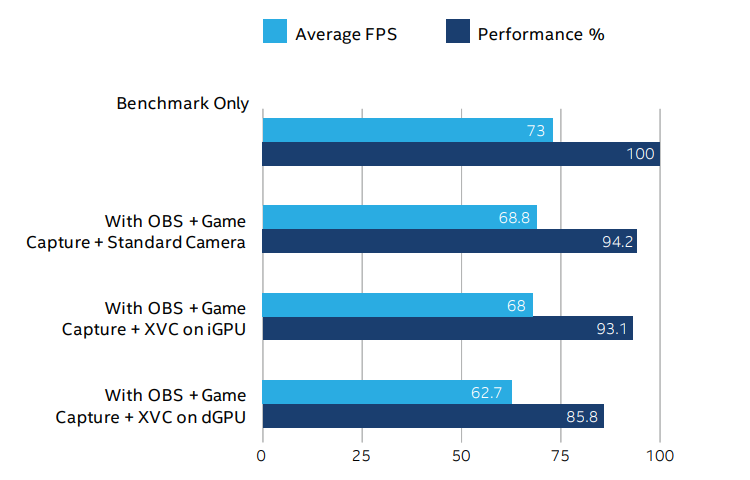 XSplit VCam uses a convolutional neural network model to perform background removal processing in real time. The neural network processing (inferencing) is a significant workload which requires millions of calculations for each processed frame. However, results show that by performing this workload entirely on an Intel iGPU, users looking to stream or record their gameplay can use XSplit VCam to improve production quality of their stream with minimized FPS performance impact.

Ultimately, this means that XSplit VCam, when combined with an Intel iGPU, can provide gamers the benefit of high-quality simulated background removal with minimal performance loss while gaming.

To give XSplit VCam a try, download it for free.

1. Based on XSplit usage statistics.

2. Software and workloads used in performance tests may have been optimized for performance only on Intel microprocessors. Performance tests, such as SYSmark and MobileMark, are measured using specific computer systems, components, software, operations and functions. Any change to any of those factors may cause the results to vary. You should consult other information and performance tests to assist you in fully evaluating your contemplated purchases, including the performance of that product when combined with other products. For more complete information visit www.intel.com/benchmarks.

Performance results are based on testing as of December 18th, 2018 and may not reflect all publicly available security updates. See configuration disclosure for details. No product can be absolutely secure.