In this article, I will share a few studies that are conducted using the hooking technique to provide a simple and effective protection solution against certain offline attacks in Android applications.

Android applications are commonly written in the Java* programming language. When developers need to request performance or low-level API access, they can code in C/C++ and compile into a native library, and then call it through the Java Native Interface (JNI). After that, the Android SDK tools pack all compiled code, data, and resource files into an Android Package (APK).

Android apps are packaged and distributed in APK format, which is a standard ZIP file format. It can be extracted using any ZIP tools. Once extracted, an APK file may contain the following folders and files (see Figure 1): 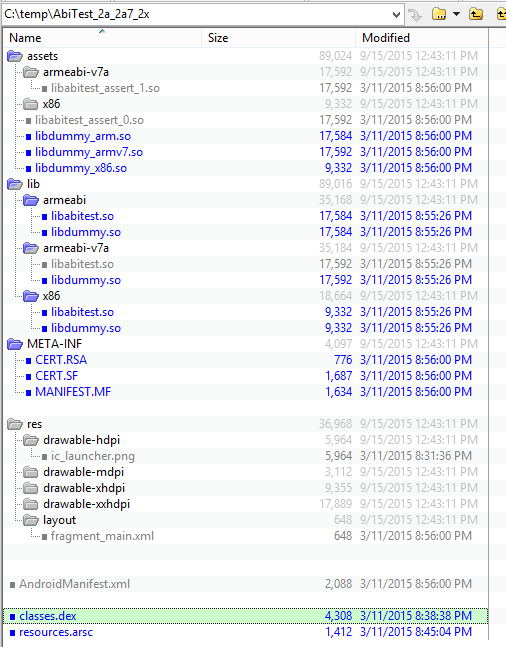 Once the package is installed on the user’s device, its files are extracted and placed in the following directories:

By analyzing the folder and file structure given in the previous section, applications have several vulnerable points that developers should be aware of. An attacker can get a lot of valuable information by exploiting these weaknesses.

One vulnerable point is that the application stores raw data in the ‘asset’ folder, for example, the resources used by a game engine. This includes the audio and video materials, the game logic script files, and the texture resource for the spirits and scenes. Because the Android app package is not encrypted, an attacker can get these resources easily by getting the package from the app store or from another Android device.

Another vulnerable point is weak file access controls for the rooted device and external storage. An attacker can get the application’s private data file via root privilege of the victim’s device, or the application data is written to the external storage such as an SD card. If the private data was not well protected, attackers can get some information such as user account information and passwords from the file.

Finally, the debug information might be visible. If developers forget to comment the relevant debugging code before publishing applications, attackers can retrieve debug output by using Logcat.

Hooking is a term for a range of code modification techniques that are used to change the behavior of the original code running sequence by inserting instructions into the code segment at runtime (Figure 2 sketches the basic flow of hooking).

Figure 2: Hook can change the running sequence of the program

In this article, two type of hooking techniques are investigated: 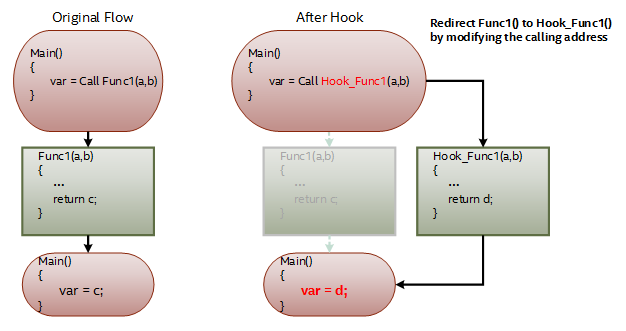 Unlike the symbol table redirection that must modify every relocation address, the inline hooking only overwrites the start bytes of the target function we want to hook (see Figure 4). The inline redirection is more robust than the symbol table hooking because it does one change working at any time. The downside is that if the original function is called at any place in the application, it will then also execute the code in the hooked function. So we must identify the caller carefully in the redirected function. 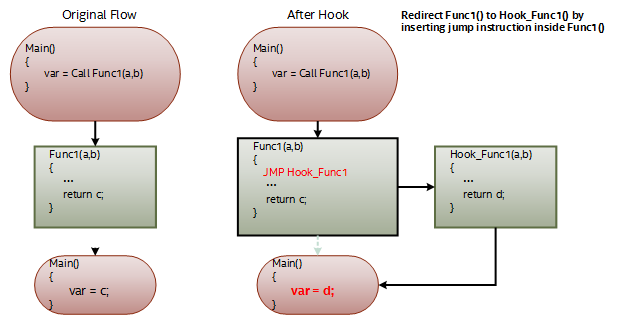 Figure 4: The flow of inline redirection

Since the Android OS is based on the Linux* kernel, many of the studies of Linux apply to Android as well. The examples detailed here are based on Ubuntu* 12.04.5 LTS.

The simplest way to create an inline redirection is to insert a JMP instruction at the start address of the function. When the code calls the target function, it will jump to the redirect function immediately. See the example shown in Figure 5. 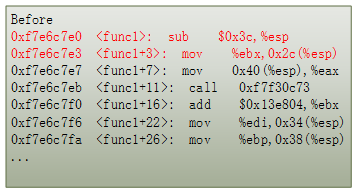 Figure 5: Inline hooking with use the first five bytes of the function to insert JMP instruction

The inline hooking injection process replaces the first five bytes of data in the address with 0xE9 E0 D7 E6 F7. The process creates a jump instruction that executes a jump to the address 0xF7E6D7E0, the entrance of the function called my_func1(). All code calls to func1() will be redirected to my_func1(). The data input to my_func(1) goes through a pre-processing stage then passes the processed data to the func1() to complete the original process. Figure 6 shows the code running sequence after hooking func1(). Figure 7 gives the pseudo C code of func1() after hooking. 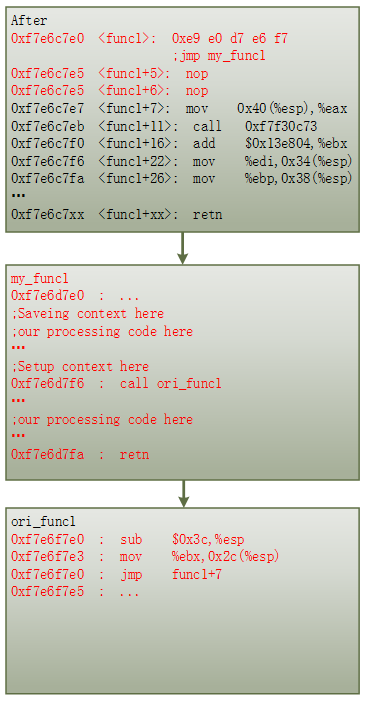 Using this method, the original code will not be aware of the change of the data processing flow. But more processing code has been appended to the original function func1(). Developers can use this technique to add patches to the function at runtime. 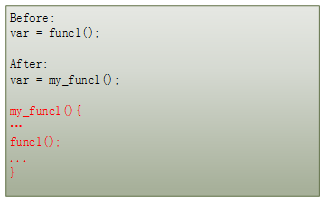 Figure 7: Usage of hooking: the pseudo C code of Figure 6

Compared to inline redirection, symbol table redirection is more complicated. The relevant hooking code has to parse the entire symbol table, handle all possible cases, search and replace the relocation function addresses one by one. The symbol table in the DLL (Dynamic Link Library) will be very different, depending on what compiler parameters are used as well as how developers call the external function.

To study all the cases regarding the symbol table, a test project was created that includes two dynamic libraries compiled with different compiler parameters:

Figures 8-11 show code execution flow of the test program, the source code of libtest1()/libtest2() which are exactly the same function except compiled with different compiler parameters, and output of the program. 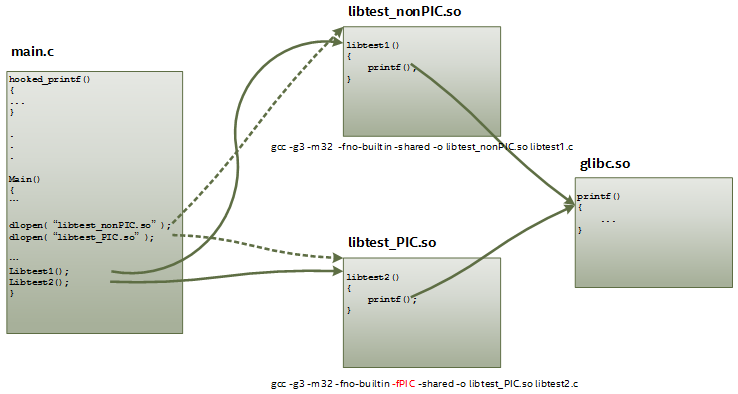 The function printf() is used for hooking. It is the most used function for printing information to the console. It is defined in stdio.h, and the function code is located in glibc.so. 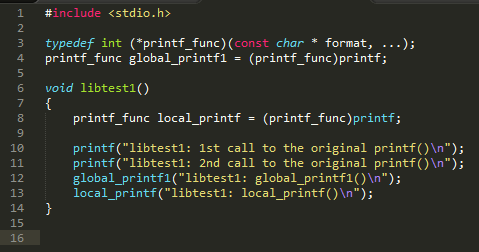 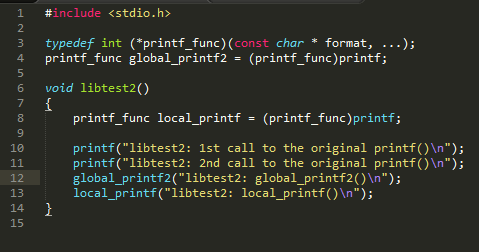 Figure 11: The output of the test program

A standard DLL object file is composed of multiple sections. Each section has its own role and definition. The .rel.dyn section contains the dynamic relocation table. And the section information of the file can be disassembled by the command objdump –D libtest_nonPIC.so.

The Figure 13 shows the generated assembly code of function libtest1(). The entry addresses of printf() marked with red color are specified in the relocation section .rel.dyn in Figure 12. 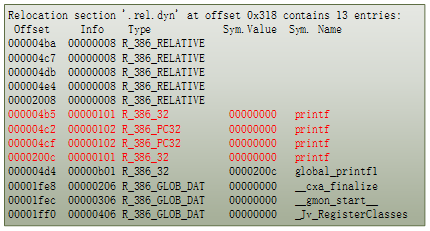 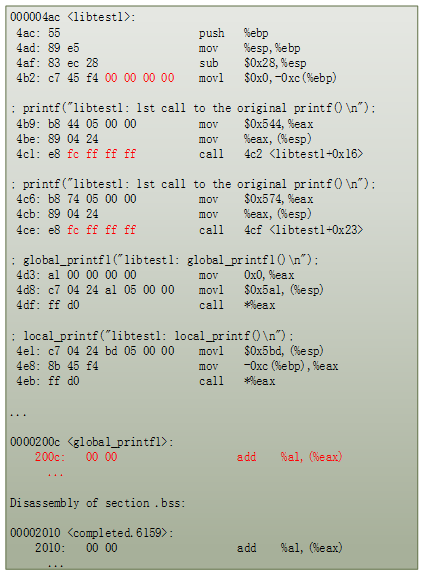 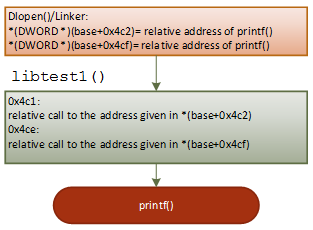 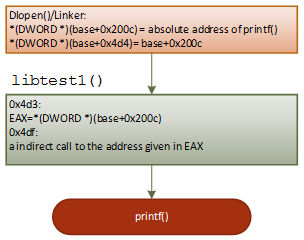 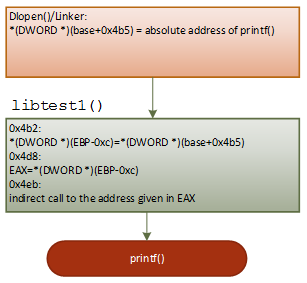 As shown in Figures 14-16, when the linker loads the dynamic library to memory, it first finds the name of relocated symbol printf, then it writes the real address of the printf to the corresponding addresses (offset 0x4b5, 0x4c2,0x4cf and 0x200c). These corresponding addresses are defined in the relocation section .rel.dyn. After that, the code in libtest1() can jump to the printf() properly.