Data centers are adopting distributed storage solutions based on commodity hardware to meet the requirements of cloud computing and big data analytics. These solutions include a large number of nodes working together to provide aggregated capacity and performance with self-managing, self-healing disaster recovery and load balancing. 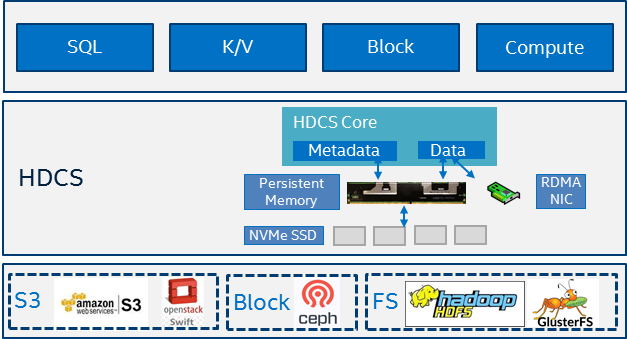 Figure 1 illustrates the general HDCS architecture. It is a distributed cache located on a compute node. HDCS is designed to be fast; it uses persistent memory as a buffer and NVMe* SSD as the warm tier. UNIX* domain socket and RDMA technology is used to bypass kernel TCP/IP overhead and move data from primary to secondary directly when doing replication. HDCS supports various storage backends including S3* object storage systems, Ceph* block systems, and the Apache Hadoop* Distributed File System (HDFS), where HDCS acts as a unified cache layer for storage systems with different interfaces such as S3*, block interface, and distributed filesystem interface.

HDCS supports two modes: cache and storage. In cache mode, data is stored in both local storage media (NVMe SSD/persistent memory) and backend storage, providing faster data access for mission-critical workloads or satisfying different SLA requirements. Either a write-through or write-back policy can be applied to cache mode. An unexpected process crash will not result in data loss, since by replication design the dirty data will be continuously flushed to backend storage once the crash occurs. In storage mode, data exists only in the local store before a flush action is triggered manually. In storage mode, HDCS is considered as a hyper-converged, reliable storage solution.

Inside one HDCS Controller, the key module that provides lockless persistent storage is called HDCS Core, which is responsible for handling all input/output (I/O) workflows to/from the virtual volume. As shown in figure 2, one HDCS Core is used to manage one virtual volume. Since HDCS uses volume-level replication, each volume has one primary HDCS Core in the local compute node, and one or more secondary HDCS Cores in separate nodes. The HDCS primary and secondary pairs are calculated by the HA Manager’s failure domain algorithm. HDCS Core directs the PMDK and RDMA libraries to bypass some kernel paths and avoid unnecessary memory copies, which enables HDCS to fully utilize CPU cycles, and maintain low consumption of total CPU and memory for computer nodes.

The design principle of HDCS Core is to build a lockless persistent-storage context for each virtual volume; which is to say, when a volume is opened by a virtual machine or an application, the HDCS Controller opens an HDCS Core context for this volume. A close call will trigger a graceful shutdown of this HDCS Core. HDCS Controller is a process context and a resource manager to all opened HDCS Cores. The HDCS Controller context also includes key information including HA modules, local data storage handlers, network connections, and an HDCS Core stat guardian. 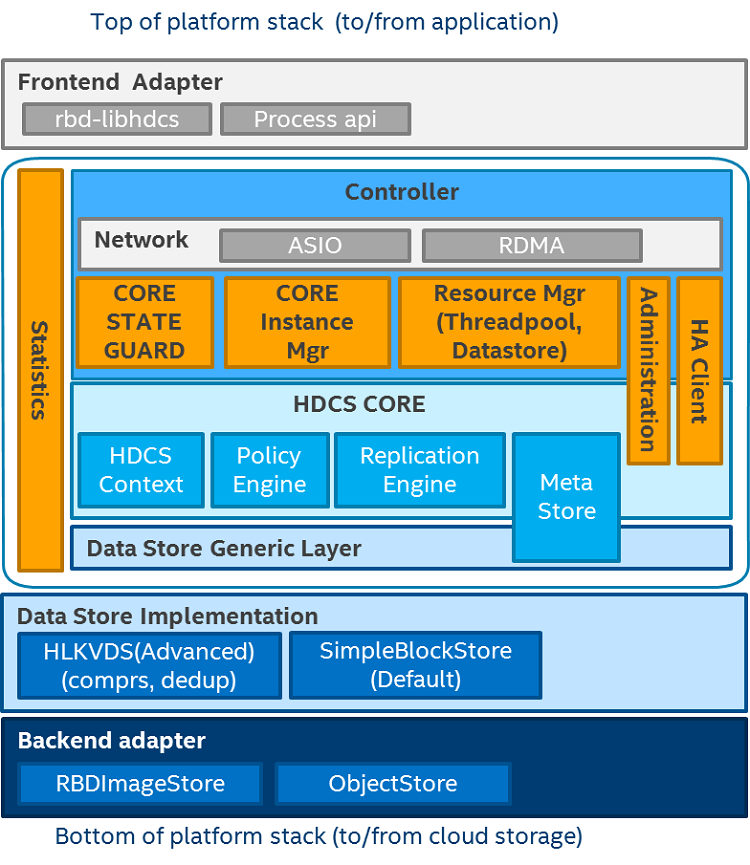 Figure 3 shows a detailed architecture of HDCS with all individual modules. Above the HDCS Controller, the Frontend Adaptor module is a lightweight layer used to interact with different interfaces, including the S3* interface, block interface, and filesystem interface, or any third-party interfaces developed following the adaptor API. HDCS Controller contains only an abstract API of the underlying local data storage and backend storage implementations. The HDCS data store is friendly to fast storage devices like NVMe SSDs or persistent memory. By design, it employs two different storage implementations. One is simple block-based storage that can be easily implemented on PMDK, and the other one is a key value data store that supports transactions and will also support advanced features such as compression and deduplication.

HDCS was designed to be optimized for persistent memory and new non-volatile memory (NVM) technologies. The storage hierarchy is new, and we designed a new architecture to better utilize it. 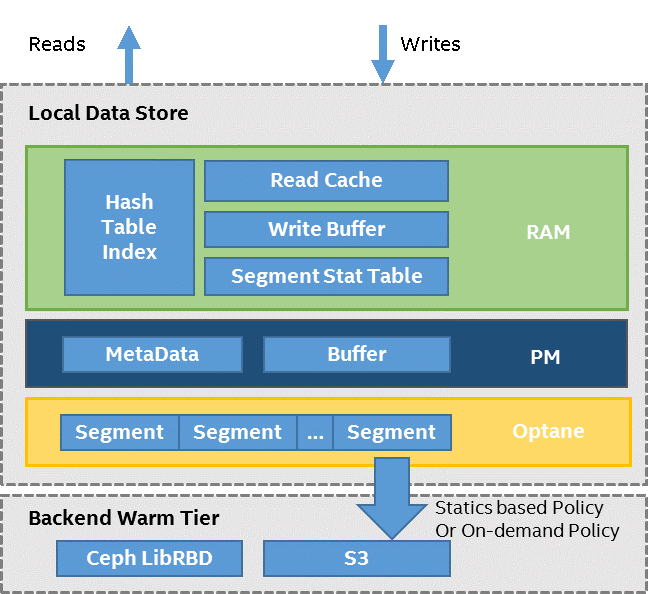 The HDCS hierarchical storage architecture works in a hybrid storage hardware environment that may include devices such as persistent memory and different types of SSDs with tiering capability. The read/write data are served by the DRAM layer first, then flow to the persistent memory layer as a buffer, and then are merged into segments at the SSD layer.

The key idea is that we provide a layer of semantic abstraction of a storage tier to describe generic primitives for space provisioning functionality, reclamation, data placement, and so on. These primitives allow a highly flexible tiered implementation, and enable us to define a caching or tiering topology across various storage types. We can exploit the capabilities of the underlying media, such as Intel 3D XPoint technology, which provides byte-addressability and comparable latency to DRAM.

HDCS also supports tiering data to remote warm/cold storage in addition to the high performance local hierarchical store. Different storage backend engines are provided in the backend adaptor. The HDCS Controller monitors usage of the datasets over time, and it uses this knowledge to move data between the storage tiers. Either policy-based or statistical models can be applied for statistics-based or user-triggered data movement.

Since HDCS is deployed as a hyper-converged architecture (the clients and primary are running on the same compute node), a UNIX domain socket can be used to bypass TCP/IP overhead for all local I/O. Replication supports the RDMA protocol, which moves data from primary to secondary directly. RDMA comes in various forms and is already very mature in high-performance computing. In HDCS, our RDMA implementation works both on internet Wide-Area RDMA Protocol (iWARP) and RDMA over Converged Ethernet (RoCE) V2 protocols. Use of RDMA decreases latency compared with TCP/IP, and also saves CPU cycles and memory.

HDCS supports volume-level replication to guarantee data reliability. It supports RDMA for cluster networks, which keeps the overhead of a replicated write relatively low. The replication number and consistency level (the number of replicas on which the write must succeed before returning an acknowledgment to the client application) are configurable to handle requirement tradeoffs between peak performance and good reliability.

The replication group is calculated by the HDCS HA Manager. As shown in figure 6, HA Manager collects information regarding HDCS Cluster map and the health status of all HDCS Controllers. It uses this information with a failure domain algorithm to produce replication pairs.

One common challenge of replication design is how to keep data consistent between primary and secondary. We chose a strong consistency model in HDCS, so when a crash occurs, a commit log inside the primary is used to make the data recover decision. An HDCS Core Stat Guard (shown in figure 2) is implemented to guard and switch states of all HDCS Cores. The HDCS Core has five states: error, inconsistent, read-only, degraded, and healthy. HDCS serves client requests in read-only, degraded and healthy mode. An error or inconsistent status returns an error code to applications and triggers a data recovery processes.

To simplify the performance testing process, we implemented a new FIO engine called libHDCS for block workload+ testing. For each test case, the benchmark result and system characteristics were measured by a benchmark tool name CeTune*. Volume size is set to be 10 GB. Page cache was dropped before each run to eliminate page cache impact, and each test was configured with a 300-second warm up and 300-second data collection. Detailed FIO testing parameters were included in the software configuration part.

Performance comparison with and without HDCS 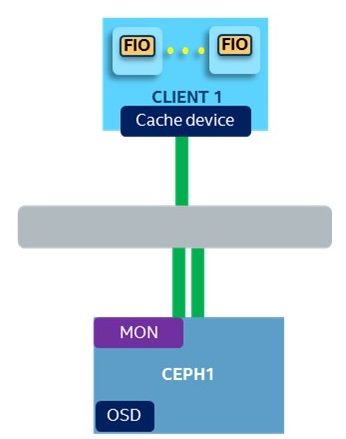 To evaluate HDCS performance in cache mode, we conducted 4k randwrite and randread tests on a single-node Ceph* cluster. Cluster configuration is illustrated in figure 7. Cache device, Ceph* Journal and object storage device (OSD) are using Intel® SSD S3700 Series and Ceph* replication size is set to 1. The only difference between the two comparison cases is use of HDCS.

Figure 8. 4k randread with and without HDCS on Intel® SSD S3700 Series.

Figure 9. 4k randwrite with and without HDCS on Intel® SSD S3700 Series.

Figure 13 shows the 64k randwrite performance using Intel Optane SSD P4800x as the HDCS local storage device for bandwidth-intensive workloads. Scaling the volume number from one to four shows a nice scalability from 851 MB/s bandwidth to 2153 MB/s bandwidth with a stable average latency below 1 ms, and 99.99th latency below 5 ms.

As the next step, HDCS will use Persistent Memory over Fabric (PMoF) to improve the efficiency of RDMA and persistent memory. This will enable low latency and high-speed remote replication of persistent memory over fabrics. PMDK includes the RPMEMD library, which implements this with a simple set of APIs. Figure 14 shows the architecture of this configuration. 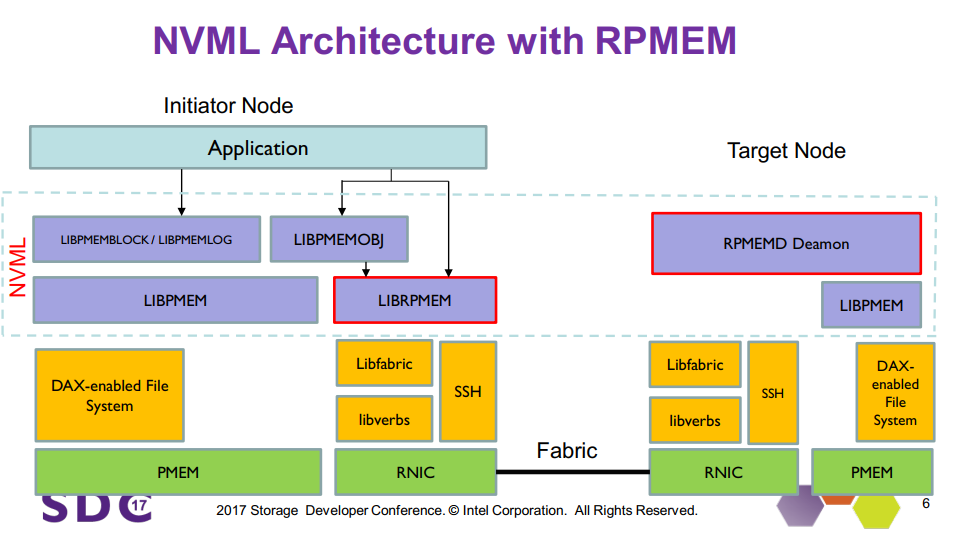 In this article, we presented a hyper-converged distributed cache storage system, HDCS, a hyper-converged cache and storage system for cloud and big data environments. It employs fast storage devices like NVMe SSD and persistent memory, and RDMA to provide highly reliable and highly available persistent storage solutions with extremely low tail latency. Performance testing results show that HDCS with Intel Optane SSD P4800x provides up to 58.9 times performance improvement when testing with and without HDCS. Using Intel Optane SSD P4800x as the cache device provides 1.48 times performance improvement and 75 percent latency reduction compared with the Intel SSD P3700 Series, which demonstrates Intel Optane SSD as an excellent choice to speed up OLTP workloads where tail latency is a critical SLA criterion. As a hyper-converged distributed cache store, there are multiple areas that can influence HDCS to improve the performance or reduce the cost, which remains our future work.