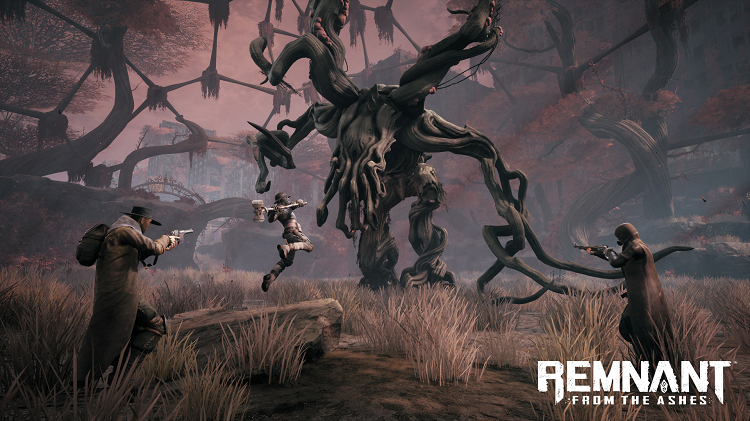 Independent studio Gunfire Games* is embracing new challenges with its upcoming game Remnant: From The Ashes*. Now in its fifth year in Austin, Texas, the 70-strong PC and console developer is expanding on its hack and slash development heartland by adding gunplay and co-op to its latest action adventure. Gunfire Games is betting big on Remnant: From The Ashes, and founder David Adams is sure it’s the right move.

The team at Gunfire Games has been through a number of incarnations prior to becoming masters of their own fate as an independent game maker. The core team was previously at Vigil Games*, a former THQ Nordic* studio. There they developed the successful Darksiders* and Darksiders II titles and honed their impressive skills in creating melee combat-based games. After a spell with Crytek*, the team decided to forge their own path, and in 2014 established Gunfire Games. “We figured, hey, let's take a shot, open our own studio, and see if we can do it better than everybody else," says Adams.

Gunfire initially developed a number of VR games for the Oculus Rift* — including the critically feted role-playing game Chronos — plus a remastered version of Darksiders II, and original sequel Darksiders III. However, all of that was just a warm-up for the headline act. Gunfire’s independence has allowed them to explore new ideas, while staying true to their approach. “One thing that unites all our titles is that sense of exploration and adventure,” says Adams. “Our ultimate goal when we started Remnant was to make a game where there's endless adventure.”

Remnant: From the Ashes is the realization of that vision. It’s a third-person action-survival game, with up to four players in online co-op, set in the universe they first created for Chronos. You play as a Remnant, one of the planet’s remaining few, tasked with overcoming the onslaught of demonic creatures called the Root. The genesis of Remnant was the kind of simple idea that emerges unheralded from an innocuous meeting or a quick sketch. The team quickly saw its potential as a vehicle for their gameplay aspirations, and began work to see how far they could run with it.

“We wanted a game that gave you that co-op experience,” says Adams, “but with something that was unexpected, something you've never experienced before.” That something is a world where the surprises never run dry. Everything from quests and campaigns to layouts and enemies are randomly generated, and the game is designed with the intention of adding more new content throughout its life. Players also have the ability to completely customize their character, further cementing the uniqueness of their experience.

Gunfire Games independence has been pivotal in giving the team the confidence to take on a challenge that might not have been viable in other circumstances.  “We control the intellectual property (IP), so we can pretty much make up whatever we want,” says Adams. “It's a blank slate, and it's a lot of fun creating that world.” As they approach launch with their publishing partner Perfect World*, the team recognizes the risk it’s taking, but wouldn’t have it any other way. “It's a really big bet for us as a studio,” concludes Adams, “but we think the game's awesome. We think it'll pay off big time.”

Remnant: From The Ashes is coming to PC, Xbox One*, and PlayStation 4* on August 20, 2019. Visit the official website for more details.