As the mobile computing market evolves, Google Android* has become one of the most popular software stacks for smart mobile devices. Because Java* is the primary implementation language for Android applications, the Java Virtual Machine (JVM) is key to providing the best Android user experience.

The garbage collector (GC) component of JVM is one of its most important. It provides automatic memory management, and ensures that Java programmers cannot accidentally (or purposely) crash the JVM by incorrectly freeing memory, improving both programmer productivity and system security. GC keeps track of the objects currently referenced by the Java program, so it can reclaim the memory occupied by unreferenced objects, also known as “garbage.” Accurate and efficient garbage collection is critical to reaching high performance and to the user experience of Android applications.

GC may interfere with user thread execution for garbage collection by introducing overhead and hence hurting performance and user experience. A typical example is that most GC algorithms require pausing all Java threads in an application at some point in order to guarantee that only garbage object memory is reclaimed. If the pause time is long, it can cause performance and user experience issues such as jank (unresponsive user interface or momentary sluggishness) and lack of responsiveness and smoothness. In addition, GC is usually triggered automatically by the JVM in the background, so programmers have little or no control over GC scheduling. Android developers must be aware of this hidden software component.

GCW for Android stresses the memory management subsystem of the Android Runtime (ART). It is designed to be representative of the peak memory use behavior of Android applications, so optimizations based on GCW for Android analysis not only improve the workload score but also improve user experience. Further, GCW for Android provides options for you to adjust its behavior, making it flexible enough to mimic different kinds of application behavior.

The workload has two working modes. You can run it from the command line or control it using a GUI. GCW for Android is configurable. You can specify the workload size, number of allocation threads, object allocation size distribution, and object lifetime distribution to fit different situations. It provides flexibility to test GC with different allocation behaviors, so you can use GCW for Android to analyze GC performance for most usage situations.

GCW for Android incorporates several metrics. It reports the total execution time as the primary metric of GC and object allocation efficiency. The workload also reports memory usage information such as the Java heap footprint and total allocated object bytes based on the Android logging system.

How to Run GCW for Android

For the Android platform, GCW for Android is provided as a single package: GCW_Android.apk. After installing the apk, clicking the GCW_Android icon launches the workload and displays a UI that includes Start and Setting buttons. 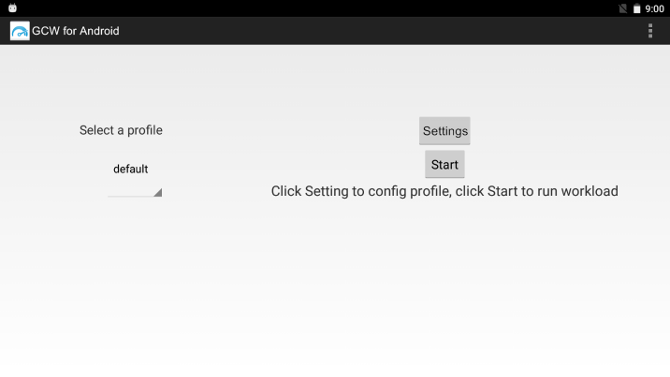 Clicking the “Start” button will run the workload using the default profile settings. The “default” settings option is used to reset the workload profile to the default. If you want to change the configuration, click the “Settings” button. 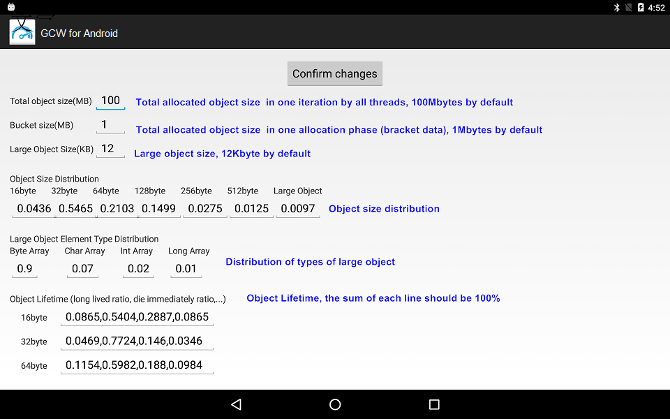 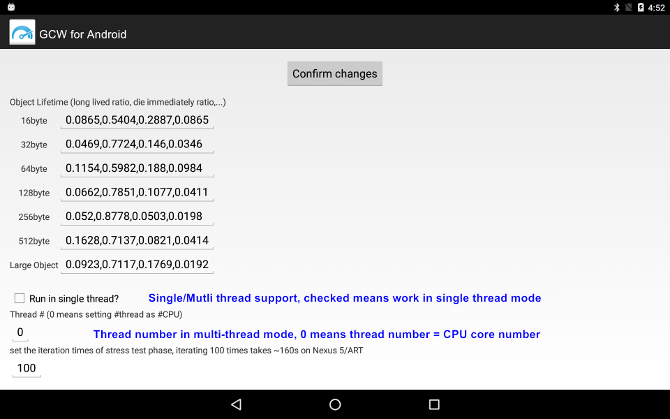 The first setting is a selectable list of profiles. For now, “default” is the only option. A profile consists of the parameters used by the workload, and the default profile is derived from the characteristics of several real applications.

Total Object size: Allows you to define the total object size allocated in one iteration by all allocation threads. The default is 100MB, which means that when running in multi-thread mode with four threads, each thread will allocate 25MB’s worth of objects in one iteration in the stress test phase.

Bucket size: allows you to define the size of the binary trees that are built in a single allocation phase. The default is 1MB.

GCW for Android is designed to mimic the JVM memory management behavior that real applications exhibit. Detailed analysis of different user scenarios on a large number of popular Android applications indicate that Java programs create various sized objects with varying lifetimes, so the workload does too. Also, the default relationship between object sizes and lifetimes (small objects tend to have short lifetimes) and the multi-threaded allocation behavior are similar to those of real applications.

Abstracted from the analysis data, the following characteristics were chosen as the primary design points for GCW for Android.

When running, around 80% of the objects allocated are small objects whose size is less or equal to 64 bytes. We observed the same behavior on ~50 more popular apps, so GCW for Android uses objects with many different object sizes. How GCW for Android models object size will be discussed in the next section “GCW for Android Workflow.”

Object lifetime is measured by how many garbage collections an object survives in the Java heap. Understanding object lifetime can help the JVM developer optimize GC performance by optimizing how GC works and tuning GC-related options.

In our investigations, the lines plotting object size against object lifetime show a loose relationship between the two, but lifetime does seem to be related to the object size. Here we choose Gallery3D (Figure 4) and Google Maps* (Figure 5) as examples. The X-axis is the percentage of objects that die; the Y-axis is the number of GCs that survive. Each line represents an object size range. 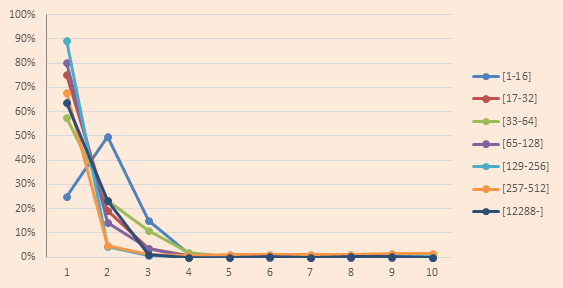 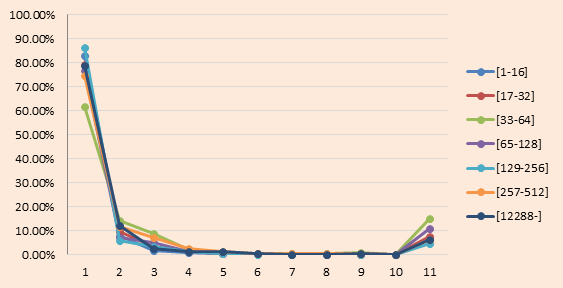 To summarize, the following workload characteristics are emulated in GCW for Android. Typical Android applications:

Putting all these observations together, we designed the GCW for Android workflow to make it not only a JVM memory management workload, but also one that reflects actual usage scenarios.

GCW for Android supports two threading modes: single- and multi-thread. While in multi-thread mode each thread is assigned a number, which is by default the logical CPU number. You can change it. 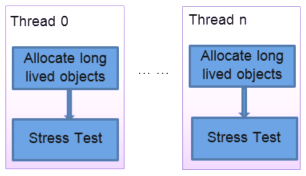 (b)
Figure 6. GCW for Android Workflow

Internally, GCW for Android builds several binary trees in order to manage object sizes and lifetimes. It builds and deletes objects by inserting and deleting nodes in the trees, as shown in Figure 6(b).

Figures 6(a) and (b) show how GCW for Android works. It first launches a certain number of threads, and then each thread follows the same logic: allocate long lived objects and then stress test. The stress test is the most time consuming part of the workload and is a big loop that iterates a configurable number of times, by default 100. In each iteration, GCW for Android allocates a configurable number of bytes (by default 100MB), which by default includes 6 kinds of small objects (16, 24, 40, 96, 192, and 336 byte objects) plus large objects (12K bytes, configurable). Small objects are created as nodes of binary trees; large objects are created as byte, char, int, or long arrays. In each iteration of GCW for Android, the workload:

Now let’s take a closer look at the internal design of GCW for Android to understand how it achieves the aforementioned characteristics of emulating memory system use.

To conveniently abstract object references, GCW for Android allocates small sized objects as nodes in a binary tree, and large objects are created as arrays. There are four types of large object arrays: byte, char, int, and long. 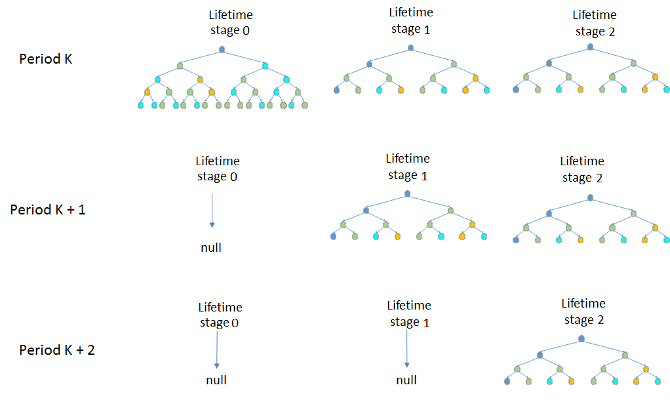 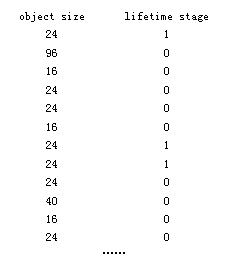 To recap, GCW for Android makes it easy to reflect the object allocation and GC behavior of real applications. Using GCW for Android can help you identify many opportunities in the ART to enhance performance and user experience.

During our performance investigation we discovered that object allocation is typically the hottest part of an application. Further investigation showed that allocation can be made faster by inlining the RosAlloc allocation fast path, which means the call to the allocation function is eliminated. That resulted in ~7% improvement on GCW for Android. The implementation has been merged into the Android Open Source Project (AOSP).

Additionally, we found that GC marking time can be reduced by eliminating unnecessary card table processing between immune spaces. The card table is a mechanism that records cross- space object references, which guarantee the correctness of GC when it collects only a subset of the Java heap (the subsets are called “spaces”) instead of the whole heap. Analysis also revealed that GC pause time can be reduced by clearing dirty cards for allocation spaces during partial and full GCs. Minimizing pause time is critical for end user apps because reducing pause time can reduce jank and improve smoothness.

We have submitted GCW for Android for upstreaming into AOSP to make it available to the entire Android development community. Our goal has been to make GCW for Android the most realistic Android Java memory system workload and use it to drive GC optimization on all platforms to improve Android performance and user experience.

The code can be downloaded from Google at