Identifying the face of a person to grant access to an application is a recent trend. Facial recognition has become a popular method to unlock phones, tag people on social media, and scan crowds for security threats. It has also gained popularity in gaming, grocery stores, airports, and payment platforms. Facial-recognition login software and biometric technology have set a new standard in security-relevant applications because they eliminate the need to remember passwords without compromising security. Further, facial recognition login can also detect and verify people's faces, regardless of whether they changed their appearance (a new mustache, for example) or are wearing eyeglasses.

According to FaceNet: A Unified Embedding for Face Recognition and Clustering, "FaceNet is a system that directly learns a mapping from face images to a compact Euclidean space where distances directly correspond to a measure of face similarity. Once this space has been produced, tasks such as face recognition, verification and clustering can be easily implemented using standard techniques with FaceNet embeddings as feature vectors."

The optimized solution described in this paper is based on the Intel® Distribution for OpenVINO™ toolkit, which can optimize trained models in frameworks like Tensorflow*, Caffe*, and PyTorch*, and then quickly infer.

The FaceNet model discussed here was converted to an optimized intermediate representation (IR) with the help of the Intel Distribution for OpenVINO toolkit and was then used to infer at a higher speed. The experiment was conducted on the Intel® Xeon® Platinum 8256 processor (at 3.80 GHz).

The optimized solution uses the Intel Distribution for OpenVINO toolkit to optimize the FaceNet model using the Model Optimizer tool, which creates an IR of the model. The IR representation, in the form of .xml and .bin files, is used to infer using a classification-inference engine sample from the Intel Distribution for OpenVINO toolkit. The usual postprocessing done in the sample is discarded because the feature vector from the FaceNet stage is directly fed to the postprocessing for the solution. The inferred feature vector is matched against an existing set of feature vectors using the distance measure to correctly identify the faces.

The IR conversion is done on the FaceNet model, as shown in the following example. See the Intel Distribution for OpenVINO toolkit documentation for code example details.

A snippet of the classification sample source code from the Intel Distribution for OpenVINO toolkit is shown below:

The remainder of the classification sample is skipped because the feature vector obtained in the res variable (line 6) is directly fed into the inference for distance calculations.

Table 1 lists the hardware configuration for the optimized and non-optimized versions of the solution.

Table 1. Hardware configuration for the solution

Table 2 lists the software used (and their versions) in the baseline and optimized solution.

Table 2. Software configuration for the solution

The time for FaceNet topology to infer a single image improved by 1050x. This measure does not consider preprocessing and postprocessing times. With more images, the margin slightly decreases. However, the Intel Distribution of OpenVINO toolkit version also performed significantly better than native TensorFlow inferences in such cases. Because face login applications process one image at a time, a  single-image comparison holds good for the comparison. 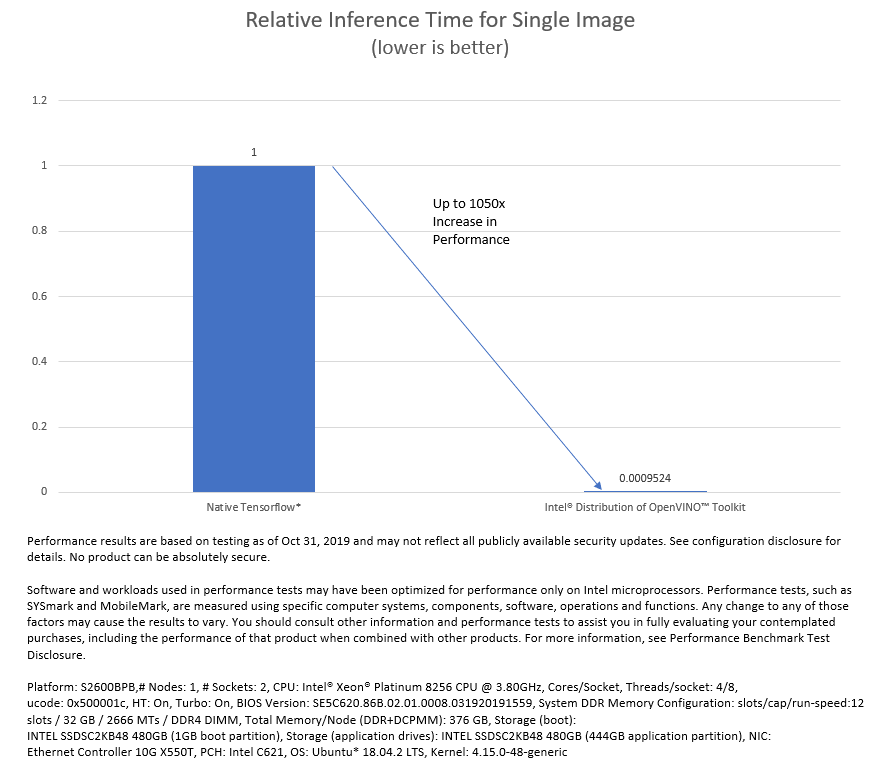 The inference time for FaceNet showed a 1050x improvement in time with the Intel Distribution of OpenVINO toolkit when compared to the native TensorFlow inference. Because of the optimization and resultant performance gains (less time), inference is a negligible part of the total processing of an image. The optimized solution had no impact on the recognition accuracy, and the feature vector returned in both the optimized and non-optimized versions were nearly identical. Further performance can be achieved by taking advantage of INT8 optimization coupled with Intel® Deep Learning Boost.

FaceNet: A Unified Embedding for Face Recognition and Clustering