It is a general misconception that GPUs are necessary to train deep learning (DL) models. There are many complex DL models that train more efficiently on CPUs using distributed training configurations. Intel® Xeon® Scalable Processors have built-in AI acceleration with Intel® Deep Learning Boost instructions. This article describes how to set up distributed training on a cluster using TensorFlow* and Horovod*.

TensorFlow is a widely used DL framework that is optimized for Intel® processors and other architectures using Intel® oneAPI Deep Neural Network (oneDNN), an open-source, cross-platform library for DL applications. The TensorFlow optimizations enabled by oneDNN accelerate key performance-intensive operations, such as convolution, matrix multiplication, batch normalization, and many more. Horovod is an open-source package that facilitates distributed DL with TensorFlow and other popular frameworks such as PyTorch*. It is widely used to train models across multiple GPUs and CPUs.

AI Arena is an open platform presented by Tencent for the research of multi-agent intelligence and complex decision-making. The platform includes a wide range of services that can help AI researchers to build their experiment environment conveniently. Tencent has shown a real-world case of building an AI agent in the smash-hit mobile game Honor of King with AI Arena platform, which involves multi-agent competition and cooperation, imperfect information, complex action control, and massive state-action space. This AI agent could make players have more fun to enhance game playability. We present a case study of Tencent’s production-level model training on a 16-node cluster comprised of Intel Xeon Scalable Processors, achieving up to 15.2x speedup over a single node.

You can either use a prebuilt Docker* container with TensorFlow with oneDNN enabled, which has everything you need:

Use the following commands to run distributed TensorFlow using the Horovod framework on a Linux* cluster. First, set the following environment variables:

Before starting the training, we can find out how many sockets are in the system using the following command:

Use the following command to run the training on one server with two sockets. Here, the total number of workers is two:

To run the training across four servers, each with two sockets, use this command. Here, the total number of workers is eight (one worker on each socket).

To run on eight servers, each with one socket, use this command. Here, the total number of workers is also eight.

As you can see, you can scale the number of servers up or down depending on the time-to-train that you want to achieve for your model. Time-to-train is expected to scale almost linearly with the number of servers used. Hyperparameter optimization is also done, as it would be for training on multiple GPUs. The learning rate and effective batch size can often be scaled by the number of workers. An increase in the learning rate can often compensate for the increased batch size.

Wukong AI*, an artificial intelligence program, playing Honor of Kings, a popular MOBA game published by Tencent, exceeds the performance of top-professional player. Wukong AI uses reinforcement learning (RL). The goal of RL is to select and optimize appropriate policies to strengthen the AI agent. Selection of these policies can be optimized in deep RL training. Distributed training is used to scale the training process to multiple RL learners on the cluster of 2nd Generation Intel Xeon Scalable Processors.

We started off on a single node and single worker to measure the baseline performance, then scaled up to more workers until we reached the desired time-to-train. We achieved the required performance with 16 nodes. In this case study, distributed training gave up to 15.2x speedup over the baseline performance (Figure 1). This is nearly linear speedup with distributed training on our Intel Xeon processor-based cluster. 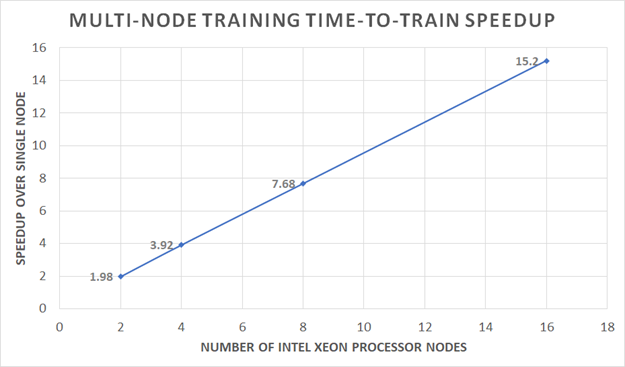 Stay tuned for more blogs and articles as Intel adds more hardware acceleration in the next generation Intel Xeon Scalable processors and software acceleration to continue to meet users’ needs.

You can get more information from the following sites:

For help with technical questions, visit the following communities and forums to find answers and get support: