This article describes a Software Defined Networking (SDN) enabled wireless network using Intel hardware, Open vSwitch* (OvS) and Faucet*, which is an open source SDN controller. Instructions on how to configure this network are included.

Why an SDN-Enabled Network? 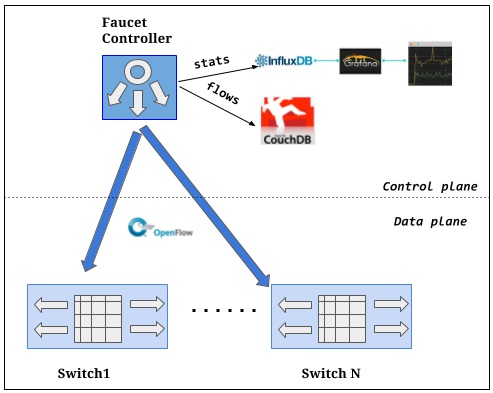 Unlike a traditional L2/L3 switch, an SDN-enabled switch provides for control and data plane separation. In the above illustration, Faucet represents a controller, and OvS can represent a data plane switch. With the use of standards-based OpenFlow* protocol, you don’t have to write device-specific drivers to handle various switch data paths. Additional advantages include the following:

Refer to Faucet presentations and articles for more detailed information. 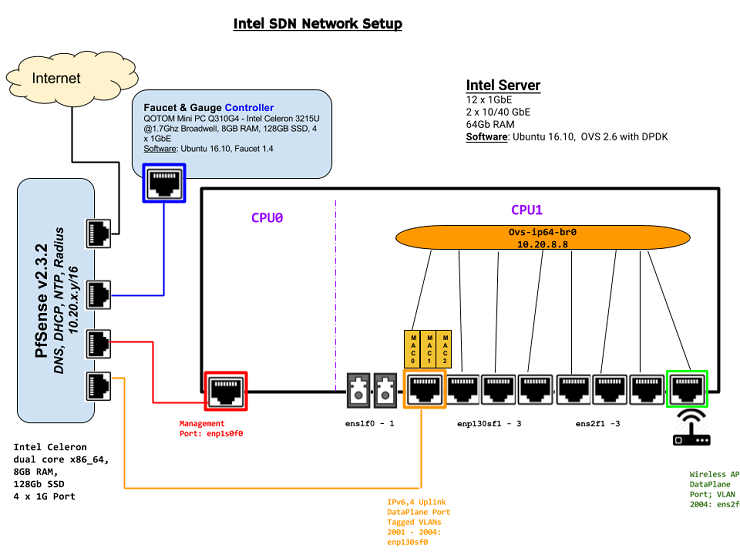 The figure above shows the network configuration. The Intel® processor-based server hosts the OvS (v2.6) software on Ubuntu* v16.10 to serve as the OpenFlow switch data plane. Another Intel® Celeron® processor-based box (QOTOM Mini PC) running Ubuntu 16.10 serves as the host for the Faucet and Gauge* controller. A pfSense*-based router is used for network isolation.

Setting Up the Software

Download and install the open source PfSense router software on an Intel processor-based box (example: QOTOM Mini PC). Most of the required services run out of the box on installation.

This section lists the steps for getting OvS working as a software switch. Here we will make sure all the connectivity and software stack works.

In this article, we learned how simple it is to configure an Enterprise grade, fully programmable SDN Wired/Wireless network using off-the-shelf Intel x86 Hardware and Faucet SDN Controller software. This setup enables on-demand programming for security and network operations scenarios.

Shivaram Mysore has been a serial entrepreneur, proven results oriented business leader and recognized technical expert in Security (Cryptography, Identity, Web Services, XML) & Networking (SDN). He has worked for companies such as Sun Microsystems (Sunlabs/JavaSoft), Microsoft, Infoblox, consulted for fortune 500 companies apart from contributing to development of many industry standards at W3C, ONF, PC/SC Workgroup and ANSI . Currently, he contributes as a core team member to Faucet SDN related open source initiatives and helping organizations deploy SDN.  He can be reached via shivaram dot mysore at gmail dot com.