Intel has defined an extension to OpenCL*  version 1.0 and newer, allowing applications to directly access images embedded in Microsoft DirectX* 9 (DX9) media surfaces, without first copying them. For OpenCL v1.2, the Khronos standards organization has defined a standardized extension for the same purpose. Intel® Quick Sync Video (QSV) is able to decode video images into DX9 surfaces.  The Intel and Khronos extensions can significantly improve performance of applications that use OpenCL to process QSV video frames. These benefits can apply to a range of applications, including video enhancement during playback, video editing with effects, and video generation and encoding

QSV supports video decode and encode acceleration by Intel® processor graphics and can be accessed by applications using the Intel® Media SDK.  The Intel Media SDK and Intel® SDK for OpenCL™ Applications are distributed as part of both the Intel® Media Server Studio1 and the Intel® Integrated Native Development Environment (Intel® INDE) 2.  OpenCL3 is a framework for developing applications to take advantage of heterogeneous platforms. In the case considered in this article, these platforms consist of a CPU and a programmable graphics unit, with parts of the application executing on both to achieve improved processing efficiency and performance.  The Intel defined extension to OpenCL v1.0 (and usable on subsequent versions) enables direct access to DX9 media surfaces created by QSV.

QSV media surface sharing with OpenCL can avoid many surface copies between QSV and OpenCL kernels. If an application tries to apply an OpenCL filter to QSV video without surface sharing, it will need to copy QSV output surfaces to OpenCL image objects so that the OpenCL filter can consume the data. This copy will get more time-consuming as the resolution of input video increases, as there is more data to copy.

Figure 1 shows an example of this, in which OpenCL is used to modify a video stream. Video frames decoded by QSV into DX9 surfaces are copied from the GPU to the CPU, then copied to an OpenCL memory object, copied from CPU to GPU, processed in OpenCL with the output copied back to the CPU, then copied into a DX9 surface and finally copied back to the GPU for video encode by QSV. With shared DX9 surfaces, none of these copies will be needed. 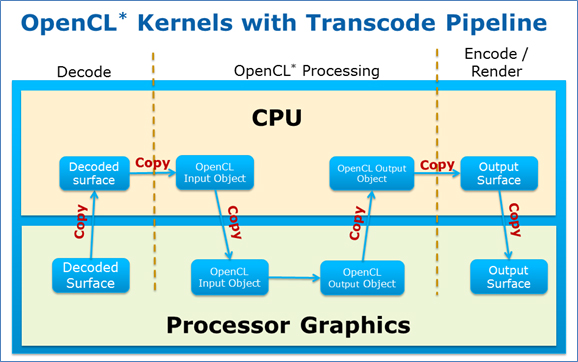 Using the Intel DirectX 9 media surface sharing extension of OpenCL , a DX9 image surface in the NV12 format (used internally by QSV) can be converted directly into an NV12 OpenCL image2D memory object without copying, and vice-versa, as shown in Figure 2. This can avoid the extra data copies to convert video frames going between QSV and an OpenCL filter. So for a transcode application, the shared media surface extension can save at least two extra memory copies. 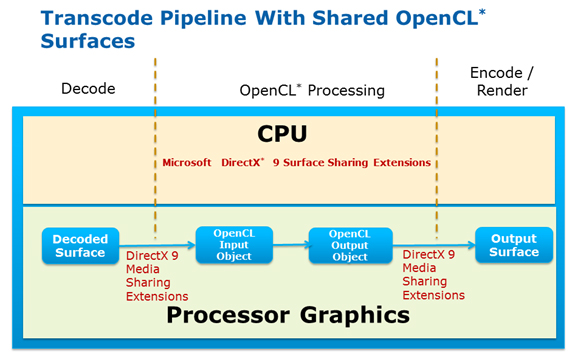 Using the above API extension, the OpenCL API can be enabled to execute kernels that read and/or write memory objects that are also DirectX 9 resources. An OpenCL 2D image object can be created from a DirectX 9 media surface resource. OpenCL memory objects may be created from DirectX 9 objects if and only if the OpenCL context has been created from a DirectX 9 device.  That is, the OpenCL clCreateContext or clCreateContextFromType functions must be called with a properties list that includes the property CL_CONTEXT_D3D9EX_DEVICE_INTEL  paired with a pointer to the IDirect3DDevice9 created for QSV.  (More information on this can be found in  “Intel Extension for DirectX 9 Media Sharing”. 4)

clGetDeviceIDsFromDX9INTEL: This function is used to query OpenCL devices corresponding to DirectX 9 device on a particular platform. The application should create the OpenCL context from DirectX 9 device.

Applications can query the properties of the media surface object created from the DirectX 9 resource by using clGetMemObjectInfo and clGetImageInfo functions.

clEnqueueAcquireDX9ObjectsINTEL: This function is used to acquire OpenCL memory objects that have been created from the DirectX9 resources. The OpenCL memory objects created from DirectX 9 resources must be acquired before they can be used by any OpenCL commands queued to a command-queue. This function provides synchronization guaranteeing that any DirectX calls made before clEnqueueAcquireDX9ObjectsINTEL is called will complete execution before the execution of any subsequent OpenCL APIs submitted to the command-queue.

clEnqueueReleaseDX9ObjectsINTEL: This function is used to release OpenCL memory objects that have been created from the DirectX9 resources. This function provides the synchronization guaranteeing that any calls to DirectX9 resource made after the call to clEnqueueReleaseDX9ObjectsINTEL will not start executing until after all events in event list of this API are complete and all work already submitted to the command-queue completes execution.

To use this extension API, the application must first obtain a pointer to each of the corresponding functions.  For OpenCL v1.0 and v1.1, use the standard OpenCL function clGetExtensionFunctionAddress, passing it the extension function name as a string.  The file cl_ext.h in the Intel® SDK for OpenCL™  distribution contains function prototypes (with “_fn” appended to the API name) that can be used to correctly cast the function pointers.

In OpenCL version 1.2 and newer, Khronos has added an equivalent standard Khronos extension.5  Using that extension, the equivalents of the above API names become:

For both Intel and KHR extensions, the OpenCL functions clGetPlatformInfo and clGetDeviceInfo can be used to get a list of named extensions supported by an OpenCL implementation, to verify that the desired extension is supported—either cl_intel_dx9_media_sharing for the Intel vendor-specific extension to OpenCL v1.0 or v1.1, or cl_khr_dx9_media_sharing for the OpenCL v1.2 Khronos standard extension.  It is also worth noting that other DirectX surface sharing extensions have been created, and are also documented on the Khronos.org site.

The application needs to do the following to use an OpenCL plug-in inside Intel Media SDK:

The application needs to include “mfxplugin.h” in addition to other Intel Media SDK files.

The application needs to implement the following callback functions, which are registered through MFXVideoUSER_Register:

There are multiple use cases in which QSV and OpenCL can interoperate. 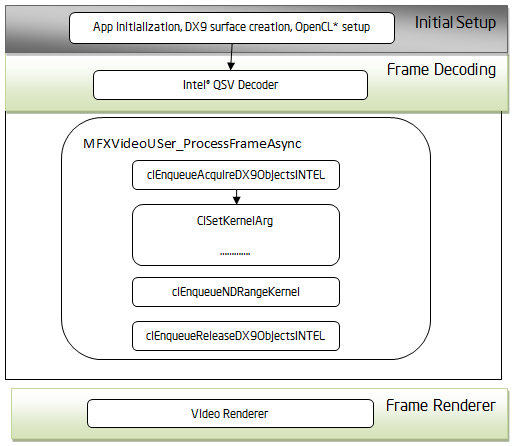 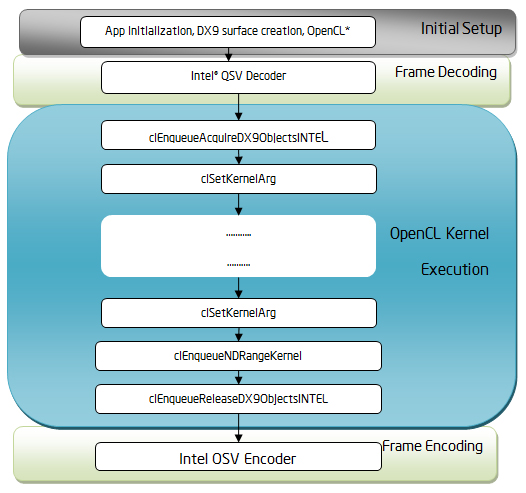 In each of these cases, the four distinct steps are: initial setup, frame decoding, OpenCL filters, and final video frame processing.

OpenCL can be used to accelerate a range of video processing applications, and using the Intel or Khronos DX9 media sharing extensions will help insure the best possible performance by minimizing surface copy overhead.

Examples of applications using a combination of OpenCL and QSV include video editing, in which OpenCL is used to apply special effects or video transitions (such as blending two decoded video frames, and encoding the result); video playback with image enhancement prior to rendering for display; and algorithmic video synthesis, for example creating motion video by manipulating and animating still images and subsequently encoding the resulting sequence of frames.

Again, it is important to note that the minimum amount of image surface copies can be obtained only by having OpenCL accept and process frames in NV12 format from QSV, and/or deliver to QSV in the same format. If color conversion is required, for example NV12 to (or from) an RGB format, a developer may be able to merge that into the OpenCL processing pipeline as part of the first (or last) kernel to process the image2D object, thereby avoiding an added pass through memory. If QSV is asked to do the color conversion as part of its post processing, it will be a separate processing stage and additional pass through memory.

The best example code for understanding how to integrate OpenCL-based plugins into a QSV pipeline is provided as sample code, available on the Intel® Developers Zone.8 The Intel Media SDK code samples also include an OpenCL sample, but that sample does not use the DX9 media surface sharing extension.

Tom Craver is an Intel application engineer in Chandler, Arizona. He is currently focused on performance of applications using OpenCL on Intel processor graphics, but has extensive background in SIMD, OpenCL and threaded parallel coding for performance, primarily for media applications such as audio and video codecs and video effect processing.