I began working with Virtual Reality (VR) through the Intel® Software Innovator program a month or so ago, after working mostly on Internet of Things (IoT) and AI projects since January 2017. Earlier this year, I submitted an idea based on one of my previous commercial projects that is now open source: retailAI. I received a new beta release of the Oculus Rift* developer kit from Intel to work on my idea and take it to the next level. This proof of concept (POC) will demonstrate an artificially intelligent virtual store assistant you could talk to for assistance in finding virtual products. The proposal includes combining VR, natural language understanding, voice synthesis, voice recognition, and IoT to create a virtual AI that can communicate through speech and hearing.

This is the first article in a series that will take you from a completely blank VR canvas to a fully functioning AI that can provide product information and display virtual products on request. It documents my initial steps in creating my first VR project using an Unreal Engine* 4 and an Oculus Rift* to create a functioning VR store assistant with artificial intelligence. The project is a work in progress that will be updated regularly.

Getting Started with VR

Getting started with VR is not as difficult as you might think. Many companies are creating assets and templates that can have you up and running quickly, breaking down the barriers to entry.

What Will We Make? 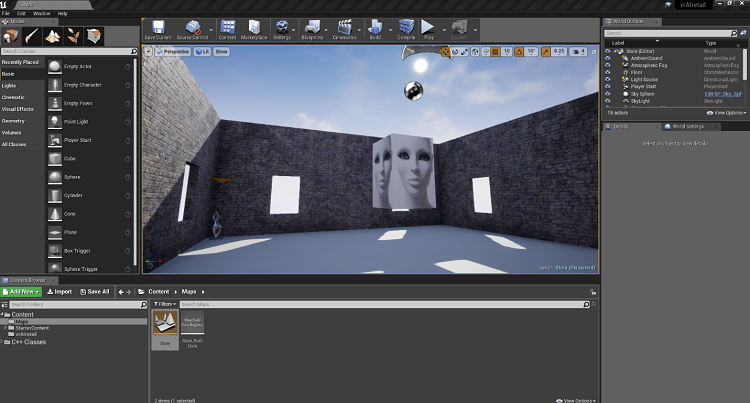 The project uses the iotJumpWay platform allowing you to communicate with your own back-end applications and ordering systems using MQ telemetry transport (MQTT) and APIs. The following steps will take you through the required tasks: 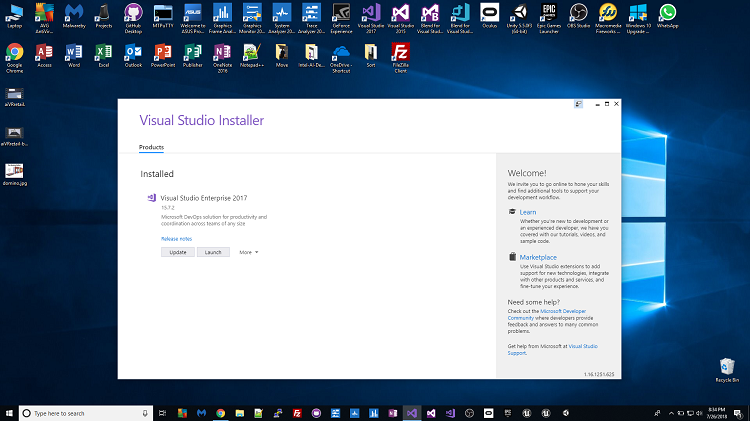 Install Unreal Engine and Visual Studio 2015. (For this project, be sure to use the 2015 version.) In addition to Visual Studio, install the C++ extras as well.

Download the full code by cloning the repository linked below to your development terminal.

Note: This is my first time sharing an Unreal Engine project to GitHub*, so if anything does not work, please alert me via the repository’s issues section below.

When the repository has downloaded, locate the project files in Oculus-Examples/Rift/vrAIretail.

Create a new Unreal Engine 4 project. Use the Basic Code template, as shown in figure 5 (below). 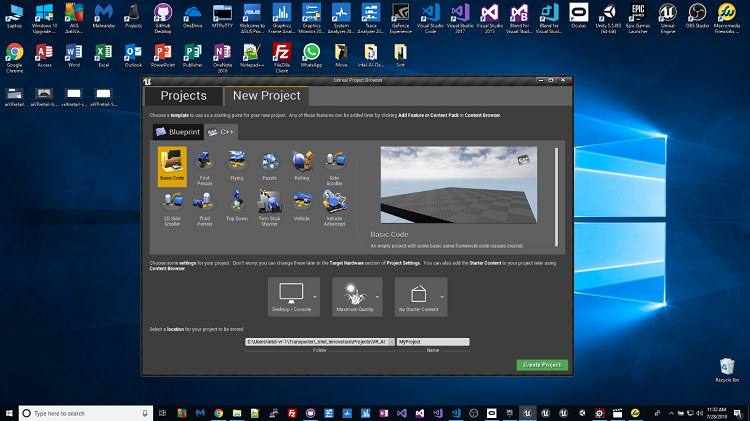 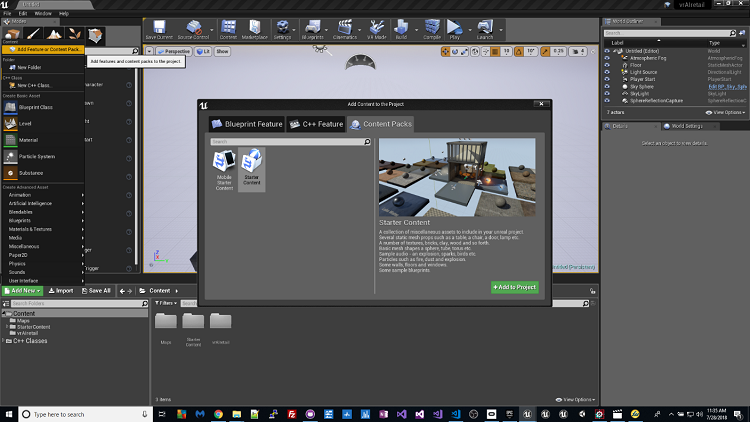 The video below describes how to use the Unreal Engine starter content to create a room.

After following the above tutorial, you should end up with a completed room. The screenshot in figure 7 shows the beginning stages of a yet-to-be-completed room. 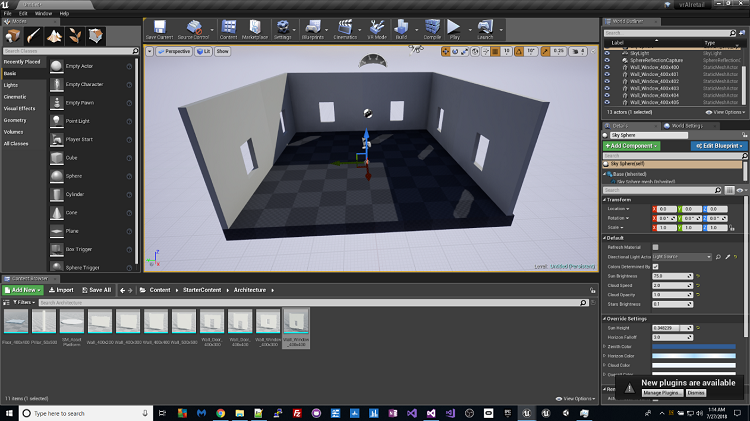 Add flooring and paint/decoration to the walls using materials in the Details section of the UI. (See figure 8.) 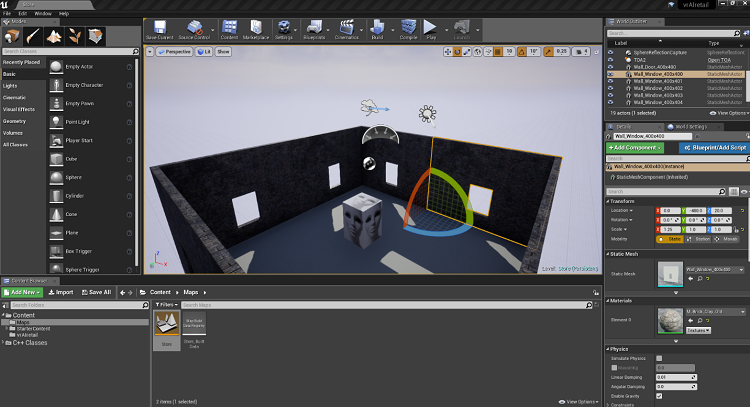 Figure 8. Adding flooring and paint/decoration to the room.

For our store assistant we will use an Unreal Engine actor, an object that supports scale, rotation, etc. For more information, check out the UE4 docs.

Now right-click in the Content area and select New C++ Class. Select Actor as shown in figure 9 and complete the steps to create the actor. 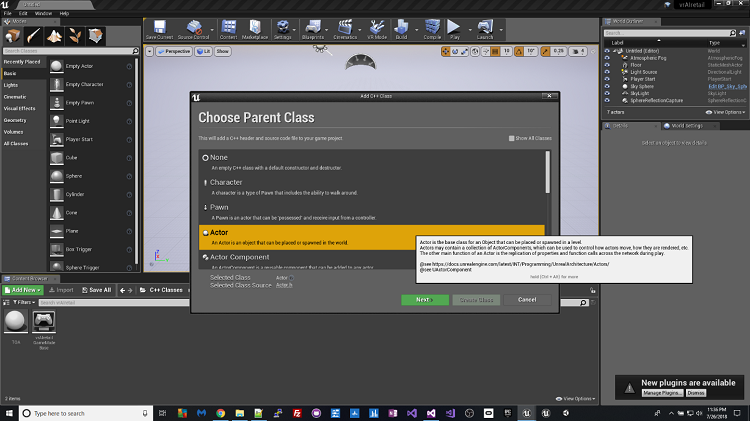 Once you have created the actor, Visual Studio 2015 opens. This provides access to the C++ source code for your project and actor, as shown in figure 10. 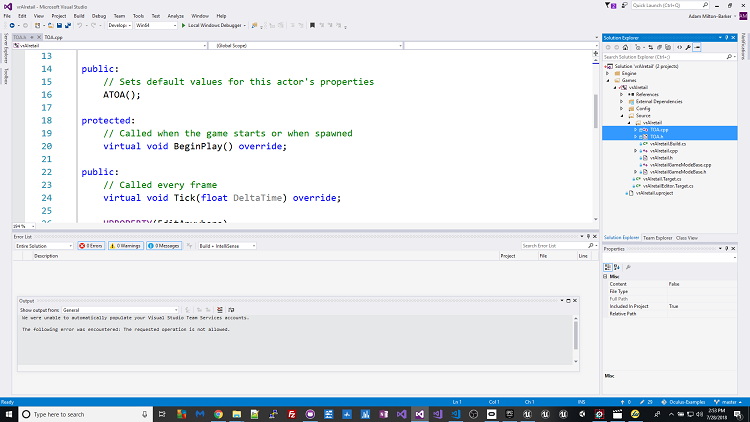 I created the actor labeled TOA. You can access the two actor files (highlighted) on the right-hand side of the screen, and hyperlinked here TOA.cpp and TOA.h.

The code in these files makes the actor spin. This spinning Actor will be the store assistant.

You should now have two newly modified files, TOA.cpp and TOA.h. Your new version of TOA.h should now look like the below code for example:

Go back to Unreal Engine and click and drag the Actor into the scene. Click Add Component and select Cube – you can then use materials, the same as you did for the walls and floor, to add an image for your AI. (See figure 12). 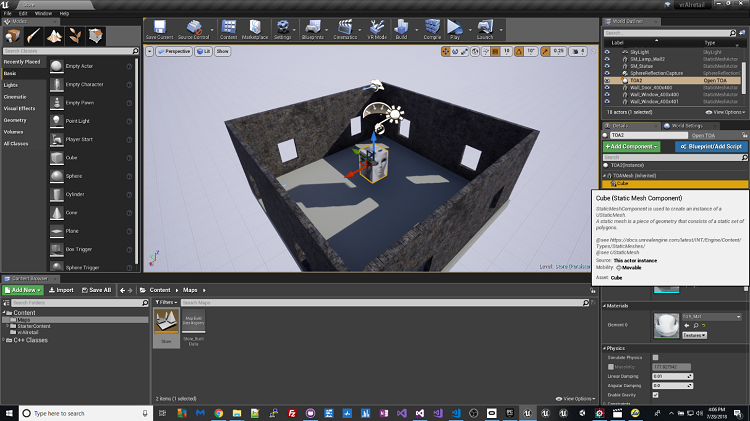 Figure 12. Adding a cube to the room in Unreal Engine*.

Microsoft SAPI is a popular speech synthesis and voice recognition tool. I have used SAPI in several previous projects such as my Arduino* World’s Largest Maker Challenge entry and my earlier Online Intelligent Systems Core and AI CPP programs. Having already used SAPI, I was aware of how to use it to program applications, but this was the first time I had noticed any issue with threads.

I found a few plugins that had previously been used by developers, but none were functional, so I set about creating my own solution using the experience from my earlier involvement in AI with my projects.

The code provided in the TOA files (TOA.cpp code shown below) already includes the functionality for the actor to say a few words on startup.

At this stage you can run the program on your headset. When the program starts, the Actor should say “Hello, welcome to the VR AI Retail Store.”

I discovered that SAPI initially blocked the main application thread so that speech was heard before the VR loaded, as demonstrated in the video below.

To prevent SAPI from blocking the main thread, I created the following function to home the SAPI code, provided in the TOA.cpp file above:

This wrapped everything required for the application to say something into its own function, called Welcome. Next, I replaced the original code with the following, which made an asynchronous call to the Welcome function:

Watch the spoken introduction in the video below.

I use SemVer for versioning. For the versions available, see Oculus-Examples/releases.

This project is licensed under the MIT License- see the License file for details.

I use the repository issues to track bugs and general requests related to using this project.

This first article in the series walks through the steps to go from a blank VR canvas to an actor that will welcome you to your virtual store. Future articles will be added to the series to walk through implementing speech recognition and how communication is handled with a natural language understanding engine.

In March 2018 Mr. Milton-Barker joined Bigfinite in Barcelona as an IoT network engineer, working on a team developing and maintaining the core IoT features of their platform.

Since January 2017 he has been an Intel Software Innovator working on projects in the fields of IoT and AI /Machine Learning. His activities have included mentoring hackathons and demonstrating his open source projects at various Intel events around the globe. He also gets to test some really cool tech, as Intel provides him with project support, demonstration opportunities, and hardware/software/platforms. Mr. Milton-Barker is currently involved creating projects that integrate IoT, VR and AI.

In the last five years he has open sourced many of his development projects, including deep learning for detecting breast cancer, an NLU engine, and various computer vision projects. He has also created the iotJumpWay, an IoT PaaS originally meant to be a product but opened for free for developers to learn how to build intelligent automated homes. For more information visit: http://www.AdamMiltonBarker.com.