Intel is working with a variety of laptop manufacturers to bring a striking new form factor to market: the companion display laptop. This innovative design provides up to a 50% increase in screen real estate vs. a standard laptop, which allows ample space for PC gamers to easily relocate their chat app or internet search window and shift other common multitasking functions to the companion display. More significantly, from a game developer perspective, the companion display is also an ideal location to offload screen elements such as maps, inventory, stats and other overlays, which might otherwise obscure the game.

The companion display concept is extremely appealing to users; a research study conducted by Intel in late 2018 reveals gamers are enthusiastic about where this class of device is headed. They are particularly interested in the ability to have a more immersive gaming experience by offloading any functions that stand between them and their view of the game. 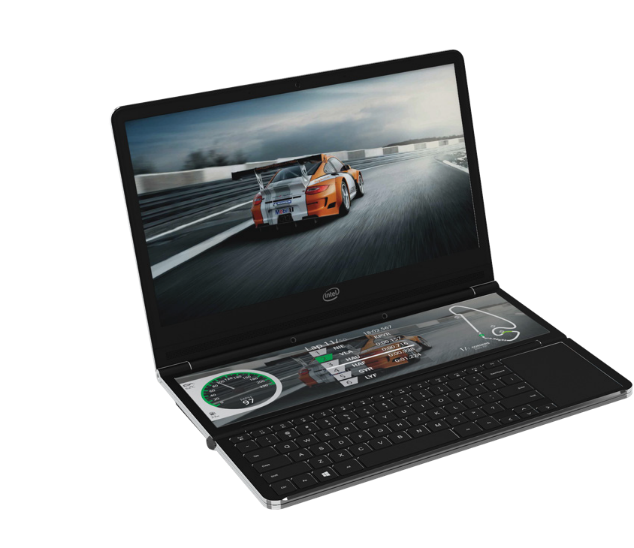 “Why didn’t someone think about this years ago?”

If the appeal of the new device is not enough to persuade you to think about offloading some of your user interface (UI) elements to the second screen, consider this: recent data from one of Intel’s partners suggests that up to 40% of PC gamers already use a second monitor for gaming and productivity. With effective planning, most games can be reconfigured to run on both companion display laptops and existing multi-monitor setups, since they both take advantage of extended displays. Game developers who incorporate support for dual monitor functionality now can delight a large and growing population of existing users, while simultaneously designing for a new generation of laptops.

Laptop manufacturers are currently experimenting with a variety of screen sizes and layouts, as well as different hinge configurations. The first new systems are expected to be announced in 2019, with more advances to follow.

Companion Displays Are the Future

A standard laptop has a single screen facing the user, and a keyboard and trackpad on the base. Now, some manufacturers are moving the keyboard closer to the user, abandoning the trackpad, and adding a half-height, full-width screen above the keyboard. Others envision adding a hinge to allow angling the companion display and multiple manufacturers are considering adding smaller, phone-size screens in various locations.

Multitasking while playing games on a standard, single screen laptop often requires keystrokes or alt-tab to move through programs. This breaks immersion and decreases focus. Additionally, open application icons and windows clutter the screen and distract from play.

A companion display allows moving functions, controls or menus that normally take up primary screen space or obscure the game. Users can offload game items such as inventory, maps, player stats and competitor information. Intel’s user research revealed that the two items gamers consistently discussed offloading were maps and inventory. Most participants saw putting inventory down on the companion display as a significant advantage because these items are often hidden from the screen during game play.

Users sometimes struggle with multiple monitors. Swiveling from left to right can strain the eyes, neck and shoulders. Simply glancing up or down is ergonomically preferable to moving the head.

Several laptop manufacturers are experimenting with configurations that include either a companion display that is slightly angled toward the user in a fixed position or a companion display with a hinge that allows the user to determine the optimal angle. Both solutions enhance ergonomics and reduce muscle fatigue.

A variety of companion display sizes may be integrated into laptops, from six-inch phone-type displays to full-width, half-height screens. Users may also have one or more external monitors plugged into their laptops to leverage even more screen real estate. Application developers wishing to take advantage of the companion display should follow good multi-display coding practices and application layout. For example, when developing applications that may use companion displays, the application should do the following:

To ensure their software takes full advantage of the new devices, developers should also consider how to leverage touch, hardware settings, and system performance on these new laptops as they would on any platform.

The companion display is also an ideal location to offload screen elements, such as maps, inventory, stats and other overlays, which might otherwise obscure the game.

Additionally, users want to move the cursor seamlessly between the upper and lower screens, with an up or down motion, rather than side to side. This should be the default position of the companion display relative to the primary screen. However, users may want to change the relative position of the companion display to the primary screen, so application developers should not assume that the above/below positioning is always the case. This means that application windows or UI elements should not cross a screen boundary (for example, a single window should not be resized to span both primary and companion displays; rather, two separate application windows should be created and displayed on each screen appropriately).

On initial designs, the companion display screen will be 50% smaller than the upper, primary screen. Aspect ratios, screen resolutions, and the physical size and location will vary by manufacturer. Developers should ensure they identify the upper screen as the “main display” in Windows® 10 display settings.

Keep in mind that the two screens may use different settings, and that these are user-configurable. The software must be able to react to objects or application windows being moved by users across screens with different configurations.

Flexible software designs will have to handle performance differences between primary and companion display seamlessly. Features such as touch, gesture mapping and pen points should be taken into account. 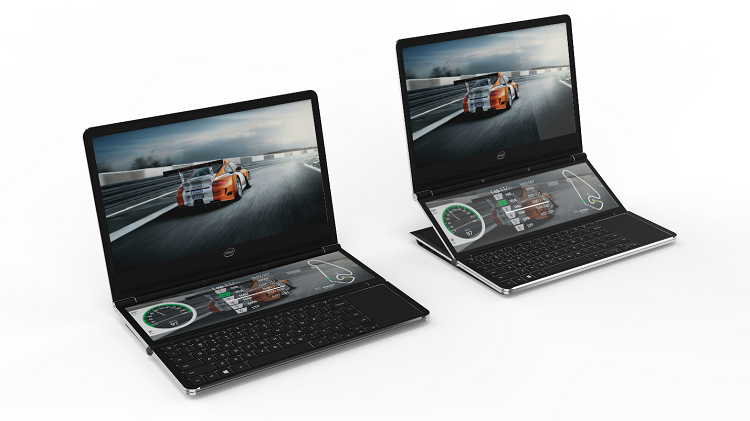 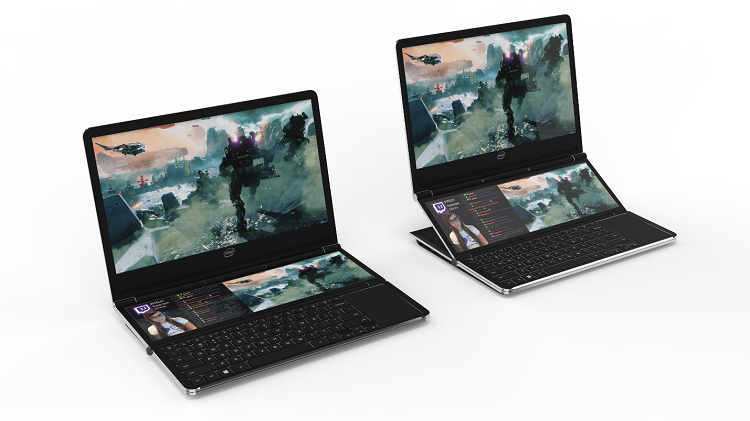 The developers reported no perceivable performance differences between the two while running the game. However, matching the brightness and display characteristics required fine-tuning. As a result of the case study, the developer has decided to implement multiscreen support in their production game, handling any companion or extended display using these design mechanisms.

With their architecture, the UI on the companion display was created entirely with HTML/Javascript*. To put previews on the second screen, their engine provided that screen’s web UI extension window with WebGL* textures. The team reported that they could rebuild their application to use companion displays with minimal changes to their code.

In addition to using CSS, UWP application development for multiple displays can be accomplished using existing practices and UWP mechanisms provided by Microsoft*.

Good responsive design and use of these mechanisms can automate the application’s response to various screen positions, sizes, and scaling. Two helpful UWP code samples are provided by Microsoft:

The third project used Unity* software. It used well-documented technology that allowed up to eight views of a game to be displayed on up to eight monitors simultaneously. This offers potential advantages for PC games, arcade games, and public installations.

As explained in their manuals, the default display is one monitor, so developers must explicitly activate additional displays via scripting, using Display.Activate. Once activated, they cannot be deactivated.

The best time to activate additional displays is on creating a new Scene. A good way to do this is to attach a script component to the default camera. Make sure you call Display.Activate only once during the startup.

You may find it helpful to create a small initial scene to test additional displays. Game view can be used to evaluate the look of the primary and companion displays.

Get Started Today with Companion Displays

This new breed of laptop offers interesting possibilities for developers to create unique gaming experiences. A companion display enables you to remove distractions from the primary screen, so gamers can focus on the game and developers can add information that helps them. When designed right, any changes that are made for the companion display will work seamlessly on a dual monitor setup as well.

Updating PC games to take advantage of companion displays can be very straightforward regardless of your development environment. The key is to first query for the existence of a second screen, then query the resolution, aspect ratio and the screen position. This will allow you to scale appropriately for the companion display.

Multiple laptop manufacturers are pursuing companion displays and we expect these devices to be available in the market beginning in 2019. Intel is looking for software partners to begin building out the ecosystem for companion display laptops.

Intel and the Intel logo are trademarks of Intel Corporation or its subsidiaries in the U.S. and/or other countries.

Microsoft and Windows are trademarks or registered trademarks of Microsoft Corporation in the United States and/or other countries.

*Other names and brands may be claimed as the property of others. © 2019 Intel Corporation