Developed by the Intel big data department, Apache Hadoop* authentication service (HAS) is a pluggable identity authentication framework based on Kerberos*. HAS supports integrating existing identity management systems of enterprises to Kerberos in the form of a plugin, so that security administrators do not need to migrate and synchronize between the existing user account system and the Kerberos database. In addition, a single HAS server instance supports multiple authentication plugins, and users can select one plugin for authentication at the client. Most components of the open source big data ecosystem can access HAS at a very low cost, and users can conveniently access various component services of the Hadoop* ecosystem by using identity information in the existing authentication system. HAS is implemented based on Apache Kerby* (an implementation version of Kerberos) and we will contribute HAS to the Apache Kerby project. According to the community plan, HAS will be released in Apache Kerby 2.0. The HAS framework has been used in Alibaba Cloud Elastic MapReduce (E-MapReduce (EMR))* and Cloud HBase*. These products implement multiple plugins based on the interface provided by HAS to enable connecting the existing identity management system to a Kerberized cluster so that user identity information can be better managed and the maintenance cost can be reduced. 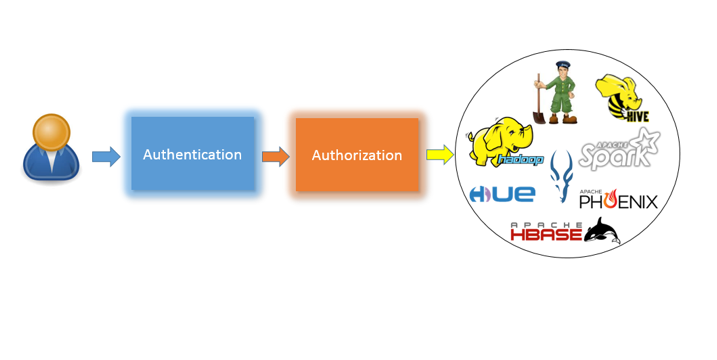 The open source big data ecosystem has many components such as Hadoop Distributed File System (HDFS)*, YARN*, and HBase. These components start related service processes, for example, NameNode and DataNode, on nodes of the cluster. If a new machine is added as DataNode to join the HDFS cluster, the DataNode can receive data. If a service is allowed to join the system without authenticating its identity, the data may be illegally obtained. If the HDFS service enables service authentication, only nodes with valid identity information can join the cluster. 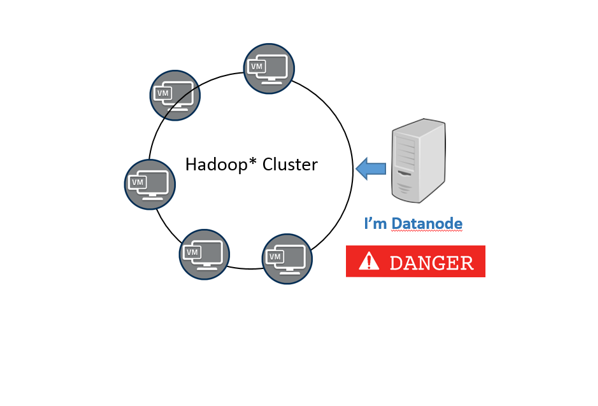 Most big data components implement permission control based on user or group. If user authentication is not used, the service just trusts the identity information provided by clients; that is, so long as a client accesses the service using a user ID, the service uses the user for permission check. Therefore, it is easy for clients to counterfeit other users; for example, a super account of the HDFS. After secure user authentication is enabled, the behavior can be prevented by verifying user identity information before granting access. 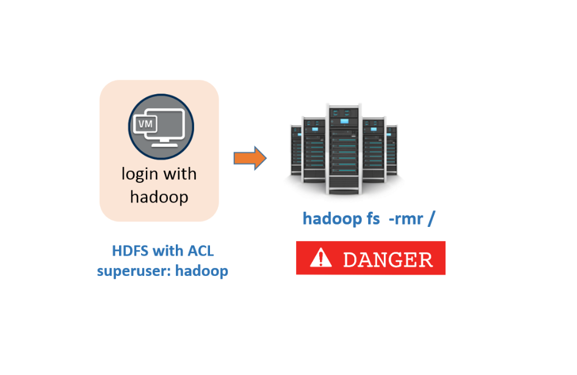 When a user needs to access a service protected by Kerberos, the Kerberos protocol process can be divided into two phases—user identity authentication and service access. 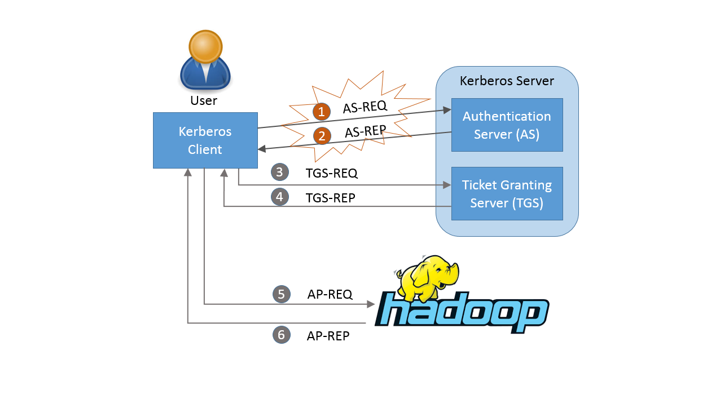 When the user needs to access a service, the user requests the ticket-granting service (TGS) from the Kerberos server based on the TGT obtained in the first phase, providing the name of the service to be accessed. TGS checks the TGT and information about the service to be accessed. After the information passes the check, TGS returns a service-granting ticket (SGT) token to the user, as shown in Step 4 in Figure 4. The user requests the component service based on the SGT and related user authentication information. The component service decrypts the SGT information in a symmetrical way and finishes user authentication. If the user passes the authentication process, the user can successfully access related resources of the service, as shown in Step 5 and Step 6 in Figure 4.

The TGT obtained in the first phase can be cached at the client (within a valid time) so long as the TGT is still valid. The user can directly use the TGT to access the service in the second phase and access multiple component services with single sign-on (SSO). The pluggable authentication mode we propose in HAS is a change to the first phase.

HAS aims to address these challenges and issues. It provides a complete authentication solution for the Hadoop open source ecosystem. HAS is implemented based on Apache Kerby, which is a Java* implementation version of Kerberos protocol. Kerberos and the use of Kerberos in the big data ecosystem have been tested for a long time, which greatly reduces the risk of HAS implementation. HAS proposes a new authentication mode. By integrating with the existing authentication and authorization system, HAS makes other authentication modes supported on Hadoop/Apache Spark* possible, except for Kerberos. In addition, this authentication mode does not require separate maintenance of the identity information. This greatly reduces complexity and risk of enterprise identity management. In addition, HAS provides a series of interfaces and tools to simplify and hide Kerberos for end users. 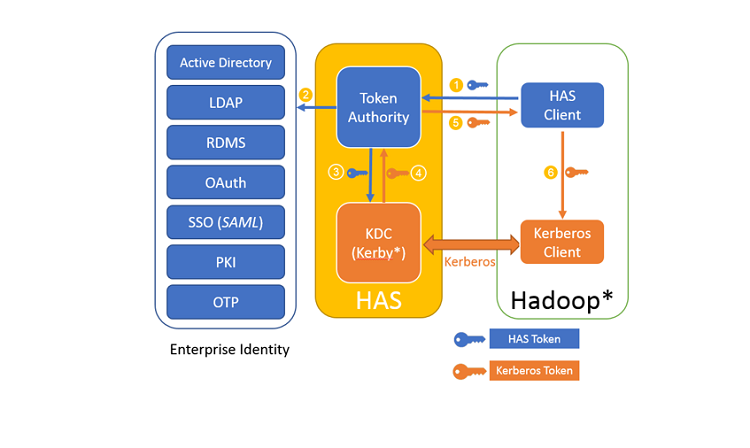 Benefiting from the basic work of Apache Kerby, HAS implements a new authentication solution for the Hadoop open source big data ecosystem at a lower cost. Apache Kerby is a sub-project of the Apache Directory* and is a Java version of Kerberos. HAS uses the efficient and high-availability key distribution center (KDC) provided by Kerby as a part of the server to issue the Kerberos ticket. The token authority part in HAS converts information of the existing authentication system (for example, OAuth2.0) into a token and exchanges the token for a Kerberos ticket in the Kerby KDC. After the Kerberos ticket is obtained, services in the Hadoop cluster can be accessed through the Kerberos protocol flow.

2.3 Key points of HAS implementation 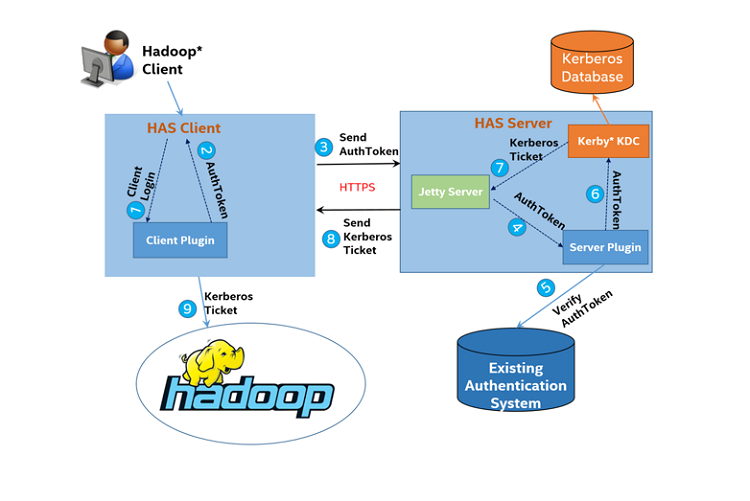 Assume that user A wants to access the HDFS and view file content in the root directory. The detailed flow is as follows after “hadoop fs –ls/” is entered in Hadoop Shell:

3. Use Scenario of HAS 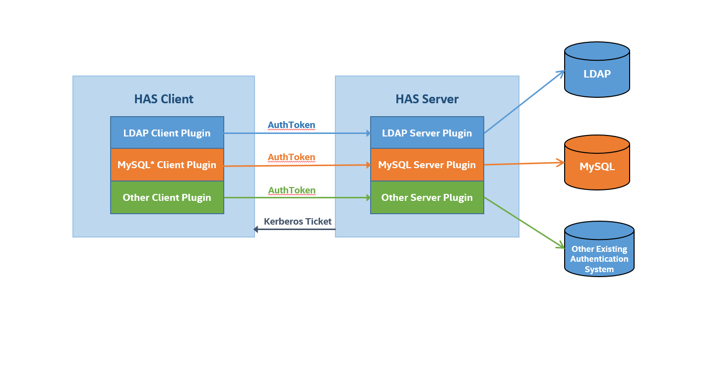 To develop their own authentication system plugins, enterprises or companies need to complete the following steps:

2. Deploy the client plugin on Hadoop client and server plugin on the HAS server.

3. Configure the plugin type to be written to interfaces in the configuration file of HAS

4. HAS Use Case Study

Alibaba Cloud E-MapReduce uses HAS framework and implements plugin authentication modes such as Resource Access Management (RAM) and Lightweight Directory Access Protocol (LDAP), that is, AccessKey of RAM, and user information of LDAP can be used to submit jobs and access the secure cluster of Kerberos.

After the RAM plugin is implemented in HAS, the EMR cluster can support Kerberos to use RAM identity information for authentication. The primary account administrator in RAM can create a sub-account on the user management page of RAM and realize access control over resources on the cloud through the sub-account. Then the administrator downloads the AccessKey of the sub-account and provides it to the corresponding developers. Later, the developers can configure the AccessKey so that users can directly use the AccessKey in the RAM sub-account to access the Kerberized Hadoop cluster. Different from the traditional MIT Kerberos mode in which principles are added on the Kerberos server in advance, identity authentication based on RAM helps enterprises better manage user identity information.

5.1 Optimization of security and performance by using Intel Platform

HAS is being improved. In the future, we will optimize HAS in terms of security and performance by using Intel platform.

First, we will use the Intel® Software Guard Extensions (Intel® SGX) technology to improve security of HAS. Intel® SGX aims to improve security of application codes and data. It allows application developers to protect sensitive information from being illegally accessed or modified by fraud software running under higher privileges. After the next-generation Intel® Xeon® Scalable processor is launched with support for Intel SGX, we will use it to store Keytabs, credentials and certificates generated and used during HAS authentication in a trusted enclave, to protect them from being attacked by malicious software.

HAS is compatible with the Kerberos protocol authentication mode, so all components in the Hadoop ecosystem can use the original Kerberos authentication mode provided by HAS. HAS extends Kerberos with more flexible identity integration. The new authentication mechanism (Kerberos-based Token Authentication) supports most components in the Hadoop ecosystem and makes little or no change to the components. HAS provides a series of interfaces and tools to help simplify deployment. It also provides interfaces to help users implement plugins to integrate Kerberos with other user identity management systems. At present, HAS supports ZooKeeper*, MySQL*, and LDAP*. HAS will be contributed to the Apache Kerby project. We will merge it in the primary JIRA. According to the community plan, the HAS function will be released in Kerby 2.0.