The Next Generation Infrastructure Core (NGIC) is an Evolved Packet Core (EPC) based on software-defined networking (SDN) and network functions virtualization (NFV), as part of a collaboration between Intel Labs and Sprint*. NGIC was released as part of the M-CORD (Mobile Central Office Re-architected as Datacenter) project to the Open Networking Foundation, and the code is available, hosted by OpenCORD.org. The code contains a reference implementation of the serving and packet gateways implemented as separate control and data planes. (Note that NGIC is not a product and will not be a product from Intel; it is a reference implementation designed to address and research software and hardware platform improvements.)

This hands-on demo guides you through setting up NGIC on your own machine and allows you to launch some sample traffic through the system to understand the packet flow in the reference implementation. Setup is quick and easy with Docker* containers and does not require a special traffic generator or similar testing equipment.

The EPC architecture defines the core cellular network architecture as defined by the 3GPP. (There are many different components of the EPC that are out of the scope of this article, but you can read more in the 3GPP TS 23.002, which provides an overview of all of the EPC network elements.)

Some of the main network elements (see Figure 1) include:

Our NGIC implementation of the EPC architecture (see Figure 2) focuses on independent control and data scaling in the SGW and PGW. The blue box indicates the current NGIC components. NGIC is implemented with the SGW and PGW as collapsed functionalities (or alternatively supported as separate nodes), implemented as the Control Plane (CP) and Data Plane (DP), and an optional SDN controller. The CP and DP are fully separate and virtualized. 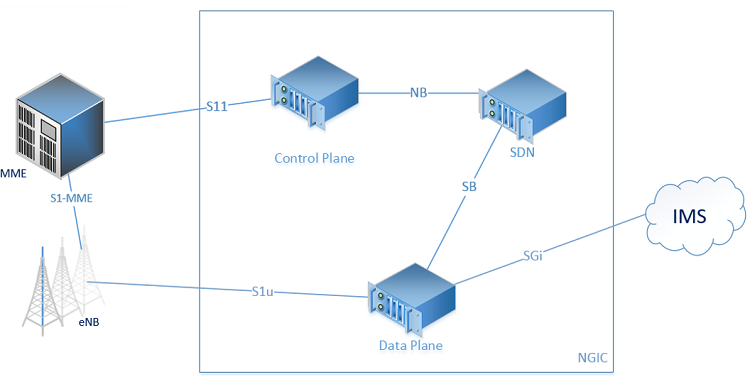 Currently, the three main components of NGIC are as follows:

Additional component implementations (MME, PCRF, and HSS) are under development and are not discussed in this article.

The DP makes use of the Data Plane Developer Kit (DPDK). Figure 3 shows the packet flow through the DP.

Packets flow through the DP as follows:

NGIC has been tested on bare metal in virtual machines and most recently in Docker containers.

However, you can also run the NGIC software on a common laptop to test it. Since the goal of this post is to show a simple working prototype, we focus on the Docker-based setup. We provide prebuilt Docker images.

This post only covers using the prebuilt Docker images.

If you want to build the NGIC Docker images from scratch, you will need at least Docker 17.06-ce; the instructions can be found here. They guide you through pulling the NGIC source code from Gerrit* and building it from scratch, which will allow you to modify, test, and contribute to the source code.

Once you have cloned the demo files in the cordbuild2017 repo as instructed above, open two additional terminals, and in all of them change directory to the demo folder:

NOTE: If you are running this demo in VirtualBox directly or indirectly, run the following command to use the VirtualBox-specific Docker images:

Use Docker-Compose to pull the images (assuming you’re not building them from scratch as noted above):

This downloads three separate Docker images shown in yellow below. 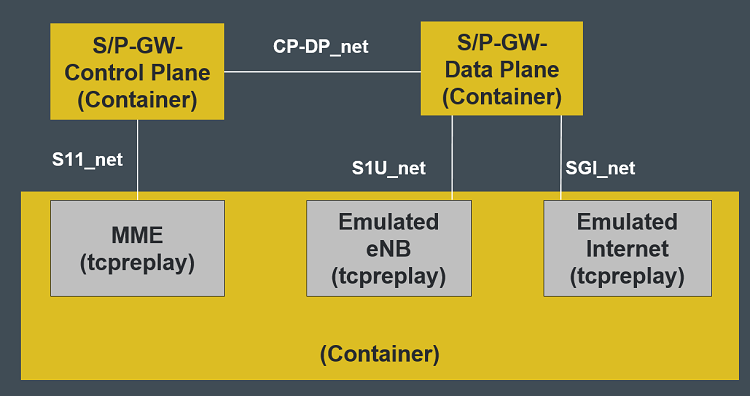 The first two images, CP and DP, are built from a specific commit (a9e0575) of the NGIC source code. The third image, traffic, is a clean Ubuntu 16.04 installation with tcpreplay installed. We will use the traffic container to emulate the non-NGIC components (MME, eNB, and IMS).

To show that the images are successfully downloaded, check docker images:

(If you are using VirtualBox, the TAG says vbox instead of latest.)

In the first terminal, start the DP using docker-compose:

Wait until you see messages about Unable to resolve ..., which means that the DP is waiting for the other containers.

In the second terminal, bring up the CP with:

Wait until you see messages about Unable to resolve mme.s11.ngic., which means that the CP is waiting for the traffic container.

Setting up the Traffic Container and Verifying Setup

In the third terminal, bring up the Traffic container in daemon mode (-d) with:

This command starts the container in the background. Now all three containers are started and should be able to see each other. Switch back to the first terminal (DP). You should see some outputs about RTE (DPDK’s Run Time Environment), and see some stats begin to print as follows:

Note that it may take approximately 15 seconds for the output to show up in the terminal after all containers have been started.

The output prints information about the packets sent and received on the S1U and SGi interfaces. You may also see a few spurious packets received, which are dropped.

Switch to the second terminal (CP).

You should see a table with lots of packet counter stats, which are all 0 for now since we haven’t started any CP traffic. The CP waits for packets from the MME to install rules and set up flows on the DP.

In the third terminal, enter the Traffic container with:

This gives you a Bash shell in the Traffic container.

For this demo, we included three pcap files in the Traffic container: traffic creating the sessions, the uplink traffic, and the downlink traffic. We need to update this prerecorded traffic to have the correct IP addresses based on resolving the names of the running containers. We included a Python* script that uses scapy to modify the necessary address fields. Generate three modified pcap files (this takes several seconds.):

Next, we have to figure out where Docker mapped each of the three network interfaces inside the container. If you look at the diagram (Figure 2: NGIC Dockerized Demo Setup) above, you’ll see that the Traffic container uses three different networks: S11, SGi, and S1U. Currently, Docker brings up multiple interfaces in random order, so we must run a command to determine which interface maps to which network.

Paste the following into the Traffic container:

You can test and make sure it worked with:

This demo uses tcpreplay to replay prerecorded GTPv2 traffic into the CP and DP. Before we can send or receive traffic, first we need to install some rules using the CP. Play the S11 (control plane) traffic to set up the flows:

Switch back to the second (CP) terminal. You should see that 1000 CreateSession and 1000 ModifyBearer packets were received for a total of 2000 received and 2000 sent packets:

The output of the DP shows the various stages of the packets in the data pipeline that are outlined in Figure 3.

From the Traffic terminal, type:

Notes about this Demo

The sample demo above shows the overall setup and packet flow in NGIC, but it takes a real traffic generator, such as ng4t and Spirent and Ixia, to really test the performance and throughput.

This article provided an overview of NGIC and a hands-on demo for how to test containerized versions of the CP and DP using replayed traffic. Key takeaways include:

Karla Saur is a Research Scientist at Intel Labs working on scalability in the EPC. Before coming to Intel, Karla finished her PhD in computer science at the University of Maryland. She is broadly interested in scalability and availability in distributed systems.

This article is based on a demo given at CORD Build 2017 along with Saikrishna Edupuganti and Jacob Cooper.