In this tutorial you will use an Intel® SoC FPGA to see how Field Programmable Gate Arrays (FPGAs) can be used to accelerate a complex mathematical function, boosting system performance and off-loading the CPU from a computationally intensive algorithm.

This design uses a Cyclone® V SoC FPGA to demonstrate a mathematical function that creates fractal images, known as the "Mandelbrot Set". The algorithm runs on the dual-core Arm Cortex*-A9 processor, and on a hardware accelerator inside the FPGA letting you see the difference in performance, and CPU load. As part of the tutorial, you will experiment with various hardware and software optimizations to see how they affect system performance. 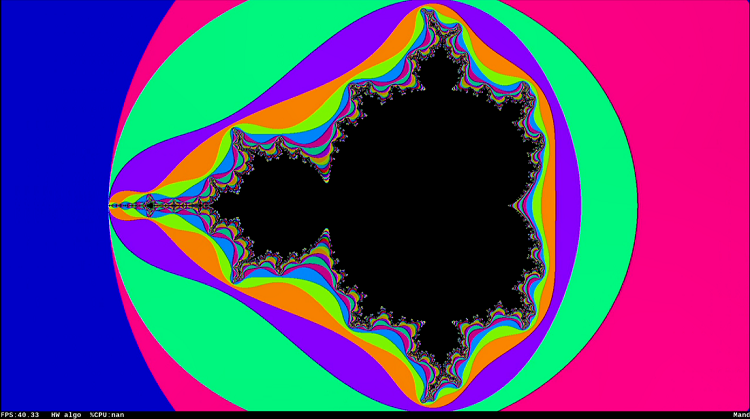 What is the Mandelbrot set and how is it computed?

This example is based on the Mandelbrot fractal, which is computed in the complex number plane. The Mandelbrot algorithm can be used to draw a color picture representing the points within the set as black, while those lying outside the set are assigned a color based on the number of iterations passed through the algorithm before they fall out of the set.

The algorithm is simply a continuous iteration of the following equation, where Z and C represent complex numbers. The initial value of Z0 is 0, and C represents the point on the complex plain that is being analyzed. 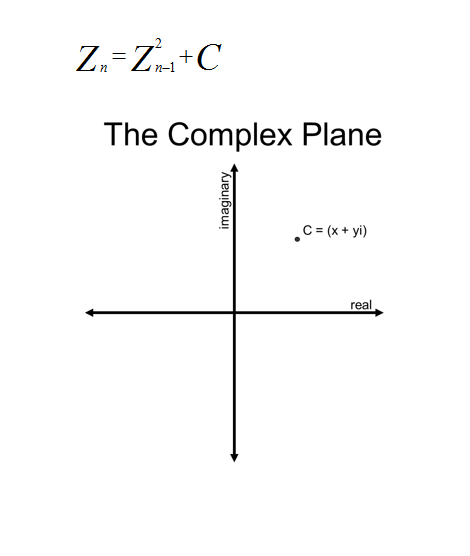 The iteration of the Mandelbrot equation goes like this: 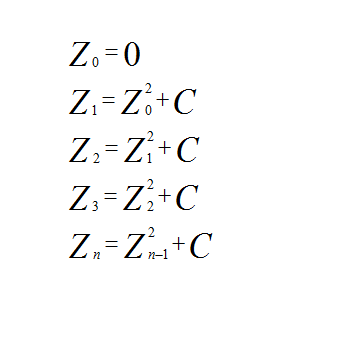 The Mandelbrot equation can be minimized as follows, if we assume the complex numbers Z and C can be represented as follows: 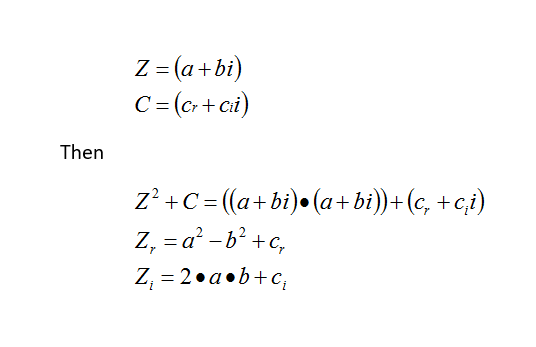 Once we have the new Zn, we need to calculate its distance from C.

If the current Zn is:

Which is equal to the previous Zn-1:

So, the distance is simply:

Or a distance greater than 2 would be: 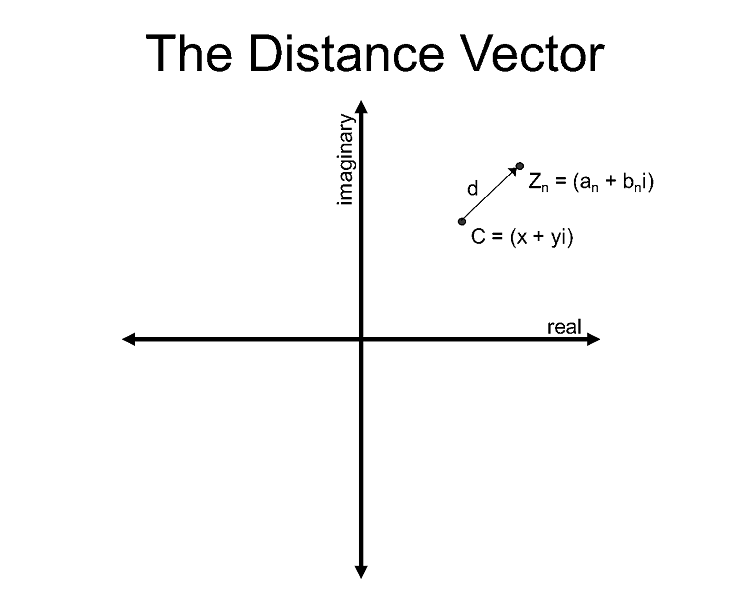 These minimizations of the Mandelbrot and distance computations result in three equations required to compute each iteration: 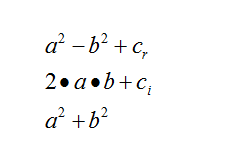 Here is an example of C code that performs this function. You can access the source code used by the processor in the Code Samples section.

To check the version of your Terasic DE10-Nano microSD Card, do the following:

How do I know if my microSD Card contains the Mandelbrot design?

To check the version of your Terasic DE10-Nano microSD Card, do the following:

1. Use the micro-b USB cable to connect the board (USB OTG port) and your host system (Type-A end of the cable connects into a standard USB port on your computer).

2. If you've unplugged the power cable, plug it back into the board. Wait for the board to boot.

4. You've now arrived at the webpage hosted by the Terasic DE10-Nano board. Navigate to the Resources tab, select Design Files, and click Get the Version of This SD Card button. 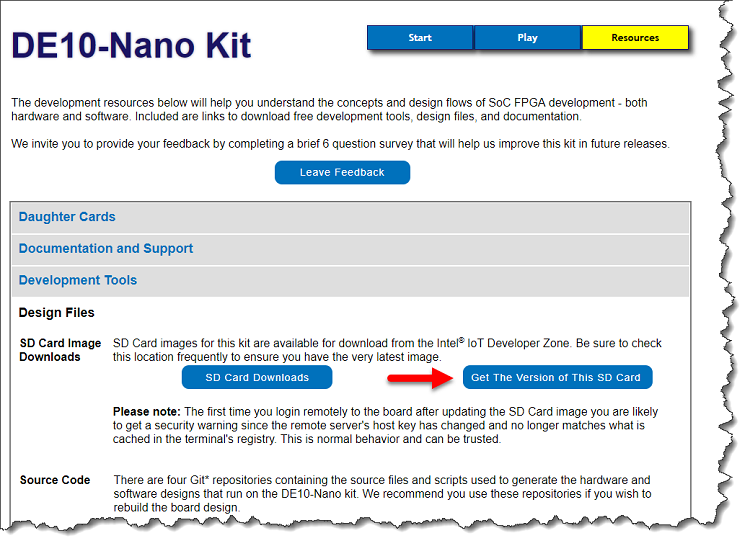 5. Your web browser will display a text string that looks something like this:

6. The last part of the string, highlighted above, contains the date the SD Card image was built. In this example it reports a build date of March 22, 2017. The Mandelbrot design is included in all versions built in 2018 and later.

Where Do I Get the Mandelbrot Design?

Board Connections and Setup

1. Make sure the microSD Card is inserted in the board.

2. Connect the Terasic DE10-Nano board HDMI output to the monitor using an HDMI cable. 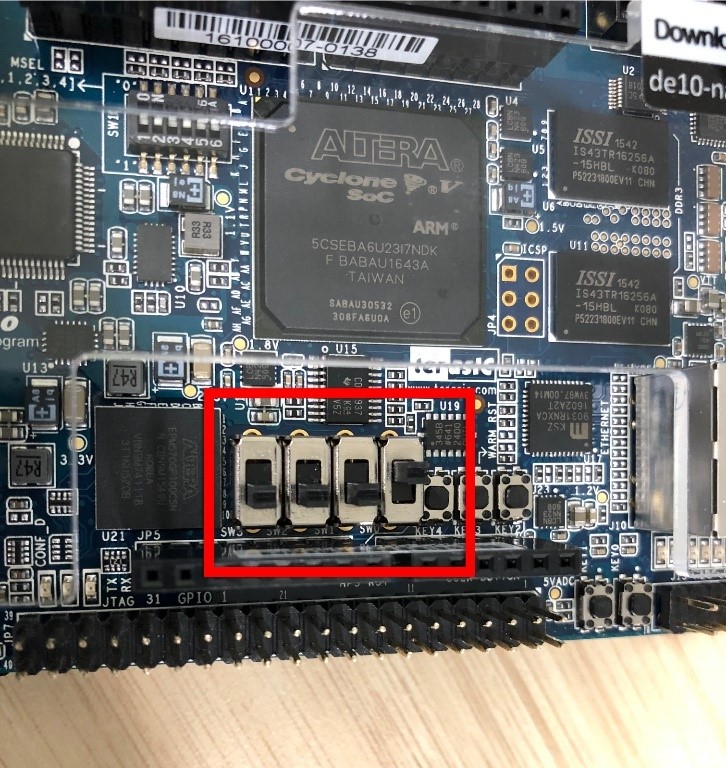 4. Apply power to the HDMI monitor.

5. Apply power to the Terasic DE10-Nano board by connecting the power adapter and plugging the power cable (DC 5V) into a wall outlet.

After the board boots, it will begin displaying fractal images on the monitor. The application chooses various points within the image, zooms in to reveal more detail, zooms out, picks a new point, then repeats. By default, the board uses the Mandelbrot Engine in the FPGA fabric to generate the fractal images. Image data generated by the Mandelbrot Engine is written to a buffer in the external SDRAM, then read by the video pipeline and sent to the HDMI interface. 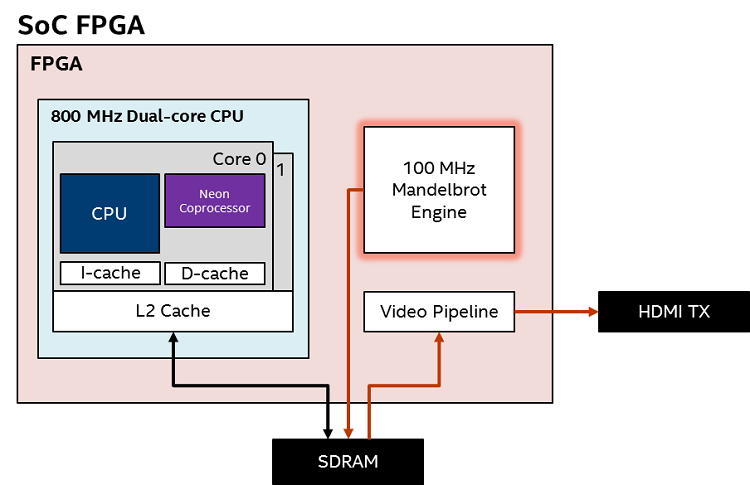 1. Notice the information displayed at the bottom left corner of the screen:

2. Notice the scrolling text in the bottom right corner of the display:

The fractal images are now being generated by the dual-core Arm Cortex-A9 CPU. Image data generated by the CPU is written to the buffer in the external SDRAM, then read by the video pipeline and sent to the HDMI interface. 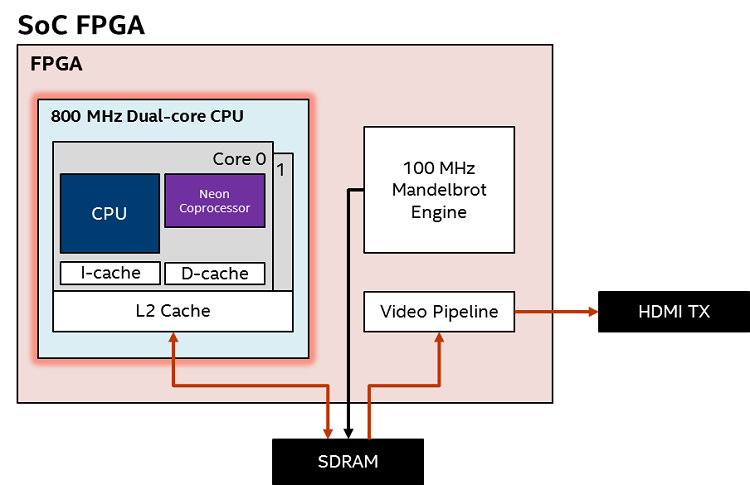 4. Note the performance (FPS) and CPU usage (%CPU) displayed in the bottom left corner of the display.

5. Toggle between FPGA and CPU operation by pressing KEY1.

Notice how the display is updated faster (more FPS), and with a low %CPU utilization (~ 4% to 6%) in FPGA operation.

Notice how much slower the display is updated when using the CPU. Also notice that the %CPU utilization is 99% or greater, fulling consuming the CPU processing resources. This illustrated two key virtues of using FPGAs for complex algorithms:

Software running on the processor lets you modify how the system operates. You can open the Main Menu from which you can access several sub-menus to change settings. Here are the sub-menus available:

1. Bring up the "Main Menu" by pressing the push button labeled "KEY0" on your Terasic DE10-Nano Development Kit. 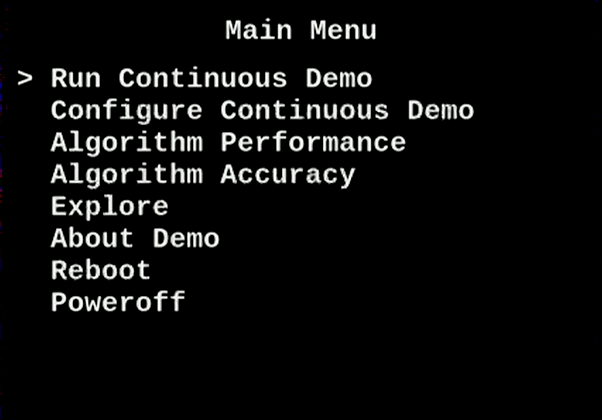 2. Scroll to the About Demo choice by pressing KEY1 on your Terasic DE10-Nano Development Kit.

3. Select this option by pressing KEY0.

4. Read details about the design, advancing through the text display by pressing either key. Contained within the text are the compiler version, options, and libraries used to create the software, as well as the Intel® Quartus® Prime Software version used to generate the FPGA hardware design.

5. When you return to the Main Menu, press KEY0 to Run Continuous Demo.

Now that you know how to navigate the menus, let’s explore the rest of this application.

We saw how much faster the FPGA generated images than the CPU, but let’s measure the actual time it takes. Here’s how: 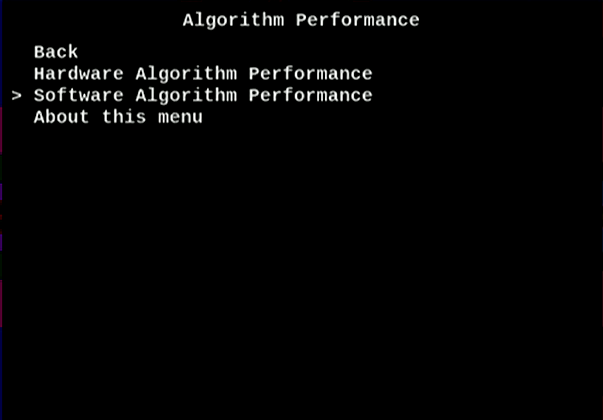 4. Select Multithreaded Cortex A9 NEON FP VI. This is the highest performance configuration for the CPU. 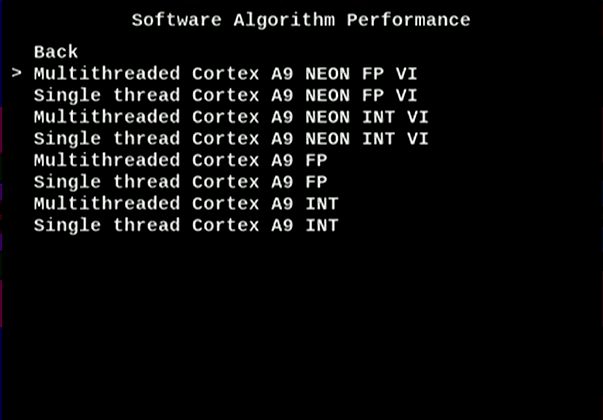 Software running on the dual-core Arm Cortex-A9 processor in the Cyclone V SoC FPGA device can be configured to operate in one of eight modes using any combination of the following choices:

The algorithm is run by the dual-core CPU (plus NEON* coprocessor) generating an image in just under 220ms. Your results may vary slightly. 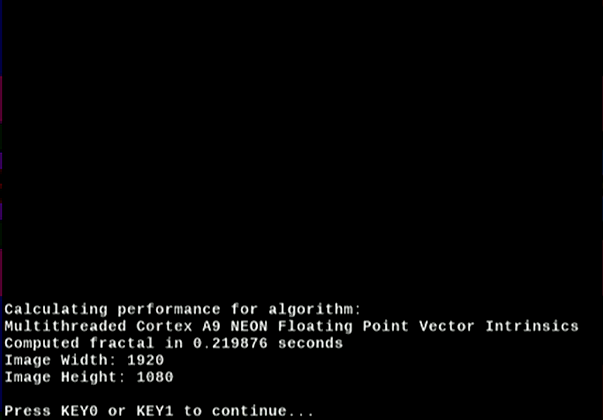 5. Press KEY0 or KEY1 to continue, then select Back. 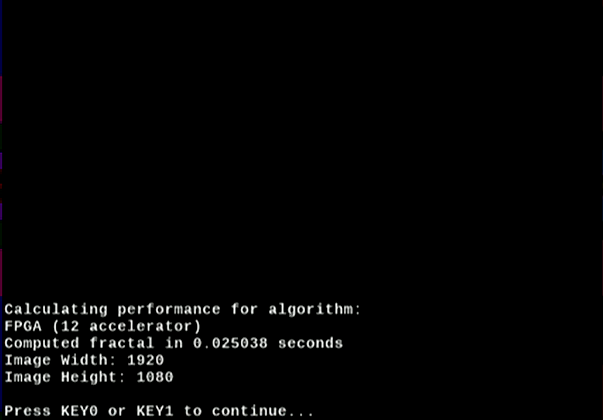 The algorithm is run in the FPGA using 12 accelerators, generating the image in just over 25ms. This is over 8 times faster than the CPU.

6. Experiment with other operating settings and see how fast they are.

7. Return to the continuous demo.

This menu lets you select the number of accelerator cores used by the Mandelbrot engine in the FPGA. You can choose from 1 to 12 accelerators to work in parallel. By default, the system uses all 12 cores. 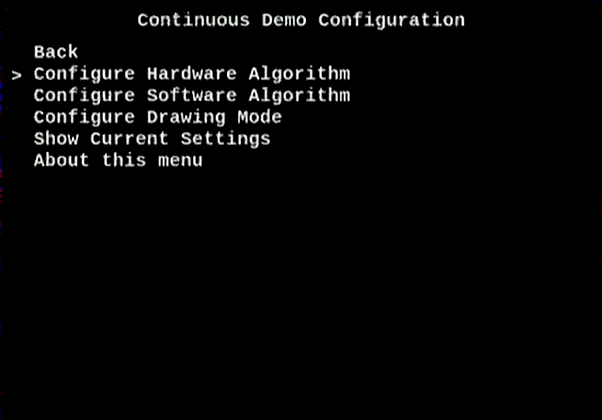 How Does the Mandelbrot Engine Work?

A frame generator feeds image vectors into a Mandelbrot subsystem. The vectors are converted to coordinates which are fed to the Mandelbrot engine. The output is them colored based on how close the coordinate is to being within the Mandelbrot set, and a DMA transfers the pixel data to the image buffer in external SDRAM.

The subsystem above produces images very quickly, but to get even more performance, multiple sub-systems are combined and operate in parallel to achieve even higher performance. 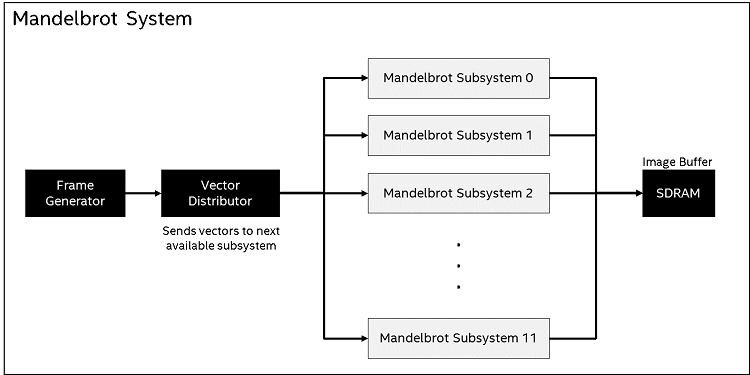 A Vector Distributor is used to send vectors to the next available subsystem, making sure that all are continually processing vectors, and writing pixel data to the image buffer in SDRAM.

From the menu system provided in this design, you can choose how many Mandelbrot subsystems (acceleration cores) are used.

5. Select Back, then choose Run Continuous Demo and watch the speed of the images being drawn.

6. Toggle between HW algo and SW algo by pressing KEY1, and notice the performance difference. FPGA operation is a little slower than the CPU when only 1 accelerator is used, but CPU operation still requires 100% of the CPU bandwidth.

7. Experiment with the number of accelerators to see where the FPGA and CPU run at about the same speed.

8. When you are done, configure the hardware algorithm to use 12 accelerators.

By default, software operation (SW algo) is configured to run on the dual-core Arm Cortex-A9 processor using the fastest configuration:

Let’s experiment with some of the other settings. 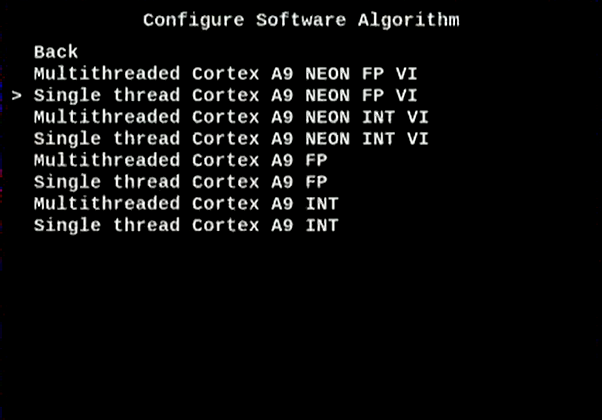 5. Select Back, then Run Continuous Demo.

7. Notice the performance metrics. Frames per second (FPS) are reduced significantly, but the %CPU usage is reduced as well (~ 55%).

You can choose other configuration options to see how they impact the performance (FPS and %CPU utilization). Some other interesting choices to try are:

Note: You can see which operating mode is being used by watching the scrolling text in the lower right corner of the display.

8. When you are done experimenting, configure the Software Algorithm to use Multithreaded Cortex A9 NEON FP VI and put it back in Run Continuous Demo mode.

How Does the Frame Buffer Work?

Once image data has been written to the SDRAM, the video pipeline reads the data out using an internal DMA, and sends it to the HDMI interface chip using the proper clocking.

Image data stored in SDRAM can be organized in one of two ways:

1. Direct (or "live buffer") – As data is written into the image buffer, data is also being read out of the buffer and send to the display. If the image data is being generated slowly enough you can see the image being updated line by line.

Software controls which buffer is being written to, and read from. In this mode, the monitor is updated with a complete image every time. 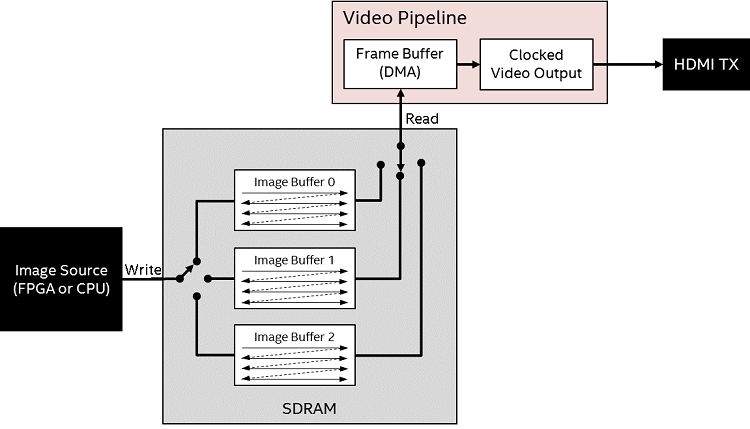 The "Explore" mode lets you choose a part of the image to view in more detail. In this mode a cursor appears that you position using the on-board accelerometer, tipping the board from side to side or front to back to move it. 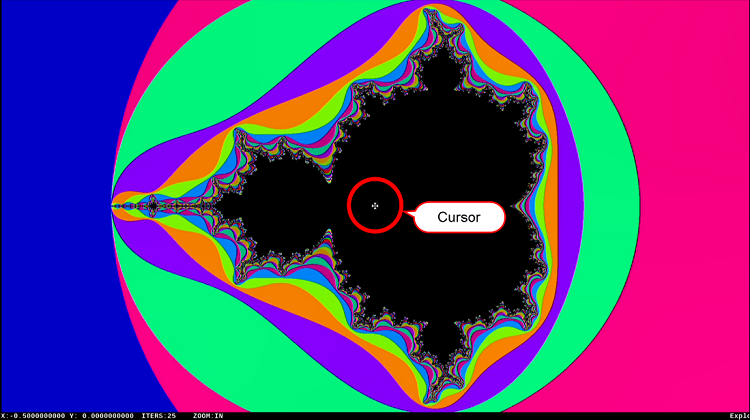 5. Tilt the board to move the cursor to any place on the display where you wish to see more detail (i.e. zoom in).

6. Put the board back to level then press KEY1 to zoom in. At some point you will notice that you aren’t getting much more detail. That is because the number of iterations is set too low.

11. Continue to zoom in by pressing KEY1. You will now see much more detail when you zoom in.

12. When you are done exploring, press KEY0 to re-open the Explore Menu.

The Algorithm Accuracy menu lets you compare the mathematical accuracy between the various operating modes: 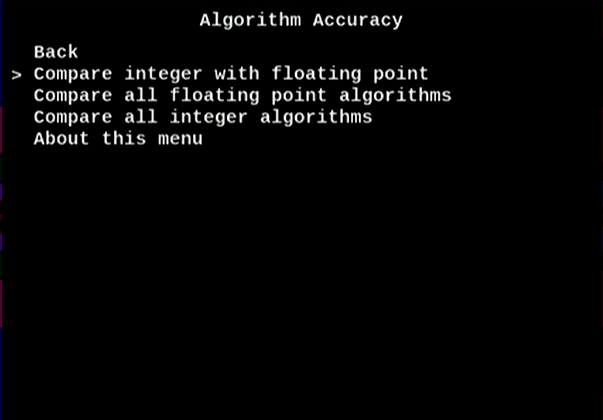 The results are calculated and displayed as shown below. In this test, we expect to see differences in the results due to the different precision characteristics of floating-point and integer arithmetic. 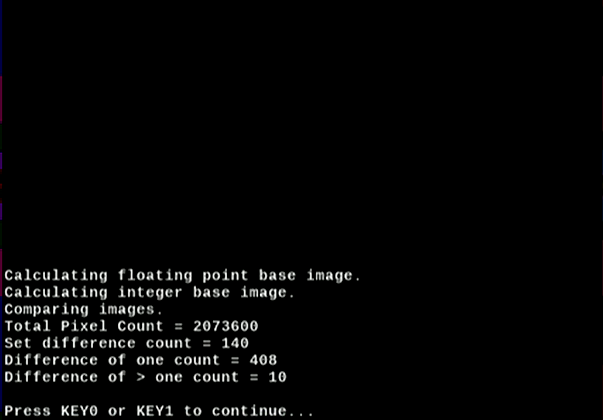 4. Press either KEY0 or KEY1 to continue.

5. Try one of the other choices (i.e. all floating-point, or all integer).

6. Return to the continuous demo.

When you’re done playing with the DE10-Nano board we recommend you shut it off as follows:

You can always just pull the power plug, but since the system is running Linux*, shutting it down improperly may leave remnants on the SDCard.