We are fast approaching a data-driven world, with the sensors in internet of things (IoT) devices, mobile devices, and cameras generating a multitude of data. International Data Corporation (IDC) reported that the global datasphere will grow to 163 zettabytes (ZB) by 2025, which is 10 times the 16 ZB data generated in 2016. The variety and velocity of data growth complicate this trend, continually changing the way data is collected, stored, processed and analyzed. New analytics solutions from machine learning, deep learning, artificial intelligence (AI), new architectures, and new tools are being developed to extract and deliver value from this huge datasphere. IDC predicted that the amount of analyzed data will grow by a factor of 100 to 1.4 ZB1 by 2025.

Widely used in big data analytics, Apache Hadoop*2 is a highly scalable system that allows distributed processing of large sets of data across computer clusters, scaling from a single server to thousands of nodes. Hadoop offers local computation and storage, storing data in the native Hadoop Distributed File Systems (HDFS) on hard drives that are locally attached to the Hadoop nodes. This architecture binds compute and storage to a physical node and thus is hard to scale independently.

Computation and storage requirements often grow at different rates; more often, storage is growing at an unprecedented rate without a similar growth in computation needs. This creates a discontinuity in big data infrastructure. Traditional approaches including building a single large cluster or multiple small clusters cannot resolve this problem as they lack isolation and elasticity, and costs increase significantly due to duplicated storage.

Alibaba Cloud* Object Storage Service (OSS) is a cloud object storage service provided by Alibaba, also known as Aliyun. It is an easy-to-use service that enables you to store, back up, and archive large amounts of data on the cloud. OSS acts as an encrypted central repository from where files can be securely accessed from around the globe. OSS guarantees up to 99.95% availability and is a perfect fit for global teams and international project management5. Starting with Hadoop 3.0, OSS is officially supported by the Hadoop community upstream through the close collaboration between Intel and Alibaba. Users can connect seamlessly to the OSS file system while using Hadoop, and offline, interactive, data warehousing, deep learning, and other applications in Hadoop can read and write OSS object storage without any code changes. This significantly simplifies big data processing on OSS and provides easy, fast, scalable, and cost-effective analytics solutions for end users.

This paper presents big data analytics on cloud architecture, introducing Hadoop on OSS disaggregated storage solution tunings, optimization, and results. We will first introduce challenges and motivations, followed by the Hadoop Compatible File System (HCFS) architecture, and Alibaba OSS. Then we will detail the optimizations of OSS object file upload and download actions which significantly increase performance. We will present some performance and cost comparison results obtained by Alibaba for sorting workloads on Hadoop with HDFS and OSS to demonstrate how OSS can reduce the total cost of ownership (TCO) for big data analytics workloads on Intel® platforms.

The storage and compute resources in Hadoop are bound together, as the data in HDFS is stored on hard drives that are locally attached to the Hadoop nodes. This architecture makes it hard to scale compute and storage separately. Several traditional approaches try to resolve this issue:

Big Data Analytics on the Cloud

It can be expensive to move data into or pull data from the public cloud. In response, many organizations tend to run big data analytics workloads directly on the cloud, where they build a shared “data lake” pouring raw, unfiltered, unprocessed data into a storage pool that can be shared by multiple applications and used in different scenarios. Meanwhile, big data analytics on the cloud offers all the same benefits associated with other public cloud services, including agility, flexibility, ability to access data from everywhere, easy provisioning and management, and cost benefits. Thus, big data on the cloud is becoming increasingly popular.

Though Apache Hadoop is built on HDFS, it also works with other file systems, such as platform-specific local file systems, object stores such as Amazon* Simple Storage Service (Amazon S3) and Azure* Storage, as well as alternative distributed file systems. Hadoop Compatible File System (HCFS)5 provides the ability to run big data analytics on other storage systems. Since Hadoop 3.0, OSS is officially supported by the Hadoop community upstream through the close collaboration between Intel and Alibaba*, along with Amazon* S3, Microsoft Azure*, Data Lake, and Google* Cloud Platform. This makes OSS another good choice for Hadoop users, especially for users in China.

Alibaba Cloud Object Storage Service (OSS) features massive capacity, security, low cost, and high reliability. OSS provides storage services through a RESTFUL web service interface. In practice, users can upload and download data on any application anytime and anywhere by calling APIs or perform simple management of data through the Web Management Console. OSS can store any type of files, with no maximum total storage limitation (individual objects can be as large as 48.8 TB). Therefore, it applies to various scenarios, including big data analytics workloads, machine learning, enterprise applications, and more. Figure 1 shows the OSS ecosystem, which is widely used in Alibaba Cloud.

By following the official Hadoop guide for the hadoop-aliyun module, you can implement a new Hadoop OSS File System class which supports access to OSS in Hadoop through the org.apache.hadoop.fs.FileSystem interface. We implemented this class, then conducted a quick performance evaluation on Alibaba Cloud. We identified several performance bottlenecks, including object file upload, object file read, and renaming a directory which has thousands of files under it. Alibaba and Intel engineers collaborated and worked out several optimization proposals. With these optimizations, Hadoop on OSS performance is remarkably improved. Figure 2 shows the optimizations for the Hadoop OSS file system. Detailed Hadoop Jira* are listed as follow: 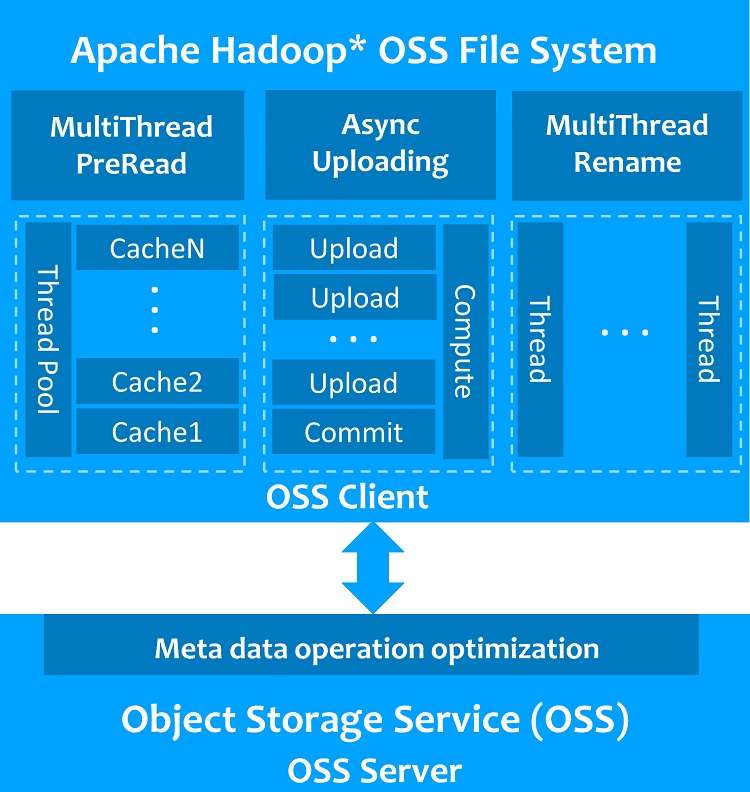 When planning a big data analytics workload on the cloud, people always want to know how to choose between HDFS and object storage for persistent data storage. Generally, the opinion is Hadoop on HDFS will have better performance since HDFS has better throughput and lower latency compared with OSS, while Hadoop on OSS will be much more economical from a cost point of view. After completing the major Hadoop OSS performance optimizations mentioned above, we conducted a TPC-DS* (Apache Hive* testbench) test with selected 64 queries on both HDFS (Alibaba Ultra Cloud Disk) and OSS on Intel platforms to see if the general opinion still stands. Figures 3-5 show detailed performance and cost comparison results. 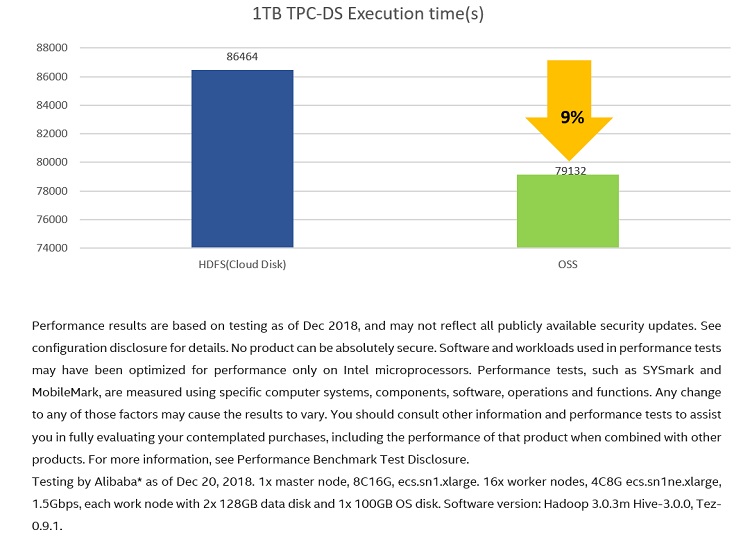 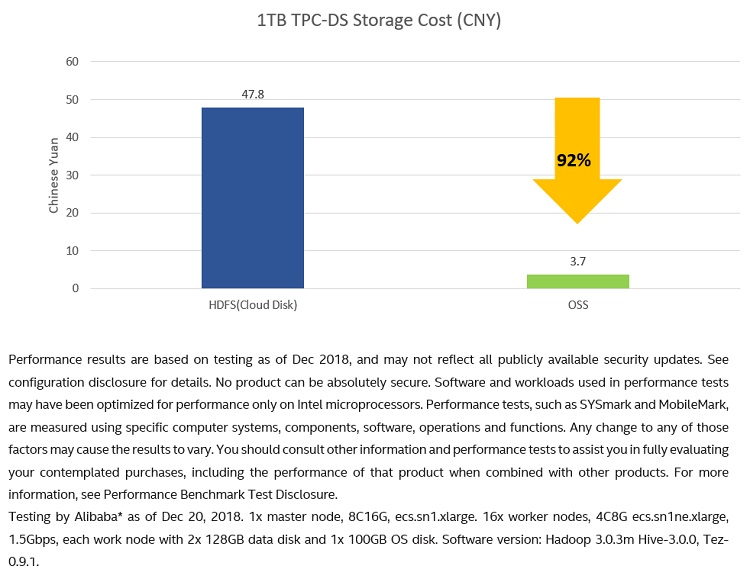 Here’s how the cost shown in Figure 4 was calculated: 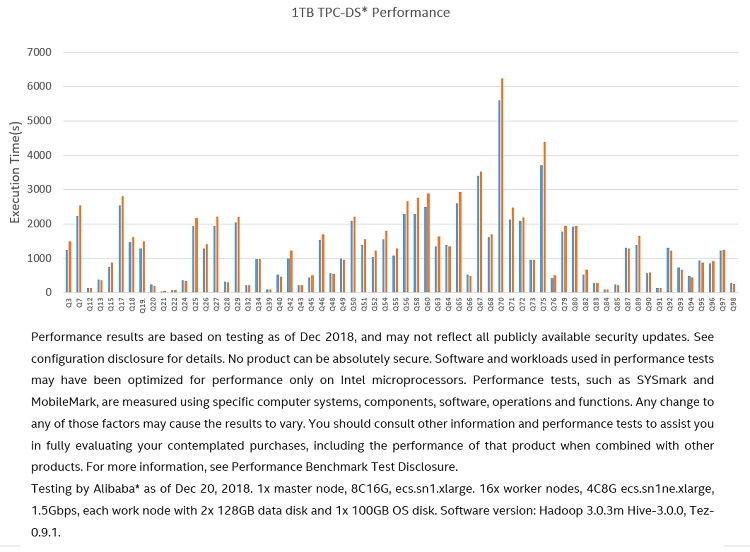 Although the Hadoop OSS File System released in Hadoop 3.0 has good performance in most read and write cases, there are still a lot of optimization opportunities, such as improvement of the random read performance for columnar format files. Alibaba and Intel will continue to work to deliver a high performance, cost-efficient Hadoop on OSS solution for the Intel platform for Alibaba users. This work proves that migrating your big data workloads to the OSS cloud not only reduces the cost significantly but also provides improved performance through tunings and optimizations.