Visual effects and animation production are a perfect storm of creativity and technology. The final results are usually amazing but hide months of hard work by talented and very smart people. With its highly efficient, collaborative approach, Foundry’s Katana gives artists the creative scope and scalability to meet the needs of the most demanding look development and lighting projects. But, as the pace of content production increases, studios are under even greater pressure to deliver more complex work, fast and with ever-shrinking budgets.

Over the past three years, Foundry has reduced the time to first pixel several fold through identifying and optimizing code throughout Katana that would block scalable performance. Most recently, Foundry worked closely with Intel to optimize the performance of its latest Katana 3.5 by switching from single- to multi- threaded processing using Intel technologies.

Compared with Katana 3.2v2, tests with Katana 3.5 show a performance increase of up to 30x running a stress test with some key components. This has dramatic and far-reaching benefits. In a single day, artists are now able to make many more iterations to refine a project, freeing them to be more creative. Studios can meet customer expectations for increasingly complex scenes, while protecting their investment in Intel® hardware. 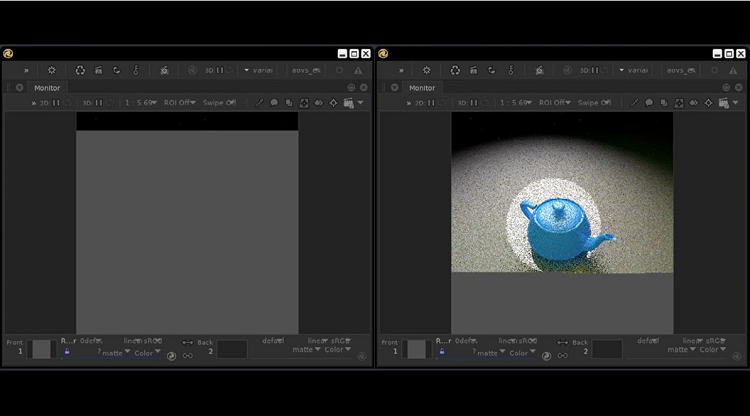 Figure 1. Over the past three years, Foundry has reduced the time to first pixel several fold. This image shows two renders starting at the same time, moving much faster after a Foundry/ Intel Dungeon collaboration

Foundry has been developing creative software for the digital design, media and entertainment industries for over 20 years. Its products are used to create breath-taking visual effects sequences on a wide range of feature films, video on-demand, television and commercials - see image 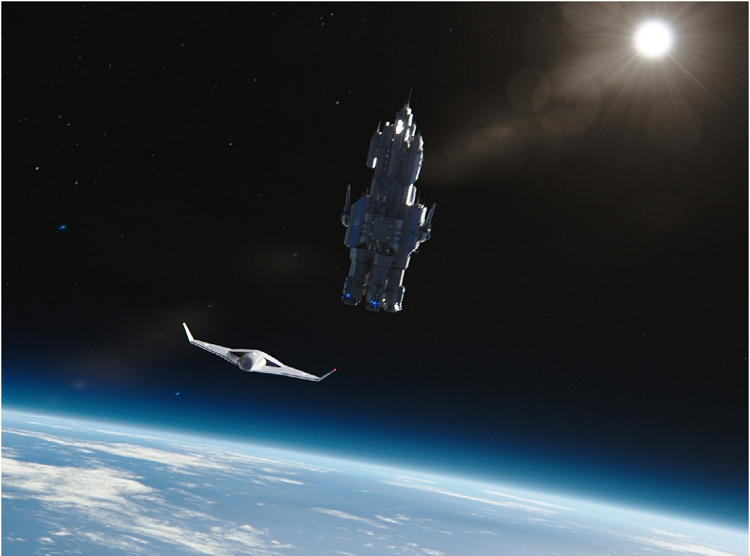 Figure 2. Katana was used extensively by Toronto-based studio SPIN VFX in the making of The Expanse, streaming on Prime Video. Image courtesy of SPIN VFX

Foundry’s look development and lighting software Katana has been at the forefront of innovative entertainment production for eight years. Katana already solves key pain points, letting artists open files with massive data sets in seconds rather than minutes or hours. Artists can work across similar shots grouped into one file and make changes to everything at the same time and teams can share work through efficient collaborative methods. That said, over eight years, the demands on artists to produce pathologically complex scenes, with shorter schedules and tighter budgets has increased. Katana needed to change with the times.

The key opportunity was to improve how quickly Katana calculates the 3D scene to hand over to a renderer plugin which creates the final image. Thus, making artists more efficient, even when working on the most complex scenes of the most complex projects.

Together with Intel engineers, Foundry embarked on a project to optimize the performance of Katana 3.5 using the Intel® VTune™ Profiler and Intel® Threading Building Blocks (Intel® TBB).

However, as it’s not always easy to figure out what to do to break bottlenecks found in the Intel VTune Amplifier, Foundry and Intel engineers met regularly to find suitable solutions. Having knowledge of the codebase and Intel hardware tools at the same time made it possible for the team to make continuous progress.

Using Intel TBB, Foundry’s software developers were able to optimize the performance of Katana 3.5 to run on multiple cores.

Here the flexibility of the Intel TBB tasks allowed Foundry to map a very diverse range of operations to multiple cores efficiently using the built-in task stealing mechanism. This was possible even in the case of nested parallelism that could have lowered the efficiency with regular threads or other parallel programming frameworks.

Foundry compared the scene traversal time for each Katana 3.5 development version against Katana 3.2v2 running on a dual-socket Intel® Xeon® processor E5-2667 v4-based workstation with a total of 16 physical cores (32 threads) and 64 GB RAM on a daily basis¹.

Foundry benchmarked the performance of OpScript – a toolset used by artists to write custom tools to extend the functionality of Katana. They found that the Katana 3.5 dev version completed scene traversal in just 11.15 seconds compared to 335.9 seconds with the previous Katana version 3.2v2. This translated into a massive 30x performance improvement – see figure 1. 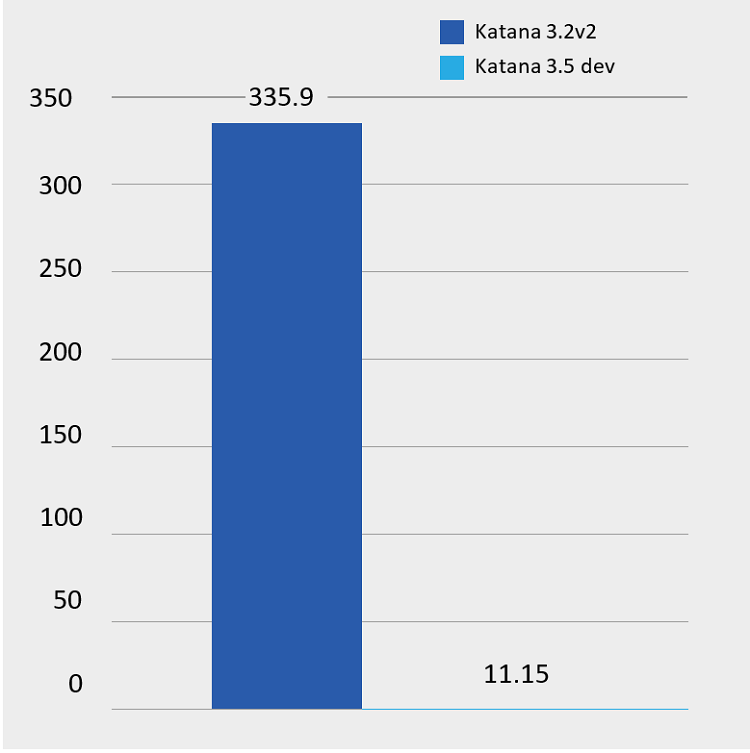 Figure 3. Time in seconds for scene traversal in an OpScript stress tests in Katana 3.5 dev versus Katana 3.2v2

Finally, Foundry ran the same OpScript stress test together with the 3Delight renderer to ascertain what impact this additional software would have on performance. It found that Katana 3.5 dev completed scene traversal in 11.76 seconds versus 293.43 for Katana 3.2v2, equating to a performance gain of 24.95x – see figure 2. 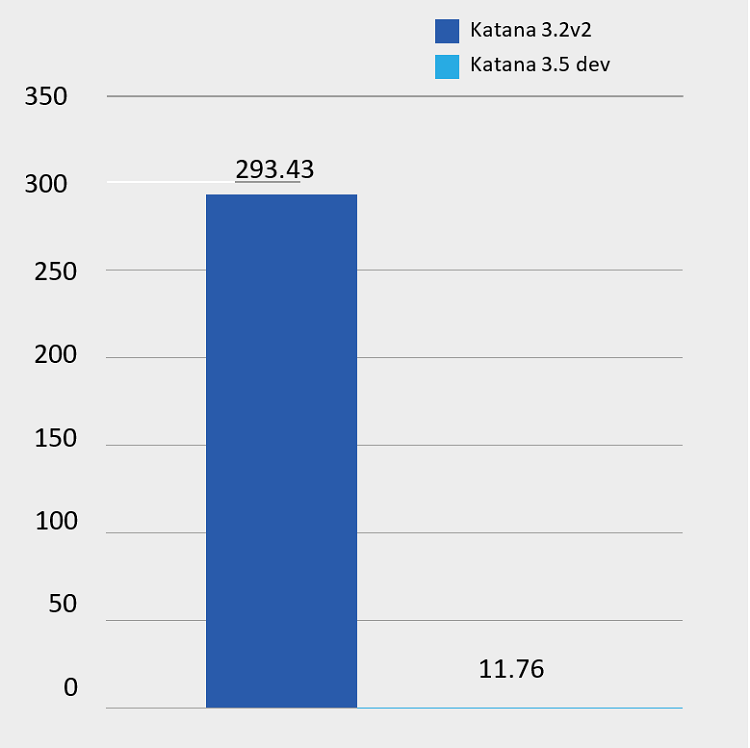 Commenting on the results Jordan Thistlewood, Director of Product – Preproduction, Look Development and Lighting at Foundry, said: “The real-world impact for artists and studios using Katana is fundamental. The number of iterations an artist can make to refine a project in a day has just increased dramatically. The more the artist can iterate and refine, the better the results they can create. In a challenging creative industry like visual effects and animation, this is everything.”

With in-depth training to develop our understanding of the latest Intel hardware and how to best utilize it, combined with regular technical discussions to advise on the best use of Intel® libraries, such as Intel TBB. We were able to build a solution that scales horizontally allowing our customers to better utilize their hardware resources to meet production demands.”

“Working with Intel’s engineers during the development of Katana 3.5 has been invaluable.”
— Daniel Hutchinson, Lead Engineer - Katana Performance Team at Foundry

With the help from Intel VTune Amplifier, Foundry was able to identify and clear performance bottlenecks in the latest version of its Katana software and take advantage of multiple cores using Intel TBB. With this latest round of optimizations Foundry has slashed severely scene traversal times with some operations up to 30x on a 32-thread machine.

Ultimately these performance gains allow studios and production houses to get work done faster. They can then choose to apply these time savings however they see fit whether that’s by using the same number of artists to produce higher quality work or by using smaller teams to produce the work of an equal quality. By using smaller teams for each project, studios are able to deploy artists to work on a larger number of concurrent projects, increasing revenue potential.

Jordan Thistlewood concluded: “For a company that deploys Katana this is like an insurance policy protecting them from the risks inherent in managing clients and their expectations.

“Katana has always been the tool that could help make the impossible possible and now it is ready for the challenges of the future, protecting clients’ investment in Intel hardware, and freeing filmmakers to be even more creative.”
— Jordan Thistlewood Director of Product – Preproduction, Look Development and Lighting at Foundry