Android* apps are part of our daily lives and continue to gain popularity on Chromebook* notebook computers. In response, Intel and Google are working to make the apps safer and better. In 2021, the number of people using Android apps on Chromebooks increased by 50%,1 with use cases in conferencing, games, and content creation. In 2022, 12th generation Intel® Core™ Processors are ushering in the transition from a containerized Android Runtime for Chrome (ARC++) architecture to an architecture called Android Runtime for Chrome Virtual Machine (ARCVM). ARCVM delivers better Android 11 support, easier upgradability, and better security and scalability.

The following graphic depicts the architecture of the system: 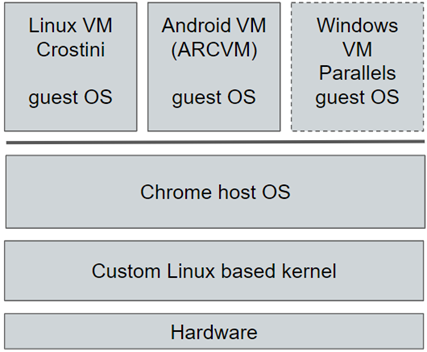 ARCVM uses Virtio, an architecture in which a guest Android OS forwards API requests to a virtual machine monitor (VMM) on Chrome OS (or CROSVM) based on a Kernel-based Virtual machine (KVM) hypervisor. The hypervisor manages access to hardware devices such as GPUs, input, and so forth. Since the guest operating system runs in a virtual machine, the host Chrome OS is protected from the possibility that the guest contains malicious code. It also provides stricter isolation for the Android environment. ARCVM allows users to install Android apps and use developer tools without requiring the device to be in developer mode.

The 12th generation Intel Core processor has a hybrid core architecture with two Performance-cores and eight Efficient-cores that are optimized to run Android applications. In addition, it has unique hardware blocks that accelerate graphics and multimedia. Android apps can leverage those blocks to reduce power consumption and improve performance. The processor enhances Intel® Bridge Technology (Intel® BT) and optimizes support for ARM* applications on Chromebooks.2

For game developers, the 2020 and 2021 versions of the Unity Engine now include x86 build support and specific Chrome OS improvements. These features include the following benefits:

Building for x86 is straight-forward:

To improve game performance even more, look through the advanced settings and adjust the defaults to match your specific needs, as shown in this graphic: Our top recommendation for improving performance on Intel® devices is to add X86 built-in support if you use the standard libraries in the applications. To do that, add the following lines to your build.gradle file (used with X86 and X86_64 ABIs).

SIMD versions of applications with vectorization support benefit from this optimization. This example app improves performance with Intel AVX2 as tested on Chromebooks with Intel processors.

12th generation Intel Core processors take full advantage of this technology by supportingIntel AVX2 instructions on both Performance-cores and Efficient-cores.

The Intel VTune Profiler helps identify and fix performance bottlenecks. It also helps optimize application performance, system performance, and system configuration for Android apps. In using it, the key is to minimize the time it takes your program, module, or function to run. You should identify the hot spots in the app and optimize them with the compiler or by hand. To optimize them:

The following figure depicts the utilization of physical and logical cores: Intel and Google have worked together to improve the user experience and performance of ARCVM for Android workloads. These optimized solutions will be available on Chromebooks with 12th generation Intel Core processors.

Google, Android and Chromebook are trademarks of Google LLC.