Thomas Endres and his colleague Martin Förtsch are Intel® Black Belt Software Developers and Intel® Software Innovators from Germany that are lucky enough to have their hobby also be their job. They spend their days playing with drones, 3D cameras, virtual reality, and robots – literally creating technology for the future. How fun does that sound? 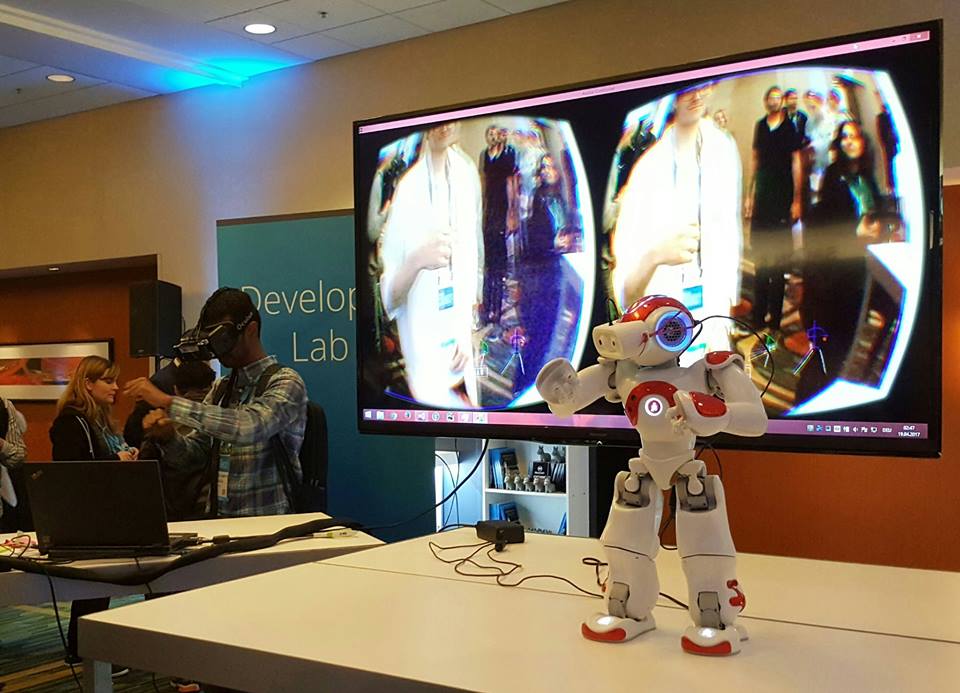 My name is Thomas Endres and I am a software developer from Munich. I studied computer sciences at the Technical University in Munich. After that, I joined TNG Technology Consulting. Recently, I got promoted to Associate Partner at TNG.

In 2013 I began to work on gesture controlled applications with my colleague Martin Förtsch, during our free time. Back then, we were controlling a Parrot AR Drone with bare hands using a Perceptual Computing Camera - the predecessor of the Intel® RealSense™ camera. But we did not stop there.

After that we started to create an exhibition project for the Deutsches Museum in Munich. Using the same Intel® RealSense™ camera and gesture control, you can drive a small rover through the showcase.

A year later we created an arcade bird shooter HTML5 game with which you could shoot birds on the screen. You could do this by forming a "pistol" with your hands and doing a shot gesture in front of an Intel® RealSense™ camera.

In 2015, our company decided to fund our showcase projects. So we created a device with which you could see the world through the eyes of a Terminator. The pictures of two cameras were streamed into an Oculus* Rift VR headset. On top of these images we showed some additional information gathered by an Intel® RealSense™ camera like the contours of faces, names associated with these faces, pulse and the currently displayed emotions.

Our current project features a Nao robot. You can control the robot's movement using gestures. But you can also see the world from the perspective of the robot using a virtual reality headset. For this project, we also used a lot of IoT hardware and an Intel® IoT Gateway. 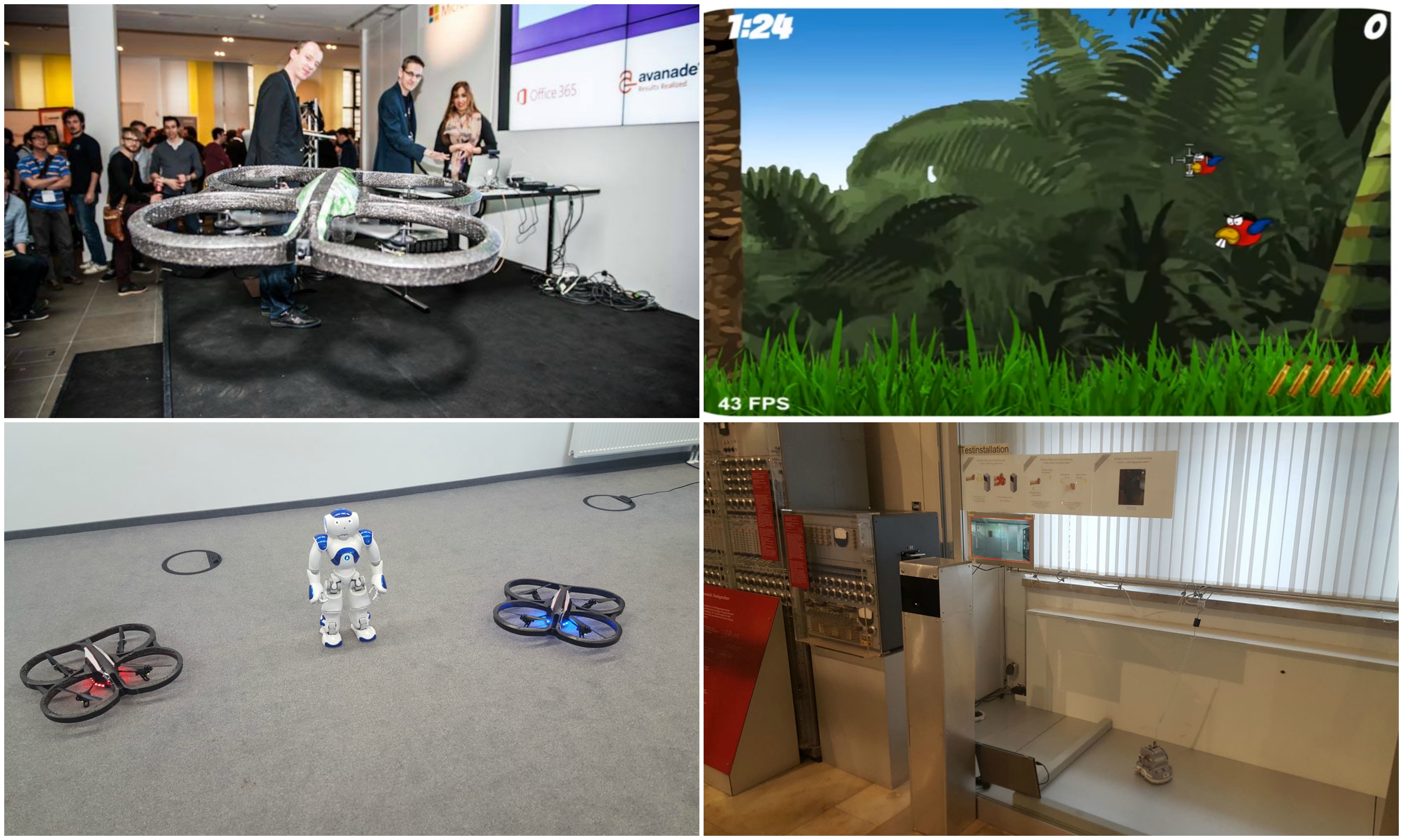 What got you started in technology?

I got my first PC pretty late - the year was 1997 and I was 13 years old. But I immediately fell in love with technology and started programming BASIC applications just a year after that. It took until

2002 that I created my first web application. By then I needed a management application for the LAN parties we organized (which had 100 to 200 participants). So I learned Perl and I created a functional LAN party management system which was then used until 2006.

What projects are you working on now?

Currently I am working on multiple projects. The first one is a VR arcade shooter game. It is actually the virtual reality version of the gesture controlled arcade bird shooter from 2014. Using an HTC Vive VR headset and its controllers you try to shoot as many birds as possible within a given period of time.

The second project we are working on is a holographic application using the Microsoft* Hololens. A person is filmed by a 3D camera like the Intel® RealSense™ camera. The point cloud of this person is segmented and then sent to the Hololens. There it is reconstructed and shown as a 3D mesh. So it is some kind of a 3D video conferencing application - like the Jedi council in the Star Wars films.

Since the Intel® RealSense™ web SDK has now been discontinued, I am also working on a WebSocket based API to re-implement this Web SDK from scratch. I plan to publish this SDK as Open Source Software later this year.

Within my company I am also involved in some ideas involving machine learning. The projects there are currently just beginning to evolve so I cannot say much about it right now. But we expect to see some first results soon. So stay tuned for some updates!

Tell us about a technology challenge you’ve had to overcome in a project.

For Project Avatar we wanted create a fully immersive out of body experience. Since we didn't want to have any delay for the camera image we had to cut down on video compression and use MJPEG streaming. But then, the video signal used up huge amounts of the WiFi network, so we had to build our own custom router using a router board with two separate WiFi networks. Now our project consists of a router board, a laptop, an Intel® IoT Gateway, a VR headset, a 3D camera and lots of more hardware. To get all of this hardware set up quickly, we built a custom suitcase which is exactly the size International Air Transport Association (IATA) recommends for a carry-on bag. 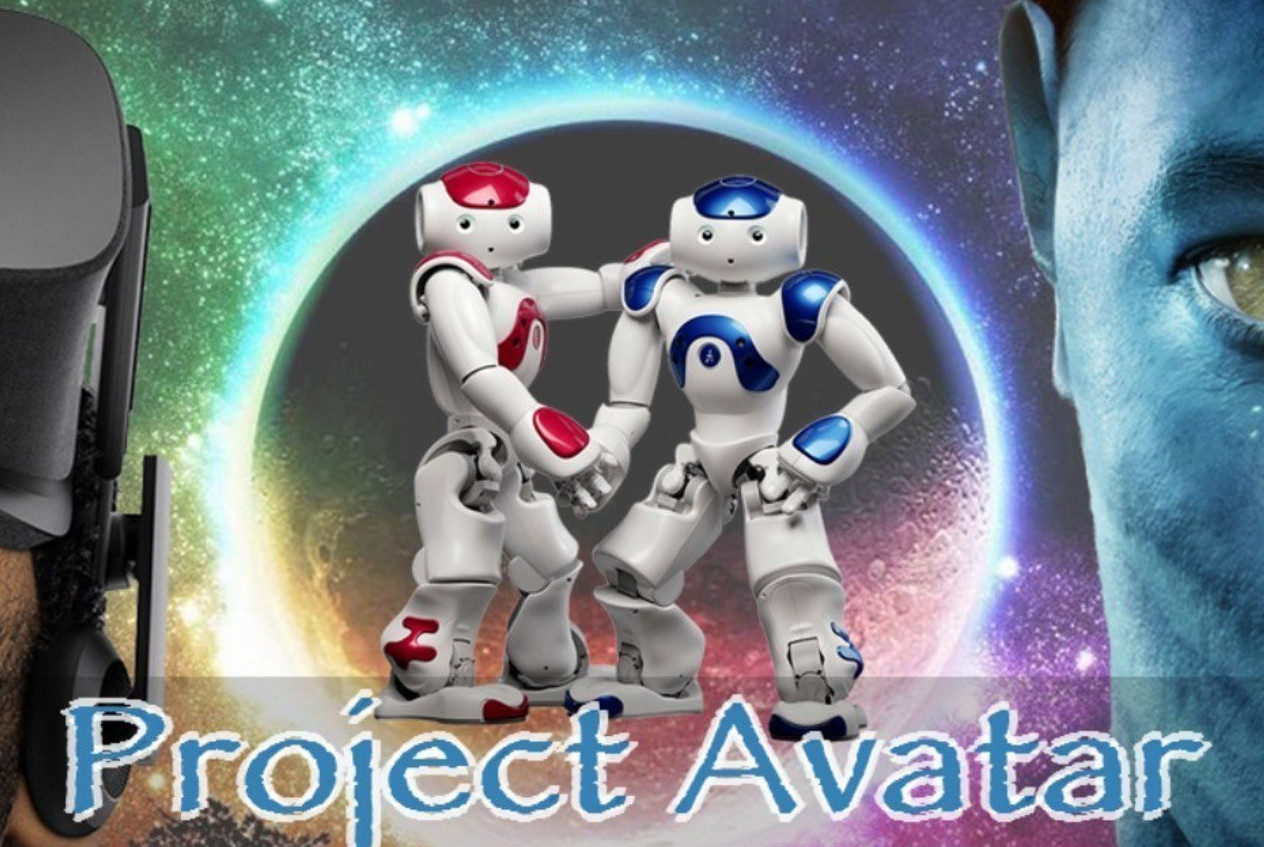 What trends do you see happening in technology in the near future?

Machines will become more autonomous. This is true for robots as well as it is for cars or software. Intelligent robots will be able to do more and more tasks that require less engineering and include more learning. Autonomous cars will be able to drive the streets alone; and intelligent software will help you find clothes that fit or prefill insurance forms for you.

In the meantime, IoT devices will require less power and last for a much longer time. They will be collecting more data and transmitting it using IoT protocols like Narrowband IoT or LoRa. The data will need to be aggregated, so there will be a huge demand for Big Data analytics as well. In order to keep private data private, intelligent data anonymization will also become more important.

Outside of technology, what type of hobbies do you enjoy?

I am extremely lucky since my hobbies happen to be part of my work. Building next gen showcases and travelling the world showing those to interested people is the best hobby you can ever have.

Get the full Black Belt program overview and meet the Black Belts. Learn about our Innovator programand meet the innovators. We also encourage you to check out Developer Mesh to learn more about the various projects that our community of innovators are working on.