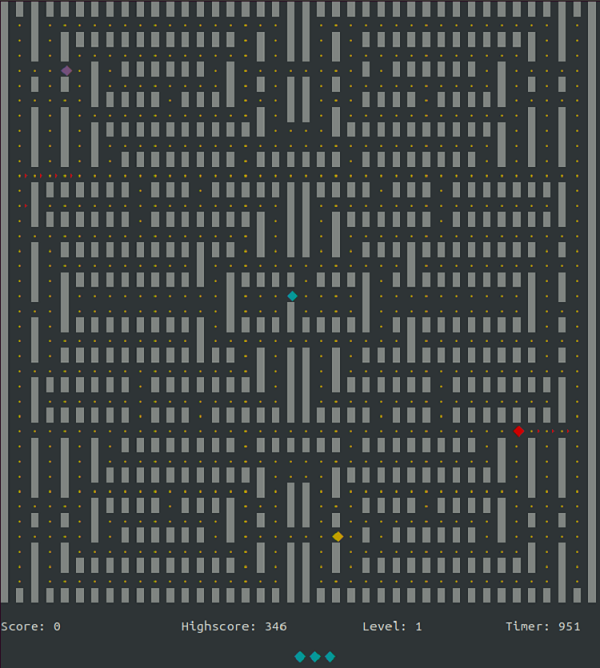 Let's go over the structure of the PMAN code. There are seven classes in total: Point, Bomb, Player, Alien, Intro, Board_State, and State. Each class contains its own functions, but the main classes we will look at include:

Designing the structure and types of objects that will be persistent is vital for creating PMEM-aware code with libpmemobj++. The persistent data structure is created by first determining a root object. In this case the state class is the root, meaning it is unique and essential to reach all the other objects created in the program. We discuss the state class and what makes it the root in detail later on. For the PMAN code sample we use the following persistent data structure. 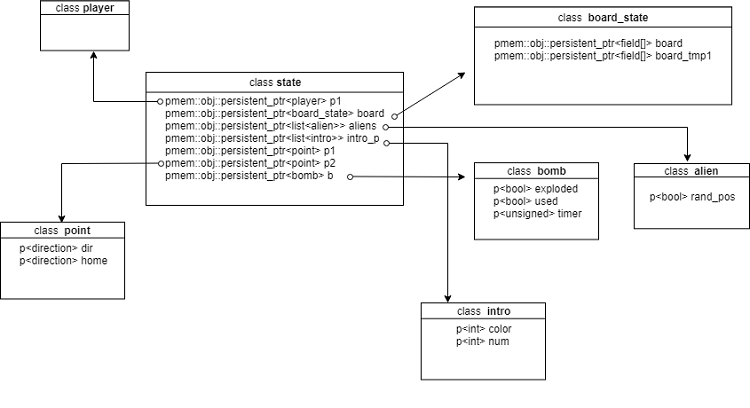 In the main function of PMAN.cpp you can see how the initialization logic of PMAN works. The first thing it does is to check that the number of arguments, as well as its order, is correct. The following snippet shows the correct format necessary for invoking the game: It requires the game file name and gives the option to enter a map file if you have something other than the default map:

In the next few lines it checks whether the game session file specified previously already exists. One of two things can happen from here. Either the file entered exists and the game runs using the data structures within it (by first memory mapping the file), or the file doesn't exist and the game creates a new one (also initializing a new game with fresh new data structures).

The code snippet below shows how this happens. In this case the pool checks the LAYOUT_NAME stored in state and checks whether it matches the game file entered.

Now that we know how the game starts to execute, let's go over the three main classes that we identified earlier. Throughout each of the three classes we will go over what makes items in each persistent.

The State class is the root object, as we discussed earlier, while showing the Unified Modeling Language* (UML*) diagram of the program. The root object connects all the other objects inside a persistent memory pool. This way, if the memory range location of the pool changes, you can still access all the other objects from the root. In PMAN (as well as in other persistent memory code samples using libpmemobj++), the pool object pointer (POP) is the object used to interface with a memory pool. We can use POP to get a pointer to the root object, which in PMAN is State:

If you want a refresher or want to read more on pools and root objects, check out the introduction to libpmemobj tutorial in pmem.io.

The first function inside the State class is state::init(), which is used to initialize the game. In this function we encounter the first transaction.

The transaction inside state::init() is manual—meaning it must be committed at its end (Transaction::commit()). This transaction is protecting the process of initializing the game points and direction. In this case, intro_p is a list of objects used in the game. The transaction ensures that the game does not end up half-initialized.

The memory allocated in the constructor above and pointed to by the pointer for the objects board and board_tmpl is then freed using a destructor that calls delete_persistent, as shown below:

The player class contains the function player::progress that checks the input from the keyboard and uses that input to set the proper direction for the player in the game. In addition to setting the direction of the player, it allows you to place bombs that will blow up the entire row where the player is and provide you with the points available within that row. You can see how the function uses a switch case to perform different actions based on the input provided by looking at the code snippet below:

Once the direction (dir) is set, the point::move function in the point class moves the object in that direction by adjusting position points.

Now that you have a general sense of how the PMAN game works and the knowledge of the specific elements that make the game persistent, you can build and run the game.

First, download and build PMDK. Installation assistance, including dependencies, can be found in the PMDK Readme.

After doing so you can see that the gameFile is where the game session is stored. This is either created the first time you play, or you can open a game file where you previously played. If this is your first time, make up a name for your file and start the game like this:

The PMAN game launches as soon as you type that command and now you can start playing the game. To start the game press s. To quit press q. In the game the player can be controlled either by the ARROW key or similarly by the j (left), l (right), i (up), and k (down) keys. The game also implements the bomb, which you can trigger by pressing the space bar or b. A bomb gets you points for the entire row or column until it hits a wall—but be careful, for they can kill you too. You can press q any time to quit the game. You can always resume the game by using the same file name to launch it.

The goal of this game is to get the highest score by guiding Pac-Man to consume all the dots and other items to win points and move up the levels.

The goal of the PMAN code sample is to introduce you to the persistent memory programming model, so that you can see what additions make a program persistent, allowing you to apply them to your developments. We introduced you to examples of persistent memory pools, pointers, and transactions, and provided additional links so that you could learn more about each topic.

Let's go over briefly what we saw in the PMAN code sample. The State class was the root object that anchors all the other objects inside a persistent memory pool. PMAN also used transactions throughout the State class to protect the data structure from corruption. We introduced the make_persistent and delete_persistent functions with respect to pointers and we covered persistent pointers. If you're interested in learning more, I encourage you to dig deeper into PMAN, or explore our other code samples on software.intel.com or in our GitHub* repo. Also visit our other PMDK examples on GitHub.