The Intel® Intelligent Storage Library (Intel ISA-L) includes support for erasure coding. This article describes how the use of erasure coding can benefit a storage application and explains the Intel ISA-L implementation, which uses Reed Solomon error correction (RS EC). The attached sample application demonstrates the efficiency of RS EC on Intel Architecture CPUs, showing how with Intel ISA-L erasure coding, error correction can be performed on the CPU sufficiently fast enough to not induce a bottleneck or add substantial latency to storage devices. To download the sample application, click on the button at the top of this article.

Historically, RAID storage arrays protected against data loss through mirroring (RAID 1) or calculating parity (RAID 5), which required additional storage and resulted in slower throughput. To address the problems with RAID 5, I/O Host Bus Adapters (HBAs) were given dedicated circuitry to offload parity computation instead of performing the computations on the CPU. However, with the advent of low-latency NVMe storage devices connected directly to the PCIe bus, this offload of parity calculations can no longer be done in the data path, which eliminates any advantage of offloading parity calculations. In addition, the continuing march of Moore’s Law has reduced the computational cost of parity calculations to fractions of a CPU cycle per byte, meaning a single Xeon core can compute tens of gigabytes per second.

The largest change to storage architecture has been driven by the emergence datacenter-scale storage solutions. As applications have scaled from server to rack to datacenter scale, so have the demands on the storage infrastructure that support them. Without access to data, a datacenter is nothing more than an elaborate space heater, so storage availability and fault tolerance have become the most crucial challenges in the of the data center. For this reason, datacenter scale systems are designed for continuous operation and at least 99.999% availability (about five minutes of downtime per year). To achieve this goal, two techniques are pervasive: multi-replication (typically triple-replication) and Reed-Solomon erasure codes (RS EC), both of which ensure there are always copies of the data available despite single or dual failures.

Triple replication has the advantage of simplicity. It is computationally easy to maintain three copies of data, and this technique is used in scalable file systems like Hadoop HDFS, but it does have a drawback: it requires that a system’s raw storage capacity is (at least) 3X the design capacity. By contrast, RS EC has historically been computationally intensive, but is far more flexible and space efficient, enabling raw capacity to be only 1.5X the design capacity. For storage applications requiring large data sets, this difference in the underlying availability algorithm can translate into huge differences in capital and operating expenditures.

In this article, we demonstrate that RS EC efficiency on Intel Architecture CPUs has improved to become a viable choice even for directly PCIe-connected, high-throughput, low latency media like NVMe devices. The Intel ISA-L implementation of RS will be used to demonstrate that it is now possible to keep up with current storage hardware throughput requirements by doing RS error correction in software instead of offloading to dedicated hardware or using drive-based parity computations

Note: Depending on the platform capability, Intel ISA-L can run on various Intel® processor families. Improvements are obtained by speeding up the computations through the use of the following instruction sets:

Intel ISA-L has the capabilities to do RS EC in software instead of offloading to dedicated hardware or using drive-based parity computations. This capability is well suited for high throughput storage applications. This article has the sample application that simulates a RS EC scenario, using a set of memory buffers instead of discrete I/O devices. Memory buffers are used for two reasons: first, to put the focus on the software overhead instead of the media latency involved in I/Os; and second, to allow this example to be run on any system configuration.

The sample application creates up to 24 different buffers in memory to store data; a larger data set of up to 256 MB of data is distributed across these buffers. ISA-L’s RS algorithm implementation is used to calculate error correction codes that are stored and distributed with the data across the buffers. Storage times, i.e., the time to calculate the RS EC are measured and logged. To simulate failure, up to two memory buffers are made inaccessible and the program demonstrates that the data can be completely and correctly recovered from the remaining buffers. Recovery time is also measured and logged. The approach is compared to published results from parity-based (RAID 5) systems.

Building the sample application (for Linux):

Getting Started with the Sample Application

The sample application contains the following:

This example goes through the following steps at a high-level work flow and only focuses on those routines demonstrating the whole data recovery using the Intel® ISA-L RS implementation.

In this example, the program runs using 24 buffers, and 2 of those buffers are lost. Therefore, 2 buffers are used to hold the error correction codes, and the other 22 are holding the data.

From the ex2 directory:

Sizes must be formatted the following way: 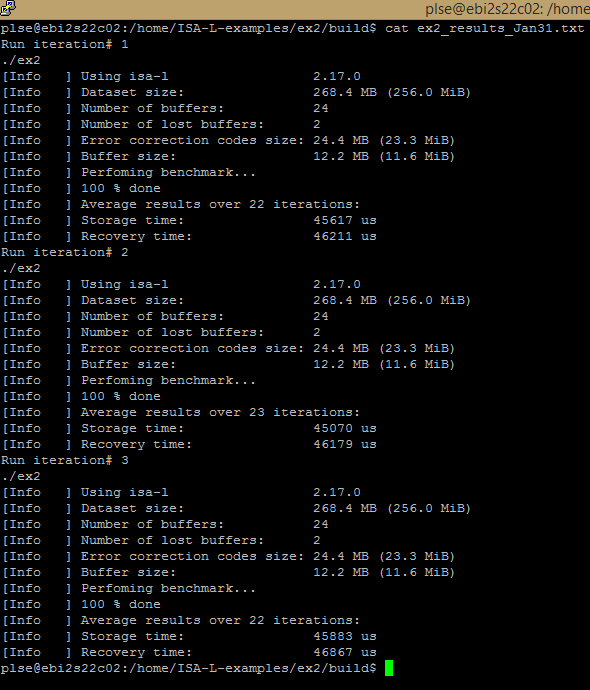 From the output, the program displays the results of the storage and recovery time applying the Intel ISA-L RS method. With the Intel® Xeon® processor server, the RS computation can be done efficiently and quickly as demonstrated in the example runs.

As demonstrated in this quick tutorial, developers have a how-to guide to incorporate the Intel ISA-L RS EC feature into their storage applications along with the full build instructions. The example shows how to prepare the data and recover it, which can help developers adopt the technology. Intel ISA-L provides the library for storage developers for quick adoption to your specific application run on Intel® architecture.