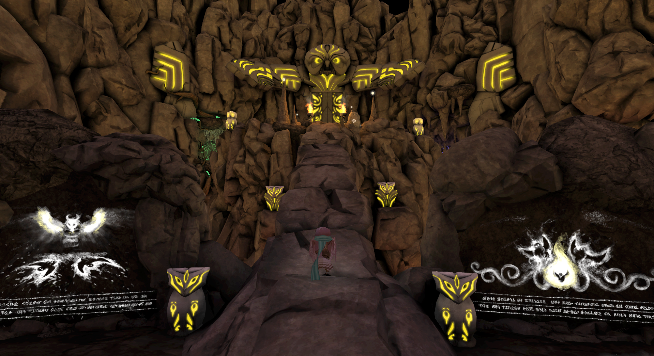 The University of Wisconsin (UW)–Stout has been sending students, faculty, and alumni to the GDC in San Francisco since 2011, through both grant-funded travel and class-based domestic study-abroad opportunities. In addition, UW–Stout has attended the IUGS and always left inspired to create games and someday be a participant, as well. UW–Stout is happy to be selected as a participant this year because of its consistent rankings in the Princeton Review. Everend is a game that represents everything that UW–Stout is about: bringing artists, designers, and programmers together to create imaginative virtual worlds, stories, and characters.

The team says, “The game idea was very loose at first and closer to a Japanese role-playing game in style. Kaia, then our unnamed purple owl protagonist, lived underground with a village of burrowing owls when their world started to shake and crumble. It was Kaia’s job to figure out why. During a pitch presentation, a professor who was sitting in remarked, ‘Why not have the character be out of place? Have the cave be a strange place,’ and that comment colored the rest of our development and sent us in the direction you see today. Environmentally, the game is inspired by the massive caves of Hang Sun Doong in Vietnam, where the caverns are large enough that forests grow within. We wanted to capture the ambient, colorful, vast feeling we got from looking at pictures of caves like these instead of the cramped, dark, wet feeling usually conjured up by cave environments.”

Players explore a vast, ancient cave and overcome its many obstacles as Kaia, an adolescent owl. Everend is a single-player, exploration-driven 3D puzzle platformer. Players solve various problems and puzzles throughout the environment as they progress through various levels of the caves, trying to reach the surface. Kaia collects various items throughout the journey, which allows for increasingly complex problems and solutions. The team wanted to focus on the atmosphere and ambience of the game environment, so they kept the UI and mechanics simple and noninvasive to place the focus on exploration. Players can also try to piece together the story of what happened in the caves as they explore by studying the cave environment and clues left behind in the form of cave paintings. Everend is a short, self-contained experience, with a character and environment the team hopes will leave a lasting impression.

The team says, “Our development team was lucky to have access to a dedicated game design computer lab in the School of Art & Design at the UW–Stout. The lab regularly updates their technology every two years with new workstations, so we had the opportunity to work with HP workstations that had game industry-standard Intel processors, complimented by high-end graphics cards and more than enough RAM. In addition, we were able to use these machines in the playtesting and exhibition of the games, making it a great overall experience that was all built on the foundation of Intel processor technology.”