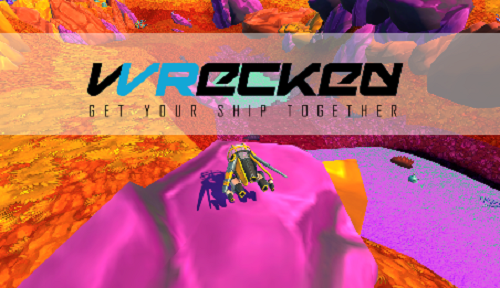 Wrecked: Get Your Ship Together

In UU’s Entertainment Arts and Engineering program, all students working on their capstone projects and all masters student projects, are automatically entered into a university event where faculty not involved in the actual game projects review all entries. They select four finalists. A subcommittee of three faculty members chooses the finalist. This year, “Wrecked” was chosen.

Bob Kessler, Executive Director and founder of the School of Computing, says: “I was co-teaching the class when the games were originally created. We went through a long process that involved studying award-winning games, coming up with many different ideas, narrowing those down to a handful, paper prototyping, and then digital prototyping to try to find the fun. Sydnie's team had a goal to try to solve the problem that the VR experience is typically for one person at a time. For example, if you had a party, then only one person can experience the game. They decided that by integrating players using their mobile phones with the person using the VR headset, it would be a better experience for all.”

“Wrecked: Get Your Ship Together” is the living-room party game for VR! One player is on the Vive while everyone else in the room plays on their mobile phones. Together, they must repair their ship to escape the planet on time. The Vive player must navigate a foreign planet, both on foot and by hover ship, to scavenge parts and repair the team’s mothership. The mobile players command helpful drones which follow the player and give aid. Specifically, the mobile players can give directional guidance, or they can obtain speed boosts for their captain by successfully executing orders.”

Another problem specific to VR is that of traveling world-scale environments in a room-scale experience, a living room is generally a bit smaller than the world of Skyrim. The development team’s solution is to give the player a hover ship. This means their actual physical chair is part of the play space. When they sit, they can fly around world-scale. When they stand up, they can experience the full joys of room-scale.

The development team feels both the mobile integration with VR and the physical augmentation of the game are compelling, and they are excited to be exploring this new space.

The EAE studio has over 100 computers all with Intel hardware in them. Besides the wonderful and fast Intel processors, the team had donated SSDs for its computers. Having an SSD is great as it eliminates the latency for file and other access.