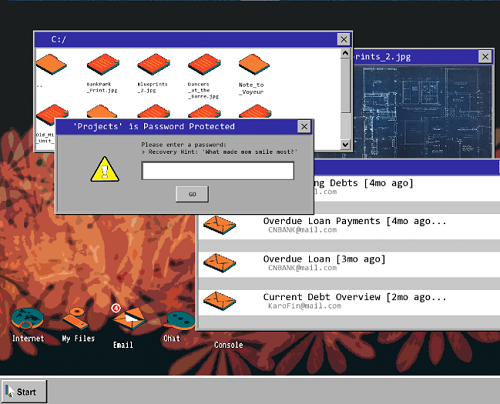 The “Project Perfect Citizen” (“PPC”) team was a part of the undergraduate Computer Science: Computer Game Design program. This year about 90 students produced a total of 19 games as a part of that program. At the end of the school year, the university held a ceremony called "The Sammy Awards" (the UCSC mascot is a banana slug named Sammy Slug) to celebrate the games from both the undergrad and masters programs. PPC won the grand prize, and UCSC has been helping show the game at various events.

These seven people were a part of the CS: CGD program, and all contributed to design and programming:

From outside the major:

Mark Biundo says: “’PPC's’ creator, Alex Vincent, was inspired by the story-telling power of narrative-driven games such as “Her Story and Gone Home,” as well as the powerful social commentary of “Papers Please.” Shortly after the Snowden leaks, Alex decided to combine those personal narratives with the modern social issue of privacy versus security. This lead to a unique combination of rhetorical commentary, voyeuristic storytelling, and engaging gameplay.

“PPC” is a surveillance story-telling game. It puts the player in the shoes of a pseudo-NSA surveillance officer. Their job is to investigate suspected cyber criminals by accessing their computers, reading through their files and emails, and using that information to determine if the suspect has committed a crime. Each game level is a series of puzzles immersed in a narrative, and players will have to understand the character's story if they want to complete the level. At the same time, players will be encouraged to question if their actions are justified, if the government should have the power to conduct such intensive surveillance, and whether or not the people they are investigating deserve to be punished, regardless of their guilt. All of this is presented in a simulated Windows* 95-era operating system to achieve a "hacker" aesthetic and retro feel.

“PPC” was built in the team’s own game engine on top of Simple Fast Multimedia Library (SMFL). It is very lightweight and does not require many resources from the player. However, during the dev process, most (if not all) of the team members were developing on laptops based on Intel hardware, and it was much easier to rapidly iterate on the fastest computers.