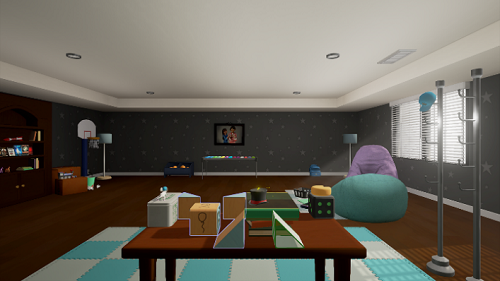 SMU Guildhall was asked to participate in the inaugural University Games Showcase in 2014 and proudly participated with “Kraven Manor.” The 2014 event was a great experience for both the students and the university, resulting in an invitation they look forward to annually. The team's selection process is the same every year.  There is a small panel of three that reviews the capstone games developed over the school year.  The panel members are: Gary Brubaker – Director of Guildhall; Mark Nausha – Deputy Director Game Lab: and Steve Stringer – Capstone Faculty. This panel uses three very high but simple measures: 1) quality in game play and visuals; 2) does the game demonstrate the team game pillars of the program?; and; 3) are the students excellent ambassadors of their game and the university? Guildhall has quite a few games and students that exceed the panel’s expectations, making their job very difficult in choosing only one team.

The team says: “The idea for ‘Mouse Playhouse’ started out as a companion-based platformer for PC but slowly evolved into a VR puzzle game. The team rallied on the idea of being the first VR Capstone game and developing it for a new platform. Therefore, after the team decided to do a VR game, we studied what was fun about playing in VR by playing games already on the market. We found that throwing and being able to move objects around were fun mechanics to do in VR. This is why the main mechanic of the game revolves around moving and placing objects in specific locations to solve a puzzle. Additionally, we included throwing mechanics as extra mini-games such as shooting basketballs into a toy basketball hoop and throwing darts. We wanted to use simple but fun mechanics to showcase the skills of our developers to create a game for a new platform.”

‘Mouse Playhouse’ is a light-hearted VR puzzle game in which you manipulate objects to solve puzzles and guide your pet mice towards the cheese. In Mouse Playhouse, you can also throw objects around, play basketball, darts, and even play the xylophone. There are a total of 15 levels in the game and each one presents a different challenge. Players must use the blue objects to guide the mice away from trouble and towards the cheese. During development, the level designers created clever solutions that enabled them to record mixed reality using Unreal Engine. During development, Unreal Engine did not have support for more than two Vive controllers and mixed reality recording. So the level designers used various tools such as the Unreal Sequencer to “fake” mixed reality in the engine. This allowed the team to record gameplay and live footage on a green screen for their trailer.

The students used Intel® Core™ i7 processor-based desktops won at a previous Intel GDC Showcase event for development. With the addition of an NVidia* 1080 GPU, these machines provided a lag-free development environment. When the students did usability testing, a clear result was that high-performance computing was required for a comfortable VR experience.