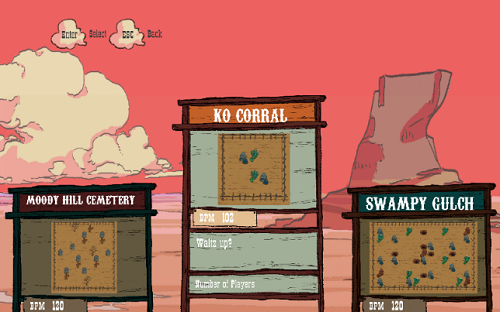 Minoong "JD" Ji says: “Beatstep Cowboys was first created at the 2015 Global Game Jam as ‘The Beat, The Step, and the Cowboys.’ We (JD, Vivek, and Tao) were three programmers who arrived at the Game Jam site with no team, so we just decided to team up with each other. Just like the topic we were given 'What do we do now?’ we panicked and kept asking ourselves ‘What do we do now?’ At the last minute we came up with a game about what you have to do in a limited time, but everything has to be done to the beat of the music, because we all loved music! JD had experience making software instruments so he knew how to code rhythm. Tao had pixel art skill that he acquired from hundreds of hours of Minecraft. Vivek had flashing ideas for design, so we knew it could be worked out. After getting positive reactions to the game on the Internet, JD decided to continue development with an all-round player Amy and an incredible artist King Kong, recognizing that this gameplay has great potential to be expanded and deepened. We renamed the game ‘Beatstep Cowboys’ and revamped the game with a completely new look, new characters with all different skills, and fun and crazy levels. The game was greenlit on Steam Greenlight in 2016, and we're working hard to release our game soon.”

You are in the duel of your life. You have four beats to decide what moves to make. Your opponent is making their move. What do you do?

This is the life of the Beatstep Cowboys.

Beatstep Cowboys is a quirky Wild West duel that combines quick real-time strategy and rhythm-based gameplay. Players each control a cowboy, choose a sequence of moves to make, and try to shoot the other player before they are shot. But unlike other strategy games, players select their moves at the same time, to the beat of the soundtrack. Beatstep Cowboys is all about creating close calls and the element of surprise. The result is a competitive game that is easy enough for a little kid to pick up, but provides advanced players the opportunity to stretch the limits of their logical and predictive thinking.

Minoong "JD" Ji says, “We used desktop machines powered by Intel processors that were provided by the Global Game Jam 2015 site, and their superb performance and reliability really helped us to complete the prototype of our game in only 48 hours.”