Zero-packet-loss rate is an important indicator of network-forwarding performance as well as the focus of the Data Plane Development Kit (DPDK) development team. This paper introduces the test bench settings and test methods used for zero-packet-loss testing in DPDK virtualization functions. While the topology of a vhost/virtio zero-packet-loss test is the same with the north-south physical-VM-physical (PVP) throughput test, it requires special platform configuration. The real-time configuration of the operating system and the virtio and vring lengths have great impact on the real-time processing of packets.

To gain better zero-packet-loss performance, we need to optimize vring size and real-time configuration of the host and virtual machine (VM).

A larger vring size offers more data-buffer space, which should reduce the packet loss rate. In previous versions of QEMU*, the rx_queue_size and tx_queue_size of the virtio device provided by QEMU are a fixed value of 256 descriptors, which is not enough buffer space. In the new version of QEMU (2.10), these parameters are configurable up to 1024 descriptors. Configure as follows:

During our performance test, we observed around 74% performance gain when we increased the queue size from 256 to 1024.

Real-time Configuration of the Host and PM

The zero-packet-loss feature requires higher stability and real-time performance. Existing servers are mostly multi-core systems. Linux* system interruptions and multitask scheduling greatly affect the real-time performance of the system, resulting in a higher possibility of packet-loss. Here are a few cases that can be optimized:

Throughout the test, these real-time settings can bring four to five times greater zero-packet-loss performance.

In DPDK 17.05, the DPDK test team released a performance report for vhost/virtio on X86 XEON platform.

In DPDK 18.05, zero packet loss test results are as follows: 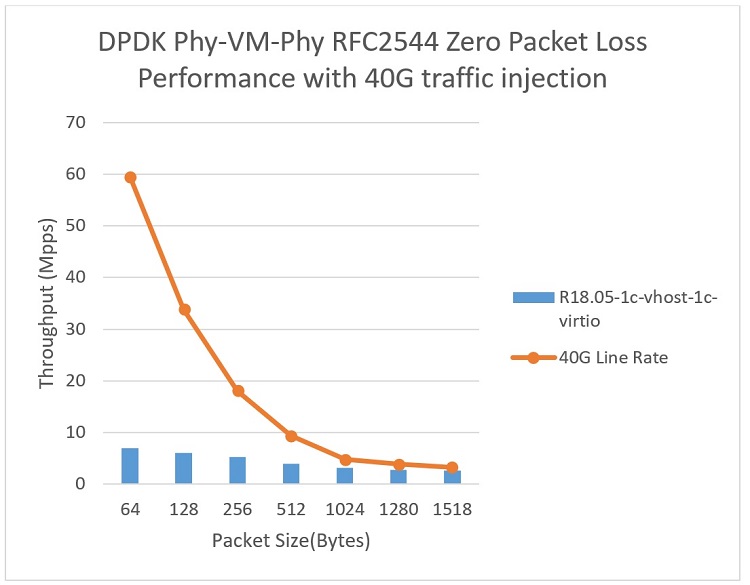 For more information on the latest performance configuration and test command set for vhost/virtio, refer to the document below:

Zero-packet-loss performance is one of the key indicators for network products. This article introduced test bench settings and test methods used for zero-packet-loss testing in DPDK virtualization functions, and highlighted scenarios for optimization.

Yao Lei is an Intel software engineer who is mainly responsible for work related to DPDK virtualization testing.