This article describes how to use Intel® Advisor and Intel® VTune™ Amplifier in a Linux* distributed environment. While specifically designed to collect performance data at the node and core level, both tools can be used with MPI. The document covers basic utilization with an MPI launcher from the command line, as well as more advanced customizations.

Running a profiler at scale is often interesting for problems that may not be reduced to execution on a single node. While in some cases reducing the workload size is an effective way to save time and effort in the profiling stages, it is often difficult to determine what minimum workload size may be used per node without modifying the performance characteristics of full production cases.

Unless mentioned explicitly in the text, the MPI task counts and node numbers used in the examples are not special in any way, and do not represent limitations of the tools. Note that this document is not intended to serve as a complete description on how to use Intel VTune Amplifier or Intel Advisor, and will assume that the environment has been setup in advance by sourcing the relevant files.

The latest version of Intel VTune Amplifier contains improved reporting on MPI related metrics, and it is extremely simple to use from the command line. In general, the simplest way to execute it in a distributed environment is:

In a distributed environment the results directory name is a requirement and may not be left blank. Intel VTune Amplifier will exit immediately with an appropriate message if an output directory name is not provided.

Let’s see an example using the Intel® MPI Library launcher, mpirun, and the pre-defined collection hpc-performance. Assuming that the application of interest is run using 64 MPI ranks and 16 ranks per node, the command line would look like this:

When run in this manner Intel VTune Amplifier presents data regarding MPI imbalance and some details regarding the MPI rank in the critical path of execution in the Summary. This is shown in the CPU Utilization section, as shown in the figure to the left. 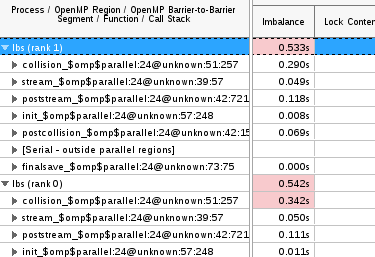 It also allows for grouping functions under each process so that they can be compared directly in the Bottom-up tab. The figure on the right shows details for the first two ranks of an application named lbs. This ability to compare MPI process performance to one another can provide insights into load balancing issues and other performance characteristics critical for scalability.

It is important to note that, if not using the Intel® MPI Library, the command line must add the option -trace-mpi for Intel VTune Amplifier to be able to collect MPI rank information and display it as described above. For details on the many capabilities and command line options available, please visit the Intel VTune Amplifier Documentation Site.

Intel Advisor can be run from the command line in a similar manner to Intel VTune Amplifier:

An output directory name is not a requirement, since a directory will be created for each MPI rank used in the execution. Let’s consider a survey study using 64 MPI ranks and 16 ranks per node:

This generates 64 output directories named rank.0, rank.1, ... rank.63. While Intel Advisor does not automatically aggregate multiple rank data, this collection allows for manually studying the differences across ranks. Data for each rank can be loaded separately into the GUI for further analysis.

The example shown above corresponds to just one of the many collection types available in Intel Advisor. For additional information on the extensive capabilities and command line options available please consult the Intel Advisor Documentation Site. For a more detailed description of the remote collection process you can read the in-depth article Analyzing Intel® MPI applications using Intel Advisor.

When using Intel® MPI Library version 5.0.2 or newer the gtool option may be used to restrict the collection to a subset of ranks:

In this example Intel VTune Amplifier will generate a single directory, with name “hpc_out.node1. Inside of this directory there will be sixteen data directories with the profiling information for MPI ranks 0 through 15.

It is also possible, but more cumbersome, to do this with a configuration file or through command line arguments. When using the Intel® MPI Libary the command above can be executed as:

Or simply creating a configuration file with the following content:

And then using it with the mpi launcher:

If not using the Intel® MPI Library, please check your MPI provider documentation for information on how to execute heterogeneous workloads.

This run will generate a single hpc_perf.node1 directory with 16 data directories inside - one per MPI rank. An additional rank.16 directory will be generated at the top level of the working directory with the collected Intel Advisor data.

When using Cray* MPICH  it will be necessary to set the PMI_NO_PROXY variable in the environment for Intel Advisor to complete its collection and analysis correctly:

Software updates to Cray* MPICH may change timeout values which are relevant to running Intel Advisor. If timeouts are observed, it is recommended to increase the default values of the variables PMI_MMAP_SYNC_WAIT_TIME and PMI_CONNECT_RETRIES. Testing shows the following values are safe in most cases:

It is simple to collect performance data with Intel Advisor and Intel VTune Amplifier for MPI and hybrid MPI+Threads codes, with the flexibility of profiling all ranks or a just subset of them. The command lines for both tools follow the standards described in their user guides and require no special configuration other than the minor details presented in this article.