Due to increasing digitization and economic growth, the volume of data at rest and in motion continues to grow exponentially. As this volume increases, and as more customers and services move to the cloud, the need for security becomes paramount. That is why data is cryptographically protected while moving over the network and while at rest in storage. Since these cryptographic security operations can be computationally intensive, 3rd generation Intel® Xeon® processors come with an instruction set that's based on Intel® Advanced Vector Extensions (Intel® AVX-512) for increased speed. Intel AVX-512 is an instruction set that can accelerate performance. It uses CPU registers that are 512 bits wide to pack multiple operations into one CPU clock cycle.1

On Linux*, Intel provides software libraries that allow applications to take advantage of these cryptographic operations. Using a multibuffer technique, multiple independent data buffers can be processed in parallel (asynchronously) with the CPU instructions previously mentioned.

Nearly 80% of all web traffic uses HTTPS, which is also referred to as HTTP over transport layer security (TLS) or Secure Sockets Layer (SSL), for secure networking on the internet.3 HTTPS is now prevalent in browsers used in phones, tablets, and cars, due to the broad use of Representational State Transfer (REST) APIs in distributed applications and microservices. We're specifically speaking about the acceleration of cryptographic operations in HTTPS traffic for web applications. An HTTPS web transaction typically involves:

For example, the asynchronous NGINX* web server queues up multiple requests that are passed down to the TLS library stack as shown in the following figure. OpenSSL* can handle these requests asynchronously and hands them off to a crypto provider plug-in called Intel® QuickAssist Technology (Intel® QAT) engine that supports: 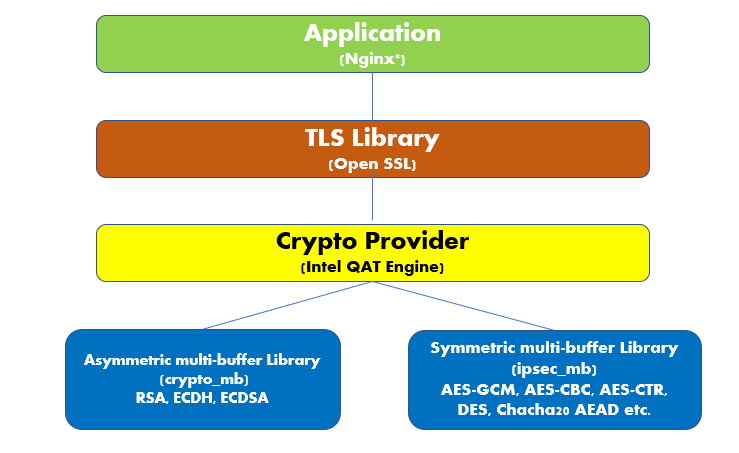 To ease the adoption of cryptographic instructions for 3rd generation Intel Xeon processors, Intel partnered with BitNami* (VMware*) to publish Debian* VM images for Linux that incorporate the software libraries previously mentioned in popular cloud providers like Azure. This partnership provides the customer with a functional and efficient VM image that they can use to accelerate HTTPS traffic in web applications. As part of this exercise, Intel published two VM images–one for WordPress* and one for NGINX. WordPress is an open-source content management system that has been a popular website management system for years. NGINX is the most popular web server today.5 While the NGINX image provides an NGINX web server with a software stack from Intel, the WordPress image is based on the NGINX web server, PHP*, and the MariaDB* database along with the cryptographic software stack from Intel.

To learn more and download the Azure VM images, see NGINX and WordPress.

These VM images are available in the Azure marketplace. When run on VMs based on 3rd generation Intel Xeon processors, they can offer great performance benefits for the previously discussed cryptographic operations. The Azure portfolio for general-purpose infrastructure as a service (IaaS) includes multiple VM offerings based on these processors:

All of these hyperthreaded VMs that are based on 3rd generation Intel Xeon processors can reach an all-core turbo clock speed of up to 3.5 GHz. They feature Intel® Turbo Boost Technology v2.0, Intel AVX-512, and Intel® Deep Learning Boost.

To demonstrate how these cryptographic CPU instructions improve performance, Intel partnered with Principled Technologies* to publish performance reports comparing Azure Dv5 VMs based on 3rd generation Intel Xeon scalable processors and Dv4 VMs based on 2nd generation Intel Xeon scalable processors for WordPress and Siege. WordPress is an open-source content management system and Siege is a load generator. This workload, based on OSS performance, uses WordPress for content, NGINX as the web server, FastCGI Process Manager (PHP-FPM) for application logic, and MariaDB as the database server.

As shown in Figure 2, these workloads improve performance6 by as much as 1.53x with Dv5 VMs for Azure that are based on 3rd generation Intel Xeon processors, and that are on different VM sizes (8, 16, and 64 virtual processors) when compared to earlier Dv4 VMs based on the previous version of the Intel Xeon processor. 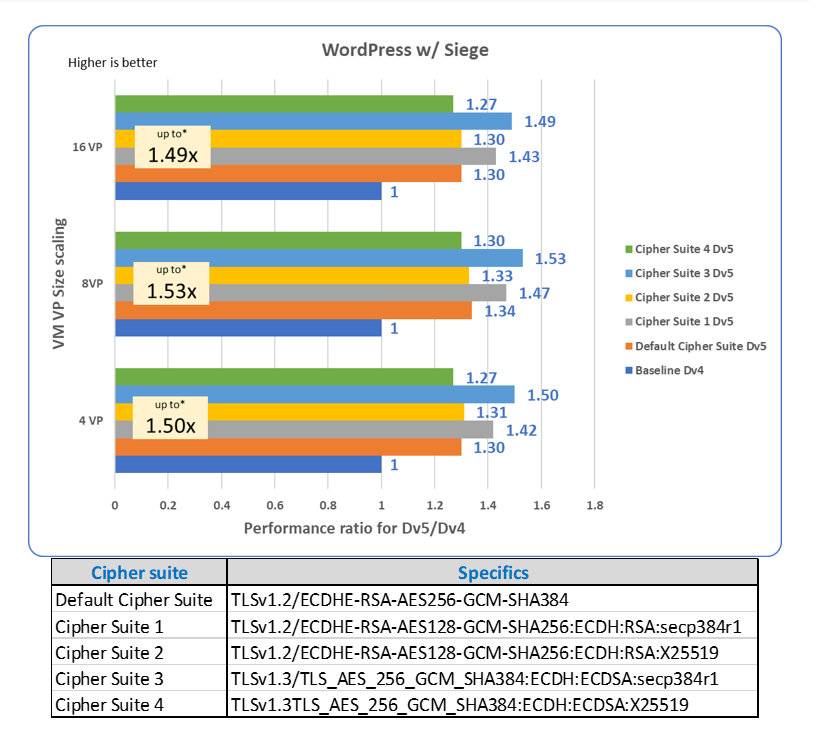 To check if the capability is exposed in an operating environment (such as a Linux host or Linux VM), you can run the command lscpu | grep Flags.

The CPU features highlighted in the lscpu output indicate that these features are exposed and present in your operating environment. For example:

The performance benefits that users experience depend on how much time the CPU spends performing the cryptographic operations–the higher the hot spots, the greater the benefits.

TPROC-C is an online transaction processing (OLTP) workload. Such a workload typically occurs when a database receives multiple user requests to access the data and change it over time. These modifications, which are called transactions, must adhere to the properties called atomicity, consistency, isolation, and durability (ACID) to ensure data validity and consistency.

As shown in Figure 3, these workloads attain performance5 gains up to 1.4x with Dv5 and Ev5 VMs for Azure that are based on the 3rd generation Intel Xeon processors on different VM sizes (8, 16, and 64 virtual processors) when compared to the previous generation of Dv4 and Ev4 VMs.

Azure conducted performance stress tests using Apache JMeter* on the Dv5 VMs that used 3rd generation Intel Xeon processor with the previously mentioned VM images from Intel and BitNami. Those images, which include the software library stack for cryptographic operations, achieved significant performance gains. They used JMeter, a tool based on Java* for the stress tests, which simulated a 30-minute load test on a WordPress blog. A JMeter simulation consists of user actions on the WordPress blog. For example: Sign in, create a blog, and then post a comment.

The results are listed as follows and depicted in Figure 4. 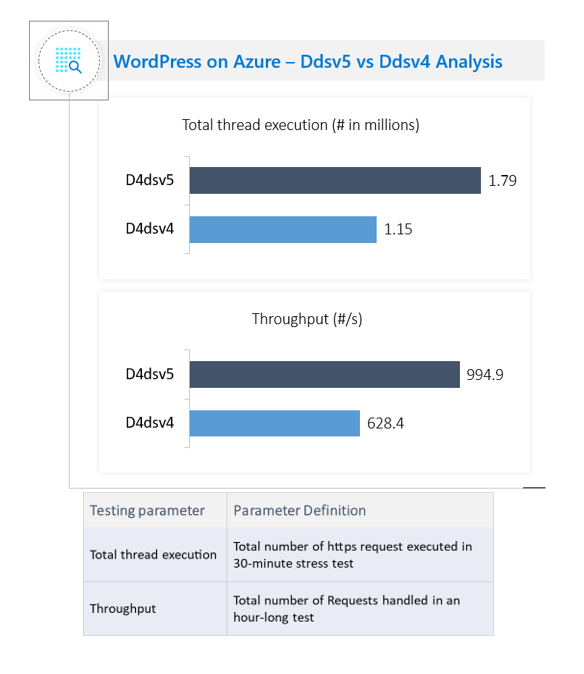 For more details and context for the previous performance observations, refer to the Compute learning track in:

Most online activities–banking, streaming, chatting, and reading–use HTTPS. As the volume of data generated and consumed grows exponentially, so do the computational resources required to keep these channels secure via TLS based HTTPS protocol. The 3rd generation Intel Xeon Scalable processor and its cryptographic new instructions provide efficient, significant benefits over the previous generation. To use these benefits seamlessly, VM images using a software stack from Intel are now available from cloud service providers like Azure and can be deployed in the new VM SKUs based on the 3rd generation Intel Xeon Scalable processors.

3 Usage Statistics of the Default Protocol HTTPS for Websites

5 NGINX Is Now the Most Popular Web Server, Overtaking Apache*