In this article we demonstrate how Intel® VTune™ Amplifier can be used to identify and improve performance bottlenecks while running a neural network training workload (for example, training a Canadian Institute for Advanced Research's - CIFAR-10 model) with deep learning framework Caffe*.

For this tutorial we start with the fork of BVLC/Caffe, which is dedicated to improving performance of Caffe running on a CPU, in particular Intel® Xeon® processors. This version of Caffe integrates the latest version of Intel® Math Kernel Library (Intel® MKL) and Intel® Machine Learning Scaling Library (Intel® MLSL) and is optimized for Intel® Advanced Vector Extensions 2 and Intel® Advanced Vector Extensions 512 instructions. 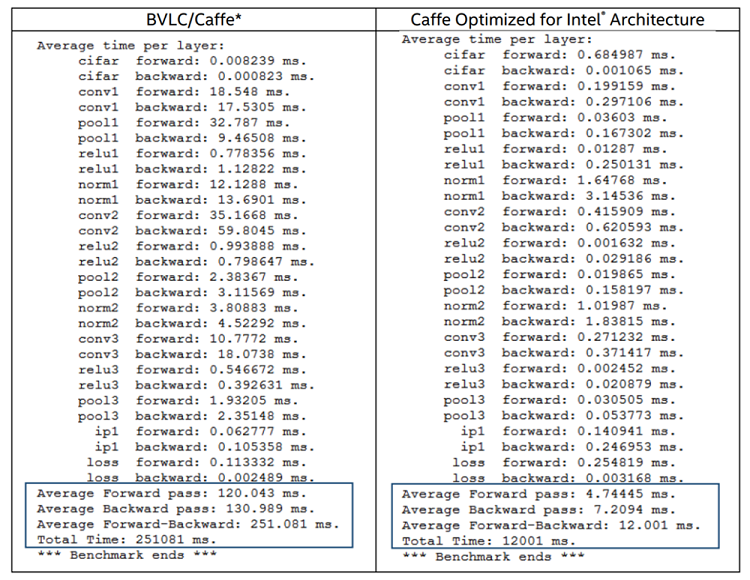 Benchmark results were obtained prior to the implementation of recent software patches and firmware updates intended to address exploits referred to as "Spectre" and "Meltdown". Implementation of these updates may make these results inapplicable to your device or system.

Software and workloads used in performance tests may have been optimized for performance only on Intel® microprocessors. Performance tests, such as SYSmark and MobileMark, are measured using specific computer systems, components, software, operations and functions. Any change to any of those factors may cause the results to vary. You should consult other information and performance tests to assist you in fully evaluating your contemplated purchases, including the performance of that product when combined with other products. For more information, see Performance Benchmark Test Disclosure.

As demonstrated in the following article, Caffe Optimized for Intel® Architecture: Applying Modern Code Techniques and also from Figure 1, we can see that there is a significant difference in performance between BVLC/Caffe and Caffe optimized for Intel architecture both running on an Intel CPU. As a result, we have set the goal of this article to investigate whether we can further improve the performance of Caffe optimized for Intel architecture without modifying the framework (or its sources), and by simply using the currently available Intel software developer tools like Intel VTune Amplifier and Intel® MLSL.

Check out the Caffe source from the intel/caffe Git* repository:

Modify the Makefile.config to enable use of OpenCV 3 and Intel MLSL for the Linux* operating system. More about Intel MLSL in a later part of the tutorial.

Code block 1. Modifications to the Makefile.config.

Once Caffe is successfully compiled we prepare and use one of the example models, CIFAR-10 with CIFAR-10 image-classification dataset to investigate a performance bottleneck of Caffe CIFAR-10 training on a CPU.

The CIFAR-10 dataset consists of 60,000 color images, each with dimensions of 32 × 32, equally divided and labeled into the following 10 classes: airplane, automobile, bird, cat, deer, dog, frog, horse, ship, and truck. The classes are mutually exclusive.

Steps to get and prepare the CIFAR-10 dataset:

With the default hyperparameters, it currently takes about 14 minutes to complete the full training using the script provided in the CIFAR-10 example directory which runs 70k iterations to achieve 82.34 percent accuracy with the default batch size of 100.

With hardware event-based sampling, Intel VTune Amplifier's memory access analysis can be used to identify memory-related issues, like non-uniform memory architecture (NUMA) problems and bandwidth-limited accesses, and attribute performance events to memory objects (data structures), which is provided due to instrumentation of memory allocations/de-allocations and getting static/global variables from symbol information.

Additional information about Intel VTune Amplifier training and documentation can be found on the product webpage. 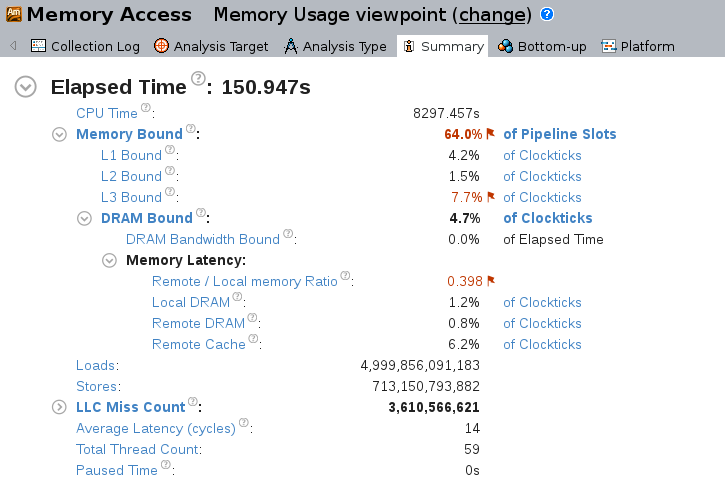 In NUMA machines, memory requests missing last level cache (LLC) may be serviced either by local or remote DRAM. Memory requests to remote DRAM incur much greater latencies than those to local DRAM. Intel VTune Amplifier defines this metric as a ratio of remote DRAM loads to local DRAM loads. Referring to the above Figures 2 and 3, it can be seen that the remote to local memory ratio is about 40 percent, which is considered to be high, and accounts for higher Intel® Ultra Path Interconnect (Intel® UPI) traffic. 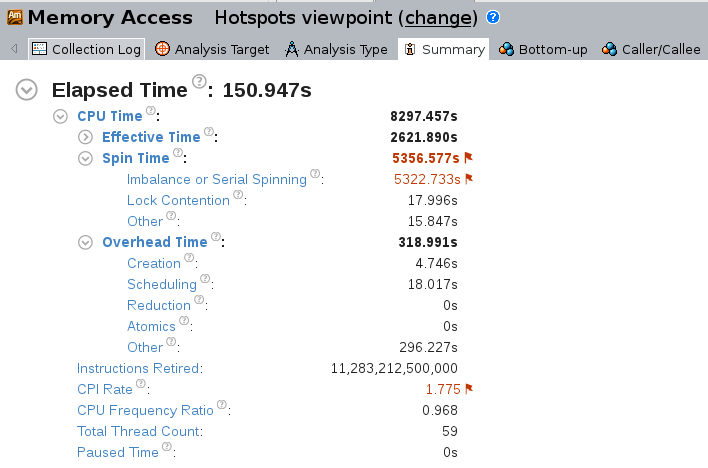 Imbalance or serial spinning time is CPU time when working threads are spinning on a synchronization barrier consuming CPU resources. This can be caused by load imbalance, insufficient concurrency for all working threads, or waits on a barrier in the case of serialized execution.

In order to improve the ratio of remote to local memory access, it is recommended that cores must keep frequently accessed data local. One way to achieve this is to identify and modify each of the contributing source code regions to affinitize its data; however, this would require major code restructuring. An alternative approach is to use an out-of-the-box Intel MLSL to perform parallel distributed training across the two NUMA nodes so that each process allocates and accesses its data from the same NUMA domain.

In general, there are two approaches of achieving parallelism in distributed training, data parallelism and model parallelism. The approach used in Caffe optimized for Intel architecture is data parallelism, where different batches of data are trained on different nodes (that is, Message Passing interface (MPI) ranks/processes). The data is split among all the nodes, but the same model is used on all of the nodes. This means that the total batch size in a single iteration is equal to the sum of individual batch sizes of all nodes. The primary purpose of Intel MLSL is to allow multinode training and scale training across hundreds of nodes. However, it does not hurt to use the same library to perform training on two NUMA nodes of a single 2-socket server. Additional information on how the distributed training works can be found here.

Using Intel MLSL with Caffe optimized for Intel architecture is as simple as recompiling Caffe with an additional flag—Use Intel MLSL: = 1, in the makefile.config (this flag was already enabled in the steps shown above to compile Caffe in Section 2, so we can skip recompiling Caffe).

In order to compare performance of the baseline with the distributed training, we use the same total batch size of 100 per iteration of the stochastic gradient descent algorithm. As a result, we set the batch size to be 50 for each node.

For distributed training, train_full.sh script can be modified as given below. Here, environment variable OMP_NUM_THREADS and KMP_AFFINITY is set to assign one OpenMP* thread to each physical core with compact affinity (see Thread Affinity Interface). Also, environment variable I_MPI_PIN_DOMAIN="numa" is used to facilitate execution of only one MPI process per NUMA node (see Interoperability with OpenMP API).

Code block 3. Modifications to the run-script—train_full.sh.

Now we profile the distributed training for the CIFAR-10 model for 12k iterations using Intel MLSL: 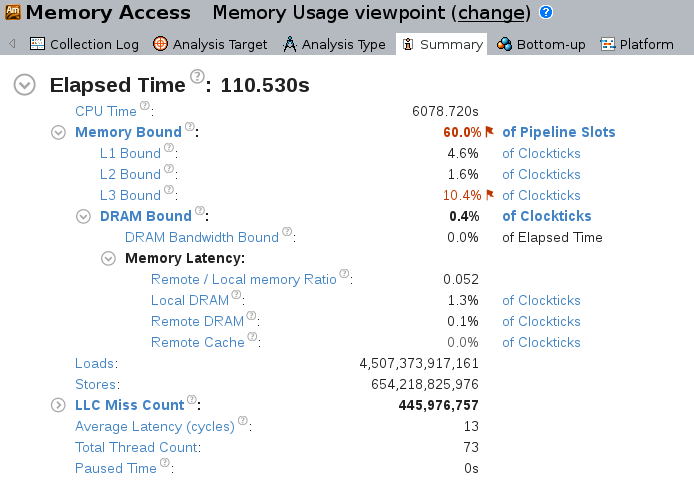 From the above figures 2 and 5, it can be seen that the overall remote to Local Memory Ratio has reduced significantly; that is, from 40 percent down to 5 percent, thereby reducing the observed total Intel UPI bandwidth. Also, the total elapsed time has now reduced from 150 seconds to 110 seconds. 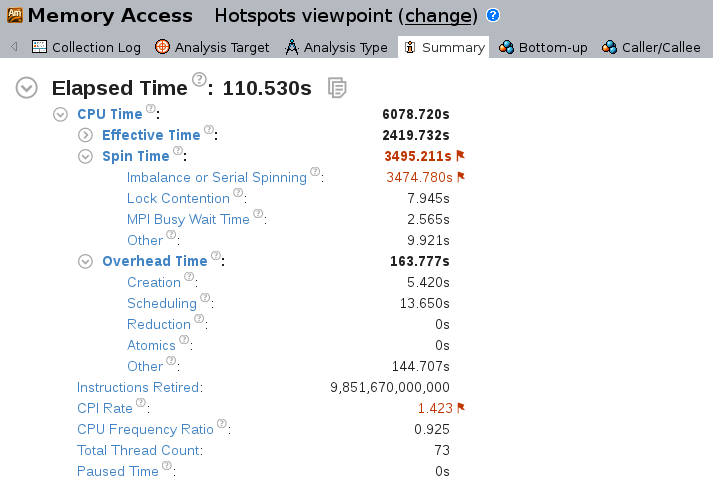 We see some improvements in the overall imbalance or serial spinning time but it is still significantly high. As a result, the execution performance of this workload does not scale linearly with the increased thread count (in accordance with Amdahl's law). The accounted spin time can be caused by either load imbalance, insufficient concurrency for all working threads, or waits on a barrier in the case of serialized execution.

Achieving any performance gain by improving load balance and/or parallelizing serial execution parts would require significant code refactoring and is beyond the scope of this article. However, to check if some amount of that spin time is caused due to insufficient concurrency and threads waiting for work, we can try reducing the number of worker (OpenMP) threads and see if it reduces the overall thread-spin time.

To conduct this experiment, we rerun the CIFAR-10 training for 12k iteration with VTune Amplifier, but now with OMP_NUM_THREADS environment variable set to 16. This forces a maximum limit of 16 threads per MPI process running on each NUMA node. 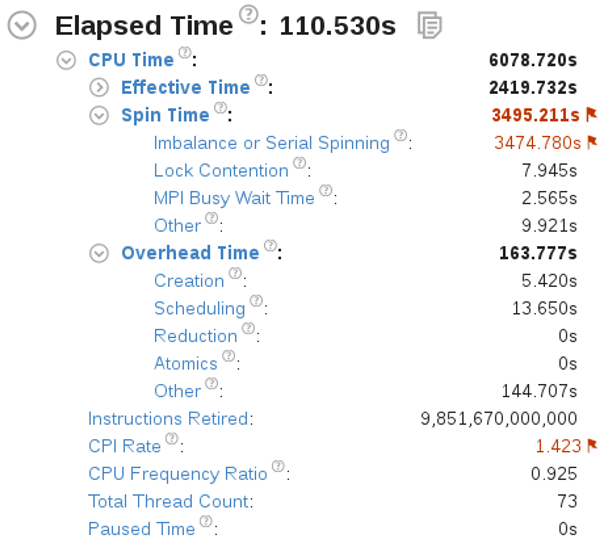 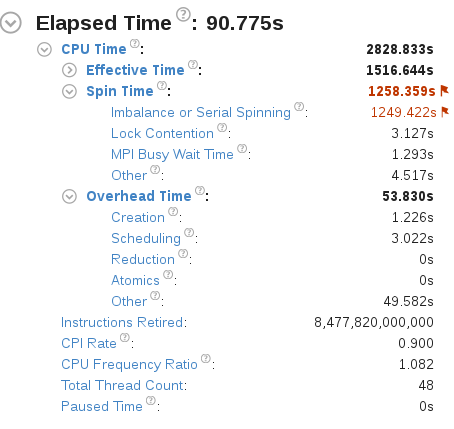 The above comparison shows an improvement in the elapsed time, from 110 seconds down to 91 seconds, but at the same time it also signifies that the running workload has concurrency issues, which is affecting the simultaneous execution of a high number of parallel threads. Fixing such issues would require significant code restructuring in Caffe to implement further optimizations such as collapsing inner and outer loops in parallel regions of code, changing scheduling and/or granularity of work distribution, and identification of other serial regions of code and parallelizing them, and is beyond the scope of this article.

Finally, we would like to verify whether the above changes improve our total elapsed time to train the full model for 70k iterations with the same default hyperparameters. In order to do this, we modify the train_full.sh script as given below:

Code block 4. Modifications to the run-script—train_full.sh.

From code block 5, we see that we can achieve accuracy of 82.15 percent (approximately similar to what we achieved at the beginning of the article) in up to 45 percent less time with distributed training and tuned number of OpenMP threads.

Performance testing for the results provided in this paper were achieved on the following test system. For more information go to Product Performance.

In this article we demonstrated how Intel VTune Amplifier can be used to identify NUMA and thread-spinning issues on a neural network training workload running with Caffe. With the help of Intel MLSL and tuning for number of threads, we were able to achieve out-of-the-box performance improvements without actually modifying the Caffe framework or any of the model hyperparameters.

Using distributed training with Intel MLSL, we were able to reduce the ratio of remote to local memory access, and thus improve the elapsed time by approximately 27 percent. Also, by reducing the number of OpenMP threads for the current workload, we were able to achieve even lower elapsed times by reducing inefficient spin time. However, it is important to note that this might not be true for every other training model trained with Caffe. Ideally, even with this workload, we should be able to use all the cores in parallel efficiently without a lot of imbalance or serial spinning time, but that would require some code refactoring.