This technology introduces a flexible new tier to the traditional memory and storage hierarchy, architected specifically for data center usage. By deploying systems enabled by this new class of memory, customers can optimize their workloads more effectively by moving and maintaining larger amounts of data closer to the processor, thus minimizing the higher latency that can occur when fetching data from the system storage. In this article, we examine how Intel developers optimized Apache Spark* for Intel Optane DC Persistent Memory.

Intel Optane DC Persistent Memory has two operating modes: App Direct and Memory Mode. Memory Mode is the ‘out of the box’ answer that requires no code changes to the application and leverages the large capacity of Intel® Optane™ DC memory modules as volatile memory. In this mode, the DRAM acts as another level of cache, and the persistent memory capacity becomes the main memory. Data placement in memory mode is controlled by the memory controller instead of the application. In App Direct mode, on the other hand, persistent memory is exposed to the OS as a special block device, and DRAM is used as the main memory.

One of the challenges facing large Apache Spark* workloads is that of performance bottlenecks when accessing data from either local or remote storage, with the latter being more pressing as it becomes more popular to store data in the cloud. As the data size increases, traditional ways of caching, such as those used by operating system’s page caches, tend to be unable to effectively reutilize data to avoid excessive I/O wait times.

To this end, Intel developed the Optimized Analytics Platform (OAP), an open source middleware for Apache Spark providing a smart caching layer between data movement and computing with the following features:

OAP’s cache-aware scheduler can intelligently schedule processes in computing nodes where the data to be processed is located. Doing so reutilizes previous queries’ used data and results. The benefit is a significant reduction in the amount of I/O accesses needed for a wide range of workloads. OAP is an open source solution that is easy to use and works on any hardware. Nevertheless, and as we will show in this article, OAP has been optimized to fully take advantage of Intel® Optane™ DC Persistent Memory Modules.

In order to understand why adding Intel® Optane™ DC Persistent Memory to OAP makes sense, realize that OAP effectiveness depends heavily on the size of the cache, and this cache is stored in DRAM in the original design. DRAM can become significantly expensive when scaling beyond certain module sizes, or directly not available. Intel Optane DC Persistent Memory, on the other hand, is cheaper than DRAM and can scale all the way to 3TB per CPU socket.

The rest of this article explains how OAP was modified to take advantage of Intel Optane DC Persistent Memory. In each step, we show the different technologies considered, the problems encountered along the way, and what developers did to overcome them.

When considering how to make OAP use persistent memory, the development team started with testing the persistence libraries libpmem and libpmemobj from the Persistent Memory Development Kit (PMDK), a collection of libraries and utilities for managing persistent memory. PMDK, while developed and maintained by Intel, is vendor neutral, fully open source, and is built upon the SNIA NVM Programming Model. These libraries build on the Direct Access (DAX) feature available in both Linux and Windows, which allows applications direct load/store access to persistent memory by memory-mapping files on a persistent memory aware file system.

The idea was to cache OAP’s large chunks of data in persistent memory. Although the libpmem and libpmemobj libraries are specifically designed for persistent memory programming, the level of abstraction offered by their APIs wasn’t quite the right one. Their scope aims more toward applications that require complex persistent data structures. OAP, on the other hand, required something more high level. A mechanism allowing it to cache large chunks of data—corresponding to files in the old design—easily and efficiently was needed.

The team then looked to the Memkind library, a user-extensible memory allocator built atop jemalloc with a malloc()/free()-like API. Memkind, which is also part of PMDK, enables partitioning of the heap between different kinds of memory. Benefits of managing large, volatile memory with memkind include:

Persistent memory is attractive due to its low latency, huge storage capacities, and support from PMDK. But there is a common challenge of fragmentation that caching systems and any long-running application must handle, which wasn’t solved by the available set of libraries.

Let say, for example, that you have an address space of 384 bytes and make the following allocation requests:

If, later, you decide to free A and C:

Your resulting address space would have two chunks of 128 bytes available. In principle, you have 256 bytes, which means that you should be able to call malloc to allocate 256 bytes successfully. However, an error stating not enough memory would be returned since there isn’t a contiguous capacity of 256 bytes available. 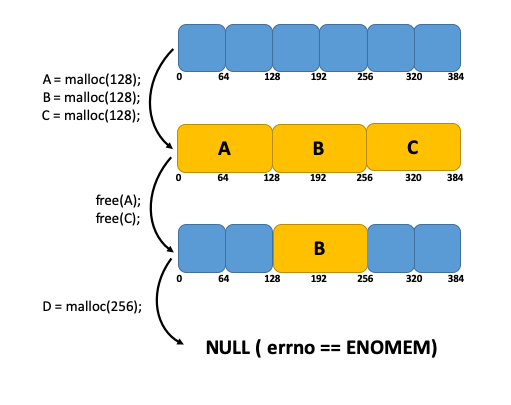 There are multiple ways to allocate/free memory in a heap, and each mechanism has its pros and cons. Compacting garbage collectors and defragmentation algorithms, for example, require processing to occur on the heap to free unused allocations or move data to create contiguous space. Another type of allocator, called “slab allocators,” usually defines a fixed set of different sized buckets at initialization without knowing how many of each bucket the application will need. If the slab allocator depletes a certain bucket size, it allocates from larger sized buckets, which reduces the amount of free space. Neither of these approaches was fully satisfactory for the task at hand, given that applications would either suffer memory fragmentation or a performance impact due to the processing needed for memory management.

Developers were still looking for something lightweight and efficient to create an in memory, local, and scalable cache that would take advantage of the large capacities available with persistent memory.

After trying a few different solutions, an accelerator called vmemcache was developed to help resolve fragmentation issues. Libvmemcache, written in C, is an embeddable, lightweight in-memory caching solution with a key-value store at its core. It is designed to take full advantage of large-capacity memory, such as persistent memory, efficiently using memory mapping in a scalable way.

Thanks to Persistent Memory’s ability to support cache-line granularity, Libvmemcache efficiently uses extent allocation for relatively small blocks. The figure below shows that if a single contiguous free block is not available to allocate an object, multiple, non-contiguous blocks are used to satisfy the allocation request. This allowed developers to sidestep fragmentation problems that affect many in-memory databases and achieve very high space utilization for most workloads. 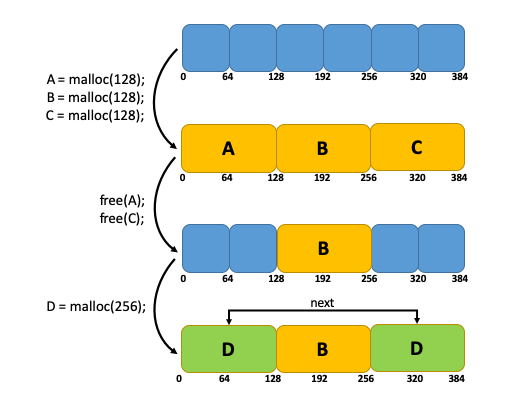 Buffered LRU combines a traditional LRU doubly linked list with a non-blocking ring buffer to deliver high scalability on modern multi-core CPUs. When an element is retrieved, it is added to this buffer, and only when the buffer is full (or the element is being evicted), the linked-list is locked, and the elements in that buffer are processed and moved to the front of the list. This method preserves the LRU policy and provides a scalable LRU mechanism with a minimal performance impact. The figure below shows a ring buffer-based design for the LRU algorithm. 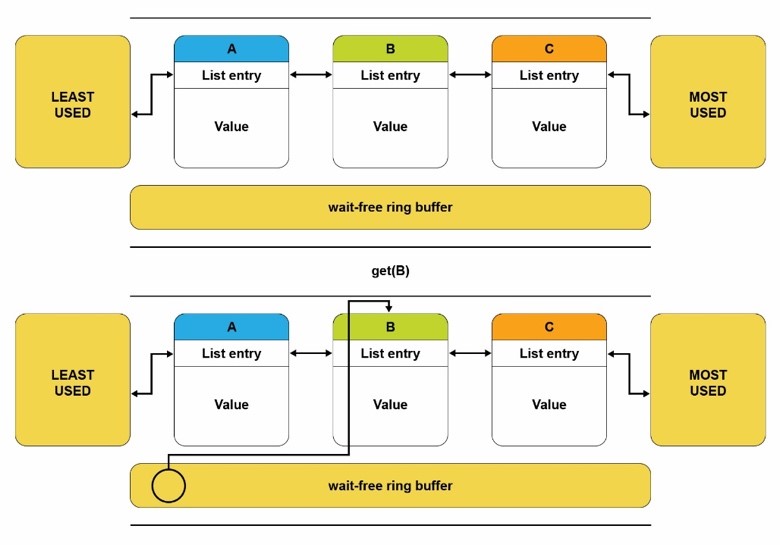 Performance of Spark with OAP

Each server configuration is chosen in order to have a fair comparison with respect to total cost of ownership (TCO), although this is never an exact science given that prices of DRAM change widely over time. Normally, we can think of a server with 768GB of DRAM to have a similar TCO than a server with 192GB of DRAM and 1.5TB of Intel Optane DC Persistent Memory (with all the other components constant), so using 1TB allows us to play it safe.

For the analysis, we use the 9 most I/O intensive queries out of the total 99 queries making up the decision support workload. By virtue of being I/O intensive, these queries are the best to showcase the value of adding Intel Optane DC memory modules. Nevertheless, we plan to update this article with the performance results for the whole set of 99 queries, so stay tuned if you wish to know more. Likewise, we are performing another experiment (which will be also included in this article) to see the added benefit when scaling out the execution to multiple nodes in a cluster setting.

The cache size is configured to be 610GB for the DRAM-only server and 1TB for the server with persistent memory. This gives the latter a capacity advantage of nearly 400GB (+64%). In all experiments, 9 threads (multi-tenants) are used as query-submitting clients.

The first set of experiments are run with a 2TB data scale, where both servers can hold the entirety of the working set size (613GB) in the cache. 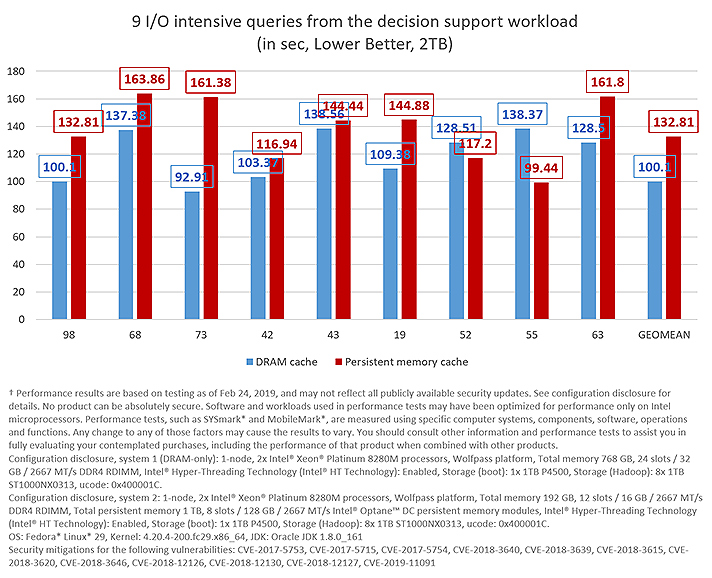 For the second set of experiments, a 3TB data scale is used with a working set size (920GB) fitting only in the server with a persistent memory cache. 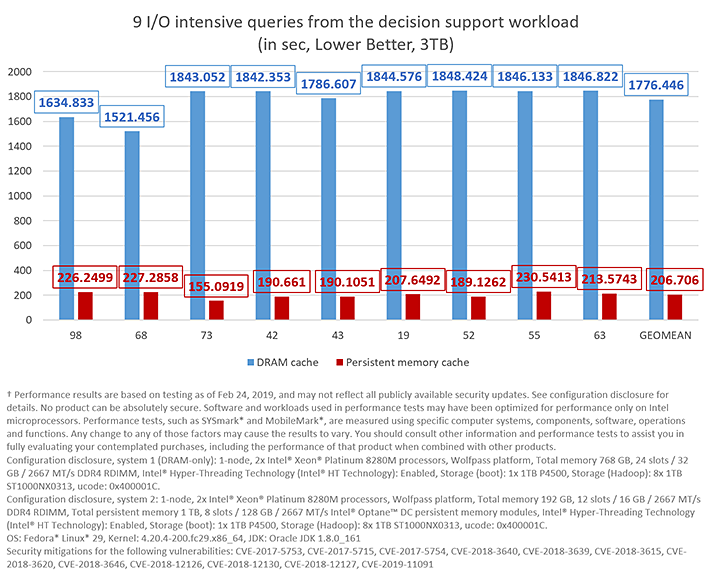 In this case, the server with persistent memory is the clear winner thanks to its extra cache capacity, giving it an 8X performance gain—on average—as compared to the DRAM-only server.

Finally, the third set of experiments test the case where 4TB Data Scale is used with a working set size (1226.7GB) that does not fit in either of the two servers’ caches. 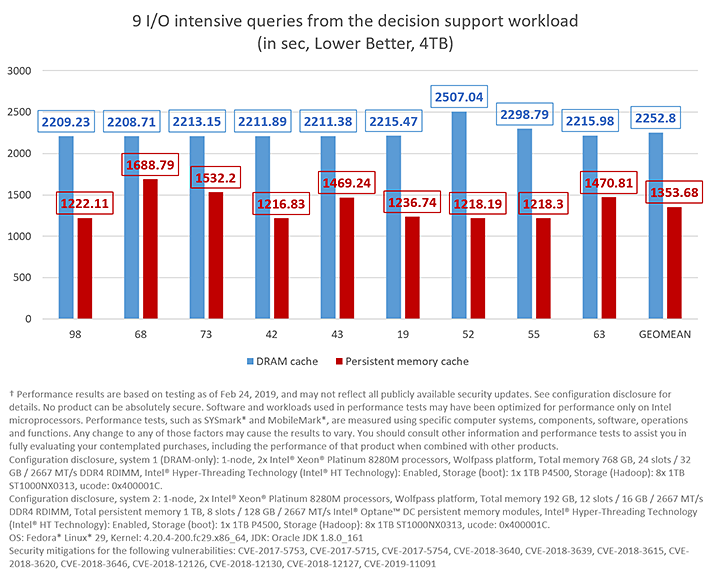 In this case, the server with persistent memory shows a 1.66X performance gain on average.

Accelerating Spark workloads to take full advantage of persistent memory is made easier thanks to vmemcache and OAP developed by Intel. Libvmemcache is an embeddable and lightweight in-memory caching solution that allows applications to efficiently use persistent memory’s large capacity in a scalable way. OAP builds upon that solution to tailor the acceleration to Spark workloads. Together, they were able to achieve impressive results for the 9 most I/O intensive queries out of the 99 queries composing the decision support workload. Both OAP and Libvmemcache are available as open-source projects on GitHub, where readers can build from source and contribute to the product development.

† Performance results are based on testing as of Feb 24, 2019, and may not reflect all publicly available security updates. See configuration disclosure for details. No product can be absolutely secure. Software and workloads used in performance tests may have been optimized for performance only on Intel microprocessors. Performance tests, such as SYSmark* and MobileMark*, are measured using specific computer systems, components, software, operations and functions. Any change to any of those factors may cause the results to vary. You should consult other information and performance tests to assist you in fully evaluating your contemplated purchases, including the performance of that product when combined with other products.

Intel, the Intel logo, Intel Optane, and Xeon are trademarks of Intel Corporation in the U.S. and/or other countries.