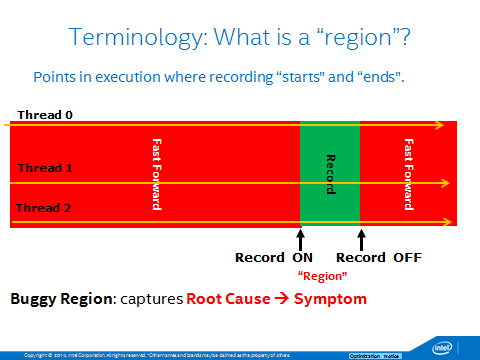 Specifying "Region of interest" for Pin and SDE based analyses

Similar use of the "CONTROL_MANAGER" in SDE can be seen in $SDE_BUILD_KIT/pinkit/sde-example/example/controller-example.cpp.

Region triggers from a pintool

A pintool can start/stop regions programmatically by calling the following CONTROL_MANAGER method:

What is the controller

The controller is a flexible powerful way for users to define a slice of execution which they want to be profiled by SDE or an SDE based tool. The tool is responsible to support the controller events, and define its behavior, regarding incoming events. See details about SDE based tools support for the controller below.

The user can define a set of alarms which will trigger the events to be fired by the controller. The tool will receive these events, and act accordingly.

The controller provides a set of predefined alarms which include:

The controller exposes a knob: "-control" which gets the actual definition in a string argument to this knob. This is a flexible way for the user to control the region being profiled by the tool.

Each instance of the "-control" knob, defines an alarm-chain as:

A full definition of the syntax, and the available alarm-types can be found below.

-control start:icount:100
The controller will fire a start event, once 100 instructions are executed.

-control stop:address:foo:count3
The controller will fire a stop event, once we reach the symbol 'foo' for the 3rd time.

By default the alarm is "armed" only once for each thread. Once the event is fired, this thread won't trigger an additional event, for this alarm. If one adds the ",repeat:<int>" to the end of the alarm, it will be activated <int> times. A repeat token without an argument means that the alarm will be fired every time it is executed.

-control start:icount:100
The controller will fire a start event, once 100 instructions are executed. No more events will be fired

Omitting the repeat count
-control start:icount:100,repeat
The controller will fire a start event, every 100 instructions that are executed.

Multiple alarms in a chain

Each instance of the "-control" knob defines, an “alarm chain” (see description below).

Alarm chain is a sequence of alarms, separated by the ',' character, where each alarm is activated only after the previous one was fired. So the ',' character applies an order between the proceeding alarm and the following alarm.

-control start:icount:100,stop:address:foo:count3,repeat:2
The controller will fire a start event for each thread which reaches icount 100. Then it will 'arm' the next alarm for that thread. So once a thread reaches the symbol foo for the 3rd time (after reaching icount 100), the controller will fire a stop event for that thread. This will be repeated twice, for each thread.

In addition, one can set the entire chain to start only after some other chain has finished, using the ",name:<name>" and the ",waitfor:<name>" syntax

In some cases, we want the event to be fired only after a certain condition. For example: we want to start event to be fired when a function foo is called from the function bar.  This can be done with the pre-condition event type. This event doesn't actually call to the tool (i.e. fires an event) but only arms the next alarm in the chain.

If the ":tid<int>" syntax is used, the preceding alarm is armed only for the thread with the defined thread ID.

If the ":global" token is used the alarm will be counted in all threads.

Going back to the example above:

-control start:icount:100
For each thread that reaches an icount of 100, the controller will fire a start event to the tool. The the event will be delivered with the tid of the triggering thread.

Adding the ":tid<int> syntax
-control start:icount:100:tid3
Only when thread with pin thread ID 3 will reach the icount of 100, the controller will fire the start event to the tool.

Adding the ":bcast" syntax, will cause the controller to specify that the event is marked with the broadcast attribute (upon the arrival of the event). The tool can use this information to decide if to profile all the threads based on this event or only the triggering thread. The effect of adding the "bcast" syntax depends on the way the tool handles this information. In Addition, an alarm defined with bcast, which is notated with the "bcast" token, will 'arm' the following alarm in the chain, for all threads.

The full definition of an alarm chain:

isa-extension: string (the instructions extension as specified by XED)

isa-category: string (the instructions category as specified by XED)

int3: no argument (the int3 instruction is not really executed)

magic: int.int (the instruction xchg ebx,ebx and input/output values are defined by the numbers)

pcontrol: string (the second argument to the MPI_Pcontrol function called by the application)

interactive: no argument (see below)

Using the address alarm with image and offset, the '+' sign is the key to distinguish between a function name and an image name. The image name can be full path or only the base name of the image.

The controller will fire the event once the alarm reaches the triggering condition. The instruction count alarm specifically works in a basic block granularity. The event will be fired at the beginning of a basic-block, when the current icount + the number of instructions within the basic-block, exceed the value defined in the controller, for triggering the event.

Some events were modified to be more accurate, and they are triggers in the specific instructions and not in the basic block: address, ssc, isa-extension, isa-category.

Please note that using the controller for specifying region of interest for tracing with pinplay has special handling. The start and stop events always act on all the threads. Due to implementation limitations, there is a small delay between the exact instruction on which the event is fired and when it is actually start or stop the region.

period: number of instructions before next sampling starts.

length: number of instructions to sample.

The alarm can be used to define multiple regions based on instruction count.

repeat[<int>]: number of iterations of the chain (when no number provided - execute in endless loop).

count<int>: delay firing the event to only the Nth execution of the alarm, the counting happens for each thread unless global is also specified.

tid<int>: the thread to monitor, events on other threads are ignored.

bcast: inform the tool that the event should be processed for all threads (this behavior is tool specific, and it is in the tool's responsibility).

name<string>: the name of the chain, other chains can “wait” for this chain to finish before it starts.

waitfor<string>: start the chain only after the chain with the specified name has finished.

global: Count alarms summary for all threads and not in a specific thread. this token cannot appear with tid token.

All analysis tools behave similarly: The tool collects data per thread. Based on an arrival of a start event triggered by that thread. The tool will stop the collections of data for that thread, when a stop event arrives for that thread. If the tool receives an event with "bcast" as the tid, rather than the triggering tid, the tool will apply this event on all threads.

These events are effective right at the point of arrival.

The tracing tool handles a global region. Meaning, at each given time, we are either in a region, and tracing all threads, or we are outside a region, and not tracing any thread.
Another special behavior of the tracing tool is the transition from in/out a region. The effect of the event arrival isn't immediate. Following is a description of what happens in the tracing tool upon an arrival of a start event:

The same goes for stopping the trace generation.
Please notice that the tracing tool ignores any event that arrives between step 1 and 4. The controller behavior is orthogonal to the way the tool handles the events. So, the controller will continue firing events based on the alarms defined by the user in the command line. The tracing tool would ignore them if a previous event arrived, and its processing hasn't been completed yet.

here are some examples of command line usage for defining the alarms/events. 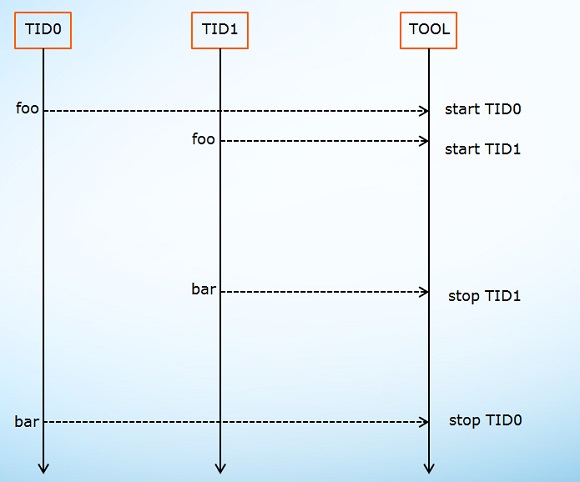 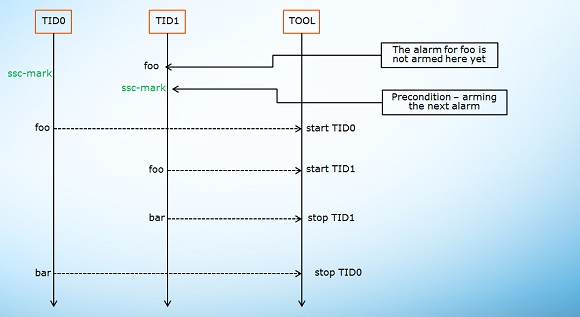 * It's the tools decision/responsibility to handle the 'bcast' differently than the default case. 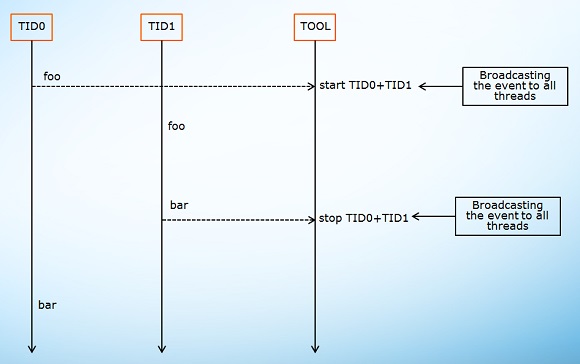 start at symbol foo, stop at symbol bar but monitor only tid0

(The controller ignores the fact the tid1 reaches the symbol foo) 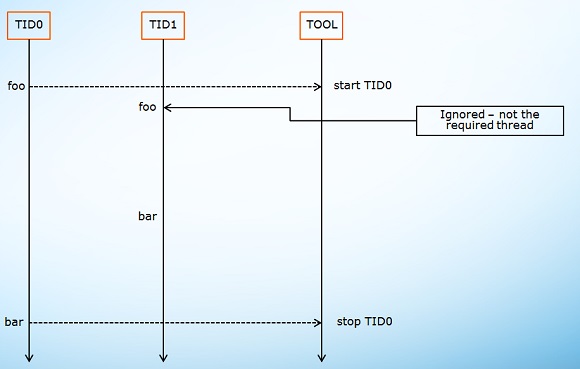 start at symbol boo only after the sequence foo,bar,foo,bar

>sde –control start:enter_func:foo,stop:exit_func:bar -- <app>
for this call sequence: A->bar->foo->C->bar
start at beginning of function foo, stop when exiting the first bar function
*for exit function event we always refer to the top most caller.