MBM is part of a larger series of technologies called Intel® Resource Director Technology (Intel® RDT). More information on the Intel RDT feature set can be found here, and an animation illustrating the key principles behind Intel RDT is posted here.

One example usage, the AppFormix Dashboard*, surrounds real-time container or virtual machine (VM) monitoring. This monitoring tool is part of a set of AppFormix orchestration tools supporting Kubernetes* containers and OpenStack* plug-ins. As shown Figure 1, this monitoring framework enables real-time tracking of memory bandwidth for running containers or VMs, allowing for instance visualization of whether an application is using reasonable amounts of shared resources such as memory bandwidth. 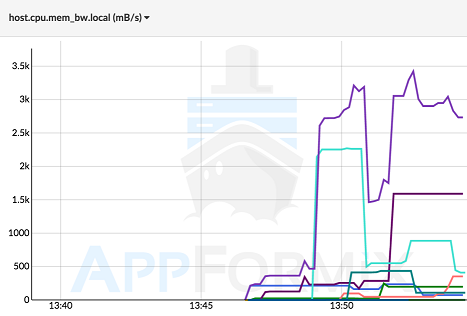 Figure 1: Data shown as a time series to enable real-time monitoring of containers or VMs. The x-axis shows time of day, and the y-axis shows memory bandwidth in MB/s. Data courtesy of AppFormix.

As MBM provides monitoring of remote memory bandwidth (via subtracting local from total) the bandwidth that applications are using to remote processors can be tracked (see Figure 2). 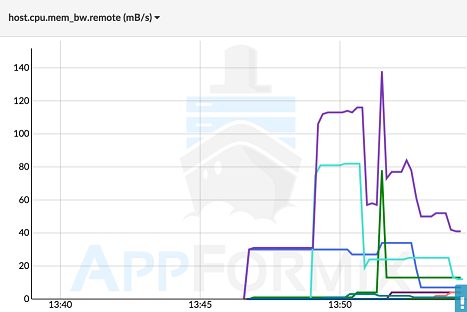 Given real-time monitoring data, operators can make faster decisions about which VMs or containers need more resources to achieve a given level of performance, and it becomes more straightforward to detect “noisy neighbors” which may slow down other VMs or containers.

Figure 3: An example bandwidth-sensitive application with performance shown as a function of memory bandwidth available. Through the combination of MBM and application performance metrics, such plots can be used to understand the characteristics of an application, which can also be combined with Cache Monitoring Technology data for a deeper understanding. Performance debug usages are also possible. As application characteristics can vary, the figure is for illustrative purposes only.

Another important usage is to enhance cross-socket scheduling in NUMA-aware systems. This topic is discussed in the next blog in the series on proof points.

More specific feature details on the capabilities and event codes provided by MBM are provided in the Intel Software Developer’s Manual.

MBM provides real-time data on bandwidth usage per thread, application, VM, container or any combination (given proper software support). Longer-term, these metrics can be provided to higher-level software including orchestration frameworks, enabling automated characterization and resource-aware scheduling usages. The next blog in the series provides additional examples and proof points.