IP multicast is a method of sending network packets to a group of interested receivers in a single transmission. This article provides information about multicast support in Open vSwitch* (OvS) and how to configure it.

The following two protocols are widely used for multicast support in any network topology:

A simple multicast network architecture using PIM and IGMP looks something like the following:

Video is streamed from the video server to all of the multicast subscribed clients with the help of PIM and IGMP. PIM is used for tracking multicast traffic between LANs. IGMP protocol is operated between hosts and a local multicast router in a single LAN. IGMP messages are exchanged between the router and hosts to query, join, or leave a multicast group. OvS featuring IGMP snooping in a network collects useful information from these IGMP message exchanges. The implementation details of PIM and IGMP protocols are out of scope of this document as we are only covering how OvS is handling IGMP messages and multicast traffic in a deployment.

At the time of writing, OvS can only support IGMP snooping, as it is primarily used as an L2 virtual switch in a network. An IGMP snooping switch doesn’t generate or respond to any multicast messages; instead it passively snoops on IGMP query, report, and leave (IGMP version 2) messages transferred between IP multicast routers/switches and IP multicast hosts to determine the multicast group membership. 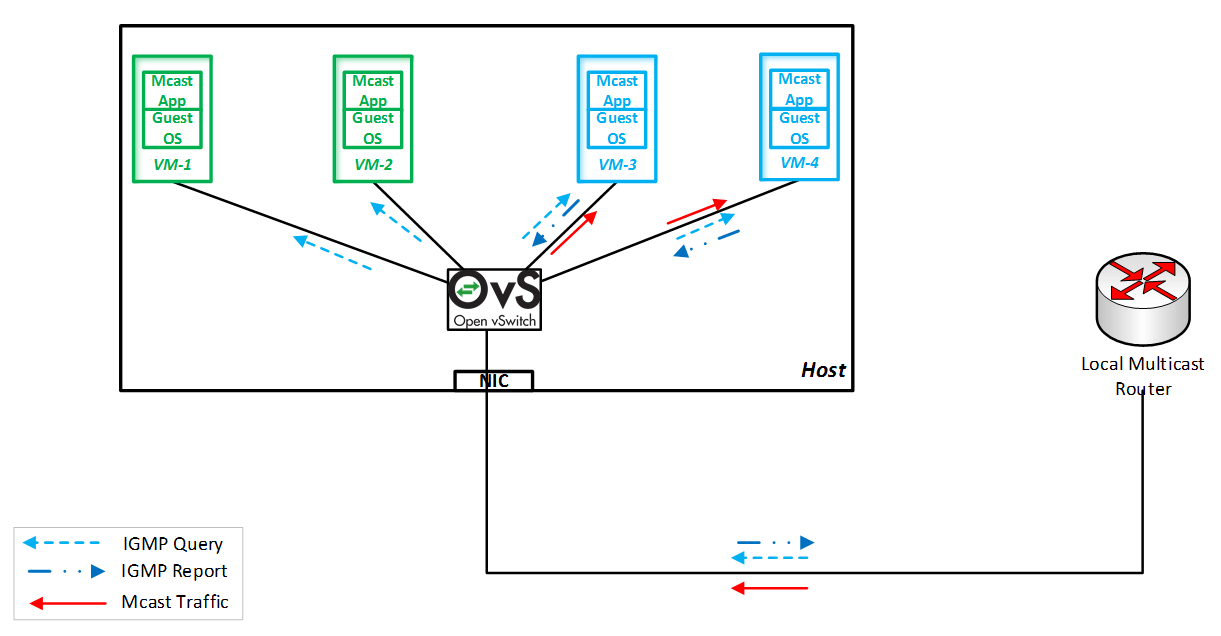 Consider the example shown in Figure 2, where OvS is enabled with IGMP snooping. OvS is connected to four virtual machines (VMs) in the same machine and an external multicast router. Two multicast groups are configured in this test setup:

Let’s look at the message communication between router and VMs for the multicast group Blue.

IGMP snooping is supported for both the OvS kernel and DPDK data paths. To make multicast snooping work properly, IGMP and multicast packets must hit the OvS flow with action NORMAL.

To enable IGMP snooping on an OvS bridge “br0”:

Similarly, to disable the multicast snooping:

To list the learned multicast table entries on a bridge “br0”:

Also, the user can flush out all the learned multicast entries on a bridge “br0” with:

In this article we discussed multicast support in OvS and how to configure it. OvS can support only IGMP snooping which is an optimization for layer-3 IGMP. IGMP snooping allows OvS to forward multicast traffic to the links that have solicited them.

Sugesh Chandran is a network software engineer with Intel. His work is primarily focused on accelerated software switching solutions in user space running on Intel® architecture. His contributions to OvS with DPDK are mainly focused on hardware acceleration enablement and tunneling.