The DPDK Packet Framework library was first introduced in DPDK v2.1 along with a reference application known as ip_pipeline. In subsequent releases, various features were added to the ip_pipeline application to transform it into a toolbox for developing complex packet processing workloads such as edge routers. The information here applies to DPDK versions 16.04 and above.

Each pipeline module is constructed of three primitive entities: input ports, output ports, and tables. An example is shown in Figure 1.

The IP Pipeline application is designed to demonstrate the use of the DPDK Packet Framework tool suite. This sample application, in the DPDK codebase, provides the following data plane functions implemented using the above pipeline model.

Theses pipelines can be seen as prefabricated blocks that can be instantiated and interconnected by means of a configuration file to create complete applications.

The application command-line arguments are:

The usage of the pipeline blocks is demonstrated by means of several sample applications and configuration files that are provided with the ip_pipeline application.

Figure 2 shows one such configuration file for a Layer 3 (L3) forwarding application. 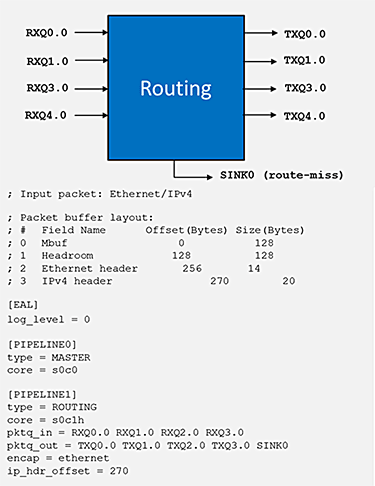 In the file, the [PIPELINE] section defines various parameters of the pipeline. In this particular case it sets up simple routing.

The "pktq_in" and "pktq_out" parameters define the packet transfer interface; in this case, to receive and send packets.

The "encap" parameter can be set to "ethernet", "qinq", or "mpls" to encapsulate all outgoing packets with the appropriate header.

The last parameter, "ip_hdr_offset", is used to set the offset bytes needed to offset to the start of the ip-header in the DPDK packet structure (mbuf).

Figure 3 shows the ip_pipeline script file with routing rules added to the LPM table of the routing pipeline. Entries in this file are related to the case where the "encap" field is set to "ethernet" and the fast path ARP is disabled.

The rules in the script file have the following format:

Use the following command to run the L3 forwarding application:

Sometimes applications can have complex topologies in terms of interconnections between different functional blocks. In these cases it can becomes difficult to understand the application packet processing flow by simply looking at its configuration file. In order to help with this a Python* program called diagram‑generator.py has been provided to create visual diagrams of the application topology from the configuration file.

Once the application configuration file is ready, run the command shown below to generate the diagram.

Figure 4 shows a section of a generated topology for a complex ip_pipeline application. 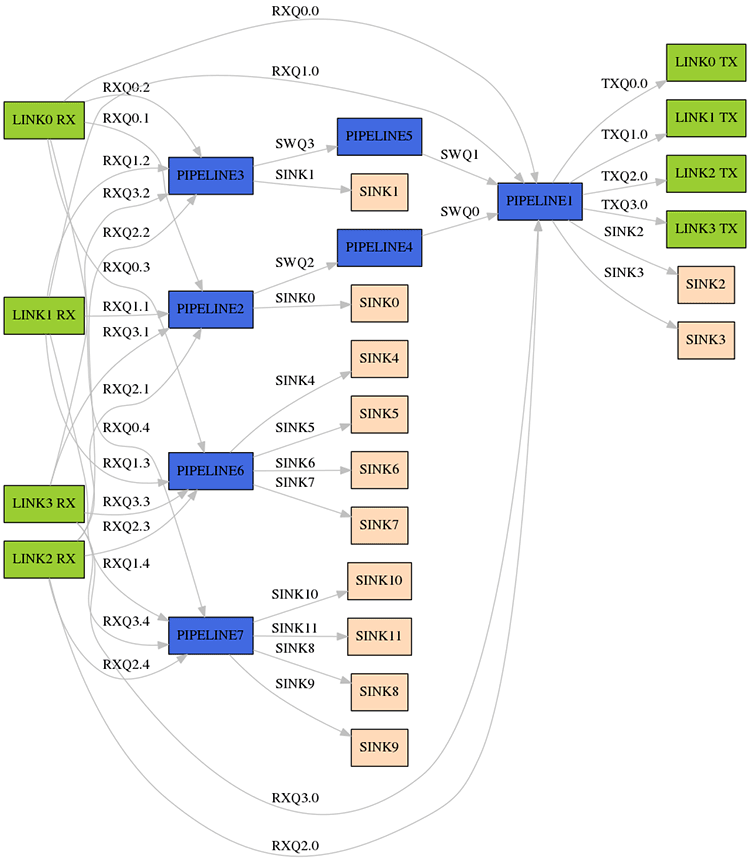 Figure 4: Section of a generated topology for a complex ip_pipeline application.

The various network functions (pipelines) constructed using this standard pipeline model are available as part of the DPDK ip_pipeline sample application. Although some of these are simple examples, a straightforward configuration file can build realistic applications. This article presents the commands to visualize and run the applications.

Check out the DPDK Programmer's Guide for a full description of the DPDK Packet Framework design.

Jasvinder Singh is a network software engineer with Intel. His work is primarily focused on development of data plane functions and libraries for DPDK. His contributions include packet framework enhancements and the ip_pipeline sample application.