This web-based training class is designed for software developers who wish to learn the fundamentals of building Intel® SGX applications. Through a series of videos, sample code, and lab exercises, the developer will learn key concepts around the Intel SGX technology and writing Intel SGX application development. Developers will learn how to:

This course was developed in conjunction with Prowess* Consulting.

To get the most out of the class, software developers will require:

Each part of the course covers a separate topic in Intel SGX application development, and most include labs. The Intel SGX Web Training Hands-on Lab Manual will step you through the various exercises.

Intel SGX protects an application’s secrets from malicious software by creating isolated memory regions of code and data called enclaves. These non-addressable memory pages are reserved from the system’s physical RAM and then encrypted, allowing the application to access its secrets without fear of exposure. With Intel SGX, secrets remain secret even if the application, Operating System, BIOS, or VMM are compromised

Intel SGX applications are built a trusted part, and and untrusted part. When the application needs to work with a secret, it creates an enclave which is placed in trusted memory. It then calls a trusted function to enter the enclave, where it is given a view of its secrets in clear text. 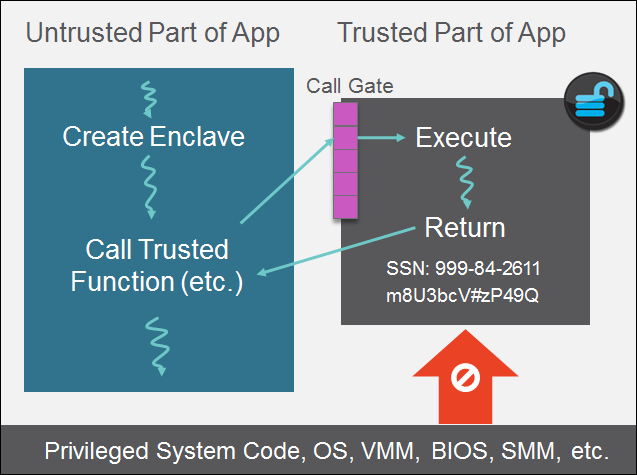 All other attempts to access enclave memory from outside the enclave are denied by the processor, even those made by privileged users. This prevents secrets in the enclave from being exposed.

Before an application can use Intel SGX, four conditions have to be met:

This means that Intel SGX may not be available for use by applications even if it’s supported by the CPU. Applications, and application installers, need to be able to detect Intel SGX availability at run time, and take appropriate action based on the system’s configuration.

The video below explains the application detection procedures in greater detail.

The exercises in Task 1 of the Intel SGX Web Training Hands-on Lab Manual provide an overview of the Intel SGX components, system configuration, and feature detection. They also demonstrate why secrets should never be statically compiled into enclaves.

Intel SGX applications are built with two parts: the trusted part, and the untrusted part.

The exercises in Task 2 of the Intel SGX Web Training Hands-on Lab Manual step through creating a simple "Hello World" enclave application in Microsoft Visual Studio. This application is not designed to show off the security features of Intel SGX. It's purpose is to introduce developers to the process of setting up an enclave project, and making a simple call into the enclave.

Several of the lab exercises from this point on consist of making code changes to a sample Intel SGX application called the File Encrypter. This is a very simple program that encrypts and decrypts files using a password that you provide. The application's user interface is written in C#, and it uses C++/CLI to get to native Win32 code so that it can call into the enclave. The majority of the code for this application has already been written, but you'll be adding ECALL and OCALL definitions, as well as implementing some of the code that links the untrusted application to the enclave.

Warning: The File Encrypter is a sample application with minimal error handling, created for training purposes only. It is not robust enough for general use as a security application. You should only use it in this training class, and you should never use it to encrypt critical files. 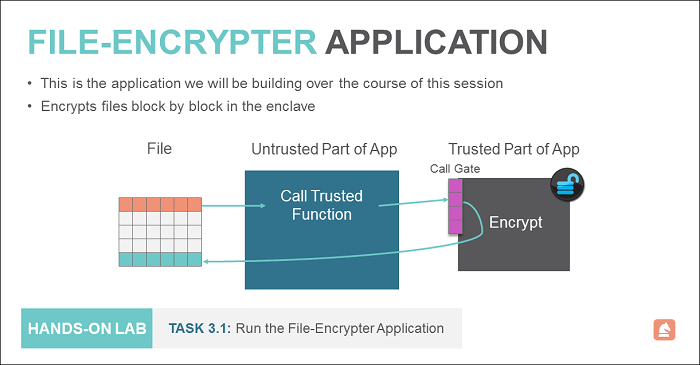 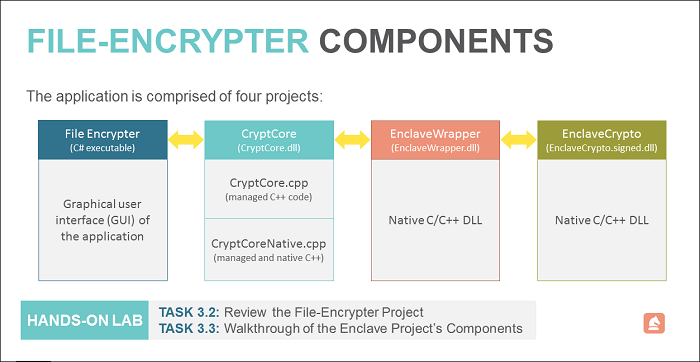 The exercises in Task 3 of the Intel SGX Web Training Hands-on Lab Manual are designed to get you familiar with the File Encrypter project and its source code.

The fundamental protection provided by Intel SGX is that an enclave’s secrets can only be accessed by the code that is inside the enclave. The only way to execute that code is through the interface functions that the enclave developer has created. The CPU enforces this restriction, and even privileged users can’t circumvent it

Each enclave defines one or more Enclave Calls, or ECALLS, which are the entry points into the enclave from the untrusted application. An enclave may also have Outside Calls, or OCALLS, which allow enclave functions to call out to the untrusted application and then return to the enclave. These ECALLs and OCALLs make up an enclave’s interface, which is defined in the encave's EDL file. EDL stands for Enclave Definition Language. An EDL file loosely resembles a C-style header file with function prototypes, and in fact shares much of that syntax.

The video explains the basics of EDL, such as passing parameters into and out of enclaves, both by value and by reference.

In Task 4 of the Intel SGX Web Training Hands-on Lab Manual, you'll be adding code to the sample File Encrypter application. You'll fill in the EDL file, and add the ECALLs to the EnclaveWrapper project. The lab document will step you through what needs to be done, and the sections of code that you will modify are clearly indicated in comment blocks. The comments will tell you what you need to know to implement the missing code.

The Enclave Definition Language allows you to marshal data buffers in and out of your ECALLs and OCALLs. Sometimes, however, you need to provide additional information when passing pointers as parameters. There are also situations where you need direct control over how the pointers are handled.

The video discusses some of the advanced feartures of EDL, such as passing void pointers, raw pointers addresses, and specifying ECALLs that can only be called from within an OCALL.

In Task 5 of the Intel SGX Web Training Hands-on Lab Manual, you'll be using some of the advanced features of EDL to pass raw pointers into the enclave. You'll also implement an OCALL that demonstrates a technique for calling back to managed code.

Intel SGX enclaves can be built in debug mode or in release mode.

Debugging an Intel SGX enclave requires the use of special CPU instructions, and that means you must use the Intel SGX debugger that is included with the Intel SGX Software Development Kit. Debuggers without Intel SGX will simply skip over enclave code.

When developing a managed application, such as one written in C#, you can’t run the Intel SGX debugger directly from within Visual Studio. Managed applications must be debugged by attaching to the running process.

The video shows the use of hte debugger on life applications, and discusses some of the nuances of using the Intel SGX debugger in detail.

In Task 6 of the Intel SGX Web Training Hands-on Lab Manual, you'll use the debugger on a small, native Intel SGX application.

To preserve the information that’s stored in an enclave, you must explicitly send it outside the enclave to untrusted memory. Intel SGX provides a capability called data sealing which encrypts enclave data in the enclave using an encryption key that is derived from the CPU. This encrypted data block, also called the sealed data, can only be decrypted, or unsealed, on the same system (and, typically, in the exact same enclave) where it was created. The encryption itself provides assurances of confidentiality, integrity, and authenticity on the data.

There is an important caveat with data sealing that can have significant security implications: enclaves do not authenticate the untrusted application. You must not assume that only your application will load your enclave, or that your ECALLs will be invoked in a specific order. Anyone can load your enclave and execute its ECALLs in any order they choose. Your enclave’s API must not allow the sealing and unsealing capability to leak secrets, or grant unauthorized access to them.

The video discusses data sealing in detail, and explains the difference between the two sealing policies: MRENCLAVE and MRSIGNER.

In Task 7 of the Intel SGX Web Training Hands-on Lab Manual, we return to the File Encrypter sample application. You'll modify the enclave to use data sealing on the password so it can be safely sent to unprotected memory. This allows the enclave to effectively preserve the password across power events.