This tutorial shows how to use two powerful features of OpenCL™ 2.0: enqueue_kernel functions that allow you to enqueue kernels from the device and work_group_scan_exclusive_add and work_group_scan_inclusive_add, two of a new set of work-group functions that were added to OpenCL 2.0 to facilitate scan and reduce operations across work-items of a work-group. This tutorial demonstrates these features on our very own GPU-Quicksort implementation in OpenCL, which, as far as we know, is the first known implementation of that algorithm in OpenCL. The tutorial shows an important design pattern of enqueueing kernels of NDRange of size 1 to perform housekeeping and scheduling operations previously reserved for the CPU.

A Brief History of Quicksort

Quicksort is an algorithm invented by C.A.R. (“Tony”) Hoare in 1960 while at Moscow State University. Tony Hoare was a graduate student studying Probability Theory under Professor A.N. Kolmogorov. Hoare learned Russian while in the Royal Navy where his uncle was a captain. Hoare was trying to sort words of each incoming Russian sentence into ascending order while working on problems of machine translation of languages. The basic idea of the Quicksort algorithm is to partition the sequence to be sorted around the pivot element, which could be selected from the sequence in a number of different ways, where all the elements less than the pivot are placed on the left hand side of the array, all the elements greater than the pivot are placed on the right hand side of the array, and all the elements that are equal to the pivot are placed in the middle of the array. After the array has been partitioned, the quicksort algorithm is reapplied to both the left hand side and the right hand side of the sequence.

Figure 1. Partitioning the sequence in Quicksort

A Brief Introduction to GPU-Quicksort

The first known quicksort algorithm for the GPUs was developed and described by Shubhabrata Sengupta, Mark Harris, Yao Zhang, and John D. Owens in their paper "Scan Primitives for GPU Computing". The algorithm that we are presenting here, GPU-Quicksort, was first described by Daniel Cederman and Philippas Tsigas in their paper “GPU-Quicksort: A practical Quicksort algorithm for graphics processors” and was an improvement on the first quicksort on the GPU. While originally written in CUDA* to run on Nvidia* discrete graphics cards, the algorithm is easily implementable in OpenCL to run on any hardware that supports the OpenCL API. The algorithm was specifically designed to take advantage of the high GPU bandwidth and runs well on both OpenCL 1.2 (Intel® HD Graphics 4600) and OpenCL 2.0 drivers (Intel® HD Graphics 4600 and Intel® HD Graphics 5300 or above). For an excellent overview of the GPU-Quicksort, see Section 3.1 of the Cederman and Tsigas paper.

As the original Quicksort, GPU-Quicksort recursively partitions the sequence of elements around the pivot until the entire sequence is sorted. Since the algorithm is written for the GPU, it consists of two phases, where in the first phase several work-groups work on different parts of the same sequence until subsequences are small enough to be fully sorted by each work-group in the second phase. 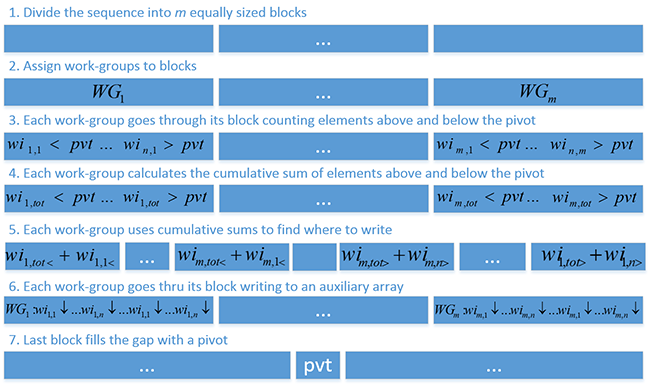 Figure 2. Partitioning the sequence in GPU-Quicksort

The GPU-Quicksort implementation requires barriers and atomic functions that are available in OpenCL 1.2 and are supported by practically all modern hardware capable of running OpenCL 1.2. Specifically, atomic_add, atomic_sub, and atomic_dec are used in implementing gqsort_kernel. Barriers are used extensively in both gqsort_kernel and lqsort_kernel.

The disadvantages of using OpenCL 1.2 are:

All three of these disadvantages are addressed in our OpenCL 2.0 conversion. You will see that by addressing these shortcomings, the performance of the algorithm improved significantly.

In this section we will review the changes made to transform the OpenCL 1.2 implementation to an OpenCL 2.0 implementation that takes advantage of the new device-side enqueue and work-group scan functions.

Work-group functions can improve performance and readability of code in OpenCL C
The first and easiest step of converting GPU-Quicksort to OpenCL 2.0 is to take advantage of the readily available work-group scan functions: specifically, use work_group_scan_inclusive_add and work_group_scan_exclusive_add functions in both gqsort_kernel and lqsort_kernel. We not only get some measurable performance benefits (~8%), but we gain in code conciseness, maintainability, and clarity reducing the code size associated with prefix sum calculations almost 3X.

Note that relauncher_kernel is launched on only a single work-item (ndrange = 1). Isolating the relauncher logic from the qsort_kernel significantly simplified the qsort_kernel and had the added benefit of improving the performance of the algorithm.

A couple of points about the way we enqueue relauncher_kernel: we use a new feature introduced in OpenCL 2.0—blocks. Since the kernels do not require local memory arguments, we use blocks of type void (^) (void). Blocks are similar to C++ lambdas, but have a different syntax. The block captures the parameters passed into it and therefore avoids the painful job of setting the arguments for the kernel via clSetKernelArg equivalent. A second point worth mentioning is the way num_workgroups is calculated outside the block and then passed into it. Note that in the code example above the num_workgroups will be captured by value, which is exactly what we want. If we used get_num_groups(0) directly instead of num_workgroups, it would have been called after the block containing relauncher_kernel call was enqueued and executed, so the value passed to relauncher_kernel would have been 1, instead of the number of work-groups of the gqsort_kernel. For more information on the block syntax used by OpenCL C, see the OpenCL C specification [3].

Once we launch the first relauncher_kernel from the CPU, subsequent kernel launches are all performed from the GPU. After all the input data is fully sorted, control is returned to the CPU. 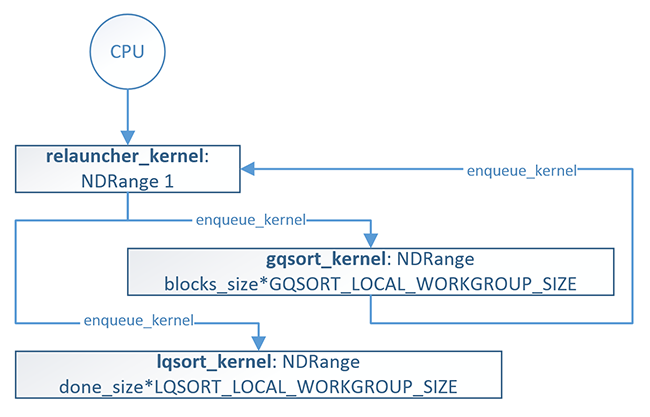 Building and running this tutorial requires a PC that meets the following requirements:

The tutorial is a console application that generates an array of size Width*Height of random unsigned integers. It then proceeds to sort the copies of that array using std::sort, regular single-threaded quicksort, followed by a number of iterations of sorting with GPU-Quicksort in OpenCL 2.0.  The tutorial supports a few command-line options:

An Intel processor with Intel® HD graphics 5300 or above is a complex piece of hardware, but when coupled with the OpenCL 2.0 capable driver, can bring dramatic performance improvements to your OpenCL code. OpenCL 2.0 provides a number of powerful features to the GPGPU programmer. We covered just two of these features: enqueue_kernel function and work_group_scan_exclusive_add and work_group_scan_inclusive_add functions, and showed that they bring dramatic performance improvements at a relatively small cost, while simplifying and increasing readability of your code. Please consider reading other Intel tutorials on other OpenCL features at Intel® SDK for OpenCL™ Applications Support website.

Robert Ioffe is a Technical Consulting Engineer at Intel’s Software and Solutions Group. He is an expert in OpenCL programming and OpenCL workload optimization on Intel Iris and Intel Iris Pro Graphics with deep knowledge of Intel Graphics Hardware. He was heavily involved in Khronos standards work, focusing on prototyping the latest features and making sure they can run well on Intel architecture. Most recently he has been working on prototyping Nested Parallelism (enqueue_kernel functions) feature of OpenCL 2.0 and wrote a number of samples that demonstrate Nested Parallelism functionality, including GPU-Quicksort for OpenCL 2.0. He also recorded and released two Optimizing Simple OpenCL Kernels videos and is in the process of recording a third video on Nested Parallelism.