Designing for the Internet of Things is challenging. The technology is rapidly changing, and architecting for these situations can be complex. This article will discuss both design considerations for IoT and new methods in creating a robust network using Intel® processors.

Design practices for Internet of Things (IoT) devices are changing. It used to be that developers just watched processes from afar, but now we control them in real-time. A result of this change has been an increase in IoT network complexity. For IoT devices that depend on Internet access, this can result in several challenges when it comes to network paths to cloud servers: high latencies, low bandwidths, and decreased reliability.

These trends have led to new topologies in IoT networks, such as Fog Computing (a network layer below the cloud). Deploying cloud elements closer to the edge of the network (or even onsite) reduces latencies while also preventing bandwidth bottlenecks. In order to achieve these goals, edge networks and Fog Computing require high-performance computing resources, as well as high-speed storage and networking.

The challenge for IoT is twofold:

Intel supplies a wide range of processor products that allow IoT designers to scale both hardware and software to meet these design goals (flexible, scalable, and reliable). Many of these processor families also have integrated GPUs which offers extra processing resources.

There are four main product families: 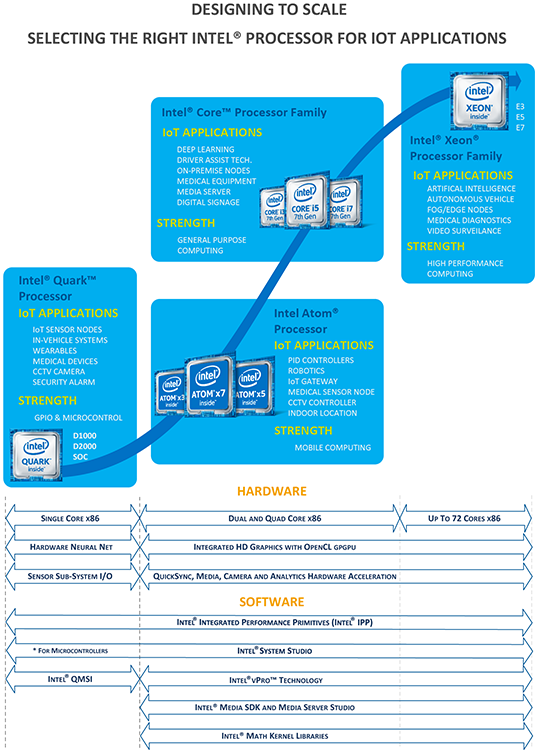 Early big data architectures were based on sensors with networking capabilities. These accessed the Internet and transmitted data into cloud applications for later retrieval and analysis.

Current IoT architectures evolved into networks that either forward data in near real-time (to generate event-based responses) or function as sensor-actor networks.

Sensors are devices that detect or measure a physical property (temperature, humidity, light, etc.). Controllers receive input from sensors and initiate actions. These actions usually include using an actor or actuator to adjust or maintain desired outputs of specific processes. Let's consider, for example, a plant watering system based on sensors. The moisture sensor measures the water saturation of soil, and if that level falls below a certain threshold, a controller initiates an action to open a water valve. 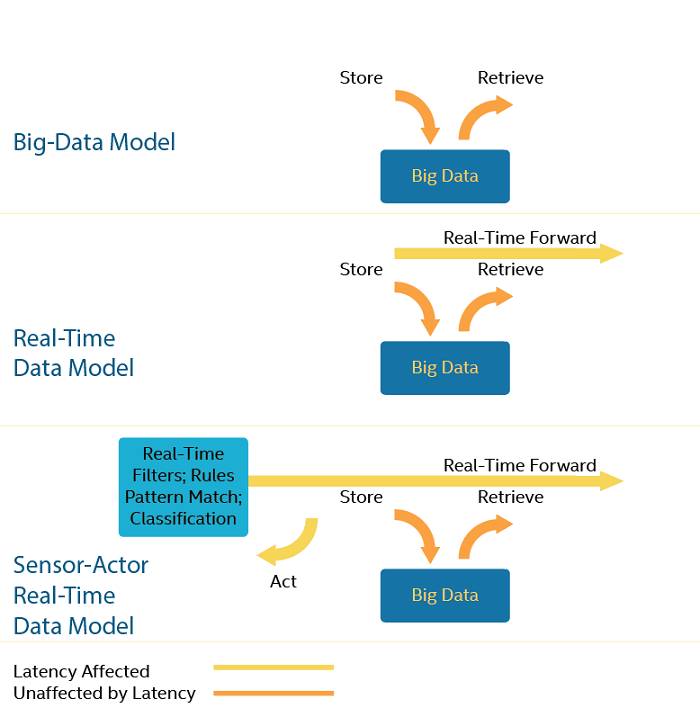 As IoT evolves and more sophisticated applications are designed, the entire end-to-end IoT chain will need even more computing resources, while still requiring power consumption optimization. This need for processing power is constantly growing, meaning that designers need to account for some extra headroom for future software upgrades.

Migrating the cloud elements to the edge network or to the LAN (Figure 3) reduces network latencies accordingly. The real-time data path to the ON-PREMISES DATACENTER bypasses the access network, and results in the bandwidth and reliability benefits of LAN. 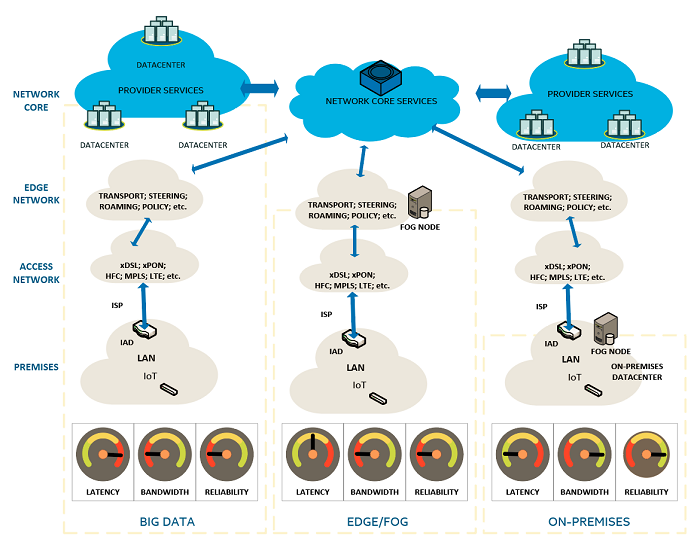 An increase in network complexity, along with a growing demand for IoT, have resulted in the exponential growth of complex networks stacks. Now network stacks not only need to worry about IoT protocols, they also must account for security, encryption, and independent processors that handle additional tasks.

When planning architecture for an IoT network, it’s important to consider the downstream processing of the network. Let's consider, for example, a smart building where a sensor is linked to a lighting appliance. The appliance may be part of a larger building application. The smart building may also be part of a smart city network. In this case, you would want to consider that data is not only being passed locally, but also being transferred to a larger building network, and ultimately to a much larger city network.

As sensors grow in complexity and their implementation becomes widespread, it’s important to ensure processors account for additional demands (i.e., not only network connectivity). Increasingly large data sets are now communicating with sensors. Digital sensors that use GPIO or analog connections now have large volumes of data to run and manage in real-time. It’s important to scale independent microcontroller and bus interfaces in system designs to meet application demands. For example, Fog Node or edge computing will be needed as LIDAR, radar, ultrasound, and video(vision) sensors are added in order to keep up with real-time computing applications.

Autonomous control and adaptive learning control systems should be accounted for in current or future IoT system designs. Implementation of autonomous systems is becoming more widespread. Being able to scale a design for future use is just as advantageous as offering the solution in your design as emerging technologies continue to progress. Smart homes, connected cars, artificial intelligence, and embedded deep learning are coming soon to the marketplace.

IoT Power and Performance with an Intel® Processor Family

Intel offers four families of processors that make achieving low latency, high bandwidth and increased reliability possible, all without increasing power consumption or affecting performance. The Internet of Things is a fast-growing, and complex system with many design considerations, such as latency issues, or ISP bottlenecks. These both can be rectified with with Intel® processors. Moving big data computing to the edge (and within LAN Fog Nodes) increases onsite computing resources, sensor capability, frees up bandwidth and increases reliability in IoT networks.