The PCOMMIT instruction has been deprecated.  Although it was documented earlier, Intel has dropped it from consideration for future products.  This blog post explains the details behind that decision.

In preparation for the emerging persistent memory technologies, like Intel DIMMs based on 3D XPoint™ technology, Intel has defined several new instructions to enable the persistent memory programming model.  First, there are two new optimized cache flushing instructions, CLWB and CLFLUSHOPT.  These instructions are described in the Intel Architecture Instruction Set Extensions Programming Reference and are slated to appear on various platforms, including those supporting the Intel DIMM.  They provide a high performance method to flush stores from the CPU cache to the persistence domain, a term used to describe that portion of a platform’s data path where stores are power-fail safe.

The picture below illustrates the data path taken by a store (MOV) to persistent memory. 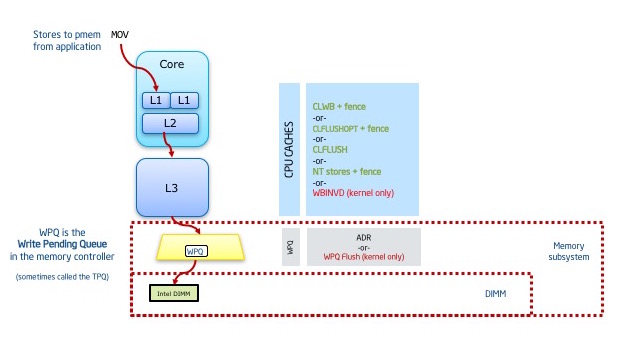 As shown above, when an application executes a MOV instruction, the store typically ends up in the CPU caches.  Instructions like CLWB can be used to flush the store from the CPU cache.  At that point, the store may spend some amount of time in the write pending queue (WPQ) in the memory controller.  As shown above, the larger dashed box represents the power-fail safe persistence domain on a platform that is designed to flush the WPQ automatically on power-fail or shutdown.  One such platform-level feature to perform this flushing is called Asynchronous DRAM Refresh, or ADR.

When the persistent memory programming model was first designed, there was a concern that ADR was a rarely-available platform feature so the PCOMMIT instruction was added to ensure there was a way to achieve persistence on machines without ADR (platforms where the persistence domain is the smaller dashed box in the picture above).  However, it turns out that platforms planning to support the Intel DIMM are also planning to support ADR, so the need for PCOMMIT is now gone.  The result is a simpler, single programming model where the application need not contain logic for detecting whether PCOMMIT is required.  For this reason, PCOMMIT is being deprecated before ever shipping on an Intel CPU, removing any need to support the instruction in older software since no software could have contained it (the opcode has always produced an invalid opcode exception and will continue to do so).

As shown in the picture above, a platform may still have a way to flush the WPQ (shown as WPQ Flush above).  Unlike the PCOMMIT instruction, this is a kernel-only facility used to flush commands written to DIMM command registers, or used by the kernel in the rare case where it wants to ensure something is immediately flushed to the DIMM.  The application is typically unaware the WPQ Flush mechanism exists.

The picture below shows a sample instruction sequence for storing values (10 and 20) to persistent memory locations. 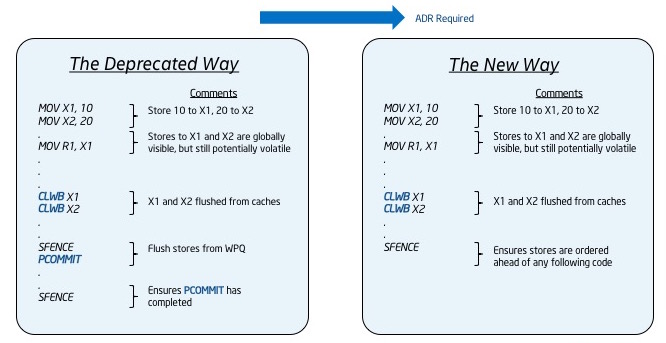 The sequence on the left was required on platforms that did not have the ADR feature to flush the WPQ on power-fail/shutdown.  Since ADR is now a requirement for persistent memory support, the simpler sequence on the right can be used for all platforms.

To prepare for persistent memory programming, some operating systems, compilers, assemblers, and libraries were modified to use the PCOMMIT instruction.  Since the instruction was not guaranteed to exist on a given platform, any software using PCOMMIT would only do so if the appropriate CPUID flag indicated PCOMMIT was supported (the exact flag is CPUID.(EAX=07H, ECX=0H):EBX, bit 22).  Since PCOMMIT is deprecated, that CPUID flag is now reserved to always be zero, rendering any code using PCOMMIT to be dead code that will never be executed.

The harmless dead code can be removed over time, but as of this writing, all known operating systems supporting persistent memory and the Non-Volatile Memory Libraries (NVML) at http://pmem.io have already been updated to remove all uses of PCOMMIT.

The programming model for persistent memory on Intel CPUs has been simplified by deprecating the PCOMMIT instruction before its first implementation.  Most software, including the Non-Volatile Memory Libraries at http://pmem.io are already updated to reflect this change.