The gaming industry is disrupted by games hosted in the cloud and edge. The nimbler players have an opportunity to grow their business faster. The total solution requires a best-in-class software stack, the best CPU, the best GPU, and the whole stack integrated and optimized for the game streaming use cases. Intel provides an Android* platform cloud gaming software solution optimized for Intel® CPUs and GPUs. This blog lays out the opportunity for the Android platform ecosystem in the gaming industry and the Intel value proposition for the cloud gaming ecosystem.

Cloud gaming is transforming the gaming business in an unprecedented manner. Several technology players including cloud service providers, telecommunications companies, independent software vendors, original equipment manufacturers (OEM), and semiconductor vendors are trying to establish themselves in this evolving technology segment. Mobile cloud gaming, that is games streamed from the cloud to mobile devices, is the fastest growing subsegment, with adoption of 5G acting as a catalyst. We are also seeing significant increases in mobile-first games being migrated to the cloud and edge, as is. Most mobile-first games have been developed for the Android platform and this trend of migrating mobile gaming workloads to cloud and edge is driving the adoption of an Android platform system software stack in cloud and edge deployments. From a semiconductor technologies perspective, while the Android platform on mobile devices has predominantly been a market for Arm* architecture, the migration of an Android platform system stack to cloud and edge is establishing Intel® architecture as the key semiconductor technology to be adopted for the Android platform. Cloud gaming is a workload that is dependent on graphics rendering and media offload and thus an opportunity for general-purpose GPUs. To achieve the best density for such workloads, the industry needs the best-in-class software stack, the best CPU, the best GPU, and the whole stack integrated and optimized for the game streaming use cases, end-to-end.

Intel has invested in the Android platform cloud gaming stack for more than two years, with the idea of using the largest games and applications from the Android platform ecosystem. We have converted the Android Open Source Project to cloud by integrating it with container runtimes and introduced software layers that allow for aggregation, orchestration, and coordination across multiple Android platform cloud containers. A key ingredient of the software stack is Intel® Bridge Technology (Intel® BT), which is a runtime post compiler that enables applications that are based on the Android platform with built-in libraries not compiled for x86 to run on x86 platforms. Intel BT eases the transition of these applications to x86 while giving customers greater choice. For more information, contact your Intel representative. The end-to-end stack is optimized for Intel® Xeon® processors and Intel® Data Center GPUs, inclusive of render and media offloads to yield high densities and low latencies. The solution ensures zero copy across render, encode, and Linux* kernels to reduce latency. 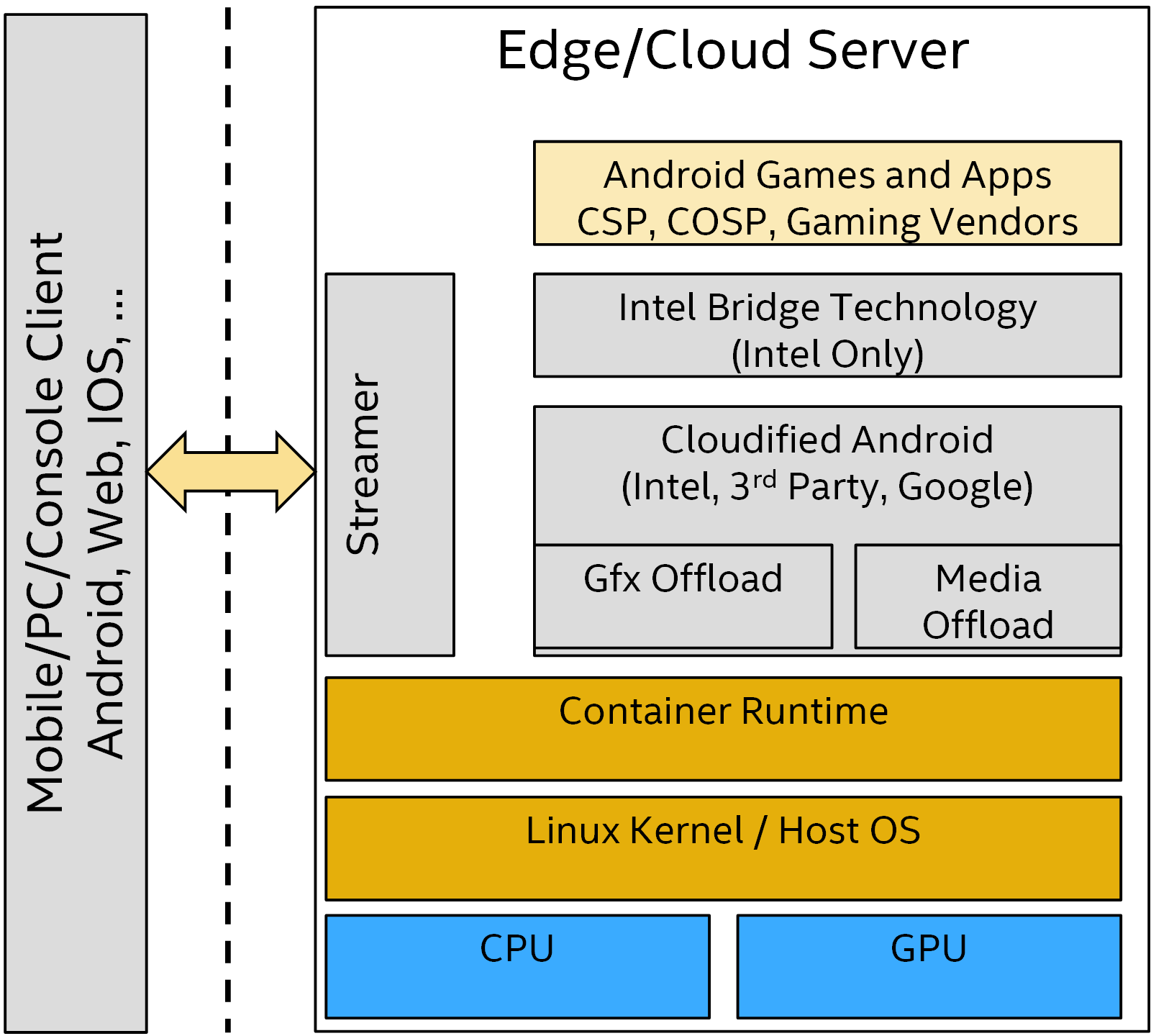 The media service is built around transport and content adaptive encoding (TCAE) technology to optimize the hardware encoding parameters and guarantee the latency within an acceptable threshold in a varying and especially weak network environment. The TCAE is based on reinforcement learning and weighted linear regression AI algorithms. It uses estimation information for network bandwidth from WebRTC streaming modules and client feedback of packet size and latency, to provide encoding parameters for the next frame, such as bitstream size, frame type, resolution and frames per second (FPS), and more.

Streaming with super-resolution imaging can improve the visual quality when the network bandwidth is limited. The downscaling is done before the encoding on the server side. The super resolution, which is an AI-based upscaling technology on client side, can compensate for the quality loss due to downscaling and restore the content to its original resolution with more details.

We are working with our cloud service provider (CSP) and telecommunication customers to enable various applications, such as heavy games, casual games, educational applications, video streaming applications, virtual reality (VR) and mixed reality (MR) applications, and others. Every type of application exhibits different characterizations. Some are CPU heavy, some are render heavy, while others are media heavy. Our software with Intel® Xeon® CPUs and dGPUs from Intel can provide fine-tuned, flexible solutions to maximize density and user experience.

We continue to optimize our stack for further performance gains. Here are a few examples.

We have removed several unnecessary system components from the Android Open Source Project for cloud use while not breaking application compatibility. As a handheld operating system, Android is a complicated system that is hard to parse. Android system components depend on each other and cannot be taken out easily. The cloud use leaves many system service threads alive and idle but taking up resources such as memory and scheduling overhead. In our Android cloud stack, we removed most of those handheld centric components to form a cloud essential framework, for example: PowerManager and BatteryService.

We enabled system and vendor read-only image sharing by using various container instances in a service node, which not only allows storage space savings but also enables much more efficient kernel page caching to improve performance. Application installations are also shared across all instances so that they're more easily managed. Most importantly, micro-architectural performance advantages are realized by using  a single copy of code, which saves instruction cache misses, TLB misses, and others while running multiple instances.

Cloud gaming is a disruptive factor in gaming, which the players with the right technology solution can use to their advantage. Intel is taking an overall ecosystem view of it, and ensuring that the whole supply chain can apply Intel technologies and offerings for their gains. A few years from now, the landscape of players in the gaming industry will have changed quite a bit. Having the right partnerships and technologies in place ensures sustained business advantages.

Performance varies by use, configuration and other factors. Learn more at Performance Index​​.

Performance results are based on testing as of dates shown in configurations and may not reflect all publicly available ​updates. See backup for configuration details. No product or component can be absolutely secure.