Cache Allocation Technology (CAT) provides benefits across a number of usages, as described in the previous article in this series. This article briefly describes one proof point from the data center (prioritizing a web server to improve its performance) and one from communications (protecting a key communications infrastructure virtual machine (VM)).

In order to demonstrate the benefits of Cache Monitoring Technology (CMT), Memory Bandwidth Monitoring (MBM), and CAT at higher levels of the software stack such as the orchestration layer, Intel collaborated with AppFormix, a cloud orchestration software company (http://www.AppFormix.com/Intel) to enable its software stack.

As shown below, “noisy neighbors” can be detected, and CAT can be used to contain them and restore the performance of a web server (in this case, the popular NGINX* web server). Figure 1 shows the test configuration. 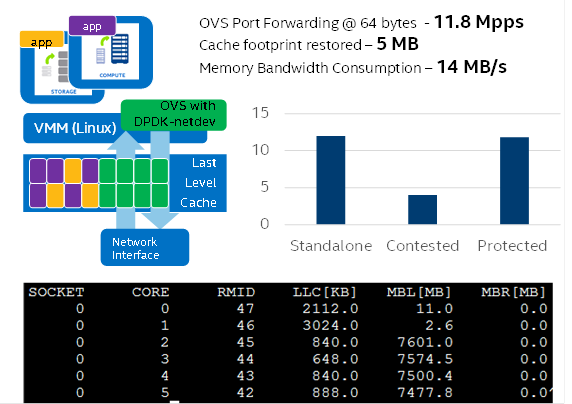 As a result of providing more cache to the web server, its performance increased substantially, over 27 percent, as shown in Figure 2.

This is one of many possible examples of applying CAT within the data center. Additional details on this test configuration, results, whitepapers, video testimonials, and more are available at http://AppFormix.com/Intel.

In another example a sensitive networking application (Open vSwitch*) can be protected using CAT. In cases without contention the port forwarding code can sustain ~12 Mpps. However with noisy neighbors the performance drops precipitously to only 4 Mpps due to contention. With CAT, however, the performance can be restored, as shown in Figure 3. This example is representative of many cases with sensitive networking applications running the data center and CAT can help ensure consistent performance.

This article provided a quick overview of a couple of CAT proof points, demonstrating benefit across data center and communications applications. The next article in this series includes discussion of software enabling collaterals available to help new users get started using the features.